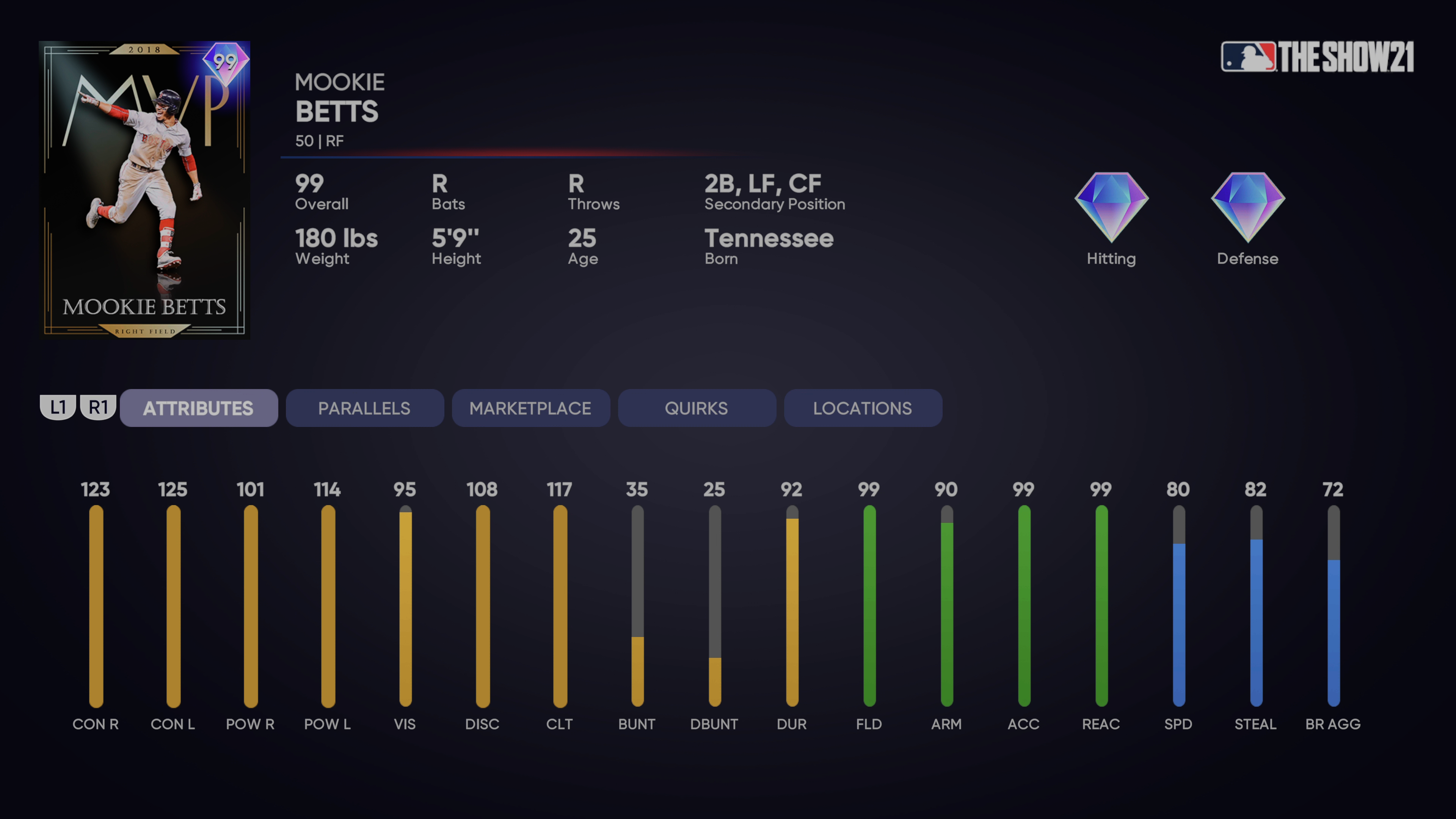 Get ready to spend major stubs if you want to get Awards Mookie Betts today in Diamond Dynasty. Going above and beyond the Mariano Rivera collection (as expected), it’s going to cost north of one million stubs if you’re starting from a rather low point with your collection. There are 15 collections you need to put together in order to get an absolutely stacked card. Let’s show off the card, then start gaming out some prices for some of the collections.

Perhaps the biggest downside in the short term is most of the best pitchers in the game are right handed. Betts has stacked stats from both sides of the plates, but you inherently give up that one built-in advantage in a lot of the high-end matchups for now. Beyond that, a player you pop into all three outfield positions or 2B is amazing. There is nothing to complain about with this card in terms of what he offers, and he’s easily one of the best three cards in the game right now.

However, let’s get to the collections and try to figure out some costs looking at the marketplace right now. 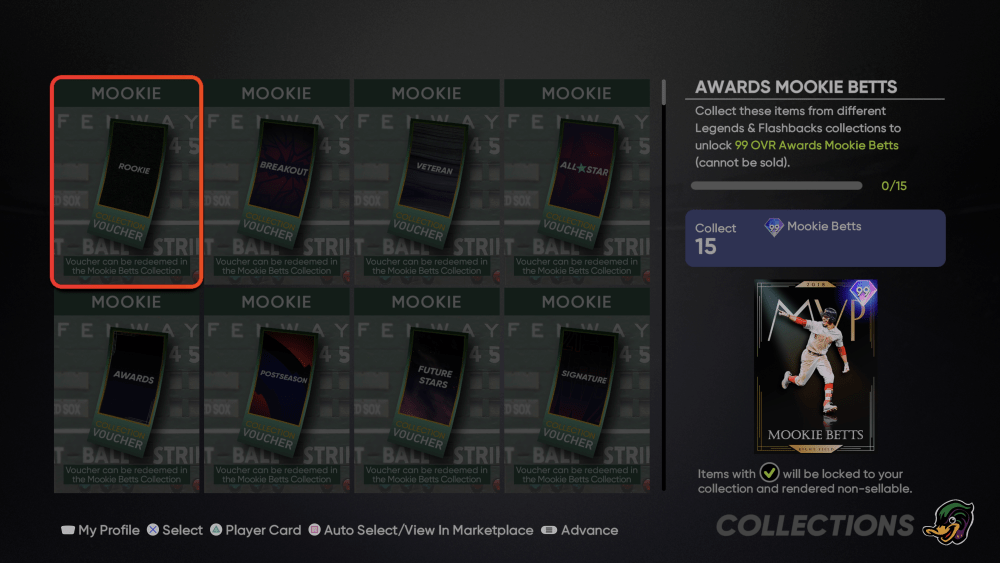 29 available, you need 25 for the collection

Three cards from Team Affinity, one from Daily Missions, everything else can be purchased. The purchasable cards push you towards 1.8 million stubs. If you picked all the right bosses and have all the BR and Ranked rewards, the cost drops to around 460K stubs. Finding the cheapest route leaving out the four most expensive cards gets you to around 1 million stubs.

Easier to talk about this one in terms of just what is available through playing:

Total cost of roughly 60-70K if you can do all the free program rewards.

Again, easier to talk about this in terms of what’s left after you grind.

Total cost of roughly 15-18K if you got all the free cards.

The Prime Joe Nathan from the Daily Missions program will push this to 17.

Taking out the two free cards and the upcoming Nathan card, that means you need 9 other cards. The cost will be about 340K.

Taking out the five most expensive cards, this will run you about 685K.

Andrew McCutchen and Justin Turner will be available this month in the Daily Moments program to add two more here.

About 465K if you don’t wait for the two new cards to come out. If you do wait, that takes off another lump and takes you to around 320K.

You need 80 of these cards, you can get them all from the Topps Now Moments or Monthly Awards programs.

You cannot currently do this collection, but after Thursday when the new program comes out you will be able to do it. Again, this one is no cost.

Roughly 160K if you pick the cheapest leftover cards.

You’re also getting two more rookie cards from the Daily Missions program this month. You get a Pujols card from the first big Conquest map. All in all, the prices here are negligible.

If you have not been collecting old silvers and golds this gets more pricey, but a lot of these cards are in the Battle Royale track every month. I would ballpark this at 30K if you’re way behind.

There are 31 cards available, you need 25

Again, you should have some from old collections and many are on the Battle Royale track every month. I would ballpark this at 50K or so if you are really behind on it.

If you have been keeping up with Battle Royale and your programs, you should only need 7-10 more cards. It should cost about 5-8K per card that you still need.

Same deal as some of the other ones here. You should only need 5-10 cards if you have been keeping up on the free content. They go for about 4-8K per card.

Taking out the five most expensive cards, you need about 280-300K stubs.

The 42 Series costs about 300K, but you should have a couple cards already so it’s probably closer to 240K.

Collecting the leftover 2021 All-Star and Home Run Derby cards is going to run you north of 1.2 million stubs. All in all, the collection is going to run you well over 2 million stubs on the conservative end of things if you have not been keeping up with collections. Awards Mookie Betts — or any other card — is generally not going to be worth that, but it sort of depends how much you have been banking cards to this point. You have to wait until after Thursday to do the collection, and in reality this collection could cost over 3 million stubs if you’re starting from a really low spot cards wise.