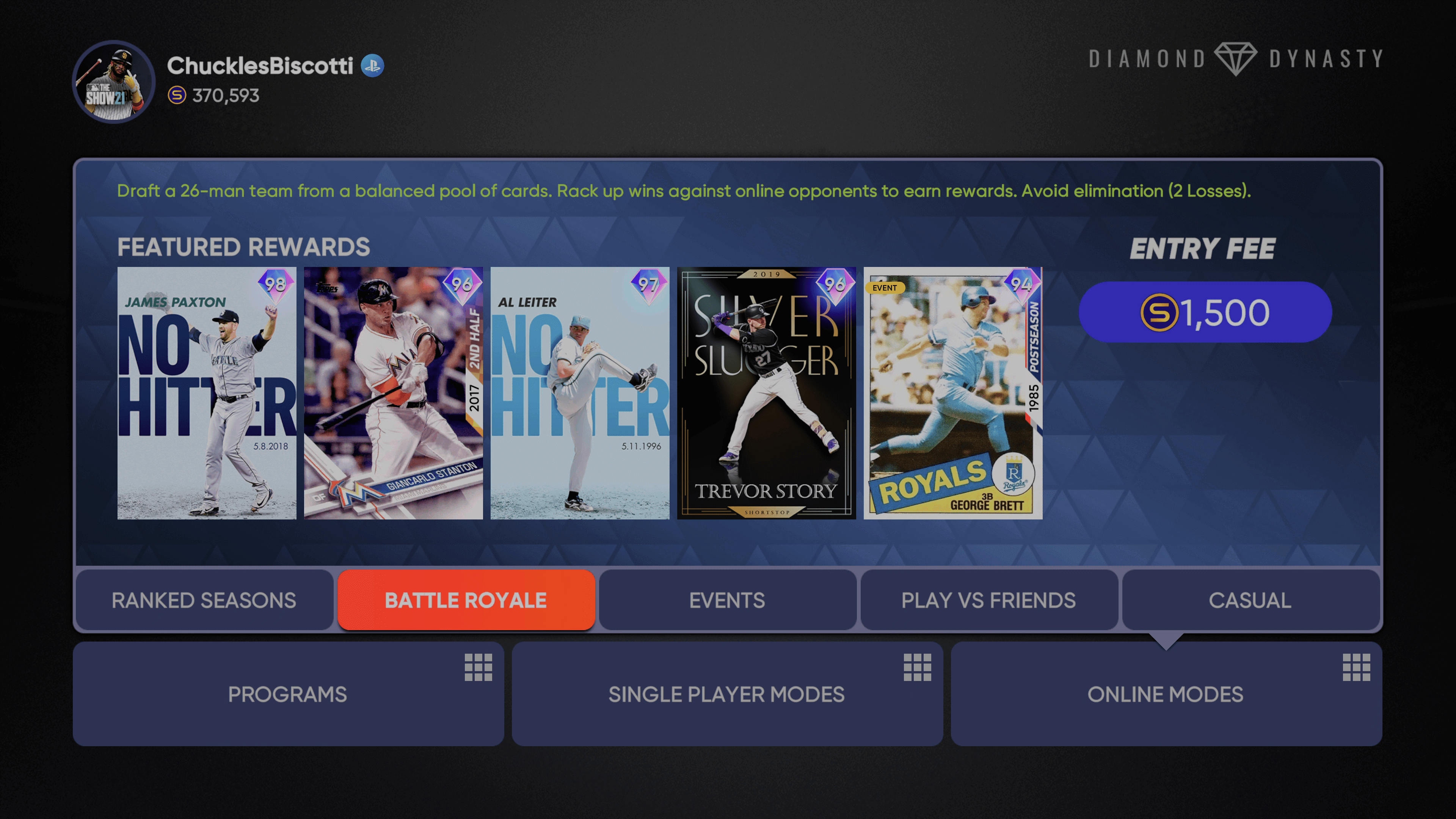 Battle Royale Season 4 begins in earnest today in MLB The Show 21 Diamond Dynasty. The two newest top rewards added to the pool of 12-0 players include Milestone James Paxton and 2nd Half Heroes Giancarlo Stanton. BR rewards are the de-facto ones to chase these days as the programs are very fair, and even if you can’t ever go 12-0, you can absolutely get all the best rewards with some time and patience.

James Paxton is probably best known for his Lightning card in a prior Show, but there’s no doubt he’s a threat on the mound. I would imagine he will be the latest meta SP, but Stanton should not be overlooked because his swing is always a delight. You couple that with big-time power stats and he’s a worthy card to chase as well.

Let’s cover all the new silver, gold, and diamond players, plus let’s go over all the other new rewards you can snag along the way.

You can also acquire all these players in The Show marketplace.

When I look through this rewards program, I do think Paxton is going to stand above the rest when it comes to resale value. He has 99 break on the 4-seam and cutter, and he has plus-plus control of the 4-seam, knuckle-curve, and cutter. He still can throw in a solid changeup and sinker to mix it up as well. His fastball speeds might not be as dominant as they have been in the past, but it’s not like it won’t be coming in with zip.

However, Stanton is going to be my pick because there are very few swings I like more than Stanton’s. He has maxed power against LHP and RHP, so I’ll live with the 56 vision and go from there. His arm maybe isn’t as strong as I would hope in the outfield as the other potential negative. I could also beg for a couple more quirks if I were feeling greedy.

Matt Harvey should probably not be overlooked either. He is going to be able to throw all five of his pitches effectively, which is a nice added bonus. He has a very traditional pitch mix, but that’s fine when the ratings are as good as they are here.

When it comes to the silvers and golds, I can say with some level of pride that the silver George Springer card has been used very effectively in the past by me. He has been part of many silver squads of mine that ended with rage quits by my opponents online. Having the Rookie Chris Sale out of the bullpen is an old classic as well that can be utilized effectively.

I do not have as much goodwill with the classic golds, but Kole Calhoun and Matt Carpenter have been used by me in the past with great success. I don’t think it was these two versions I used a lot in prior years, but their swings are what I focus on here, and both are solid.

In short, this is a really good program, and I do think it’s the best top-end rewards so far if I also factor in the Harvey card as the penultimate reward. Lastly, the missions are even “easier” this season with some of the stat missions being modified or just made less daunting.