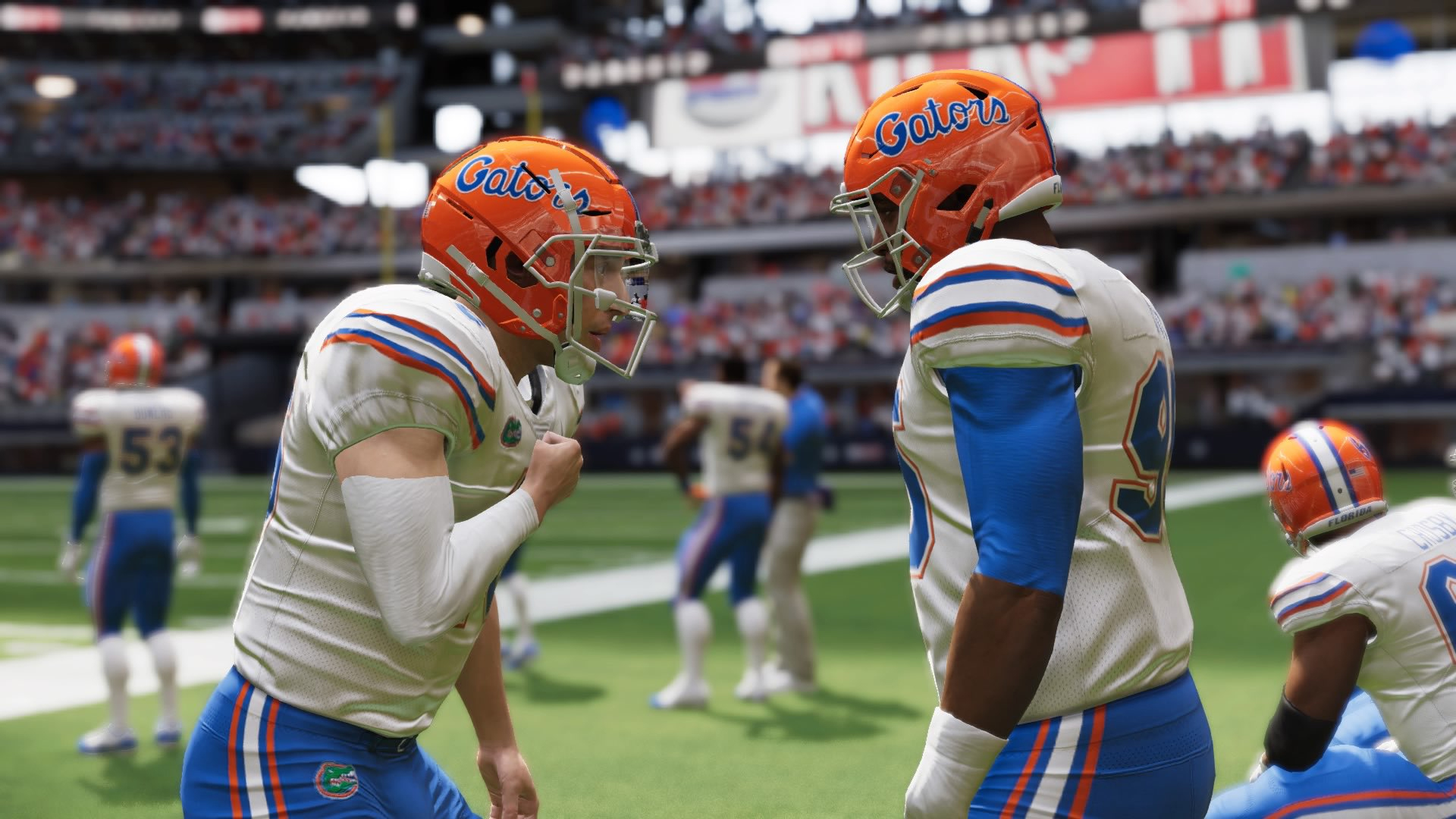 Over the last couple weeks, we have been taking a bunch of current-gen sports game and putting them into the next gen. We did Madden, NHL, FIFA and PES, but all those games are real and tangible in some way. However, we then went into what-if territory with a next-gen College Hoops 2K, and now I plan to look at a franchise we all hope and pray comes back in the form of next-gen NCAA Football.

NCAA Football 2002 was only on PlayStation consoles. So for the sake of this article, I will skip the 2002 bare-bones version on the PlayStation 2 and instead take a look at next year’s installment when EA released its beloved NCAA Football video game on the PS2, Xbox and GameCube.

For those that remember playing NCAA Football from its early days, you may remember this game had Oregon QB Joey Harrington on the cover. That year’s big features were the 144 teams, enhanced dynasty mode, create-a-school and 3-D cheerleaders.

I had this game for GameCube. And while that was a very long time ago, I remember feeling the excitement as the game transitioned from the PS1 to the PS2 era. Besides a graphical overhaul, there wasn’t much of a noticeable difference in the early transitions from current to next-gen. I thoroughly enjoyed the enhanced dynasty mode and the beginnings of a real 3-D era that was starting to come alive.

During the five years before NCAA Football transitioned to the PlayStation 3 and Xbox 360, EA added revolutionary game modes such as Race for the Heisman — in addition to some smaller features like Turn the Tide, home-field advantages, and a College Classic Mode. NCAA was doing things right and gave sports fans everywhere the perfect change of pace or alternative to EA’s popular Maddenfranchise.

Obviously, there was also a graphical shift, as you would expect from one system to the next. But overall, this was a solid step into next gen at the time. Either way, without many of the game modes established during the PS2 and Xbox era, college football video games would have never made it to this point. Beyond that, there’s no denying that, much like the Madden series, the PS2 era was a more consistent and, well, better time for the series.

However, NCAA Football would slowly start to finds its footing as we approached the end of the console era.

If a series was going to go out, this was not a bad way to go about it. Much like ESPN NFL 2K5 or College Hoops 2K8, NCAA Football 14 left a good enough impression to live on to this day.

And while there weren’t a ton of paradigm shifting changes made in the years leading up to this game, there were enough refinements made to help the game live on well past its expiration date. This included things like a much simpler but smarter recruiting system, a TeamBuilder system that helped make it easier to share created schools online, and an online dynasty mode that allowed you to play with a bunch of your friends while tracking everything that happened on EA’s website.

EA did a great job tweaking things the fans already liked about NCAA Football. It would not be too hard to argue some of the PS2 NCAA Football games are more critically acclaimed and well remembered, but NCAA Football 14 is the last of its kind. The last truly excellent college football video game.

I don’t think anyone would argue that’s why the series is missed so much. It was the last of its kind — at least for now.

What To Expect From Next-Gen NCAA Football?

This question is much harder to answer because we haven’t had the luxury of playing an NCAA Football game in quite some time. But with Madden continuing to shed a little bit of light on what a next-gen college football game may at least look like with game modes like QB1 and Face of the Franchise, we do have some clues. But let’s be honest, those things still play more like Madden, and there was always something about NCAA Football that just felt different. I don’t know if that is because I’m old-school, and I remember NCAA feeling a bit more wide-open than Madden, but it just felt different in the same way the real game looks and feels when you compare Saturdays to Sundays.

Over the years, sports games have added an insane amount of creative options. So whether that means being able to scan your face into Heisman and dynasty mode or just having tons of customization options at your disposal, this would be something EA would need to implement here as well. Obviously, adjusting to the times with divisions, playoff systems and other aspects that have changed over the last decade in college football would be a must as well.

I also think, unlike what EA has done with Madden, adding more options to recruiting and dynasty mode would definitely have happened by now. But again, EA could absolutely just copy and paste what was in NCAA Football 14 and just update the graphics, rosters, conferences and we would have a pretty good starting point for a new game.

Again, EA could copy and paste NCAA Football 14 with updated graphics, players and other modifications to modernize the game, and most people would just be happy year one because we would have college football back. My biggest fear would be that EA would focus more on Ultimate Team and less on the modes that we’ve all come to know and love: Heisman and dynasty mode.

For now, you can only play NCAA Football 14 with updated rosters, which can be found here.

But when and if EA and the NCAA finally come to terms, fans will be ready and waiting for NCAA Football to come back. And no matter what year it is when that happens, a next-gen NCAA Football game would quickly rise to the top of every fan’s must-have list.

It may not be perfect when it finally does return, but it will be glorious.

GIVE ME WHAT I WANT EA! Give us what we all want: next-gen NCAA Football.