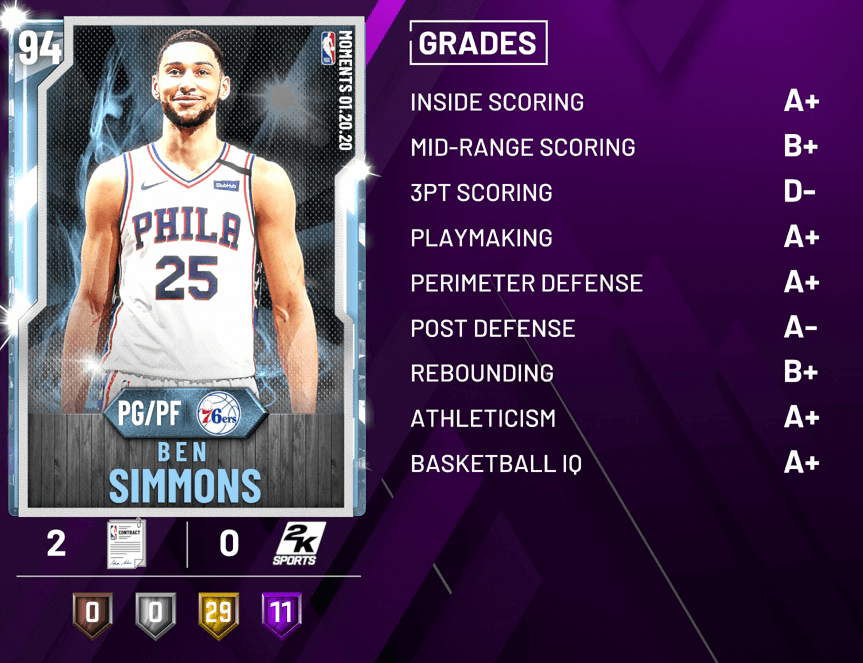 We’re back with a diamond Ben Simmons review, and a review for pink diamond Damian Lillard. If you just want the quick and dirty analysis, you can also go to this post. We also have reviews for the other four new Moments players in NBA 2K20 MyTeam here and here. 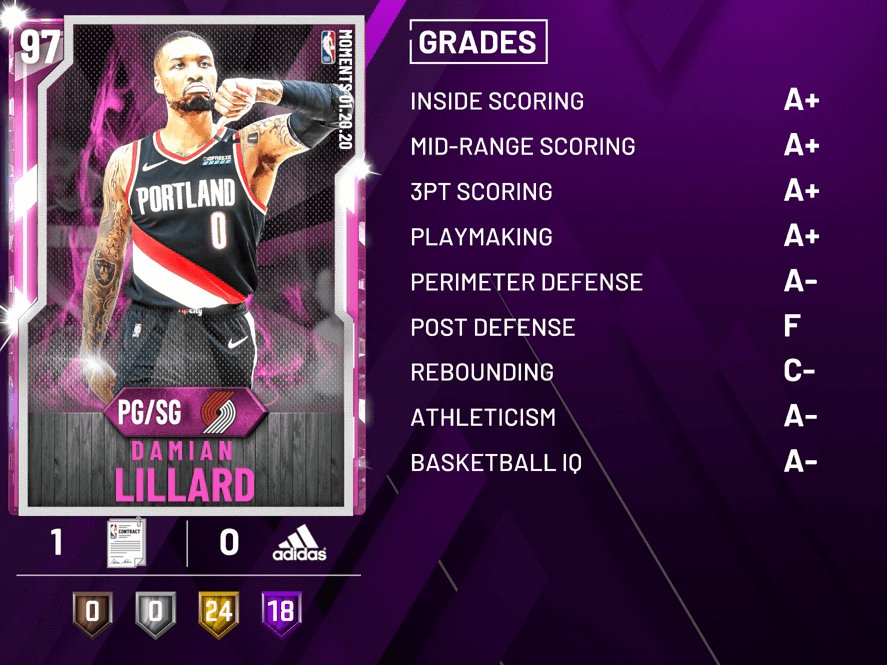 Analysis: Damian Lillard has been one of the more enjoyable players to use in NBA 2K for a couple years now. He’s never quite at the top of the meta, but there’s just something about shooting jumpers with him that feels good. He gives me a little extra confidence on shots, and I just feel like his shots are going to go in even when I don’t green with him. Luckily, he’s also easy to green with so it’s not like you have to worry about full whites etc. with him too often once you get his release down.

It also doesn’t hurt that one of the most meta moves (explosive behind the back) is something that Lillard sometimes pulls out in real life. So, in a sense, it doesn’t feel as cheesy to spam that move with him because at least he does it. The same goes for him shooting deep 3-pointers — it’s on brand for Dame.

His defense is still going to be an issue, especially if you off-ball a lot, but he’s workable now with gold Clamps. I also think it’s fine for Dame to have this weakness because, again, by default you’re going outside the meta a bit by picking him. Plus, he’s a bad defender in real life. The key is he’s fun to use, and he makes playing the game more enjoyable for me.

(Side note, I’m not sure why he gets 87 defensive rebounding, but I almost expected him to have some sort of rebound badge after first seeing that.)

Analysis: If we’re talking about meta, Ben Simmons both fits into it and doesn’t here. At 6-foot-10, he’s a little too tall in some respects due to his dribble moves. He also has bad outside shooting (obviously) so he’s got some shortcomings. Still, his Glitched card is amazing, and while this one is slightly below that, this is still an awesome card. Simmons also remains an interesting thought experiment because there’s still going to come a time where giants are running at PG. Whether that means Magic, Simmons, or maybe it’s a LeBron card, but we’re going to get to a point where almost everyone is running big guys at PG in MyTeam. It’s just the cycle of things, and it feels inevitable in some respects.

With that in mind, it’s worth keeping an eye on this card because he should not be too expensive for too long. If you want to make sure you get a big player who can at least guard other giants at PG, you may want to invest in him. There will be other giants at PG, and probably better Ben Simmons cards, but it never hurts to have one in your back pocket. I also think Simmons gets a card with HOF Clamps at some point, and if he does, that will be the one I cherish.

One final note on Simmons is his dual-position eligibility opens up extra avenues for him. He’s great as an interior and perimeter defender. His rebounding is good enough, and so he is a multipurpose weapon on defense, who then is a nightmare in the open court who dunks everything.