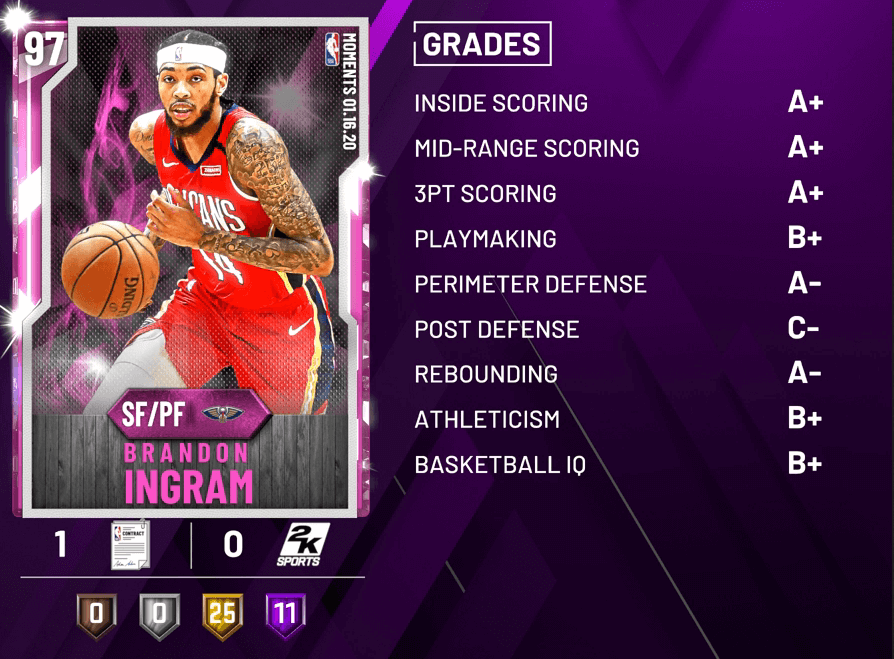 I’ve already talked about how it was a little surprising to get this four-pack of Moments cards, so let’s get right to a review for pink diamond Brandon Ingram, and a diamond Marcus Smart review.

Analysis: This is the first new Ingram card we have received since Moments of the Week 1 Ingram. He goes from an amethyst to a pink diamond. I do not like his shot release, but I don’t think it’s a broken shot or anything. Rather, the timing just feels off for me. Either way, he does have a quick release and his shooting stats are solid overall. For a pink diamond, he does not get amazing HOF shooting badges, but he does get Quick First Step at the very least. He’s quick off the bounce, and at 6-foot-9 he’ll work well at SF as a potential matchup problem.

However, to be blunt, I don’t think he’s elite if we’re grading him against other pink diamonds. He will be a good playmaker, he has hot zones all over the place and he’s going to be solid on defense. But that’s not enough for a PD to stand out here in January. He also feels a little slow with the ball. Plus, it’s also one of those things where if he continues to score in bunches in real life, he’s a classic player who 2K will give even better updates to in the coming months regardless of how the Pelicans end up doing. 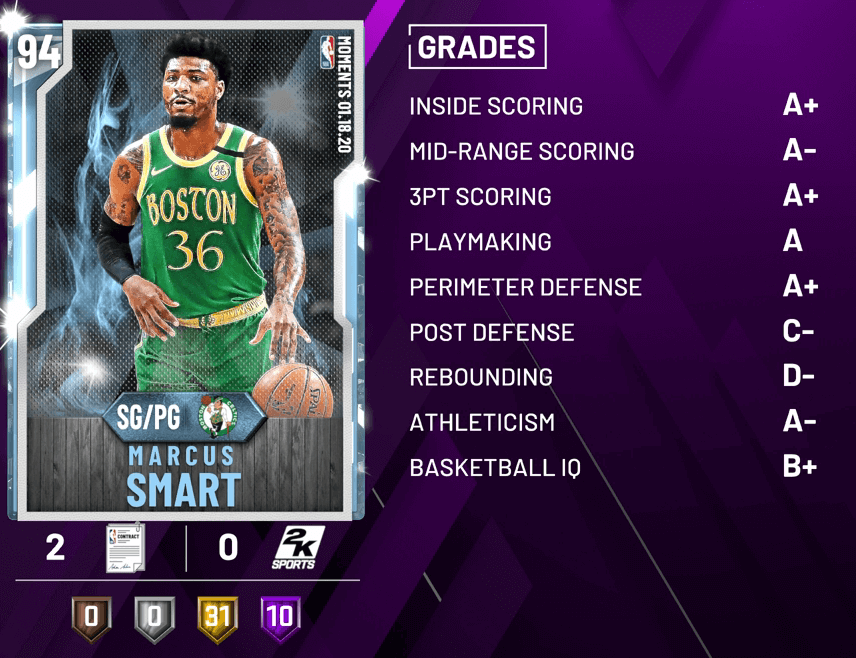 Analysis: This is the first new Marcus Smart card we have received this year, and I’m a little bummed because I think the secret will get out about him now. He has one of my favorite jumpers this year, and I’ve used his emerald card in a ton of high-leverage spots because I have that much faith in him (and Jaylen Brown since I’m already mentioning Celtics players). He retains that same great shot, and he adds to it with a bunch of other goodies.

First off, he’s going to be great on defense, which is expected. With HOF Clamps, he’s off to a great start, and he has great base attributes on top of that. He’s a pest and a nuisance, and he’s the exact sort of player you need at the point of attack. He’s also 6-foot-3 so he’s mostly best used at PG. In terms of shooting, he’s just very easy to green. It’s a quick shot, but it’s a shot that makes sense and is easy to read. He’s also going to be secure enough with the ball and has good enough speed. Overall, Smart is a diamond who can play above that tier, and so here’s to hoping he’s cheap enough to get onto your squad.