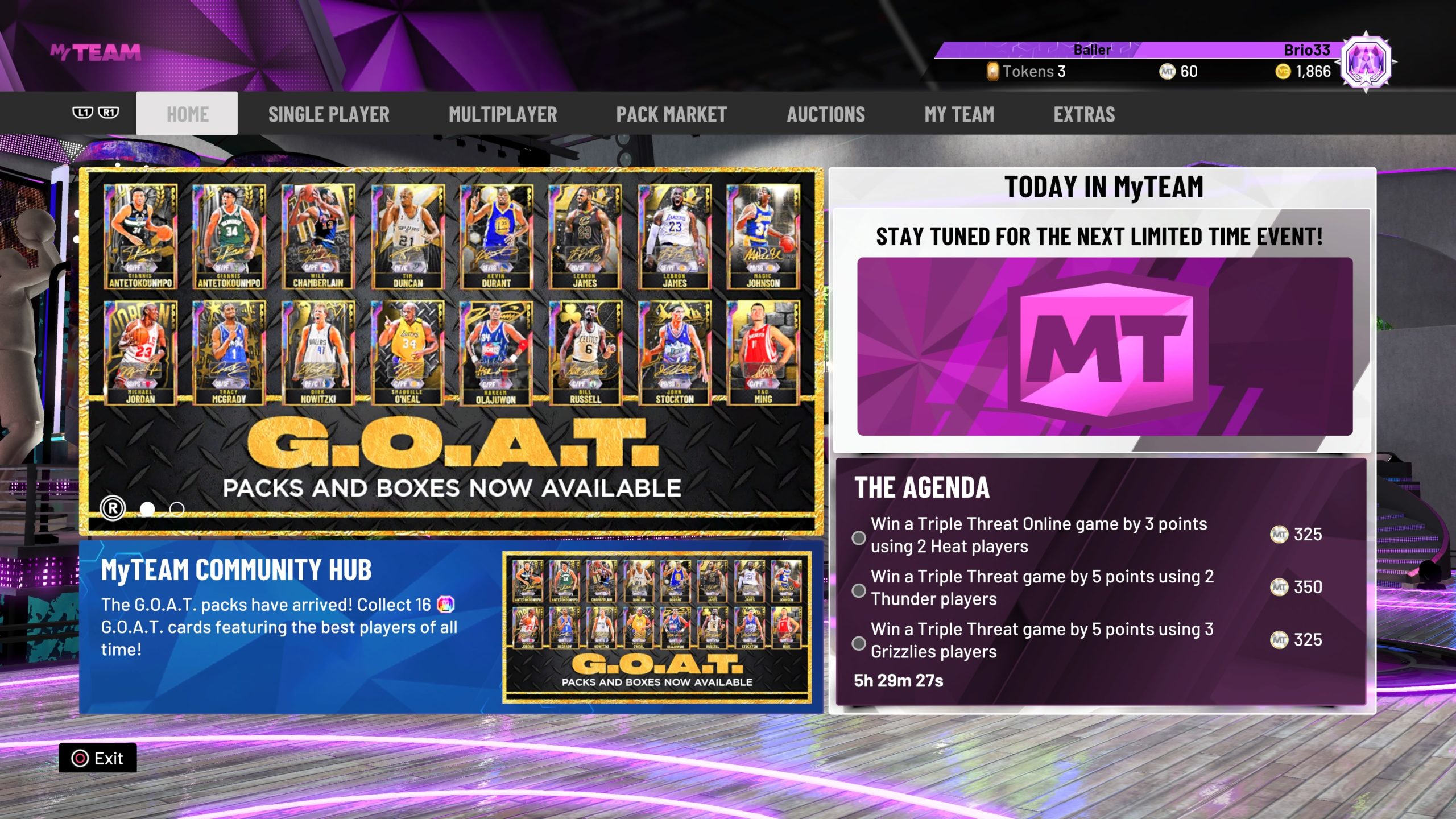 2K20 has been an interesting year for MyTeam. There were new and exciting innovations, but also plenty of the same old problems. Is 2K20 in the conversation for best MyTeam ever? I don’t know if I’d go that far, but I definitely had a great time.

Right now, though (for me at least), it’s over (new game comes out this week!). Here’s my final lineup, not necessarily of my best cards, but definitely my favorites. 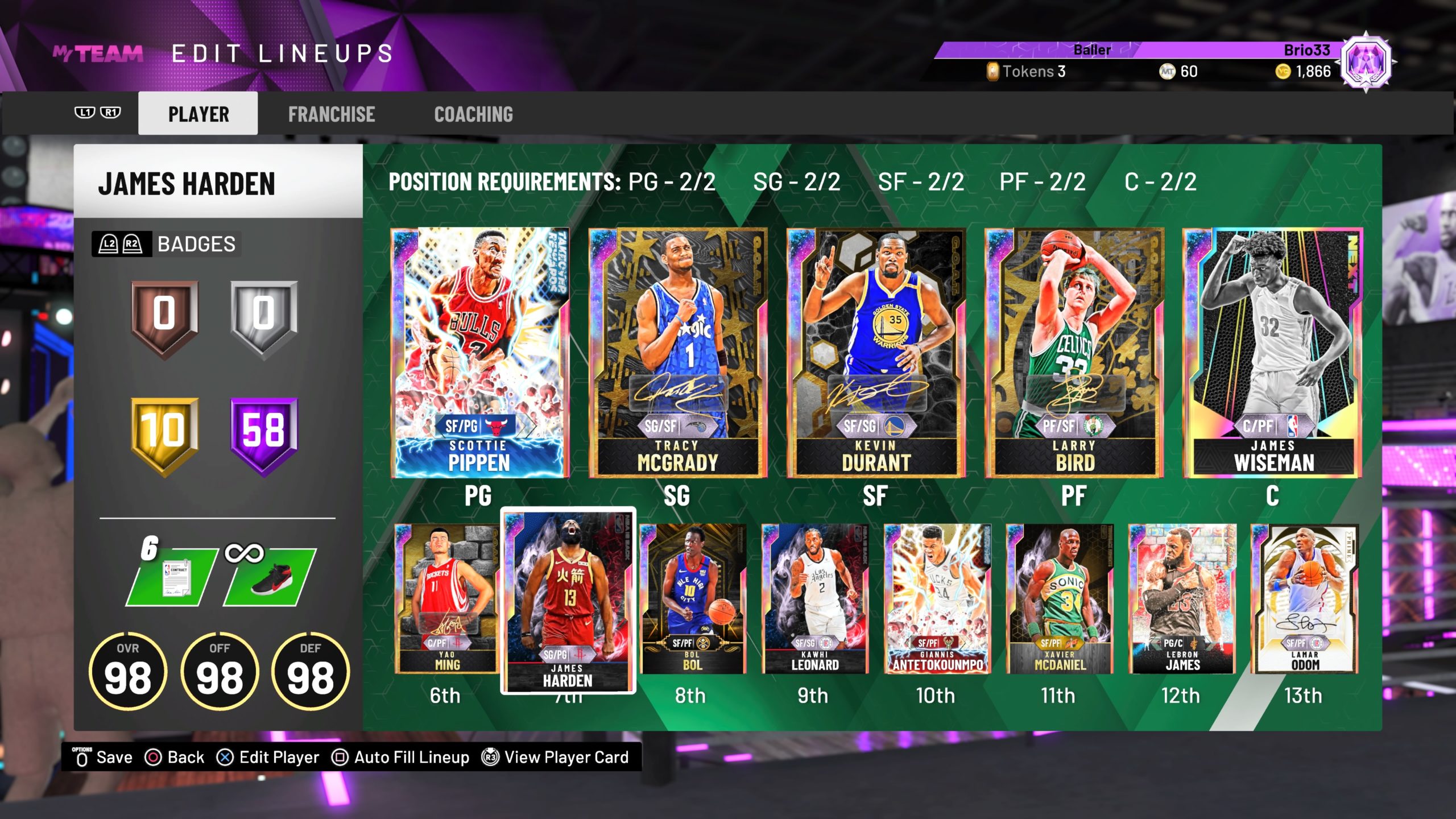 I tried to streeeeeetch out the completion of my personal goals within the mode (unlocking the Kobe and Steph G.O.A.T. cards, for example) to better bridge the gap to 2K21 (and possibly beyond, just in case current-gen 2K21 isn’t worth it). But unfortunately, I’ve reached that point where my excitement for the new game eclipses the fun I have had playing the old one.

Sure, the launch of 2K21 is only a couple of days away (my Mamba Forever edition is pre-downloading now), so that gap I spoke of is a short one this year. But I was still hoping that the allure of trying out all of my new opals and G.O.A.T. cards would keep me invested in 2K20 a bit longer. Over the past week, I spent all of my MT and tokens, and sold everything I didn’t care about. As prices (and interest) dropped across the board, I went in and picked up just about every card I ever wanted to try this year.

But it’s not enough.

Sorry opal Scottie and Jonathan Isaacs. Sorry G.O.A.T. KD and T-Mac. Sorry dramatically overpriced NBA is Back opal Kawhi. And sorry Kobe, I especially feel like I let you down. At least I’ll be getting a sapphire evolution card of you on Thursday night at midnight. 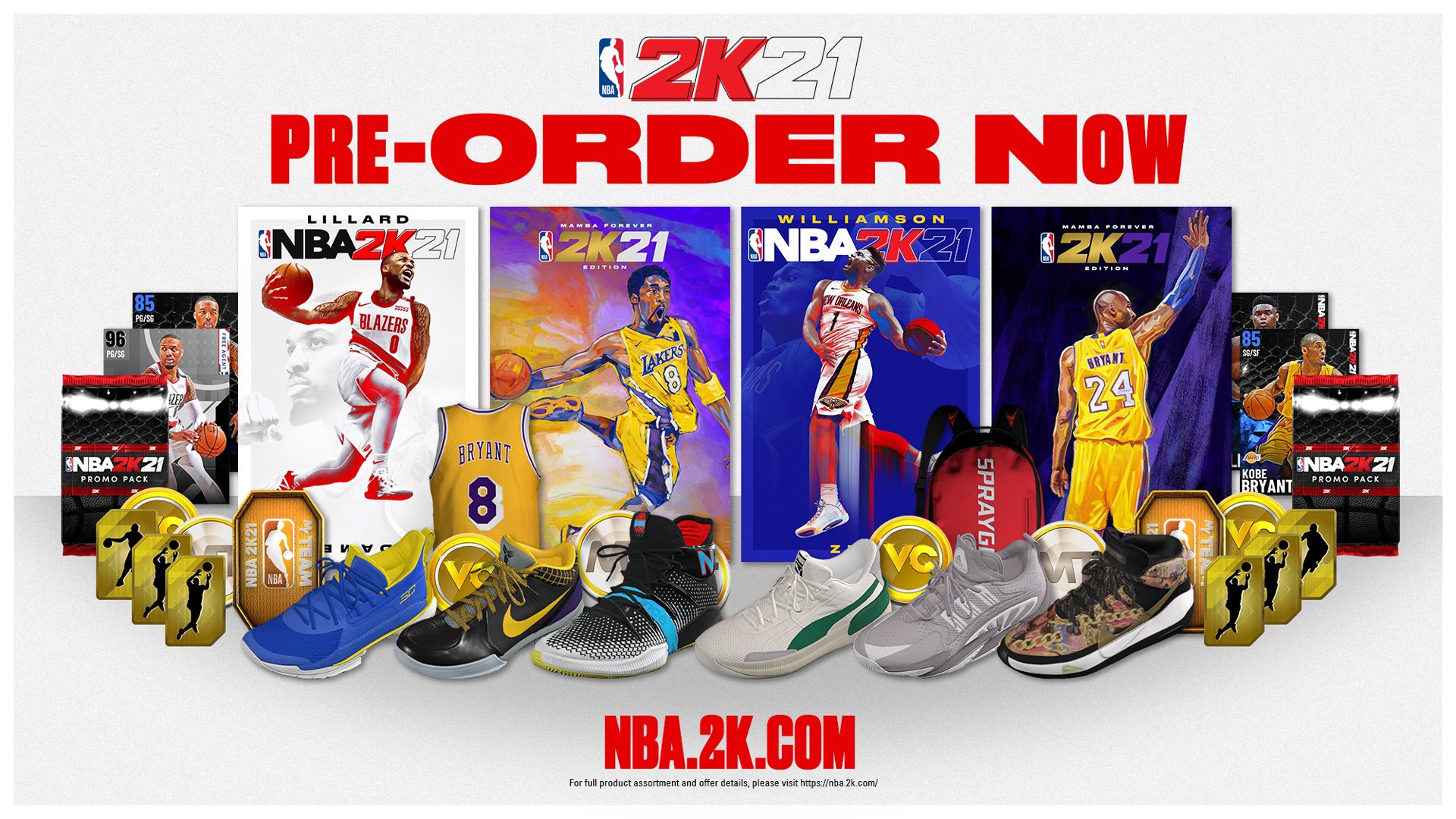 Oh yes, the grind is about get real again.

We’ll soon be paying silly prices for sapphires and rubies, and an amethyst current player pull will feel like a G.O.A.T. opal point guard Giannis pull. Objectively, it’s insane to go back to that, but at the same time I’m looking forward to the challenge.

My 2K20 squad is too good now, and there are just too many great cards to choose from because they’re all overpowered. (I still can’t believe I picked up G.O.A.T. cards for discard value this year.) It frankly got kind of boring. But it’ll be fun to go back to the beginning — to having limited resources and cautiously analyzing each card to try and find a budget beast to carry my team. What will the token reward cards be? How will the roster requirements of Limited impact the auction house? What lengths will I have to go to acquire this pink diamond Ralph Sampson? 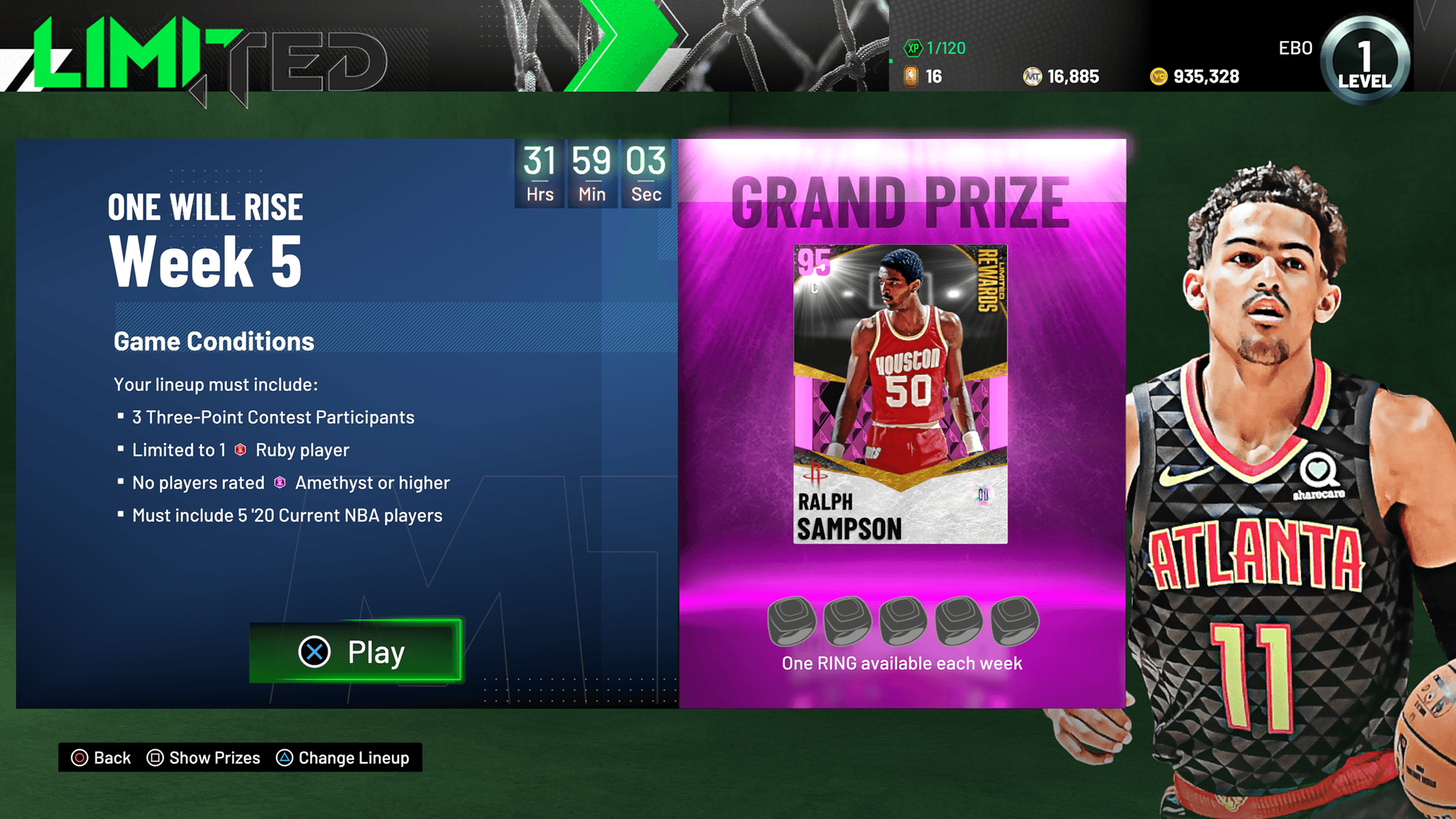 Again, it’s crazy, because I currently have an opal Sampson in 2K20 that I didn’t get to use all that much. Mere days after opal Ralph came out, he wasn’t the best center in my collection anymore. And now at the end, he didn’t even make my final squad.

If only we could carry over cards (even just ONE card of our choosing), or at least MT or tokens, from one year to the next. That would be awesome, right? Despite all that, however, I’m still excited for Thursday night because the strategy of building my new team from scratch is intoxicating. The hours are moving too slowly, and I’m trying to keep myself busy to keep from getting antsy.

So, as I leave 2K20 behind, I’d like to shout out some of my favorite things from the year. Starting with —

2K20 had more cards than I can ever remember being in an iteration of MyTeam. So many different theme sets, and reward cards and locker code cards to choose from that it really made for a fun year of collecting and lineup building. My favorite cards from the year are G.O.A.T. Kevin Durant and Yao Ming, token reward opal Bol Bol and Prime Series 3 opal Lamar Odom.

Lamar especially carried me for months, and won a ton of games for me. I sincerely hope he’s back in 2K21.

In years past, I framed my time in MyTeam around working through the Domination ladder. This year, it was all about the Sim challenges and their rewards. Sure, there was lots of other fun to be had in modes like Triple Threat, but once that first batch of Spotlight Sims dropped with the James Harden opal reward, I surrendered myself completely to MyTeam. Sorry MyLeague, and sorry (not sorry) MyCareer, which I fully intended to dive into at some point but never did.

And the first Spotlight Sims came out around the same time that quarantining became a way of life instead of just a short-term annoyance. I’ll never forget the morning when all of those reward cards dropped on 2kmtcentral.com, and it was clear something special was happening but no one knew exactly what. It was like Christmas in March.

I can’t wait to find out what 2K has in store for the offline challenges this upcoming year. Here’s hoping they expand on what they built in 2K20 with even more rewards and fun ways to earn them.

Evolution cards were a game-changing concept that added new layers to MyTeam from day 1. They were definitely too difficult and time consuming at the beginning of the year, but 2K definitely learned and adapted as the year went along. Based on that developer blog, it sounds like the concept will continue to evolve (pun intended) next year with the branching tiers.

I also look back fondly on the moment they first dropped evolution packs in 2K20, and I realized that they could go back and add evolutions to older cards. Like I said, game changing.

And overall, MyTeam itself has been evolving these past few years in (mostly) a positive direction. I started playing around with it in 2K15, and now it’s my game mode of choice. I guess that means they’re definitely doing something right. 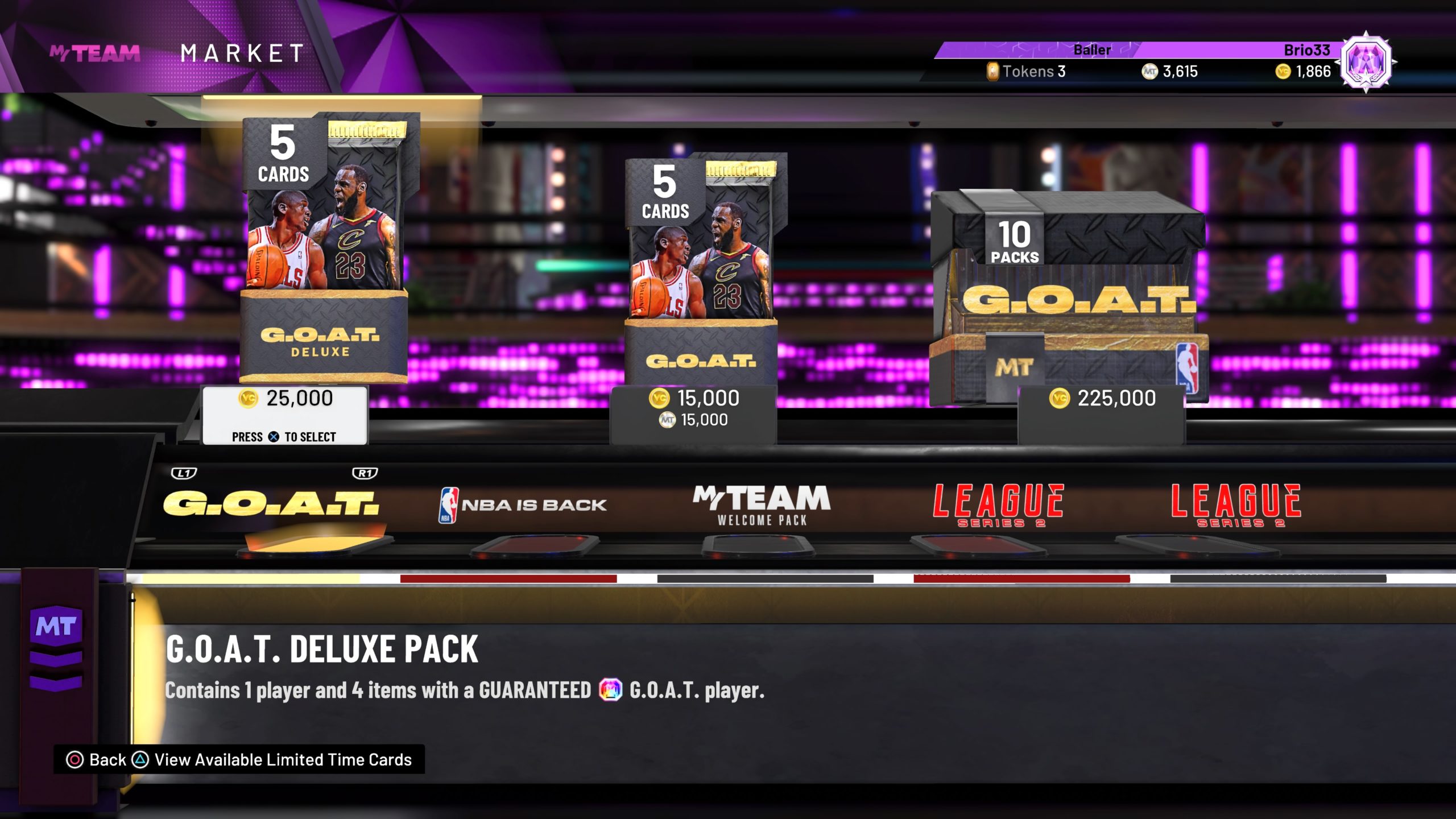 Now, I thought about also going through and listing my least-favorite things from 2K20, but really I think there’s only one issue worth mentioning as we start a new game cycle.

Every year I say I’m going to go No Money Spent, and every year I get caught up in the hype and buy VC to try and get whatever the shiny new cards are. But I never actually get those cards because packs odds are terrible and it’s basically a scam.

If we all stopped spending the money, 2K would have to adapt their practices and maybe we wouldn’t get screwed over with terrible pack odds and silly position-locked cards (“OMG, it’s a point guard LeBron!!!”), etc. But we can’t stop, can we? I’m just as guilty as anyone as I easily dropped a grand this year (maybe more, I honestly lost count). Every time I bought VC, there was that sweet tinge of adrenaline and excitement when a pack opens and the cards are about to flip.

But that usually (and quickly) turned to regret. Even if a 20-pack box had the one card I wanted, the 19 other horrible packs left a bad taste in my mouth every single time.

I think that tinge of excitement, though, is exactly why I (we) do it. Just the chance of pulling something amazing is addictive, even though we know deep down that it’s not smart, and it’s not going to work out the way we want. And that’s the definition of gambling my friends.

I’m at least a grown man who makes my own money and is fully aware of the insanity of it all. It’s irritating, sure, to be disappointed by packs, but it’s not like I’m choosing VC over paying rent or buying food.

There are, however, a ton of kids who play this game, and they surely are developing really bad habits because of it. So what’s the solution? Obviously, 2K makes a lot of money off microtransactions, so VC won’t go away. 2K even posts pack odds, so I guess from a legal standpoint they’re covered. And so many people have enough disposable income that it’s not like we’ll ever collectively boycott VC and freeze them out. Oh, and despite the negativity, I doubt our government would ever actually step in and ban microtransactions completely at this juncture.

I certainly don’t have any answers, and I know I’m not saying anything new here, but I do think it’s good to keep the issue top-of-mind as we get ready for a new year of MyTeam. Maybe, like with a New Year’s resolution, some people (like myself) will try and do better. It’s easier somehow when there’s a clean slate.

I do have another thought, though, that maybe could provide a tinge of hope for the future.

What if NBA Live comes back stronger than ever in this next generation of gaming? Or if not NBA Live, maybe another game. And what if there is a MyTeam competitor that didn’t completely rely on microtransactions to be fun? It wouldn’t even have to be a basketball game. I think if any sports game came along and successfully figured out a way to evolve the card collecting mode without ripping off customers, it would be praised to the high heavens.

So my hope is that if someone else takes that leap over the next decade and does things the right way, maybe 2K would have to follow. 2K has been on the mountaintop for far too long, and they probably need to look over their shoulder and see someone back in the race again. That tinge of fear would be good for the game overall.

But until such a miracle takes place, I’ll be there on Thursday night with the rest of you. I’m going to try my best, though, to keep my wallet closed this year.🤞

Discussion
Click here to reply to the discussion
Continue Reading
You may also like...
Related Topics:NBA 2K20, nba 2k20 myteam