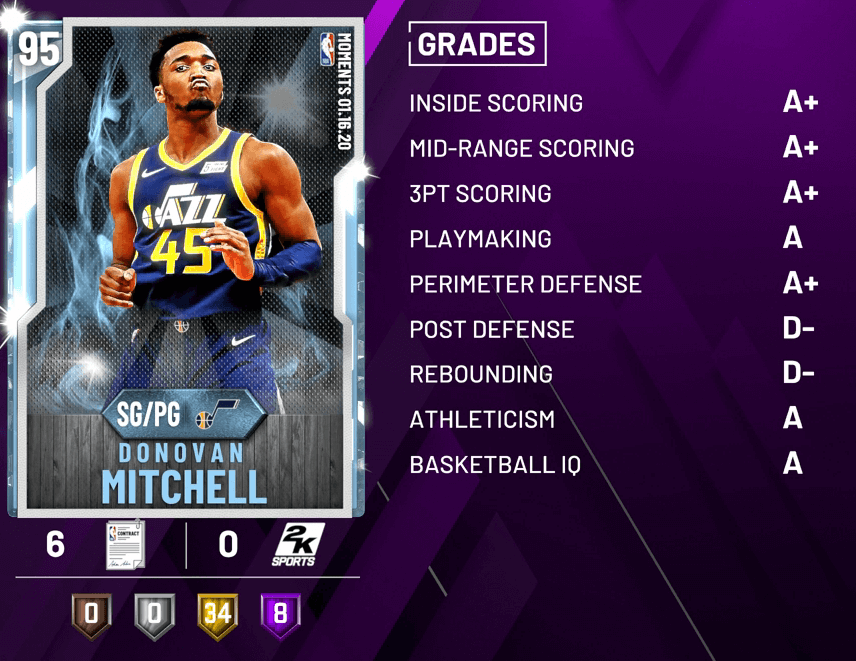 I covered pink diamond Brandon Ingram and diamond Marcus Smart in the last set of reviews, so let’s get to diamond Donovan Mitchell and amethyst Domantas Sabonis below.

Analysis: Mitchell already has a diamond card courtesy of Moments of the Week 5. This card is +2 overall in comparison to that one, but I don’t think it represents a massive change over that card. Both of them have dual-position flexibility, and the biggest change here with the badges is he gets HOF Quick First Step. Now, that’s obviously a great badge to have in HOF form, but you’ll have to weight the cost of each card. The Moments of the Week 5 card can be rather expensive, so this card could end up worth it for that reason alone. Still, that would more be the marketplace dictating things rather than a massive change in how Mitchell plays in this 95 overall form.

Another concerning part about this card is his playmaking badges are really lacking. He does not have Unpluckable, and overall he just doesn’t seem strong enough with the ball as a point guard to carry your team. He’s only 6-foot-3, so I only really feel great putting him at PG in the MyTeam environment. I love shooting with him, and I think he’s really close to Smart in terms of an easy and repeatable jumper, but Smart is more well rounded.

I won’t blame any Mitchell fans who want to get a new card of his while he’s on a nice run in real life, but I think you’re going to get better versions of him than this 95 overall. 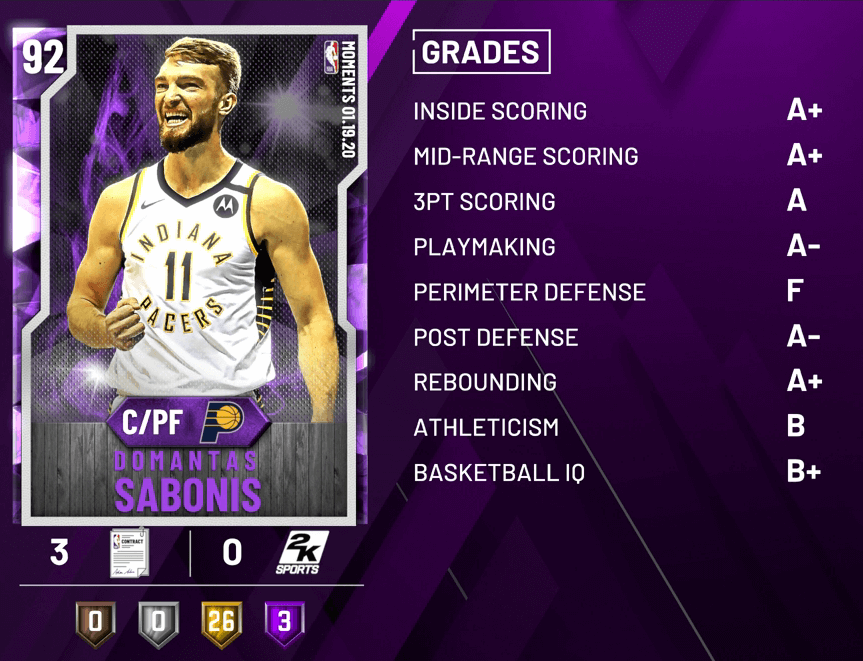 Analysis: This is the first new Sabonis card we have received since his Ruby for Moments of the Week 3. It is a noticeable upgrade over that card, but it does not betray who Sabonis is as a player. What I mean is this isn’t 2K taking massive liberties with his player type, just some slight exaggerations of his shooting and a couple other little things. In other words, it still plays mostly like you would expect Sabonis to play in virtual form.

His shooting is perfectly adequate, but I do not love his shot release. He’s great in the post, but you don’t really want to play him at center so that hurts as well. He’s 6-foot-11 so he could have some mismatches at PF, but the concern on the other end will be his speed and weak defensive numbers. That being said, Sabonis just vacuums up rebounds. He’s someone who for whatever reason tends to play above his ratings and is a true pest to box out.

All in all, I think he has some value as a budget option in the coming days. This is especially true if you want an offense-first change of pace who can beat up some smaller power forwards in the post and on the glass.

NBA 2K20 MyTeam: Moments Reviews for Brandon Ingram and Marcus Smart
It Came From the Forums: Do HOF Badges and Badge Stacking Need to Go in NBA 2K?