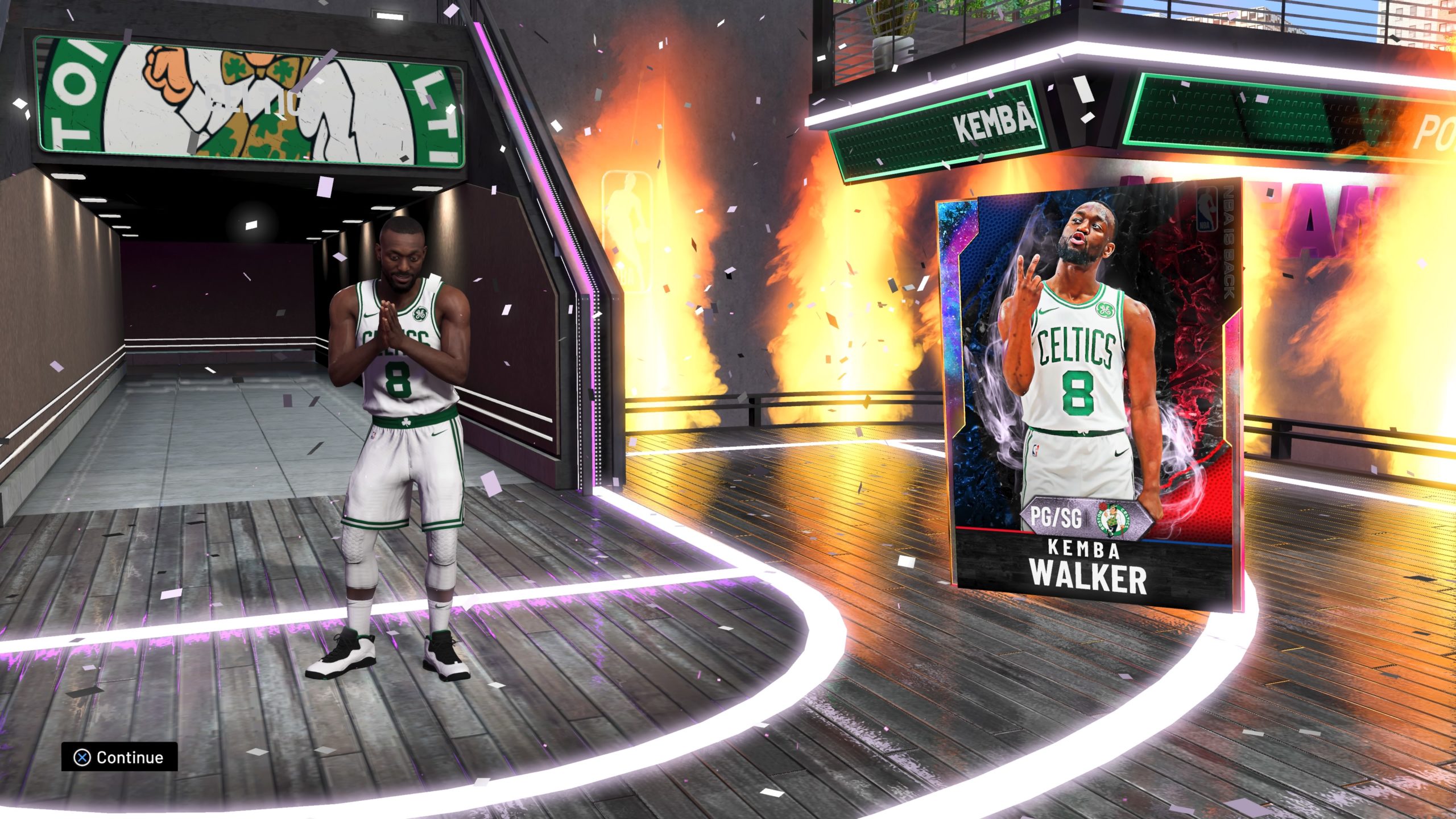 The last couple of years, MyTeam ended as the calendar turned to August. Initially, most people (myself included) thought 2K20 would have a similar expiration date.

Overall, I’ve felt like Throwback Moments were a bit underwhelming, but now I’m going to have to change my tune. In that last drop, which they kind of hid in the Super Packs for some reason, 2K blessed us with a loaded pink diamond Chandler Parsons! That’s easily the best card he’s ever gotten in MyTeam, but since he was stuck behind a VC only paywall, I had to pay through the roof for him. But I will happily drop 50K MT at the end of July for a pink diamond player that maybe five people on the planet (including me, and presumably Chandler himself) care about using.

Unfortunately though, another player I wanted, Xavier McDaniel (who had a fantastic amethyst way back in the beginning of the year), was going for an insane amount of MT on the auction house. 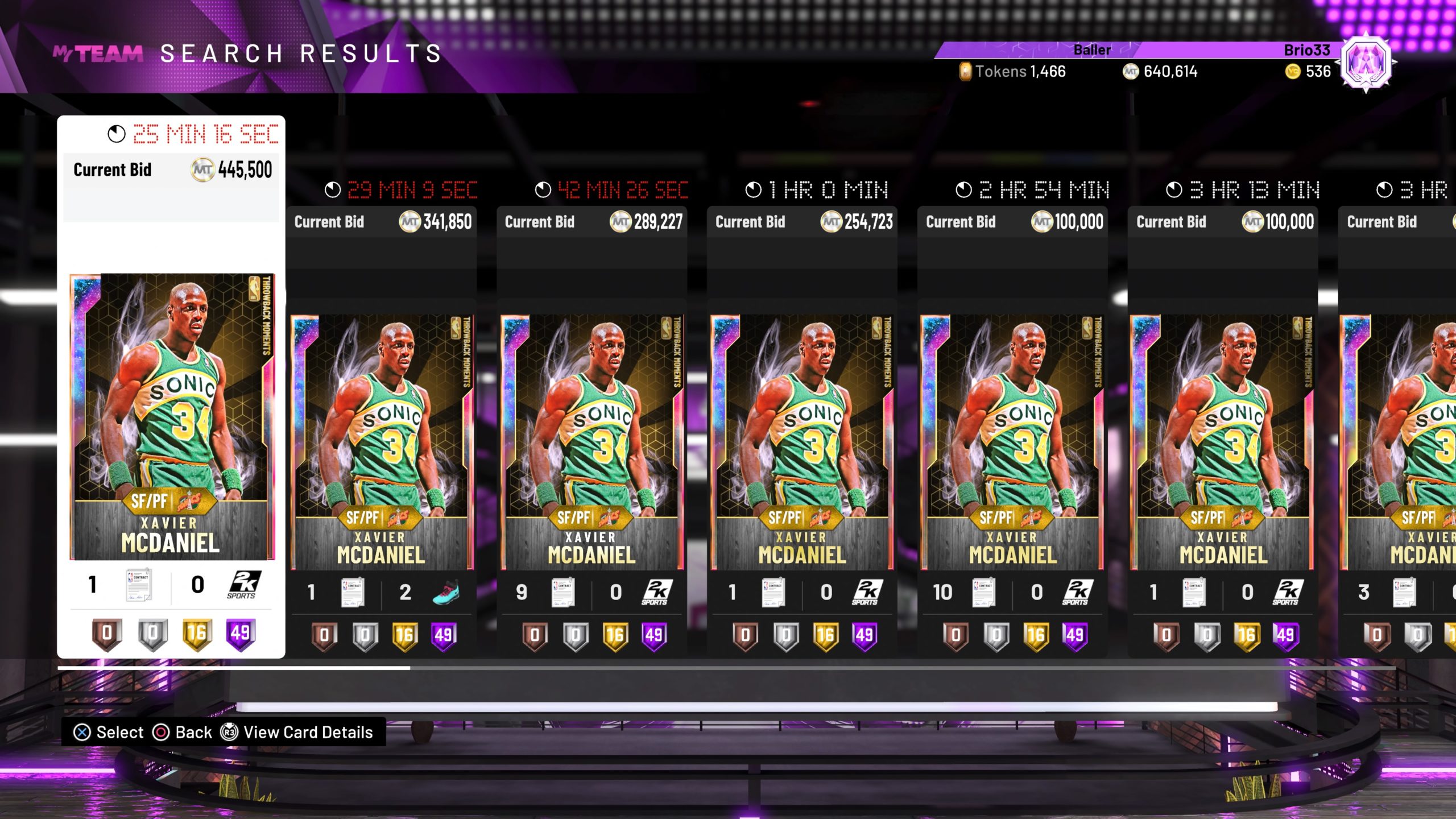 As much as I wanted that card, I just couldn’t justify the price. I can justify, however, FINALLY spending the tokens I’ve been saving up for months. 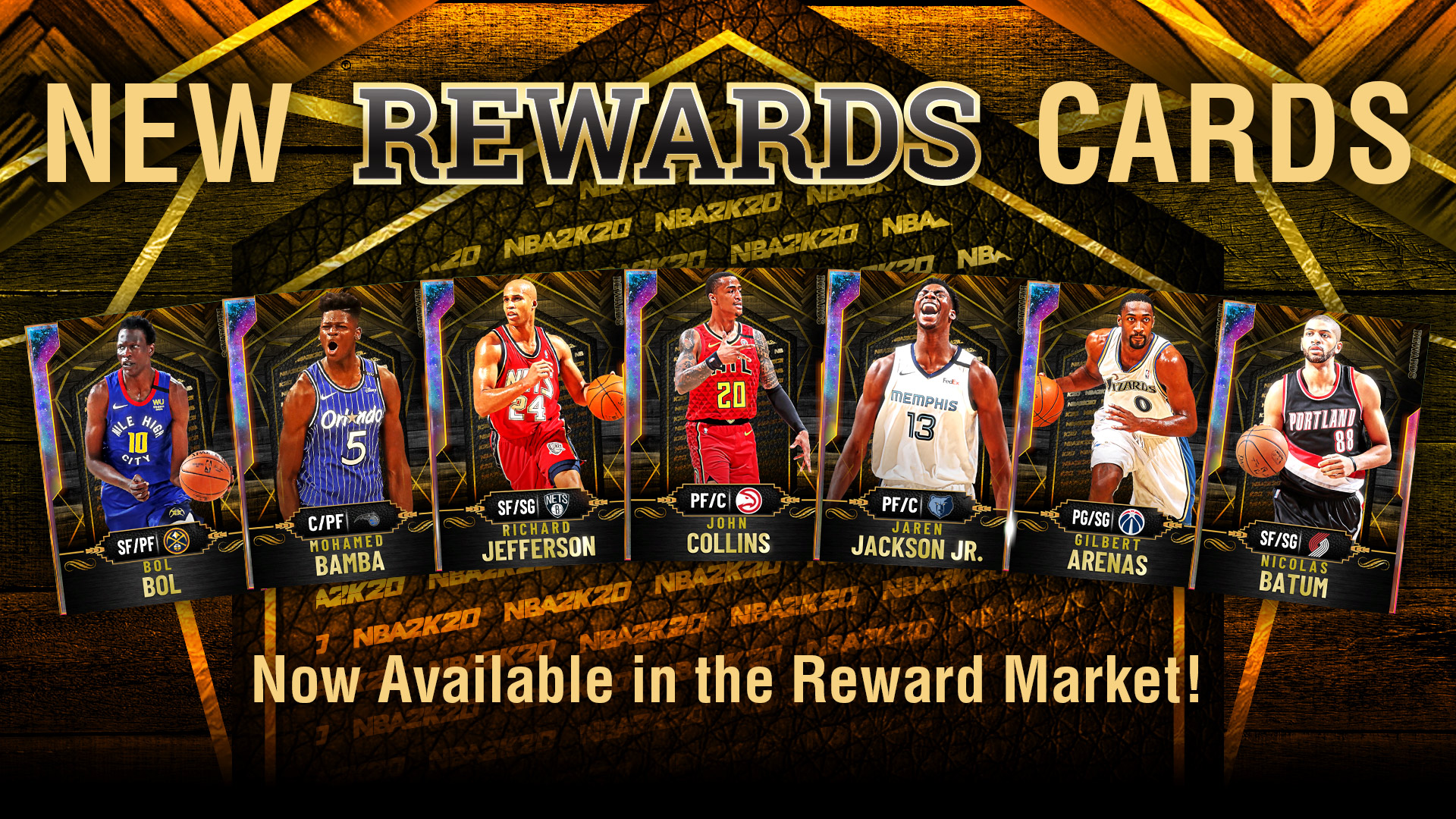 Last time I mentioned not falling for the 1,000 token packs dropped in the reward market, and I’m glad I was patient. I had plenty of tokens to pick up Mo, plus that Bol Bol card. Both are fantastic and I can’t recommend them enough.

Last year we got all-99 rated Jordan, Kobe and LeBron cards in the token market, so most people just assumed we’d be getting a healthy dose of G.O.A.T. players in a huge endgame token market update. But it didn’t happen. Yet.

I’m going to hold out hope that they’re still coming.

I wouldn’t be surprised if 2K did something similar to the token packs they just dropped where maybe you can buy a pack for 1,000 tokens that has a chance at one of three G.O.A.T. cards in it. This would probably feature cards from the auction house only though, so no Kobe or Kareem, etc. But that’s definitely better than nothing.

Plus, there are other players still deserving of G.O.A.T. cards that maybe we could see.

Bill Russell and his 11 rings come to mind first, and he seems like a perfect player to put in the token market (as a new Russell probably wouldn’t entice people to buy packs). Oh, and of course there’s this guy named Moses Malone that hasn’t gotten any MyTeam love since his Player of the Month pink diamond waaaaaay back in February. At the very least, he’s deserving of some kind of updated card, even if it’s just a regular old boring opal.

Speaking of updates and G.O.A.T. cards, Kobe is the only one without 99-ratings across the board. But a quick duo update would easily fix that, and the obvious candidate is G.O.A.T. Shaq… 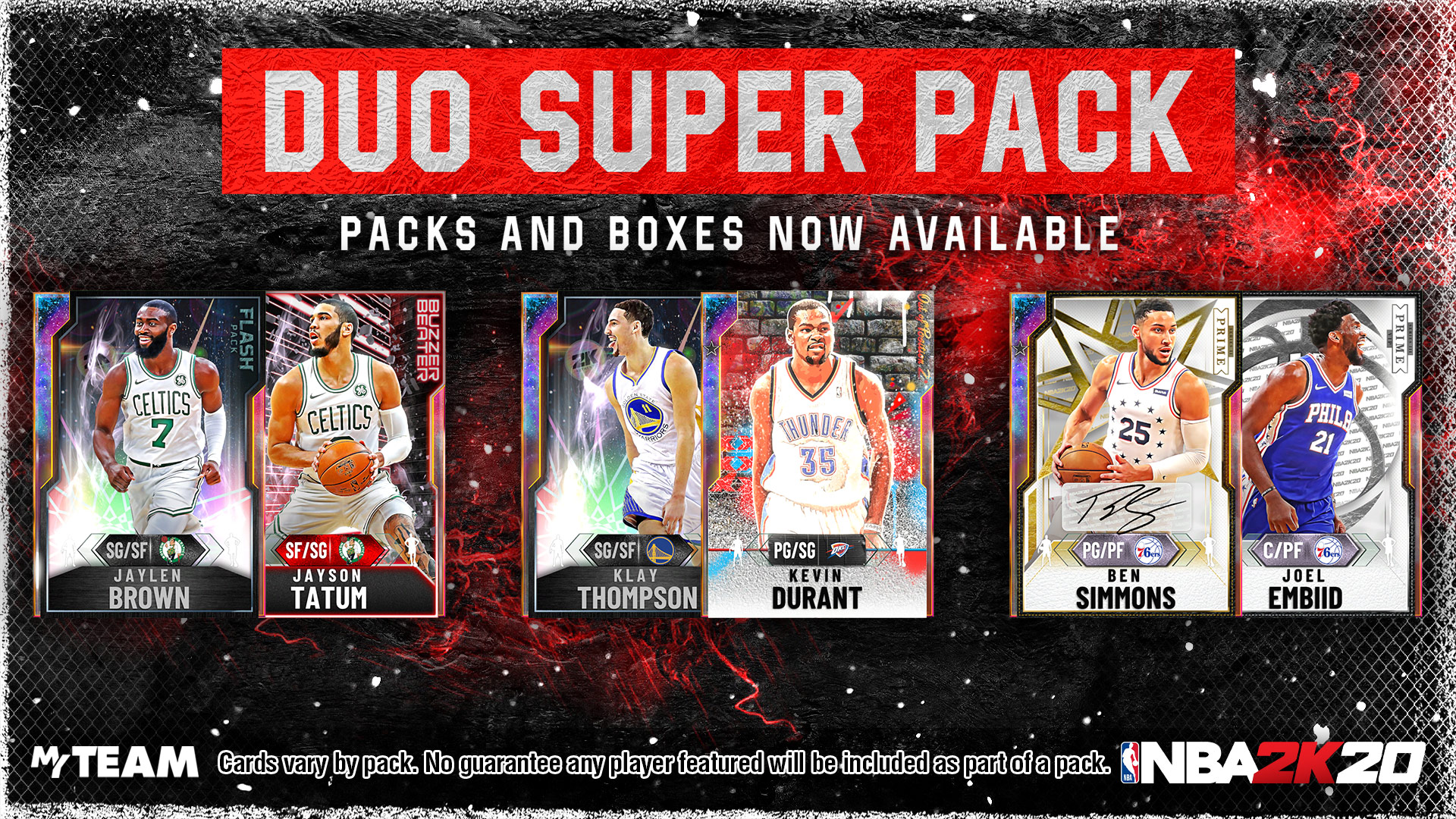 But that duo didn’t drop last week. Nor did any other reward of G.O.A.T. duos (like Michael/Scottie, Magic/Kareem, and so on). Could one last duo drop (or updated evolutions) be coming? I hope so.

While there were some nice duos that did come out, the only new one I got psyched about was (surprise surprise) Ralph Sampson and SF/PF Hakeem. 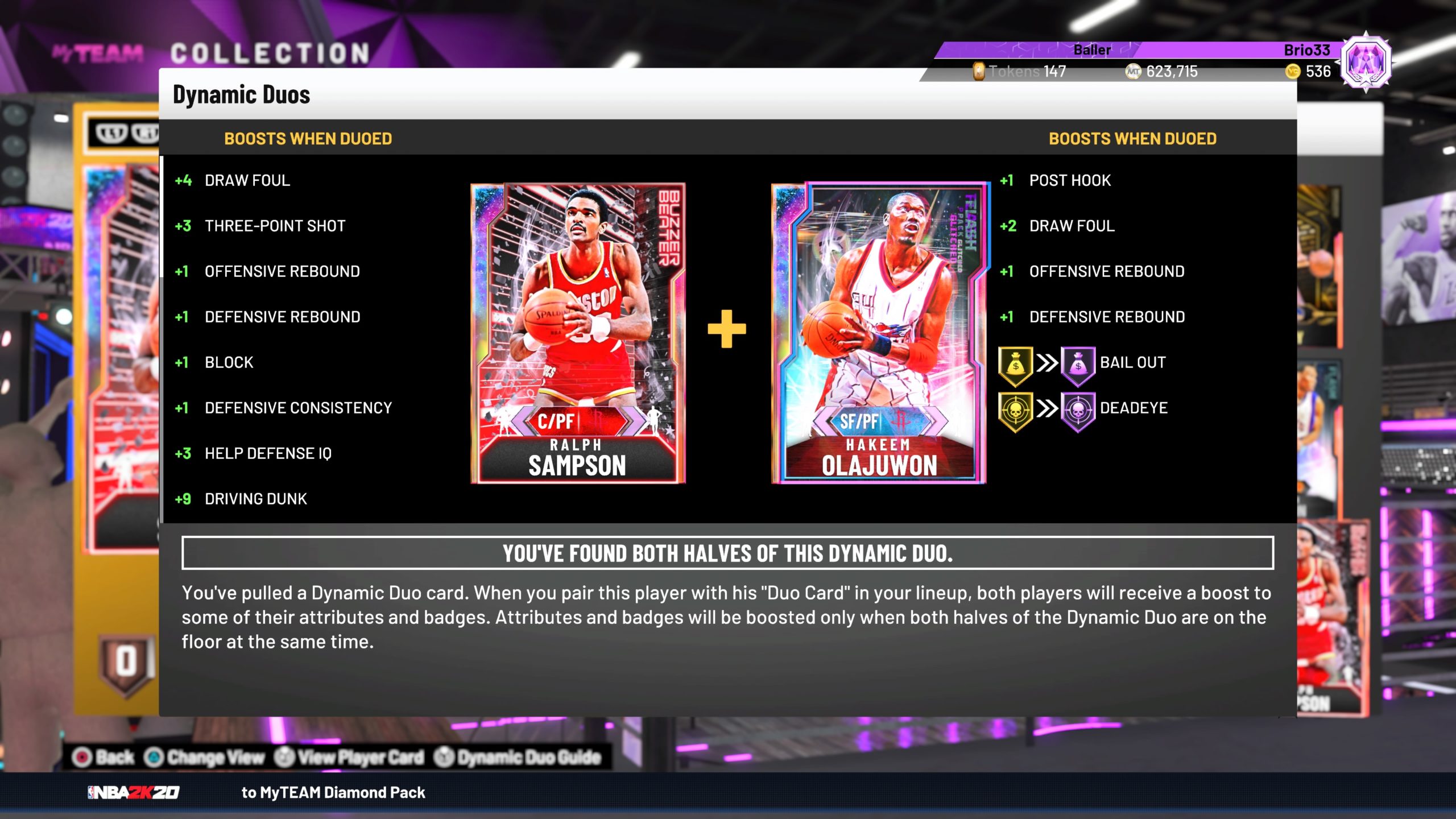 The stat upgrades aren’t game-changing (and honestly it’s hard to upgrade opals that are pretty stacked to begin with), but it’s still nice to see the Twin Towers back together again. 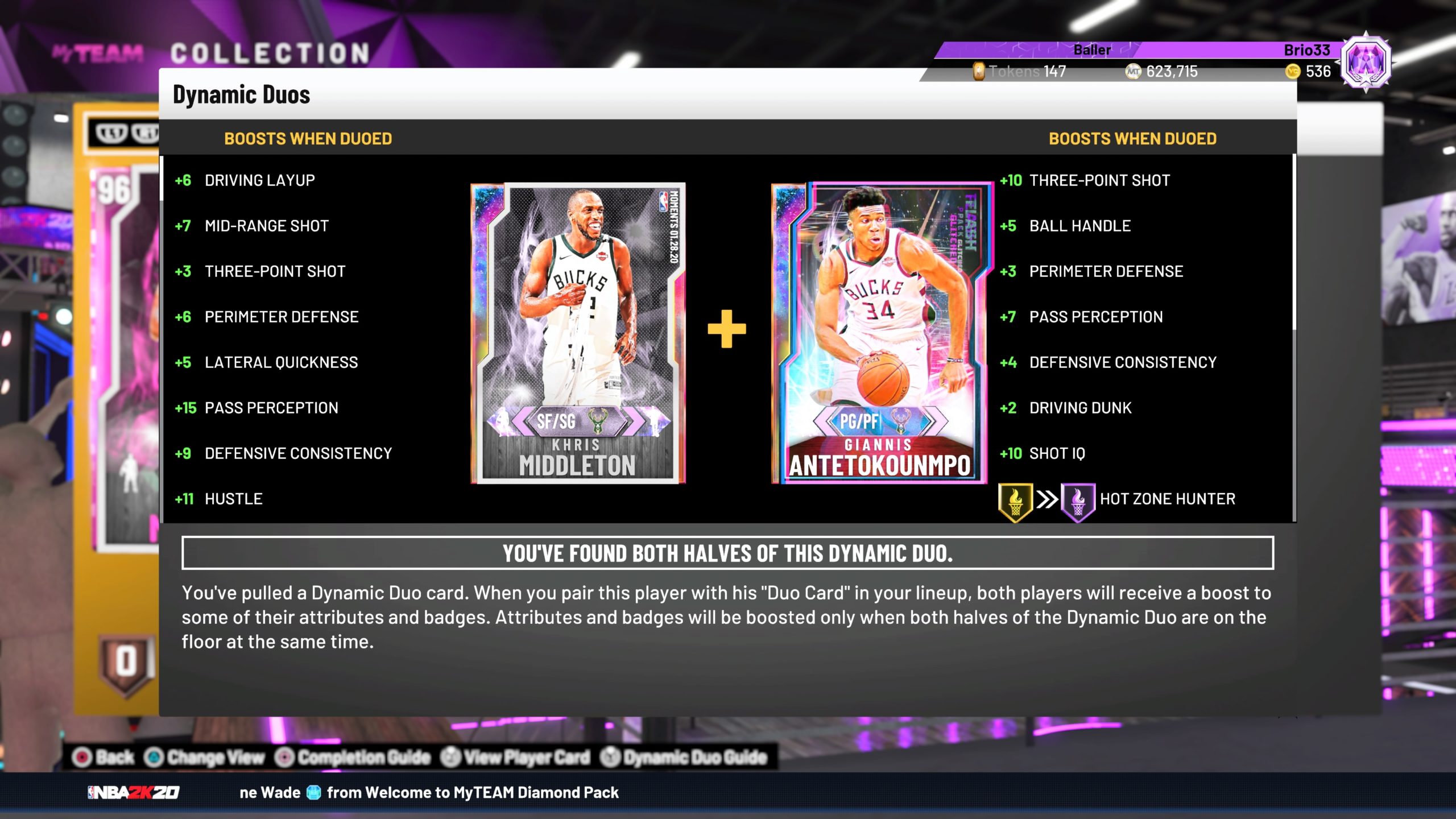 — and Khris Middleton’s duo with point guard Giannis is the perfect example. Both go from pink diamond to galaxy opal, and I already had Middleton, so I just had to do some shopping for the Greek Freak.

Fortunately for me, not many people were super interested in this duo I guess as the price didn’t go as high as I worried it might. I got Giannis for 115K that same night that the duo packs were released, which has been approximately the low-end of his price for the past couple of weeks anyway.

But in retrospect, I definitely shouldn’t have wasted that MT. 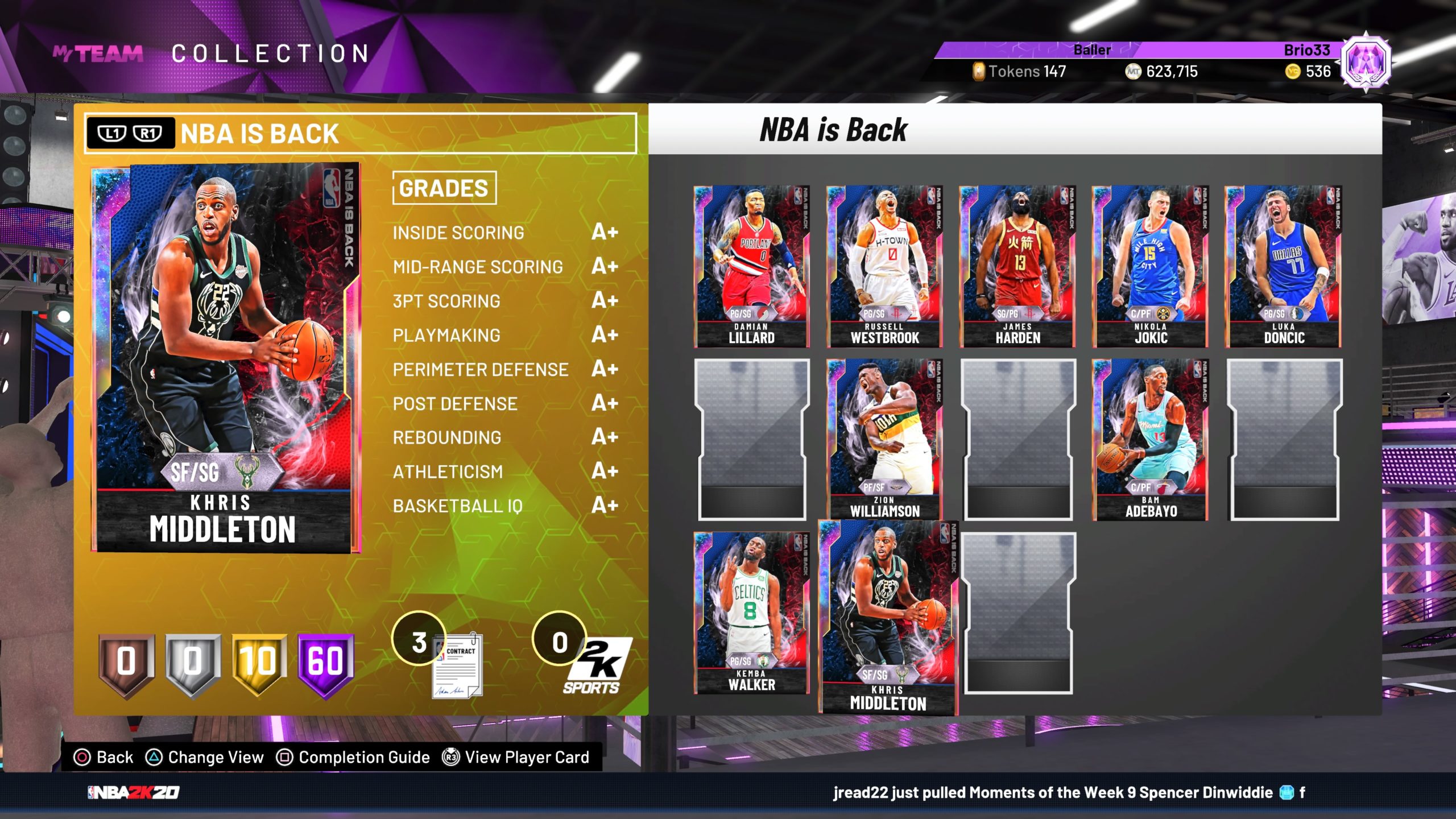 2K really must love messing with the community.

They really went out of their way to make a Middleton opal (via duo) on Tuesday, then drop another nearly G.O.A.T. level opal (with 60 HOF badges!) three days later. How about another Bucks player instead who could actually use an update like Donte DiVincenzo?

Or what about Al Horford, or Tim Hardaway Jr., or Tyler Herro, or Serge Ibaka, or Marcus Smart — I could go on and on naming other NBA players in the bubble who could use new cards.

So yeah, my Middleton and Giannis are basically worthless now because the market crash that happened on Friday was seismic. And rightfully so, as it’s not everyday we get guaranteed opals in packs. I actually can’t recall that ever happening before. But it wasn’t just because of the NBA is Back packs, oh no, this market crash got an assist from the future: 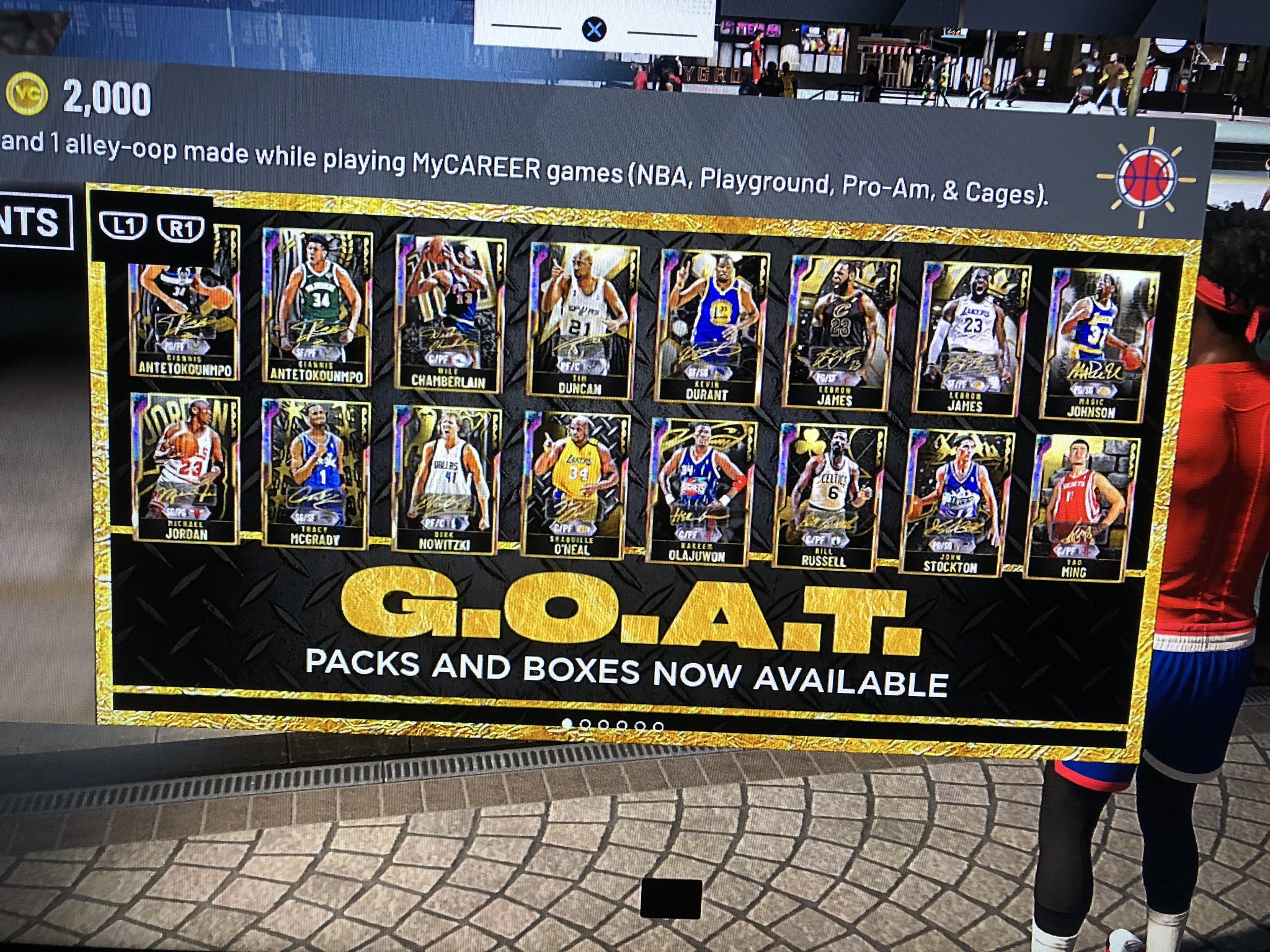 If this leak is real, G.O.A.T. packs are coming soon.

And it makes sense because of course 2K wouldn’t miss an opportunity to make money off of a G.O.A.T. Durant this year. It’s all of these other G.O.A.T. cards that I’m surprised (and excited) about.

But which ones to try and get?

Going into the this last weekend, I had planned to throw down all my MT for G.O.A.T. Yao and Out of Position Durant (plus lock-in reward opal Jonathan Issac). They were going to be the last editions to my squad, and then I figured I’d wind it down for the year.

If I can somehow afford G.O.A.T. Durant or T-Mac, I’ll be thrilled. And if I can pull them with MT, the prices might actually be reasonable. (I still can’t believe the prices of some of the “NBA is Back” opals.)

But if it’s VC only and the prices stay high, I bet I’ll be able to at least grab Yao much cheaper than I ever thought, plus maybe even Hakeem and Dirk on top of that. They’ll probably be cheap comparatively — just not Stockton cheap. If John is the Kemba or Zion of these G.O.A.T. packs, there could feasibly be a discard-value G.O.A.T. opal available soon, which is absolutely insane. 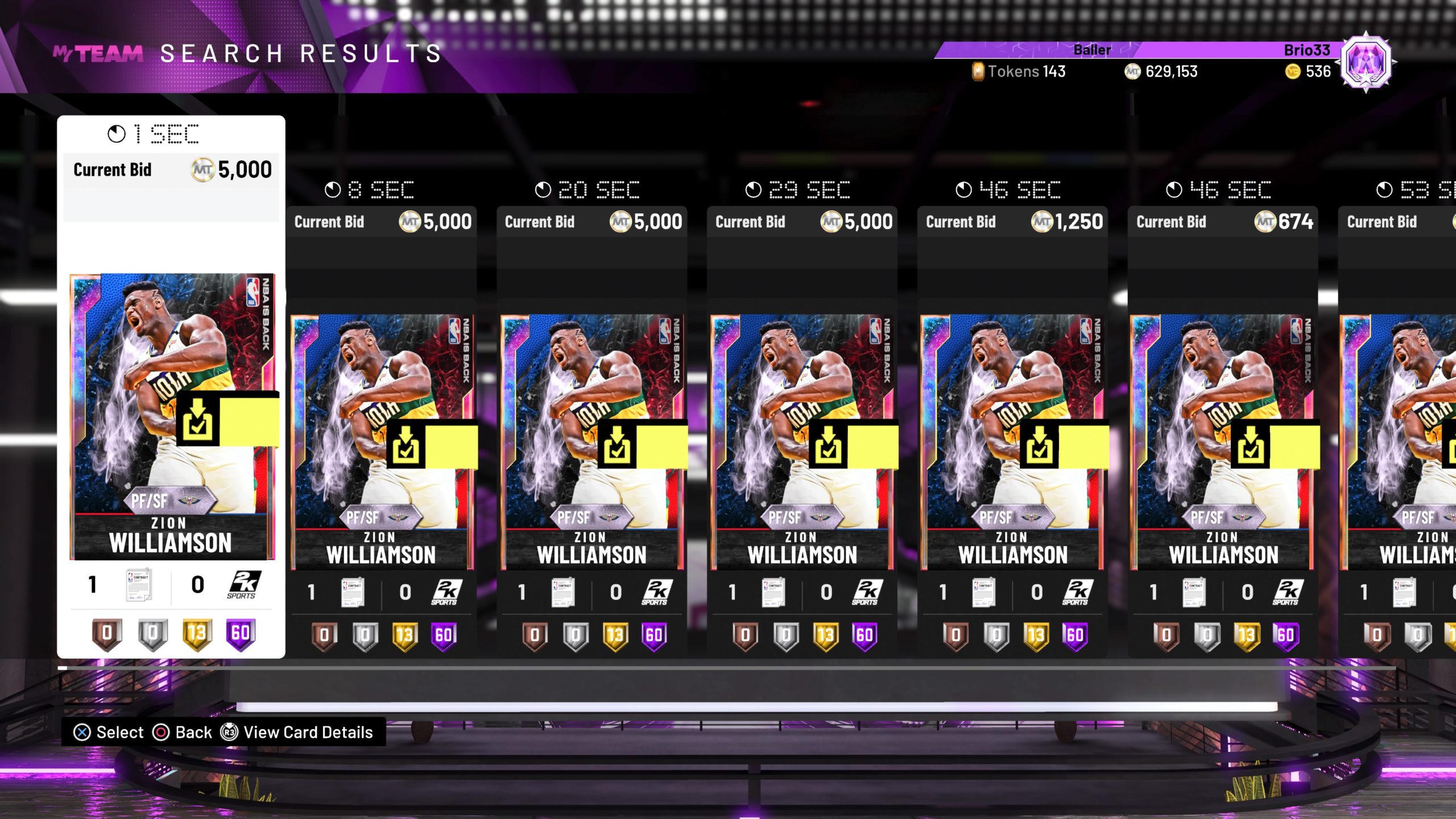 So just when we thought 2K20 was done, all signs now point to us getting yet another week of content to look forward to. Maybe more. I know a lot of folks are tired of 2K20 and just want to unplug until September, but I’m excited.

I’ve put too much into my squad this year to just give up on it now.

Plus who knows, maybe we could even see more Spotlight Challenges!🤞 There’s gotta be something new to use all of these G.O.A.T. cards on, right 2K? And I’m certainly not going to be out there sweating for Oscar Robertson. No thanks. Not worth it. (Hopefully 2K21 will see an evolution to the online competitive modes in MyTeam, that’s my biggest wish for next year.)

But to circle back to the “FINAL Throwback Moments” again, maybe those are ending to make room for new Current Moments packs? The NBA is officially back in real life, and some players (like T.J. Warren and his career high 53 points!) have certainly had Moments-worth performances.

Either way, I’ll be on the edge of my seat this week because with MyTeam anything can happen. I just hope I’m not setting myself up to be disappointed.