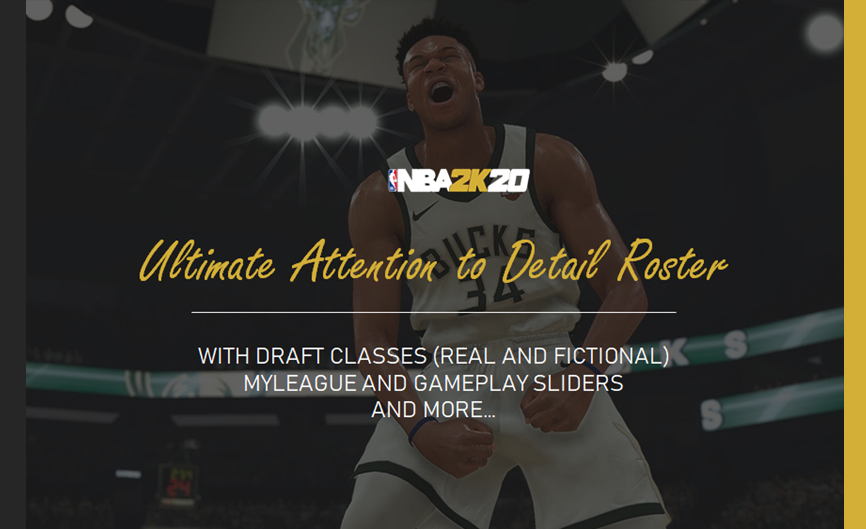 The NBA 2K20 Ultimate Attention to Detail Roster from CelticLG is another one of those all-encompassing beasts that is “complete” but also a work in progress. There is a MyLeague guide, ratings adjustment (work in progress), a Tendencies guide, a Badges guide (on the way), plus fictional draft classes incorporated and more. It is for those looking to get a whole new “feel” for MyLeague on PS4 consoles. There is an Xbox One port of this roster, but I have not kept track of it in recent months so I can really only vouch for the PS4 version.

Above you can see a look at the roster in action. You can’t get a true “bubble” on consoles like you can on PC, but you can search for custom bubble arenas in the Share area and find things like the above to somewhat hit the spot.

How To Find The Rosters

About MyLeague sliders: I’ve used Schnaidt’s sliders as base, and edited the simulation stats part, and the contract sliders. Feel free to use another type of sliders if you prefer, but remember to keep the same values for simulation sliders and contracts sliders (very important)

There is an Xbox One port, but again I have not scoped it out. Search under the GTs: Kaman615 or MiaFinest97 for the file.

What’s In The NBA 2K20 Ultimate Attention To Detail Roster?

You can find a full list of what’s in the mod in the thread itself, but here’s a breakdown of the high-level elements:

[1] Tendencies overhaul, with all of them updated, we hope to give you the most realistic experience as possible (more details):

[2] Badges corrections: all of them have been assigned to a maximum of 15-20 players per badge, in order to create better separation between specialists and the rest of the players. The OP badges (worm, rebound chaser, downhill, quick first step and others) that ruins gameplay and/or sim stats have also been removed

[3] Playbooks corrections: more than 300 real-life plays have been added to the various playbooks of the teams (based on system, freelance and style of the players). All teams have 50 plays now. We’ve made sure to have perfectly balanced playbooks, with a good variety of plays, repairing the errors left in the default ones (Sixers with no post-ups, Pelicans with no 3pt plays, etc)

[4] Play-types have been updated (and placed on correct order) based on Synergy’s data, now all the players have assigned their real-life style of plays

[6] All injuries of players during their careers have been broken down according to body parts (yeah, it took a long time) allowing us to update all the durability attributes based on the injuries that the players suffered

[8] Hot zones upated for all the players with at least 100 shots this year (+ we used last year data for players that haven’t stepped on the court this year like Durant, Wall or Nurkic)

[10] Accessories and shoes updated for all the players in the league (all credit to DancyHercules3), with also corrected frequencies

[12] Play for win, financial security and loyalty updated for all the player in order to resemble their contracts requests (veterans will take the 1-year minimum contracts, low rated players will go to the team that pays them more, players out of their rookie scale will try to secure the bag)

[13] Potentials are corrected in order to have more stability and balance during MyLeague’s future seasons, reducing the huge number of 80+ OVR players that showed up after a few years of simulation

CelticLG has also designed an incentive bonus if you want to support the roster further. If you donate to specified charities directly or via his PayPal that he will then send to the charities, you can get access to this content. I would always recommend giving directly to the charity, not that I think CelticLG isn’t on the up and up, but I would always say the same thing regardless as it just cuts out a middle person. He has a list of approved sites he will accept here. And if you make a donation just be sure to keep a screenshot of the donation so you can send it to CelticLG to get access to the bonus content.

All users who make a donation will receive:

I have tried to highlight a wide array of NBA 2K20 rosters, and I think it’s important to do that because NBA 2K21 on current-gen consoles might end up in a weird spot between the ongoing bubble season and next-gen games on the horizon. It might make more sense for many folks to simply stick with NBA 2K21 longer than usual, and custom rosters like these are a big way to give the game legs. It’s also why 2K needs to get on the hop and give folks a way to transport these rosters from game to game like MLB The Show.