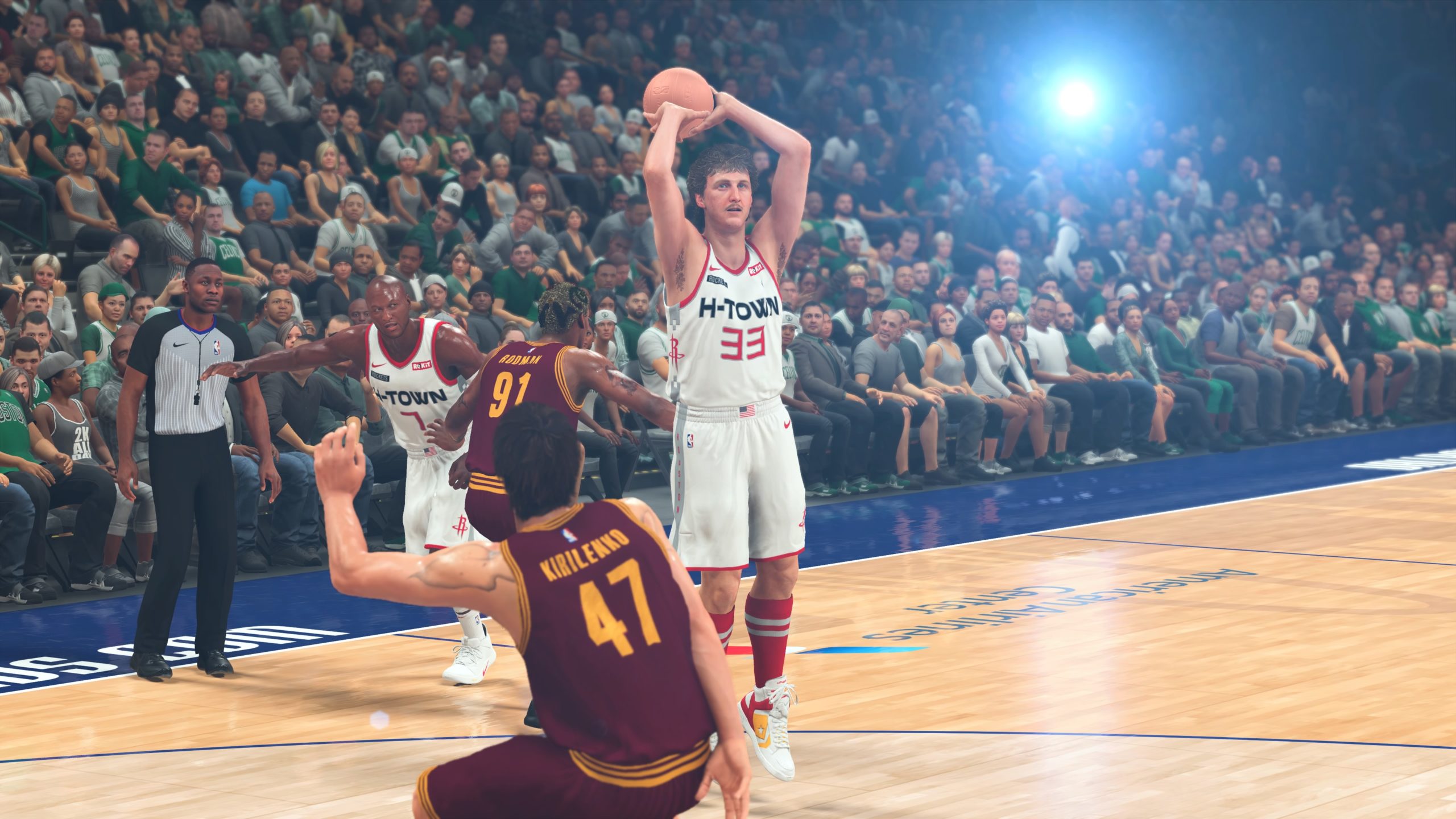 I finally got my first G.O.A.T. card this last weekend.

No, it wasn’t LeBron or Vince. It was Larry Legend, and I earned him the old fashioned way: playing the game. Next up is Kobe, then maaaaaybe Steph, but I’m still not 100 percent sure if I want to endure that grind.

Although, I do need some games to play to test out all the other new cards I got. 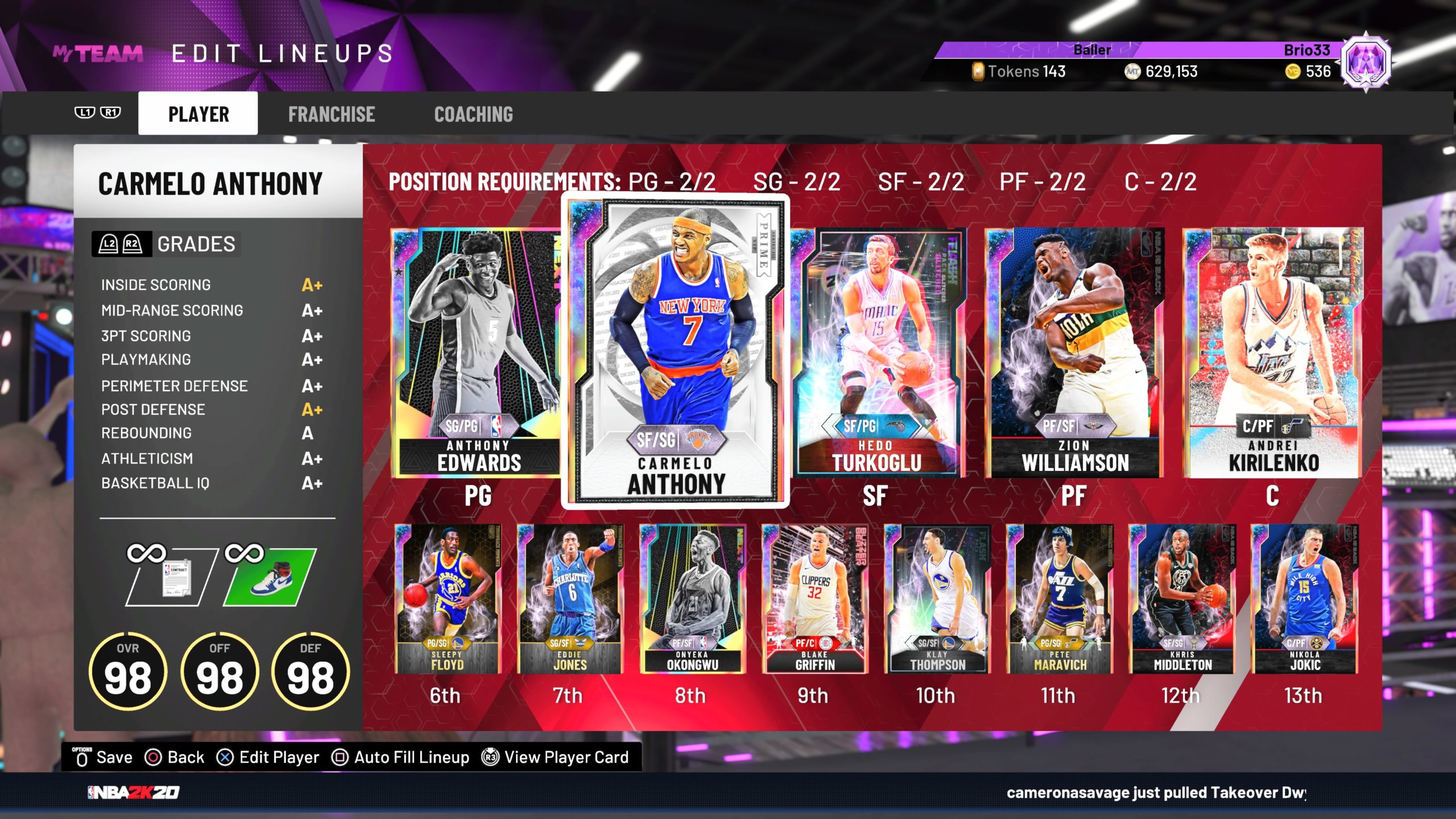 All of the cards in the picture above I got for under 20K MT. Some of them for dramatically cheaper. So I thought I might spend a few words here to single out some great players. They might not be new to the game, but they’re (mostly) new to me.

Anthony Edwards: Wow, probably my new favorite point guard right here. I had read some of the hype, but didn’t think he’d be this good. I love his shot release and athleticism. Earlier in the year I had him as a rental to flip, but now that I’ve tried some games with him as my primary scorer, I’m sold. Oh, and the fact that I got him for 15K certainly helps.

Carmelo Anthony: I had the older opal Melo for a bit and was trying to evolve him for a while. Then when SF/SG card came out, I sold old Melo and waited for the right time to grab this one. That time was last Friday, and he’s a scoring machine who can suddenly play defense and make plays. I love it.

Hedo Turkoglu: I’d bought and flipped Hedo numerous times for a nice profit, but always knew he’d eventually find his way into my squad. Even in August, his ability to put up points is off the charts. Maybe sometime soon I can get my hands on Rashard Lewis and try out their duo, but unfortunately Rashard isn’t in the sub-20K category yet.

Zion Williamson: I can’t believe we live in a world where there’s an opal Zion available for basically discard value. And he’s a better card than the reward Zion you could get for locking in the NEXT set. Sure, NEXT Zion could play point guard, but I’m so glad I didn’t try to lock in that set.

Andrei Kirilenko: Andrei has been a great 2K MyTeam card for years. This year we got a diamond earlier in the year that I used a ton (and flipped for a profit a zillion times), plus he has two opals. I had the SF/PF opal for a while, but when this C/PF Andrei came out, I went all in and haven’t looked back. His price seems to fluctuate a ton, but when the market is down he’s easily one of the best values in the game. 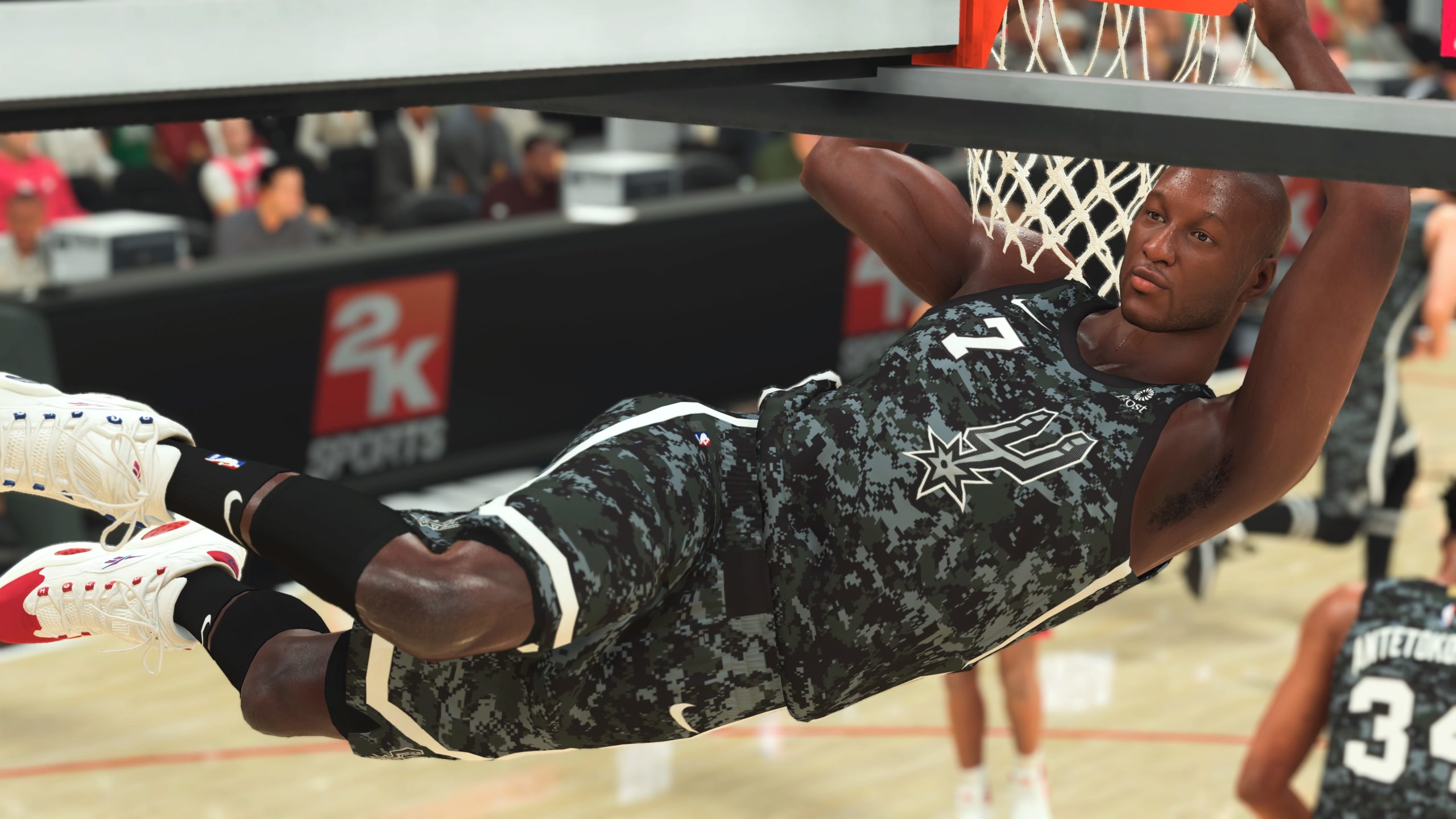 I also feel the need to make an honorable mention for another card I picked up last weekend. He’s not quite 20K MT cheap, but for a previously bid-only card, I was very happy to get Glitched opal point guard Lamar Odom for 80K.

I’ve loved Lamar since his diamond, but now you can get either opal (SF/PF or PG/SF) for insanely cheap, and I highly recommend either if you haven’t tried him out.

So the moral of this story is that now is the time to try out all of the cards you’ve wanted to try in 2K20.

Well, actually maybe after this upcoming weekend, and the inevitable auction crash the G.O.A.T. packs will bring. But either way, have fun with the game while you can because 2K21 is just around the corner and at least for the next month everyone can have their own god-squad. 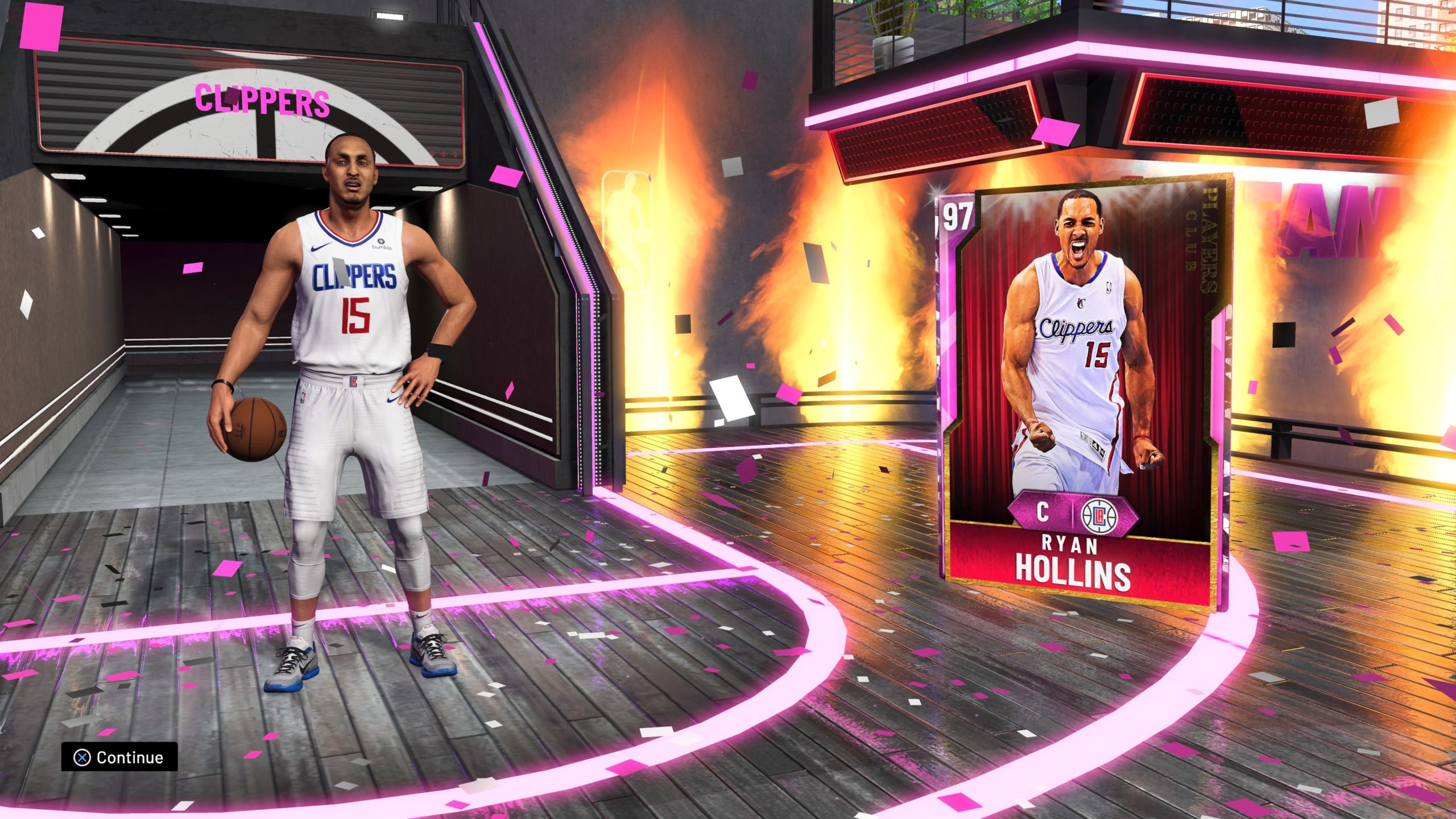 And finally, here is another thing that’s new to me. It’s a cool website (or app) to help keep you up-to-date on locker codes. And there’s still plenty of codes out there for free cards, tokens and packs.

Maybe if you’re lucky, like I was, you’ll also get the pink diamond Ryan Hollins instead of the amethyst.

That statement was meant to be sarcastic, but seeing as how the Hollins pink diamond is the best Player’s Club card I’ve gotten so far, in the moment when I pulled him I was genuinely excited about it. I especially say that because as the tweet below illustrates, the odds of getting the higher-tier cards were slim to none. 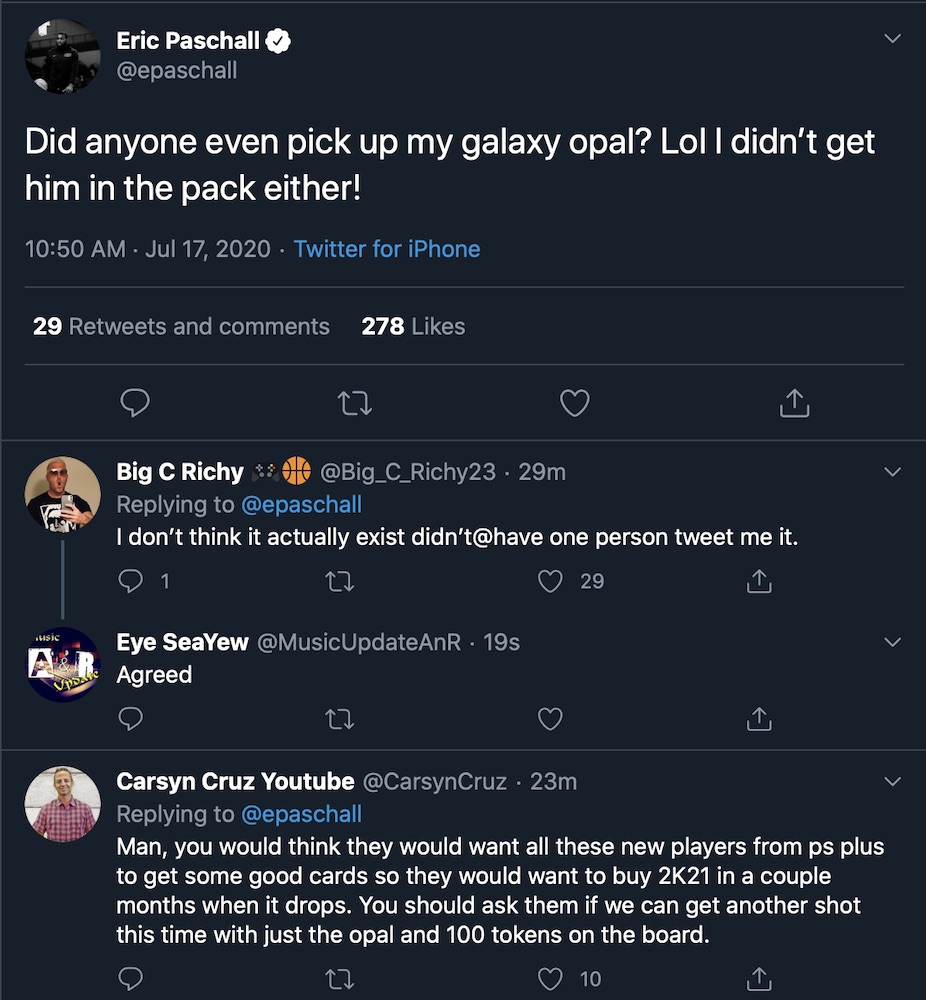 Maybe next year the Player’s Club codes (which are a great idea in concept) will be a little more worth it. Until next time folks, stay safe and get to spending that MT on your own personal Dream Team.