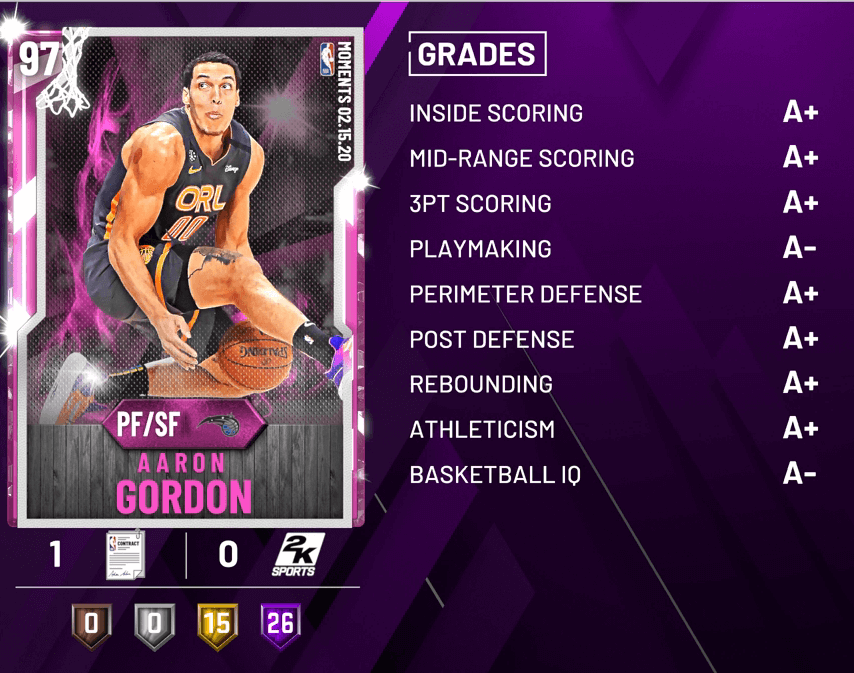 With the power creep in full effect, All-Star Weekend has been a big turning point for MyTeam. Diamond cards are now looking better than some pink diamond cards and that trend continues here with diamond Derrick Jones Jr. and pink diamond Aaron Gordon. This transition is both good and bad. On one hand, it means you can get players for cheaper and basically put out a squad comparable to a lineup with the best players in the game. The negative is anything you did buy for a big price in the past will most likely be sold for a big fat loss. Regardless, try to hold strong and don’t panic sell until after the Flash Pack goes extinct. At that point, for sure try to get out of cards at some point next week, but for now the crash should continue through the weekend.

Anyway, here are reviews for two of the participants from one of the dopest NBA Dunk Contests ever: pink diamond Aaron Gordon and diamond Derrick Jones Jr. If you want reviews for Bam and Buddy, you can find them here. 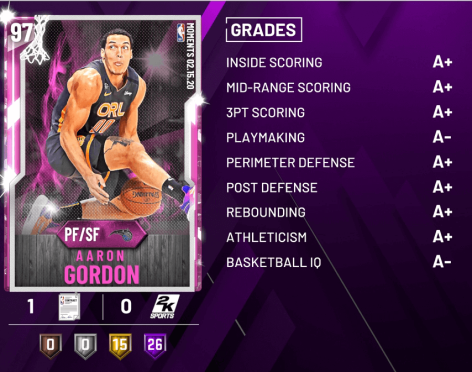 Analysis: First off, clearly the dunking is off the charts. However, I’m not super in love with this card after trying him out. I thought that might be the case going into it because while I still think his ruby Moments card is a great budget option, Gordon’s shot remains a bit suspect. The Quick Draw badge has helped it and he’s got hot zones all over, but it’s still not a great shot release. On top of that, he’s not quite the defensive monster I would want him to be due to his 6-foot-9 frame. He’s very mobile and it’s not like he’s being taken advantage of out there, but I just don’t think he reaches the level of a top-notch defensive force.

Elsewhere, he still doesn’t blow by enough players off the dribble, even at the four. I’m not sure why that’s the case, but maybe it has something to do with the animations at his disposal or that his player model doesn’t feel like it has crazy length. I wanted to like this card because I think Aaron Gordon is a perfect sort of MyTeam player, but yeah, it didn’t blow me away. 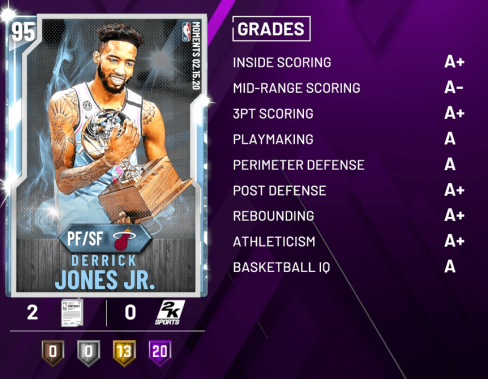 Analysis: I had some similar feelings going into things with Derrick Jones Jr. as I did with Aaron Gordon, and those mostly ended up being true. At 6-foot-6, it’s a non-starter to put him at power forward for the most part. So if we look at him as really more of a small forward, the issues come up a little more. He’s not an elite ball handler, and his defense is better around the rim than out on the perimeter.

However, his shot is much better than Gordon’s for me, and it never hurts to have a lefty out there. On top of that, of course the dunking is crazy, and with HOF Pogo Stick you can just spam the jump button on defense (it’s gross that it’s that way, but that’s the badge). So if you do get him around the hoop on defense it’s not like he won’t have plenty of use there, it just means Jones Jr. is more this weird outlier than a normal good card for everyone.

Between the two, it’s hard to say one is better than the other because they both have different uses. I already got rid of both of them, and I just think diamond Miles Bridges is better in terms of being a traditionally useful card, but neither of these dunking phenoms will be a negative out there.