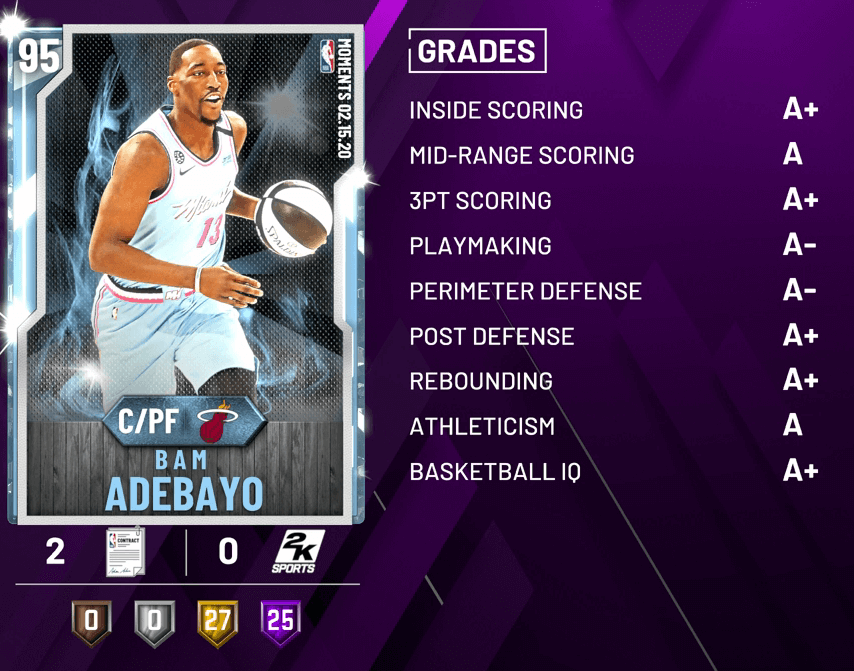 With the power creep in full effect, All-Star Weekend has been a big turning point for MyTeam. Diamond cards are now looking better than some pink diamond cards and that trend continues here. This transition is both good and bad. On one hand, it means you can get players for cheaper and basically put out a squad comparable to a lineup with the best players in the game. The negative is anything you did buy for a big price in the past will most likely be sold for a big fat loss. Regardless, try to hold strong and don’t panic sell until after the Flash Pack goes extinct. At that point, for sure try to get out of cards at some point next week, but for now the crash should continue through the weekend.

Analysis: Adebayo’s card is nuts. I have previously said Bam is a hard card to make work in MyTeam because what he’s good at does not really translate well to what works in NBA 2K. That being said, this card is just good at everything so problem solved! With 25 HOF badges, it’s another pink diamond in everything but overall rating. The battle you’ll have with this card is how you want to utilize him. I did not have a ton of success using him as my point guard and facilitator. However, he still worked as a hub for the action like he and Draymond Green would in real life.

The other interesting thing about him is he does have that versatility that most centers lack. With more and more cards like Ben Simmons and LeBron James now making it to point guard, we’re coming to a point where you can mostly avoid using a traditional center and go to a pure switching 1-5 scheme. I have personally started leaning this direction because height is still all that matters at points no matter what. So if you just accept that, you can mostly just run big men off the court with your super versatile lineups. On top of that, it’s invaluable having a center who can grab a rebound and go, and Bam is now essentially the premiere option to do just that.

You can still keep around a traditional center in reserve, but Bam has held up well so far. His shot release is easy enough to handle, and now that he can hit deep shots you’re getting the best version of an athletic do-it-all stretch five. He may not quite be able to run pick and rolls or hop step with some of the best out there, but otherwise he’s all gravy. Most people seem to realize that as well as his price has not come down as steadily as some of the other diamonds so far. 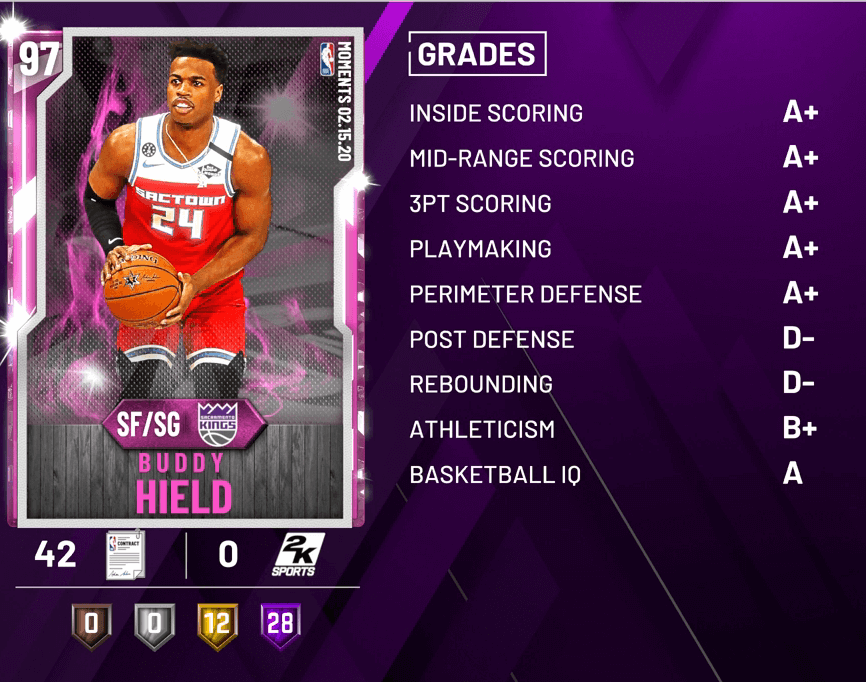 Analysis: Veterans of MyTeam should be well versed in Buddy Hield by this point. He’s gotten a load of Moments cards already, and this one is a rather humorous upgrade all things considered. Since he was already decked out with insanely good shooting stats via his diamond Moments card, 2K just turned this Hield into an athletic freak who can now steal the ball like an all-defense player. Why he gets those upgrades after winning the 3-point contest, who knows! Regardless, Hield should remain a mainstay now in many lineups because his same silky stroke now comes with all-around skills.

I don’t really have much more to add on Buddy that I have not said previously. He has hands down one of the best shot releases in the game, and the only issue is he’s still only 6-foot-4 so he’s not the “ideal” height for a shooting guard, and I won’t ever play him at small forward. Still, he’s been of of my favorites all season and this does not change that.