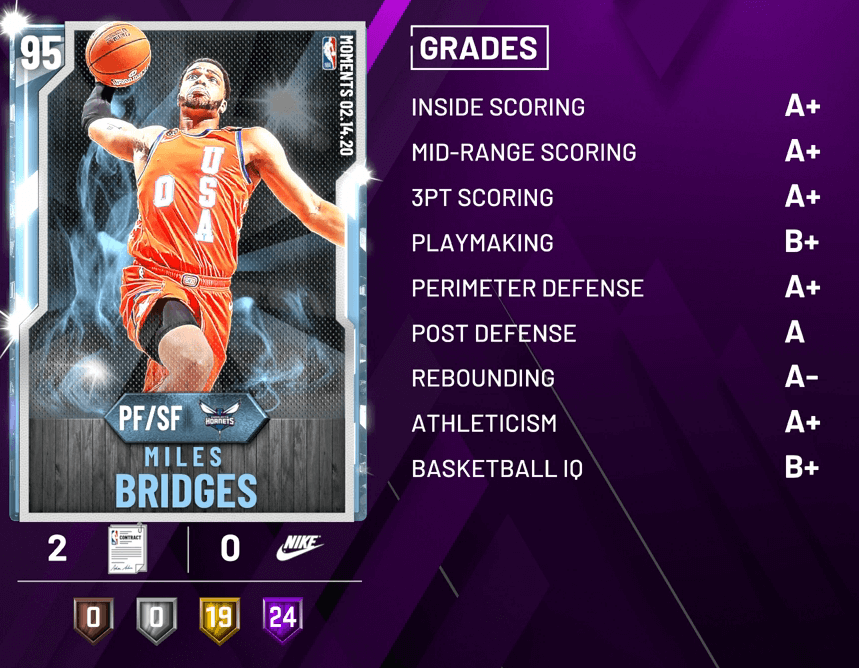 Miles Bridges won the Rising Stars MVP Award last night, and thus he gets a MyTeam Moments Miles Bridges card. It is quite the diamond, and it’s among the most well balanced diamonds you can now get in the game. It’s also a great card to get on the heels of the All-Star Flash Pack. He has one positional flaw, but otherwise it’s a great card going for a reasonable price. Let’s chat about him.

(PS, you can find Bridges in the All-Star Flash packs even though he’s a Moments card.)

Analysis: 24 HOF badges, my word. He’s going for about 40K MT or so, and I suspect that will continue to drop through the weekend (as that’s generally the case with just about every card). Bridges also has a little bit of a MyTeam reputation because he had a really good card in last year’s game. On top of that, he’s got a smooth release, can jam for days and has plenty of speed. This card is a pink diamond hiding in diamond form.

The problem is he’s not really suitable at PF. He’s fitting into that same space as the pink diamond Zion Williamson (he’s better than Zion), but at 6-foot-6 he’s going to get beat up at times if you leave him there. Even at SF, the size is not ideal with Ben Simmons and Giannis running around, but you can make it work because he’s got defensive chops and good speed. It would be perfect if he were a SG, but that’s not to be here.

Still, Bridges is basically an all-around player. He has almost every badge you could want on a wing, and he can score at every level. He’s not an elite ball handler, but he’s still not going to kill you even there. This card at under 40K MT is such good value, considering the cost of pink diamond Zion and some of the other pink diamonds out there right now. No, he’s not a huge name, but he’s going to get you plenty of good results. If you just spot him up in a corner, you’re doing him a disservice but he’ll be able to pull that off as well. The fact that you can have him defend almost anyone but the center (depending on the team) is just another feather in his cap.

I can’t see any reason not to pursue this card if you just want to put the best team on the court at the cheapest price possible.