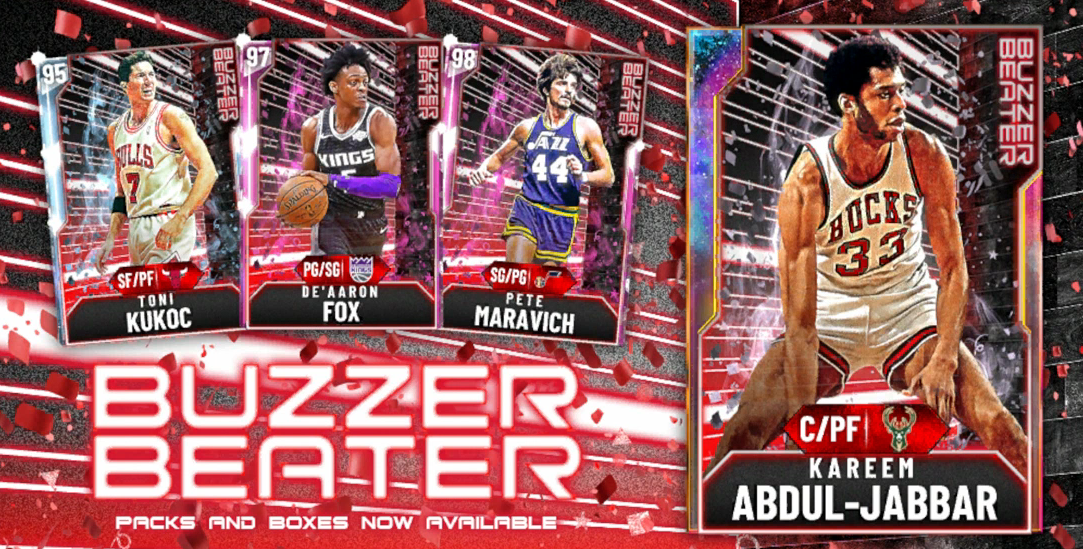 I have spent plenty of time talking about the power-creep chaos of NBA 2K20 MyTeam, and so I more want to point out the weird phase MyTeam has entered with all these insane cards coming out week by week. The latest example of this comes via the Buzzer Beater packs, and really, the addition of galaxy opal Kareem Abdul-Jabbar.

We have received Giannis at PG and Dwight Howard as a galaxy opal in the last couple weeks, and both these cards are very expensive and elite. Now, KAJ comes along  under two weeks later and basically blows Dwight away because he’s much taller than him. This is not inherently bad, but KAJ is just very obviously the best center in the game now. Those who spent a fortune to get Dwight have to be at least a little chapped by that.

At the same time, you get Fox and Kukoc who are terrific “budget” options, while Maravich is a deadly 3-point shooter who will probably be a bench player on amazing teams and a starter on others. The weirdness that comes in now comes from splitting the community into such obvious tiers.

There is a rush to get these top-end cards because most people need them to compete at the highest levels. So while there’s lots of great budget options this year, it’s almost intensified and exacerbated the rush to get to the top of the market. It’s created a situation where either people are probably spending a ton of real money or none at all. Maybe this is a design by 2K to focus even more on “whales” and those who will spend a lot of real money to get these top-end players, but it has to leave others feeling spurned.

As much as the cheap cards are great, they’re still outclassed unless you’re very good at the game. At the same time, this problem is probably going to work itself out in the next month. With the rate of absurd cards coming out, eventually you will have “budget” galaxy opal teams that can compete, but right now the power struggle as these new top-end cards come out every week have to be driving a sizable portion of the remaining MyTeam community a bit nutty.

That being said, those who are left are hardcore so they might either be spending money anyway, or they’re so good they can compete even with “lesser” players. In either case, this is the most class-based 2K has been this early in the season. There has also never been a more accepted “god squad” than there is right now in terms of deciding who the best 5-8 players are in the game. Maybe not all of this is bad, but it strikes me as a major departure for 2K, and even one that separates MyTeam from other card collecting modes out there in terms of creating such boring game-to-game roster construction.

On the bright side, here’s a new locker code:

💎 Locker Code. Use this code for a chance at a Diamond Consumables Pack. Available for one week pic.twitter.com/YKheMu8DTc

An unlimited contract would not be bad to have considering the meta.

Operation Sports Asks: Would You Like an NBA 2K Gameplay Mechanic Based On 'Decay'?
NBA 2K20 MyTeam: No New Players But New Locker Code