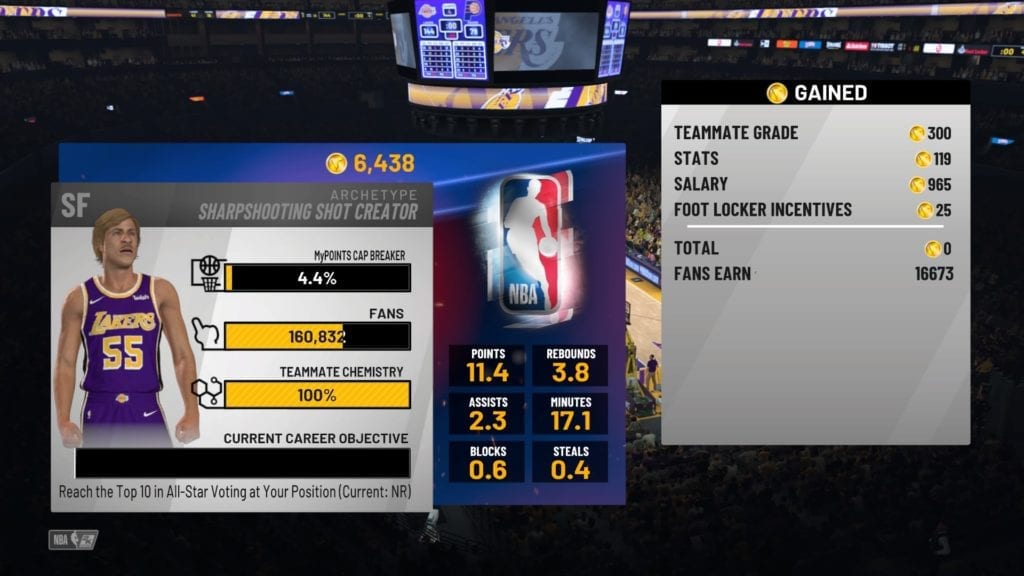 When The Neighborhood was introduced last year within the MyCareer mode in NBA 2K18, it didn’t take long for people to start complaining about its over-reliance on microtransactions. Forced to choose between spending some extra money to better your player immediately or enduring an interminable grind that saw you improve incrementally by playing the game, many felt that the progression from the latter was designed to be such a slog in order to get you to do the former. With NBA 2K19, there was talk of rewarding people more for playing the game and allowing them to level up quicker. So what’s the verdict?

Well, a quick look at Metacritic shows that the game currently has an 82/100 score from critics. However, it’s earned a user score of only 2.3/10. While this is not a unique situation when it comes to user scores on Metacritic (many, many games have suffered this similar wide gap between critic and fan scores on there), it’s worth at least looking at the comments and discussing the current MyCareer situation. Here’s a sampling of those comments from Metacritic:

“An unnecessary and stupidly-long grind fest…”

“The use of micro-transactions are egregious; at every corner VC is required to progress your character.”

Suffice it to say, a large group of people are pretty vocal in their hatred of the game. But these negative user reviews are so hung up on the idea of microtransactions that they, by and large, entirely ignore how the game actually plays on the court.

Are the microtransactions in NBA 2K19 really so prevalent and unavoidable that they get in the way of actually playing basketball?

I thought I’d have a look at some of the complaints from the 2K community and analyze the validity of their arguments. To do this, I’ll be using actual comments taken directly from the NBA2K subreddit.

“2K makes you a piece of human trash so you feel forced to buy VC.”

I don’t know about a piece of human trash, but is it really all that surprising that you would start as a lowly scrub when you begin your career in NBA 2K19? What were you expecting? That you would start out as an 80 overall without doing anything at all? That would defeat the whole purpose of progression and provide little sense of accomplishment for improving. Yes, your player isn’t going to be very good at all at the outset but that offers all the more incentive to play the game, improve your skills on the court, and this will ultimately lead to accumulating enough VC to start boosting those attributes.

Does 2K make you this “piece of human trash” in order to entice you to buy VC instead of earning it? Sure, that’s certainly part of it. But that doesn’t mean it’s a necessity. You could always grind for VC instead and do it the hard way.

“Grinding for VC instead of paying for it is equal to working for 40 cents per hour.”

I’m sorry, are you being forced to work long hours at some sort of 2K slave labor camp? It clearly must be some kind of horrible predicament that people find themselves in to speak of playing a basketball video game as if they are instead toiling away in a coal mine or doing similarly hard labor.

A friendly reminder: this game is supposed to be fun. If you look at the prospect of playing a basketball video game as some sort of punishment or indignity that has to be suffered through rather than enjoyed, there’s real possibility that this might not be the game for you.

“MyCareer archetypes need to be changed.”

The archetypes in NBA 2K19 are in place to allow you to create specific types of players that do can do a couple of things well at the cost of being limited in other facets of the game. The main reason that people like this want to see these archetypes changed is because they’d probably like their player to be good at absolutely everything instead. In a perfect world, they’d be able to create a 7-footer who moves with the quickness of Westbrook, rebounds like Rodman and shoots three-pointers as if he was the second coming of Steph Curry. Learn to embrace the strengths and accept the shortcomings of your players and focus on what they do well instead of what they are lacking.

The teammate grade you earn when playing MyCareer games is based on a number of factors. You improve your grade with things like good spacing and making smart passes, and negatively impact that same grade with errors like turning the ball over or jacking up bad shots. It’s not a perfect system, as you can sometimes get unfairly penalized for defensive breakdowns where your assignment changed suddenly or even for having your call for a pass ignored, but by and large, you will typically find that your final assessment at least somewhat reflects what kind of teammate you were in any given game.

But there are plenty of disgruntled people that find it far too difficult to put up an A+ game, which would theoretically reward them with more MyPoints and VC for their efforts. They insist that they are being too harshly punished for the few errors that they make and not given enough credit for their good plays. What they are really seeking though is absolute validation after every game that they played the best possible game imaginable and could not have done one little thing better if they tried. But shouldn’t an A+ grade be fairly hard to achieve? How often do real NBA superstars play a perfect game? This should be a lofty goal to aspire to and not a habitual occurrence you see on a daily basis. And honestly, is an A- or a B+ really all that much worse? 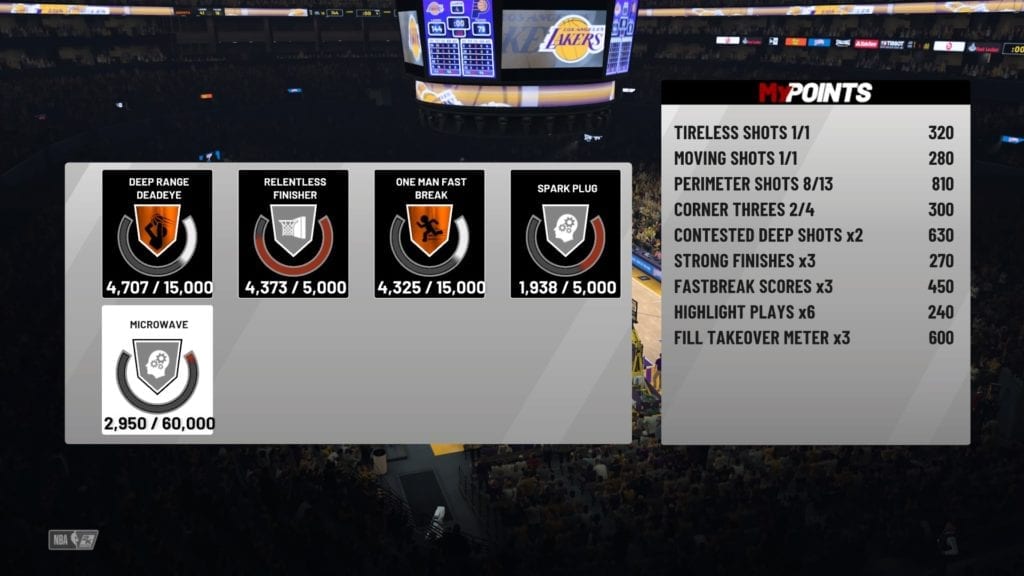 “Wow this grind is something else. Takes forever just to get silver badges.”

Guess what? It takes a lot of practice to become a professional basketball player. You can’t just step on a court and suddenly start hitting shots from all over the court. It’s going to take some time in the team training facility working on the same drills over and over again. It may be tedious and redundant at times, and some aren’t looking for the level of realism that requires them to put in practice (hi Allen Iverson) but this is how everyone gets better. At least you don’t need to put in 10,000 hours, as Malcolm Gladwell suggests. This is a game you probably want to last you months and months (the NBA regular season hasn’t even started yet), a slow progression is part of that cycle.

You know how last year people complained about the annoying cutscenes you had to sit through to make the eternal grind even longer than it already was? Well inexplicably, there are some that want even more of them now apparently? Granted, the mode’s storyline does end a little abruptly after The Prelude and is engaging enough to leave you wishing there was perhaps a little more, but it’s hard to be too upset about the fact that they removed scenes that only really get in the way of you playing more basketball, and that means it should take less time now to get through the grind. Plus, skipping cutscenes was finally given to us and thank goodness for that.

“Trying to play in the neighborhood as a player under 80 overall is infuriating.”

Okay, this can be true (a lot of the time) and it’s the number one issue that points out the issue with microtransactions in this game. And it’s (unsurprisingly) also the number one route to breaking down and buying that VC to make you better immediately. If you go to the Park and start pitting yourself against guys who are 85-90 overall when you might only be a sub-75, chances are the result isn’t going to come out in your favor. This will likely get you thinking about how you could have beaten those guys if only your player was a little better, and before you know it you’re reaching for your wallet. Yes, it would be nice if NBA 2K19 had separate parks for people depending on how high an overall their player is to make things a little more fair and competitive, but until that happens steer clear of the Park unless you’re prepared to go up against players that have better attributes than you. It doesn’t mean you can’t still beat some of those guys, of course, but it will be more of a challenge. This is an issue that becomes less pronounced the longer the game is out, but it’s the number one area where 2K could do a better job if they wanted to keep people from feeling like they “have” to buy VC at launch by splitting up the boosted versus the non-boosted in sensible ways.

“It’s time to get rid of the park and the neighborhood.”

Well, that’s a slightly more extreme view on the same subject I suppose. I get that you might not be enjoying the Park and the Neighborhood, but have you ever considered that there are many other people out there who perhaps feel differently?

“I Can Never Find Games in Jordan Rec Center!!!!”

Yes, here’s another genuine problem that actually does need attention. It takes far too long to find teammates to play with, and while you are waiting you can’t even back out and return to the Neighborhood. To make matters worse, this is a pretty essential mode for anyone who wants to play 5-on-5 online, especially considering that Pro Am mode no longer allows you to drop in and find teammates.

Did you hand-stitch those shoes yourself? Will you be playing barefoot without them? Yeah, you don’t really need those then. Keep grinding!

I….okay, not sure what to tell you here. I guess find a way to get him those sandwiches? That is, providing they don’t cost you any VC.

“Why does everyone want to have a 99 player so quickly?”

Here’s the big question at the heart of MyCareer. And the answer is pretty simple really. Most people don’t want to wait. Most people don’t want to have to put in the kind of effort required to make your player good. They want everything now. I would say to those people in all sincerity: just buy the VC then. But please don’t then turn around and complain that the game requires you to buy VC to play because you know that isn’t true. What the game does ask you to do is play basketball if you want your player to get better. A lot of it. There’s certainly an argument to be made that the game doesn’t reward you with enough MyPoints or VC along the way, but purchasing VC to level up your player is entirely optional. The choice is yours: play the game regularly and give in to the grind, or use a shortcut and invest some extra cash in your player.

NBA 2K19 Patch 1.03 Available - Fixes For MyCAREER, Pro-AM, MyLEAGUE/MyGM and More
Taking a Look at NBA 2K19 MyLeague and Why Sliders Are Necessary