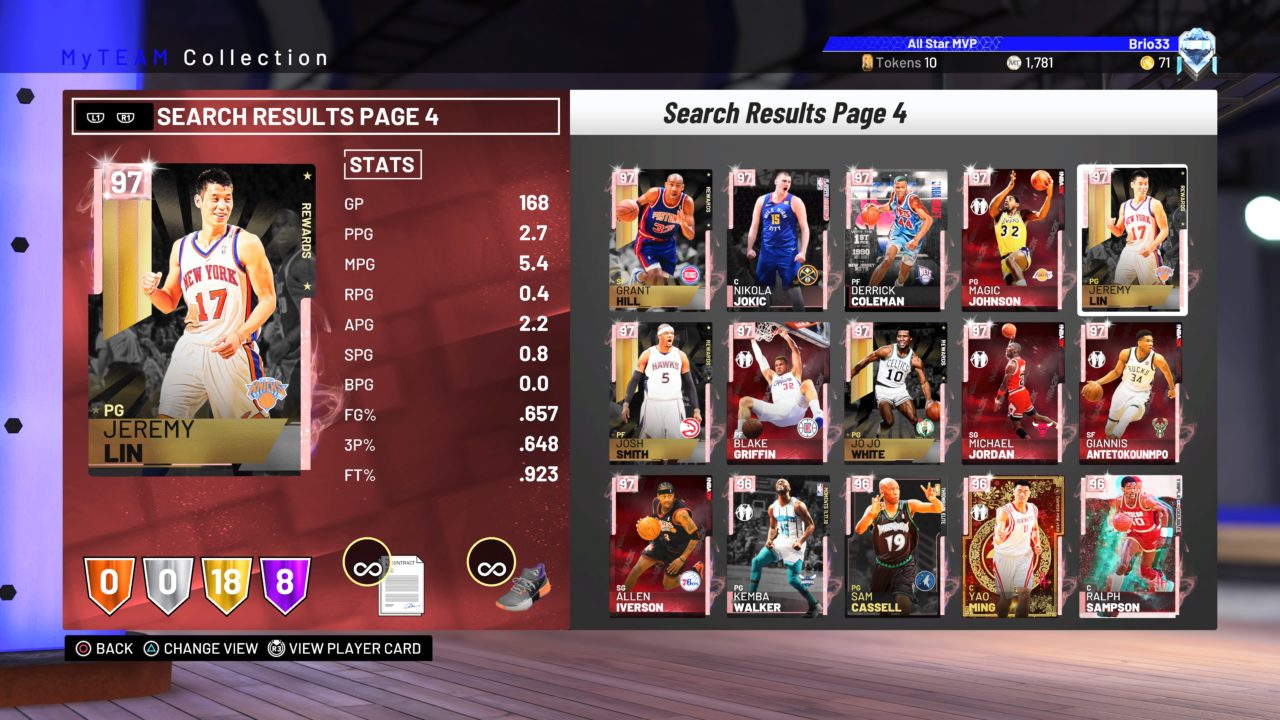 May I present the second annual NBA 2K MyTeam awards! This is where an illustrious panel (of one…me) determines the winners from a broad spectrum of (card-centric) categories. 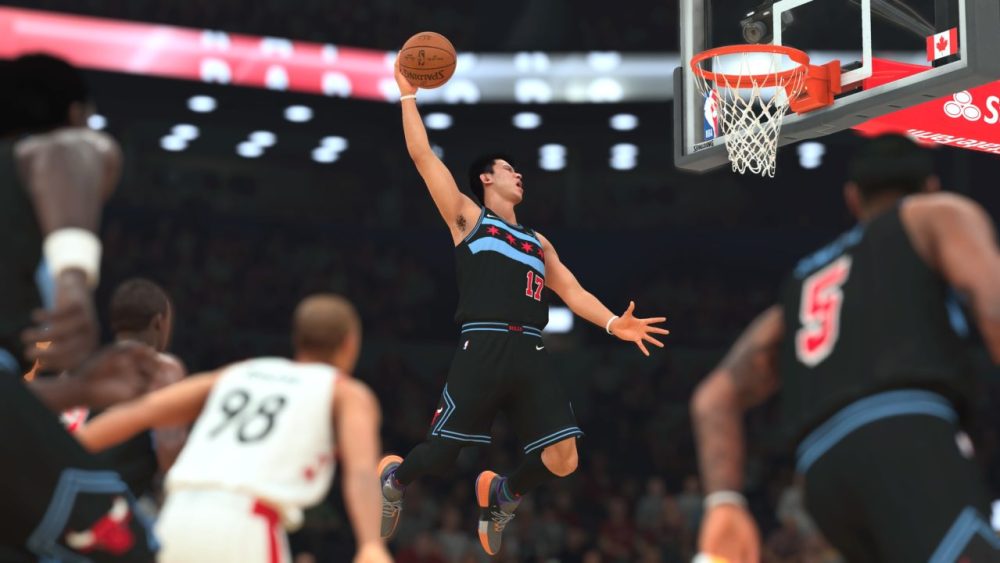 And our first winner of night is Isaac Bonga.

Not because I liked playing with the card, but because he was the lowest-rated player in my collection and found himself at the end of my bench so I didn’t waste contracts on cards I actually cared about. Plus, it seemed like I pulled this card a ton, so I was constantly ‘switching’ the new card for the old one, which refilled the contracts.

Congratulations to Mikal Bridges! Early on, I always needed a solid 3-and-D wing, and Mikal was especially helpful because of his dynamic duo with Donte DiVincenzo. Plus, I’m a Villanova fan, so they played quite a bit.

Toni Kukoc is another versatile wing, but this card was a great playmaker. I love a good point forward, and I always love a good Toni card. So 2K, let’s get this guy a top-tier card next year.

The first token reward card I purchased was Jay Williams, and I used the card a ton. He ran my offense the first few weeks of MyTeam this year.

Last year, Raef LaFrentz won best gold card, and fortunately for me, he got upgraded this year. The pick-and-pop game with Raef (and emerald Jay Williams) won me a ton of games early on.

Morris Peterson is a MyTeam staple (he almost made this list in the emerald category too). He’s a huge guard (6-foot-9), can play defense and most importantly can shoot the lights out. If he had a pink diamond next year, people would go nuts.

I have to give throwback elite Hedo Turkoglu a shout out as an honorable mention here, just because of the cheese factor. But versatility is key for me, especially at the beginning of the year.

A quintessential 3-and-D player, Shane Battier was my first big MT purchase (with the spoils I got for pre-ordering the Legend edition), and he was worth every penny. My best lineup for a while featured Shane plus the last two “award-winning” cards I’ve listed. So again, let’s GET THIS MAN A PINK DIAMOND, or better.

Andrei Kirilenko would probably be the general consensus pick here, but luckily for me, this is my MyTeam awards. So I’m going with Tracy McGrady from the Chinese New Year collection.

Tracy’s card was the first time I had Hall of Fame Deep Range Deadeye and Limitless Range at my disposal, and boy did I utilize it. He was an offensive force, and one of the most exciting days of the year for me was when I actually pulled him from a pack. I remember it because some random person I’d never met sent me a message congratulating me for that pull. Kind of creepy, but it also made the pack opening feel extra special.

I’ll call attention to another honorable mention here (also with amazing HOF shooting badges), and that’s Drazen Petrovic. This card held its value for a long time because of those HOF badges, and his release was perfect.

It’s gotta be Giannis. I hated seeing people online playing him at the point, but I totally understand why they did it. He could attack the basket with the best of them, and was an amazing playmaker. Giannis was easily the first OP card this year.

From the first OP card, to the last (at least that I played with): 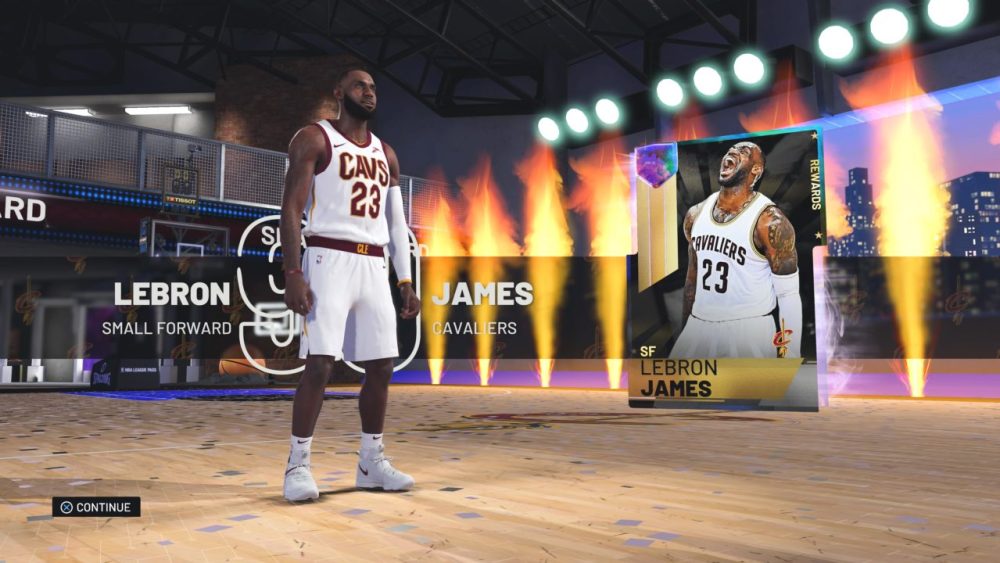 I never got my hands on the collection reward galaxy opal for Giannis, which I imagine was great, but I did get the Throwback Playoff Moment version of the Greek Freak and didn’t feel like he lived up to my expectations. Plus, as I already mentioned, LeBron has a 99 for every single stat, so how could you possibly beat that. 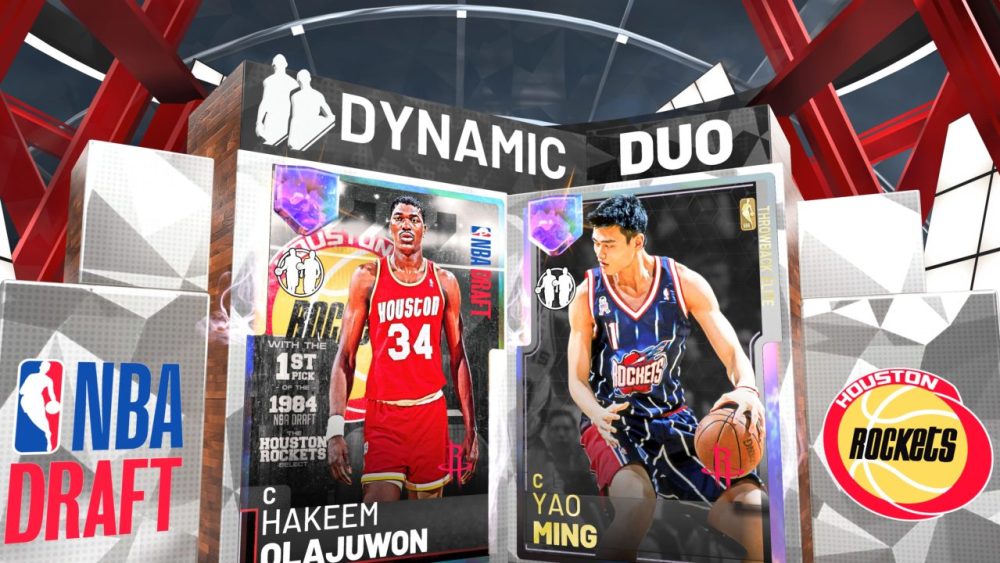 C’mon, who else could this be! The best twin towers MyTeam has ever seen. So awesome.

Look at all of those past and present Houston Rockets! I kind of lost my mind for this set. 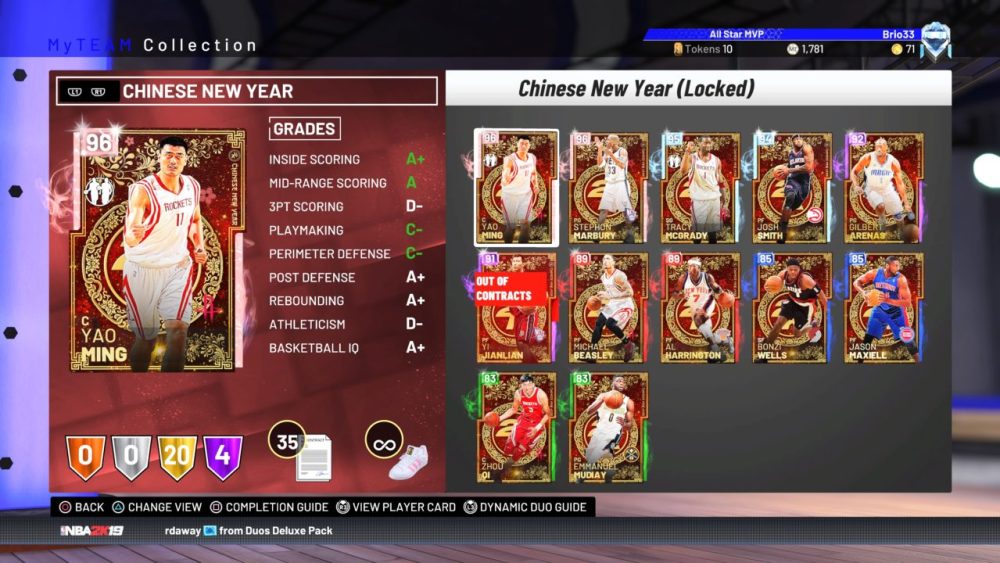 Mainly because of the pink diamond Jeremy Lin collection reward. 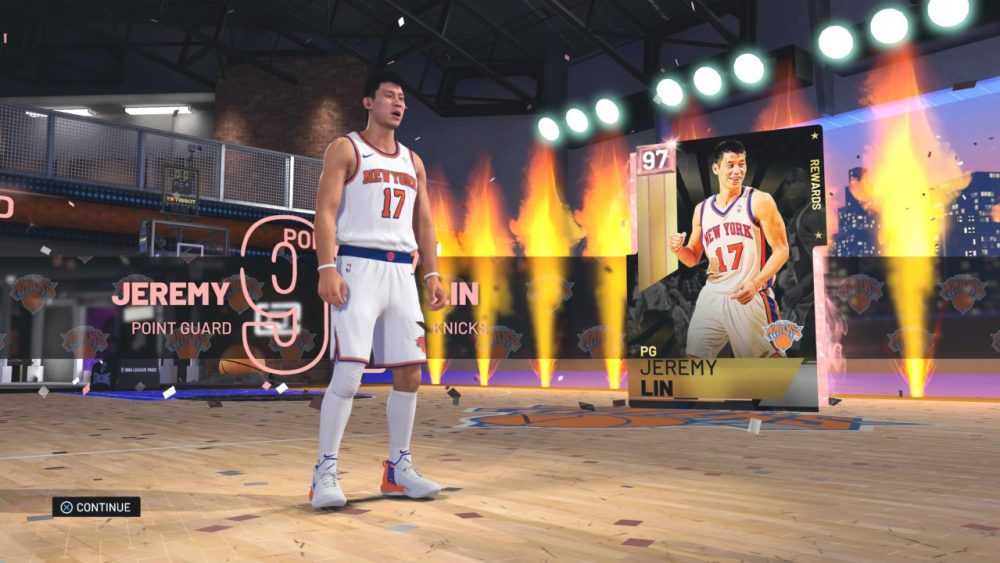 I usually am of the mindset that locking in collections is bad business just because the cards you get become obsolete very quickly. This was definitely the case for Jeremy, who found himself sliding down my bench as the year went on. Which is a bummer, because I love playing with Lin cards in 2K, and this was the best one yet.

Okay, here are all of the big winners together: 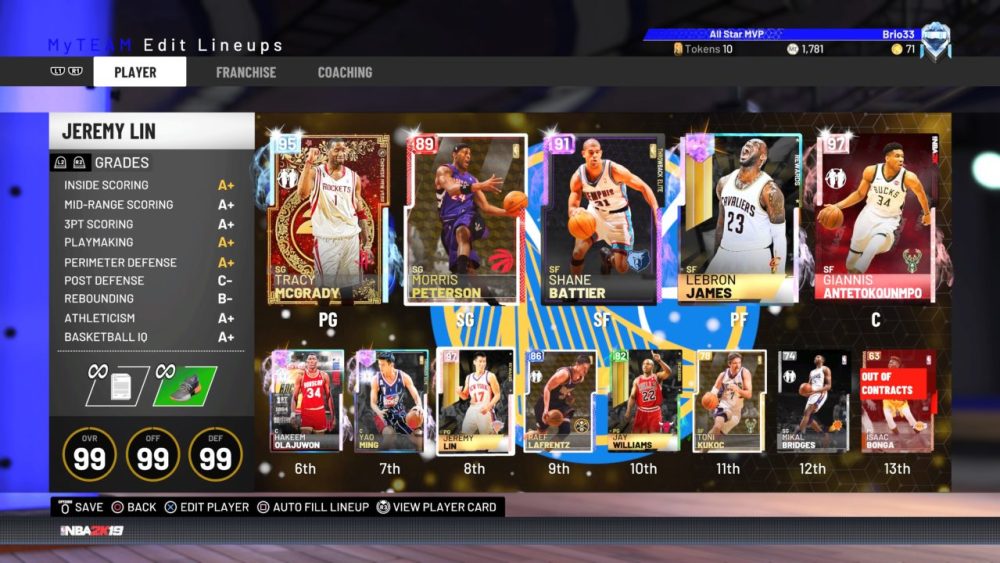 Overall I actually wasn’t a huge fan of the initial card designs this year, at least compared to 2K18. But then, they started dropping Premium Collections (this is a five-way tie!): 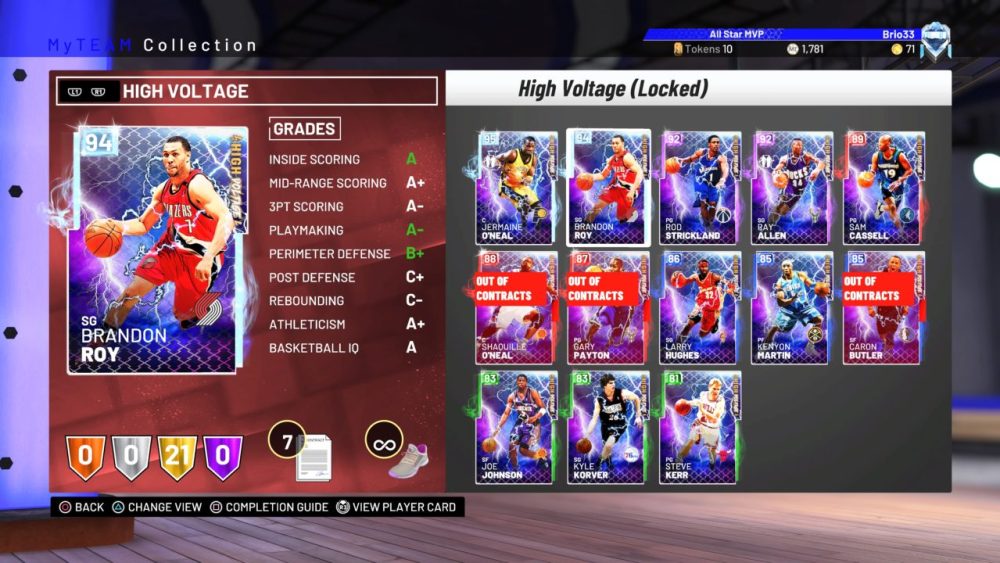 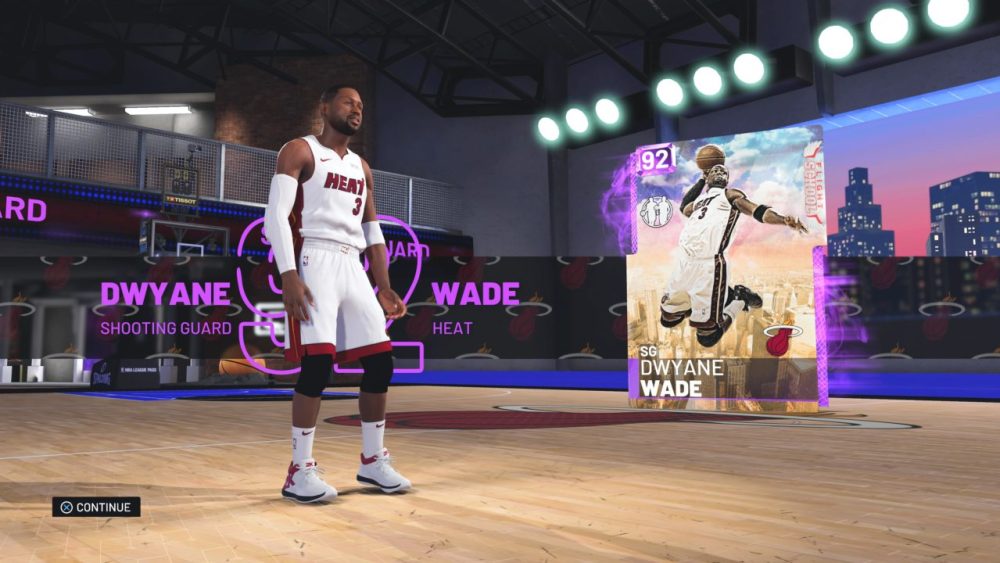 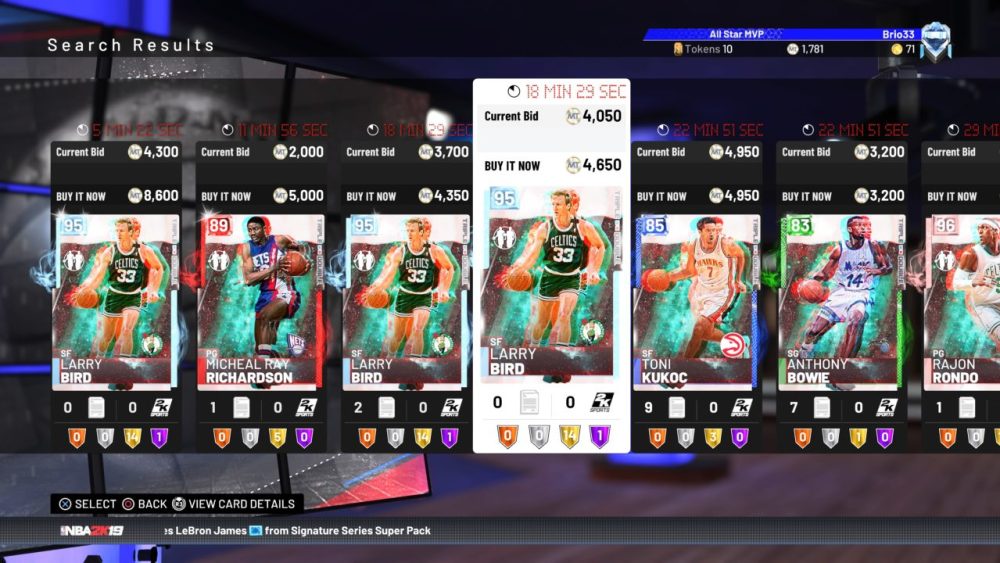 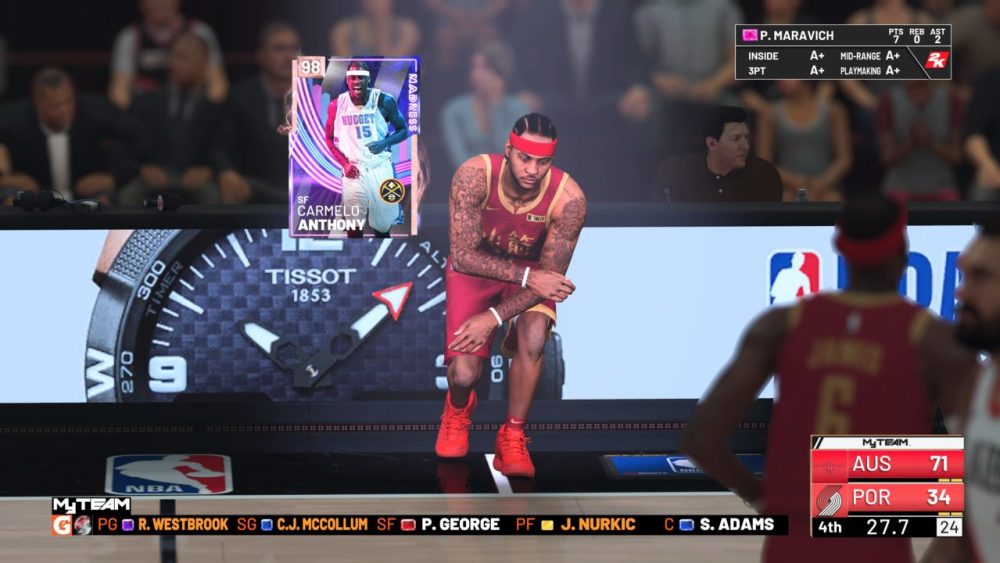 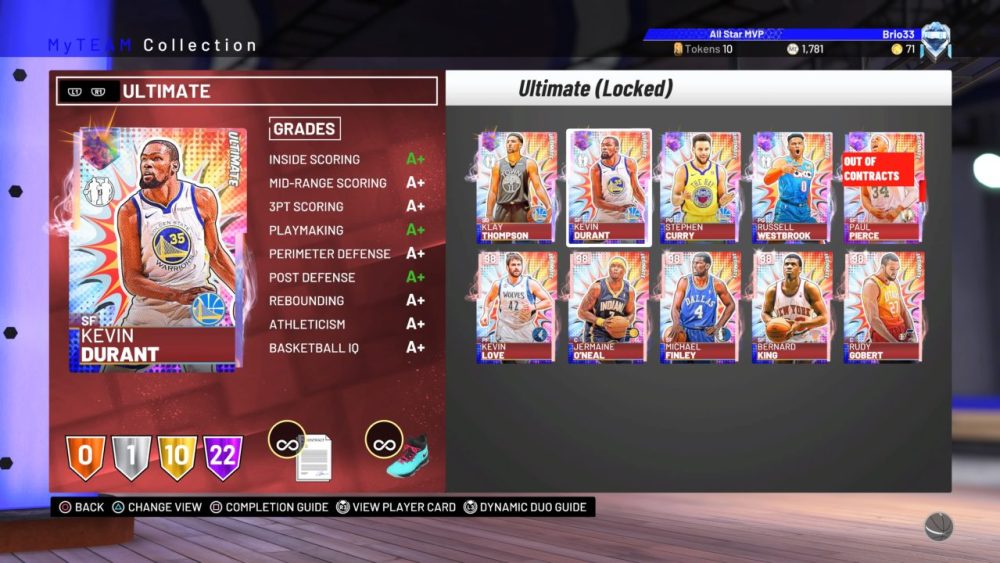 Just look at these beauties. Keep up the good work art team!

I’m going to cheat with this one and say that a ton of galaxy opals were overrated, especially for how much MT they ended up costing. For example, I needed that opal KD to complete the ‘Ultimate’ collection, but the pink diamonds could still get the job done on the court. And I mentioned Giannis already, but I way overspent for his opal when the pink diamond was viable throughout the year.

The moral of the story for me is just to be patient and not waste MT on cards you don’t need right at that moment. There’s this weird urge to get whatever is new and shiny, but when it comes to winning games, newer isn’t always better. Case in point, see the next category…

My Most Utilized Card

I’m a big LaMarcus Aldridge fan, and when he somehow got a pink diamond Moments Card early in the year, I had to have it. And for it being an early pink diamond without a lot of competition, it wasn’t insanely expensive on the auction house.

So I think it’s safe to say that I got my MT’s worth as he played in 178 games for me this year. 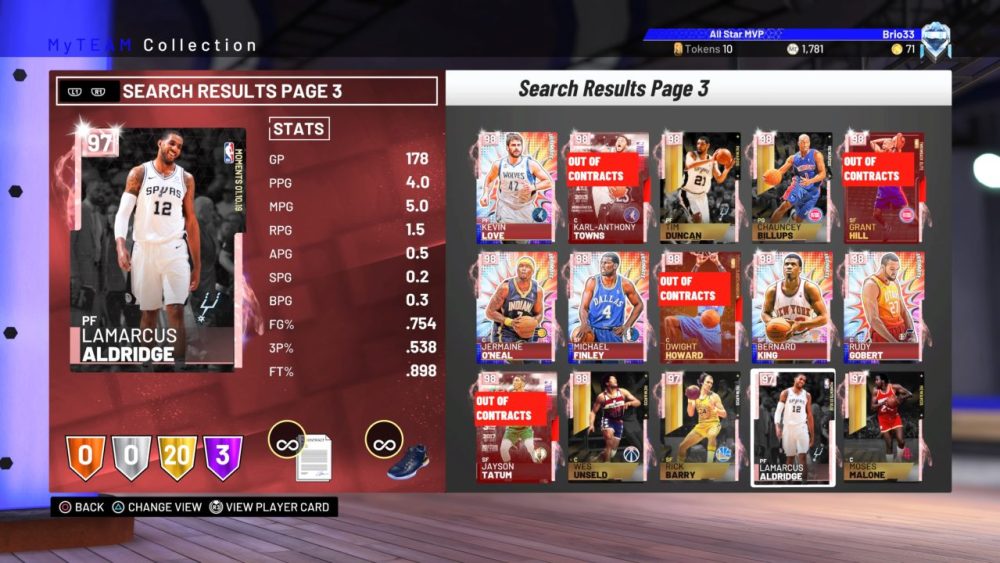 Maybe next year the dude can get himself a galaxy opal (or whatever the best card tier is in 2K20).

My Most Efficient Deep Range Shooter

I’ve got a thing for stretch forwards apparently. 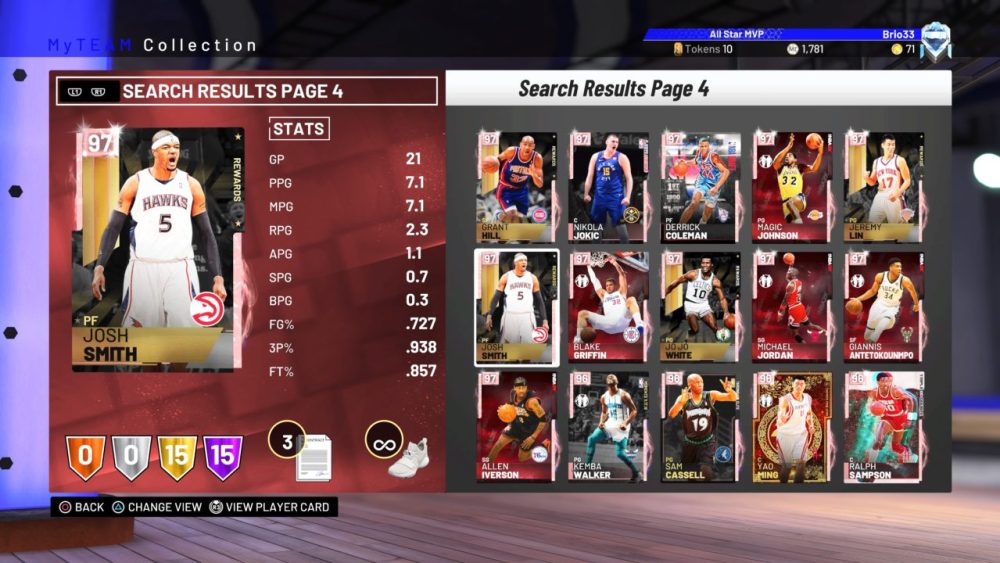 My only criteria was for the category was to have played in more than 10 games. Otherwise, it would have been Klay Thompson, who in three games never missed once from downtown. But when you take into account Josh Smith’s athleticism, defense and long range shooting ability, this was a fantastic use of tokens.

With Josh, LaMarcus and Jeremy, I really should rethink my “Best Pink Diamond” category. So many great pink diamonds this year. Plus, the old saying applies here as well — you never forget your first. 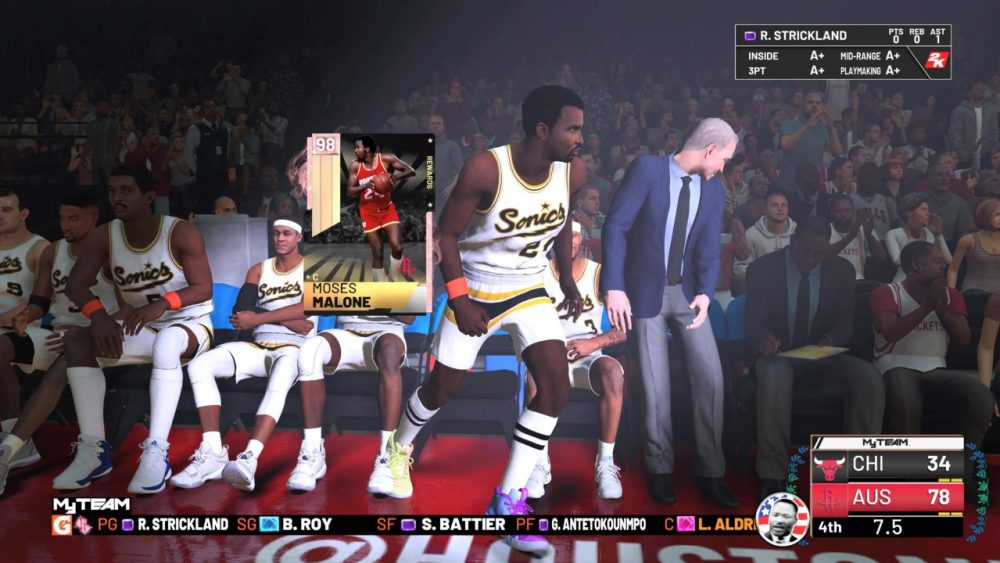 Well, that just about wraps up the second annual MyTeam awards.

Next time I’ll list some changes/ideas for 2K20 that I’m hopeful will make it into MyTeam. Have a great week and I hope you’re enjoying the 2K20 demo as much as I am.