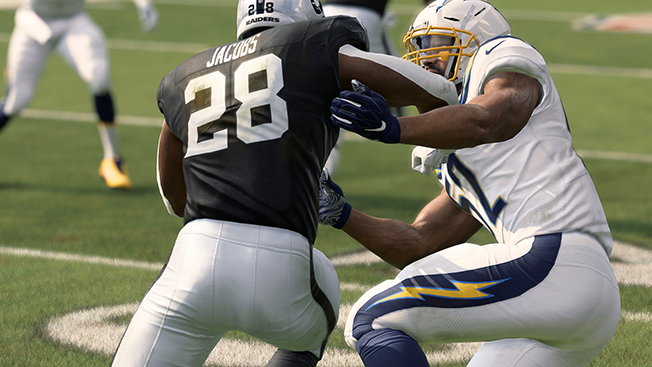 As we’ve reached about the halfway point of 2019, we’ve already seen the release of one major sports title earlier this year with MLB The Show 19 and all of the other usual suspects are due to follow in the coming months. While it may not be too long now until all of these games look and play significantly different than they do now once we see the inevitable roll out of new systems, there are still plenty of improvements that could be made to all of them on this current generation of consoles. Here’s a selection of the biggest issues these AAA series can address now to maximize enjoyment from playing them.

Most people who play MLB The Show every year would probably have to admit that the game is in a pretty decent state at the moment. The developers definitely made an effort to listen to the feedback from the community for MLB The Show 19 and it shows in the refinements they have made to the game.

Now is it perfect? Of course not. For as long as the game has been around, and for probably as long as the game will be around, people will continue to gripe about the randomness of the results at the plate. Things are definitely better than they were last year and good PCI indicator placement yields better results than in previous years, but there are still instances where you’ll make outs with good PCI placement just as you’ll get hits occasionally from not-so-good PCI placement. To some extent, there’s at least an argument to be made for the game of baseball having some unpredictability when you’re trying to square up a small round ball with a wooden bat. As always, this aspect of the game could still use some work in order to widen the skill gap and make the game more rewarding for competitive players, but there’s a bigger problem than that facing anyone who wants to pit their skills against others.

There’s just no good excuse at this point for a series as popular and profitable as MLB The Show to not have an online franchise mode in 2019. At a time when developers should be clamoring to find a way cram more features into their sports games, MLB The Show decided a couple of years ago to remove the option to create an online franchise that you could compete in with a group of friends (or enemies, if you preferred). Why? Something about freeing up space on the servers for more Diamond Dynasty games.

This would appear to be a rather simple solution: bring the mode back. Take some of the money that you’ve made in Diamond Dynasty from enticing people to buy packs, and re-invest that in a mode that might not have the same potential for revenue as Diamond Dynasty but still holds plenty of value for players who prefer an organized league format when trying to build a contender.

There are plenty of candidates for things Madden could improve upon, from smaller cosmetic items to glaring gameplay bugs, but in trying to focus on the more pressing matters, that list of possibilities gets whittled down further. There’s always the stale state of the series’ franchise mode to bemoan, which tends to get little attention year after year, but I’m going to go instead with something that affects anyone trying to go head-to-head against other players in any online mode.

That’s right, it’s the online play-calling cheese that earns top (or bottom) honors for what’s most in dire need of some correction in Madden. If you want to compete against others online, it’s incredibly annoying and discouraging to have to constantly go up against players who insist on running the same two or three “money” plays every single time. But there’s a good reason why they do it, of course: it works!

Now, this is when people out there are prepared to jump in and assure me that I am wrong and there are definitely ways to counter every single cheese play in the book. You see, you only have to make about 12-15 pre-play adjustments to ensure that your AI defenders are in the right place and behave in the appropriate manner to break up the one play your opponent won’t stop running.

There has to be a better way. Perhaps the best suggestion I’ve heard to combat this prevalent problem is to increase defenders’ awareness or reaction abilities if users want to dial up the same play on every down, as in real football there’s just no way NFL-level players are not going to be able to shut it down if the offense continues to go back to the same well repeatedly.

It’s hardly a secret at this point that EA’s NHL series doesn’t have nearly the same kind of resources to work with from as Madden and FIFA, by virtue of simply not being as popular as those other titles. Despite that obvious limitation, I may be in the minority in thinking that NHL 19 managed to improve upon its predecessor by leaps and bounds. The skating feels more fluid and realistic than in NHL 18, poke checks are no longer viable from the same impossible angles that regularly went through bodies, and puck pick-ups (while still not perfect) have proven to be at least a little more natural and intuitive.

While developers still haven’t found a way to fix the nagging “dressing room error” that continues to plague 6-on-6 team play in World of Chel, it’s hardly a significant enough disruption to ruin a mode that’s easily one of the most fun in any of the sports video games when you’re surrounded by the right people.

Instead, it’s within the head-to-head competitive play where you’ll find the biggest headaches, with overpowered scoring techniques, questionable AI and gameplay that doesn’t resemble real-life hockey being just a few of the most severe drawbacks. One of the biggest hot-button issues along these lines is the use of the L2 or LT button to twist and contort the puck carrier in various ways to protect the puck. At its best, it allows players to be a little more creative in their movements with the puck, but at its worst it’s been widely exploited by some of the top players in the game by allowing them to keep possession of the puck while consistently skating backwards, and forcing defenders to either take a penalty with a poke check or stick close and wait them out.

It’s just one area where the competitive play, from both a playing and viewing standpoint, lacks excitement and polish. If you watch the top players compete on the biggest stage, you’re likely to see mostly one-timer goals or other goals off shots from angles that have been carefully practiced in order to best exploit the goaltender AI. Furthermore, there are also still too many players that are able to thrive using “skill-zoning,” a tactic where players allow the slightly overpowered AI defenders to do the majority of the work, which only helps to reduce any skill gap the game may have.

It’d be nice to see any and all of these exploits reduced, if not removed entirely in NHL 20, as well as an added emphasis on tethering a puck-carrier’s moves to something closer to reality, while still offering the freedom and creativity for elite players to showcase some superior skills.

If the measure of an annual sports release is how much the game has improved from one year to the next, NBA 2K19 has to be considered largely a success. The community’s gripes about annoying cutscenes (looking at you, B Fresh) that you couldn’t skip within the MyCareer mode, and frustrating blow-by animations when trying to play defense on the court didn’t fall on deaf ears. But despite all of the improvements found both in the game modes and in the gameplay, there was one huge community complaint the developers appear to have ignored completely, unless they simply weren’t able to hear everyone because they had too much cash stuffed firmly in their ears.

Microtransactions. One need only take but a cursory glance at the user reviews for NBA 2K19 over at Metacritic (where it’s currently averaging a 2.5 score out of 10) to figure out the most popular complaint that people have with the game. Quite frankly, everyone is tired of having to pay money if they want to be able to compete in MyCareer. The seemingly endless grind to improve your player from a hopeless scrub to even just someone approaching basketball competence has been made so ridiculously torturous by NBA 2K19 that they’re obviously counting on most people to just pony up some money instead to shorten the process.

And even if you’re dedicated enough to incrementally improve your created player at the glacial pace demanded by the game’s progression system without spending your hard-earned cash, don’t expect to be able to switch things up and create another player with a different archetype without putting in the same amount of grind (or money).

In a post-Fortnite world, it’s not really a problem these days to ask people to pay some extra money for in-game cosmetic purchases that don’t alter your abilities — if someone wants to spend their money to wear a funny hat or something, go for it — but it’s another thing entirely to expect people to pay in order to actually have any discernible skills with a basketball.

It wouldn’t be hard for NBA 2K19 to implement  a system similar to NHL 19, where you can easily select between a bunch of pre-made archetypes that each have their own strengths and weaknesses before every game, but this would inevitably come with the kind of loss of revenue that a business likely isn’t prepared to readily accept. So until enough people stop being complicit by agreeing to pay extra for their archetypes, this large-scale problem doesn’t look like it will go away.