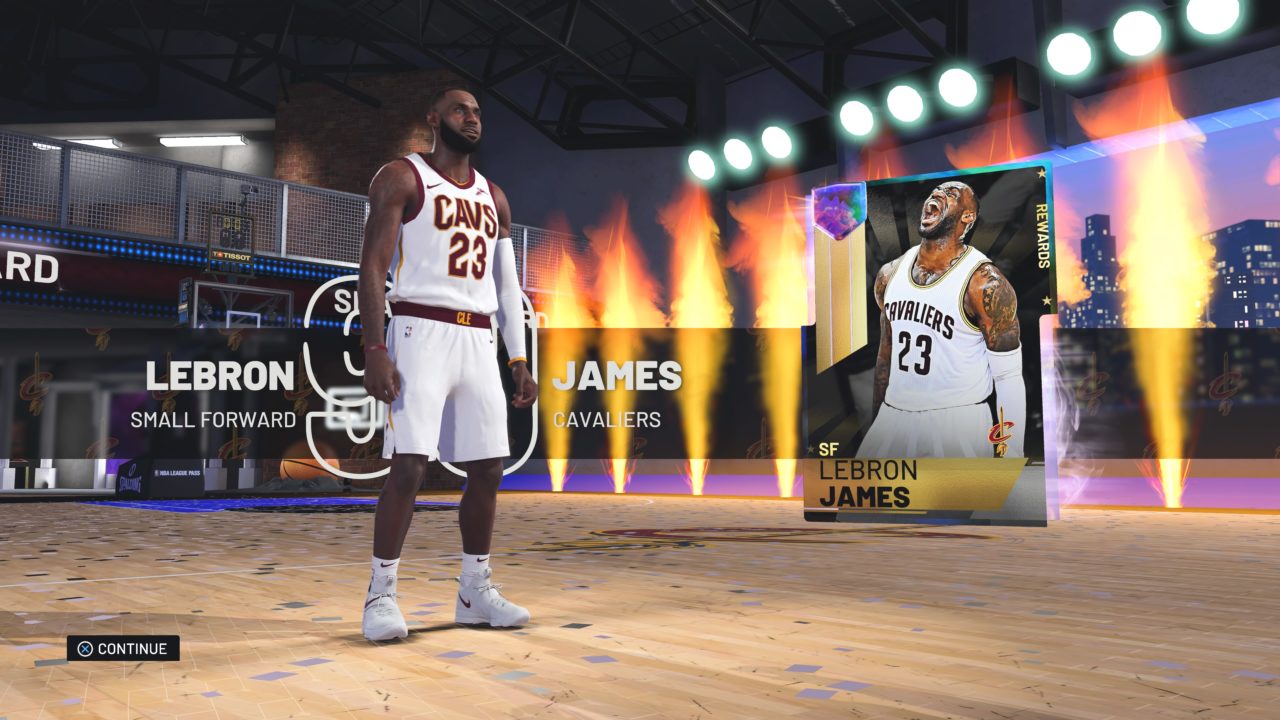 Another year of MyTeam has come to an end. 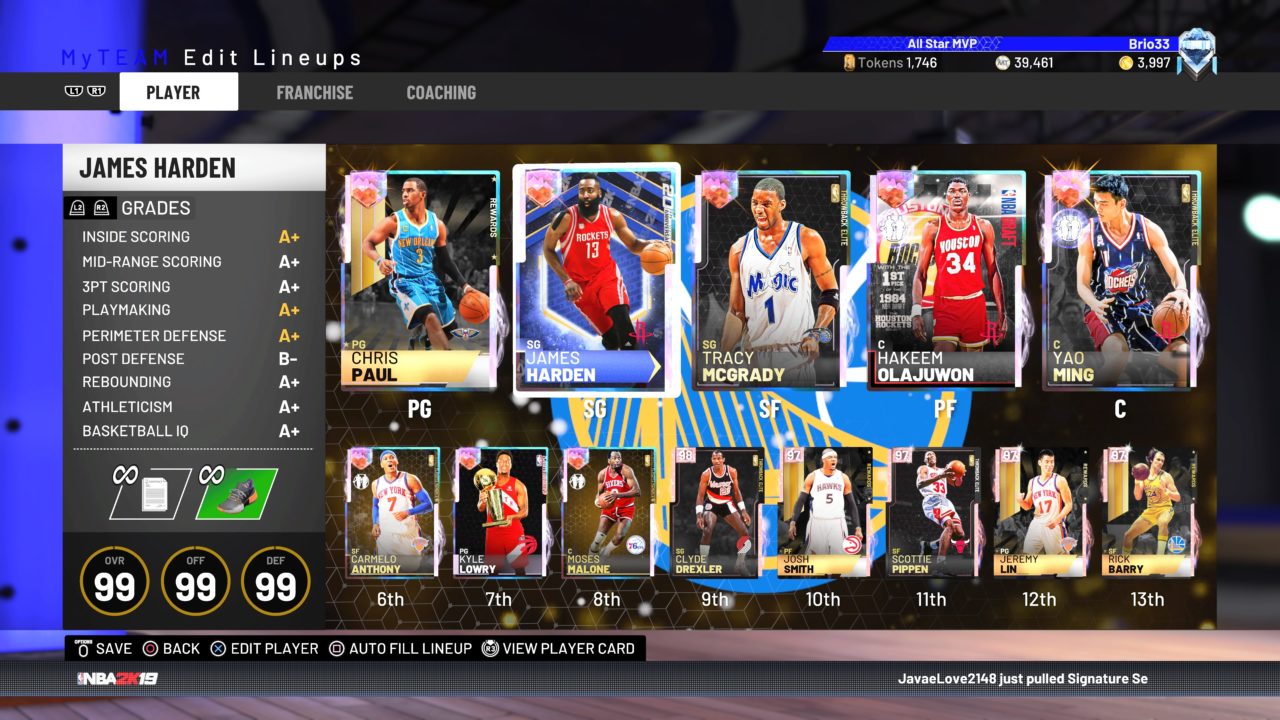 A couple of weeks ago, my final lineup looked like the picture above. But after all the packs were re-released and the final auction crash of 2K19 shook the servers, my ‘final’ final lineup actually looks like this: 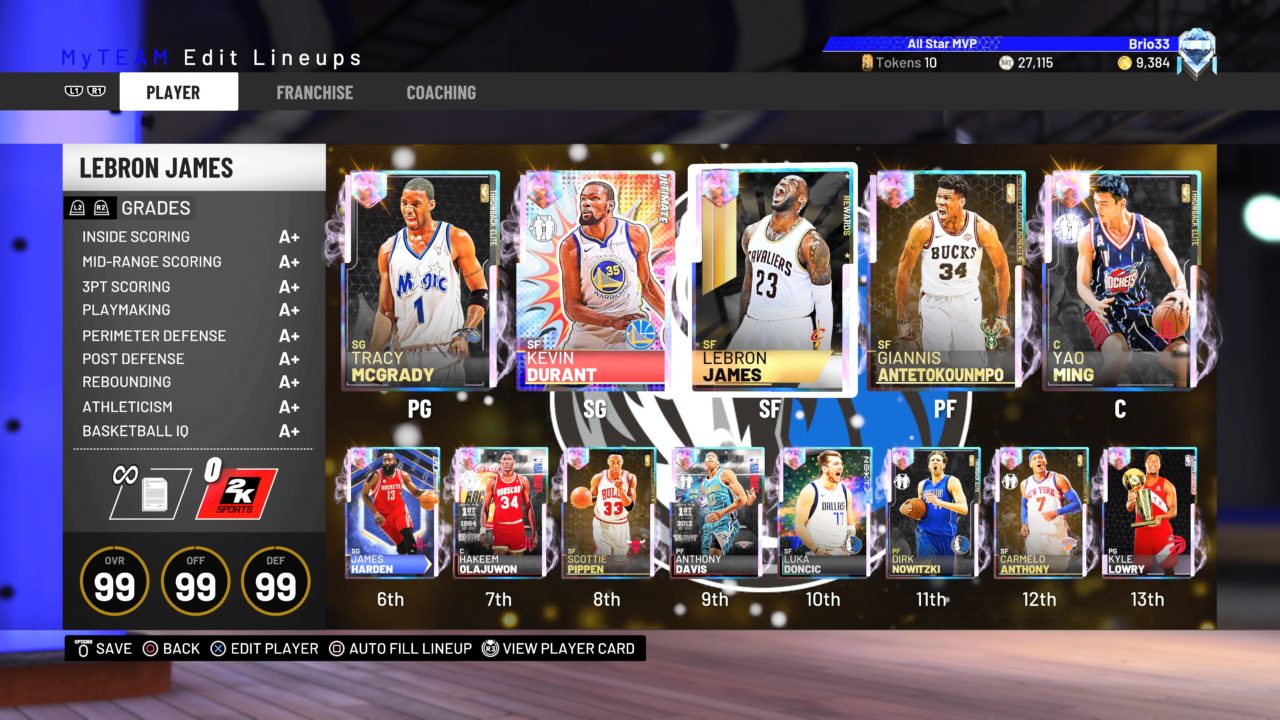 I used up all of my tokens and MT to essentially audition whatever top cards I wanted in order to assemble this team. It’s easy to say that this is my best ever end-game lineup, but it definitely came at a cost. Financially speaking, I spent more than I ever have on MyTeam: nearly $600 in VC, on top of the initial investment of the Legend Edition of the game. I also put more time into playing the game and working the auction house than ever before. So the question now is, was it worth it?

I did get more entertainment-value and overall enjoyment out of MyTeam than any other game mode, or actually any other game that I played in the past year. So in that sense, I do think it was worth it. However, I don’t know if I’m completely satisfied the same way I would be after finishing an especially engaging story-centric game. There’s no real sense of completion in MyTeam. There isn’t an ending to strive for or a championship to be won. It’s basically just the lineup you leave behind when you turn the game off for the last time. 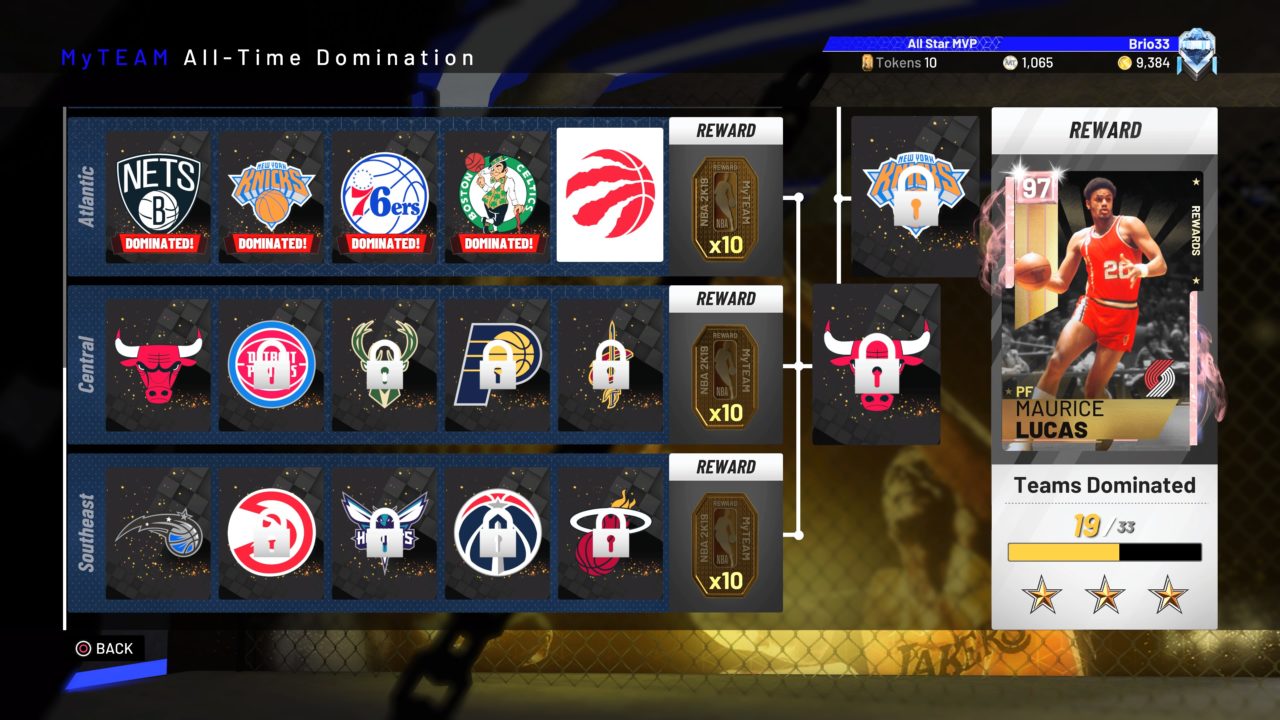 Now I love Domination more than just about anything, but as you can see, I didn’t even finish it. I only have a handful of games to go, but decided it wasn’t worth it to get that pink diamond Maurice Lucas. I also don’t play online very much, but even if I did, what’s the point? Going 12-0 to get Jason Richardson or whoever  would be cool, but unless I’m so good at the game that I’d have a chance to win the $250,000 MyTeam tournament, I’m not ever going to be that interested in struggling against the servers. Triple Threat is really cool and a nice addition to the game, but it has no ending, just the ability to earn six tokens forever and ever. And that’s about it for game modes.

In the future, I’ll go through my hopes for next year’s game and better rewards will definitely be on the list, but the bigger issue is that I’m not even sure what kind of ending I’d want. Could there be a way to win a championship somehow like in MyLeague or MyCareer? Or is it really just about the journey or the grind.

I need to put some more thought into that. What do you think? 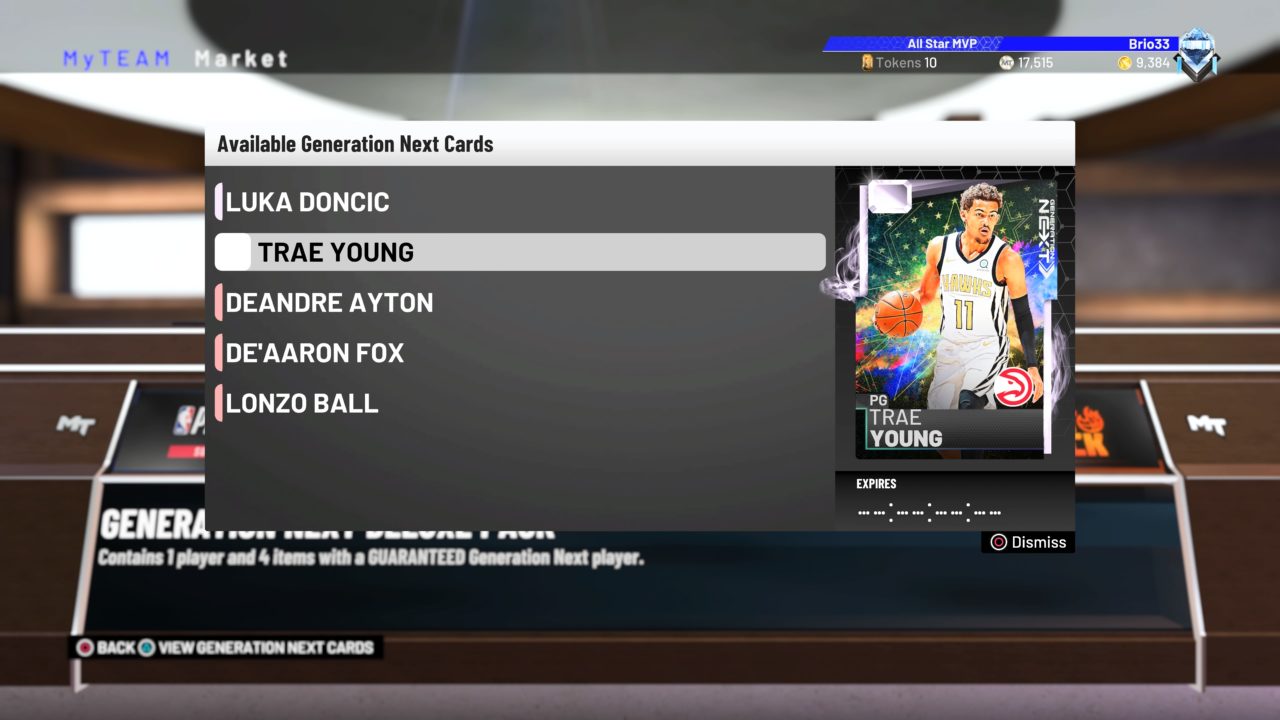 Speaking of the grind, I mentioned earlier than I auditioned all of the best cards to put together my lineup. That’s not 100 percent true.

I did kind of want to get the opal Ben Simmons, and the needle in the haystack card for that collection is Trae Young. I figured I might as well spend my last bit of MT to try and get Trae, then I could make a last push to complete that collection to get Ben. Then maybe I’d feel like it was done. 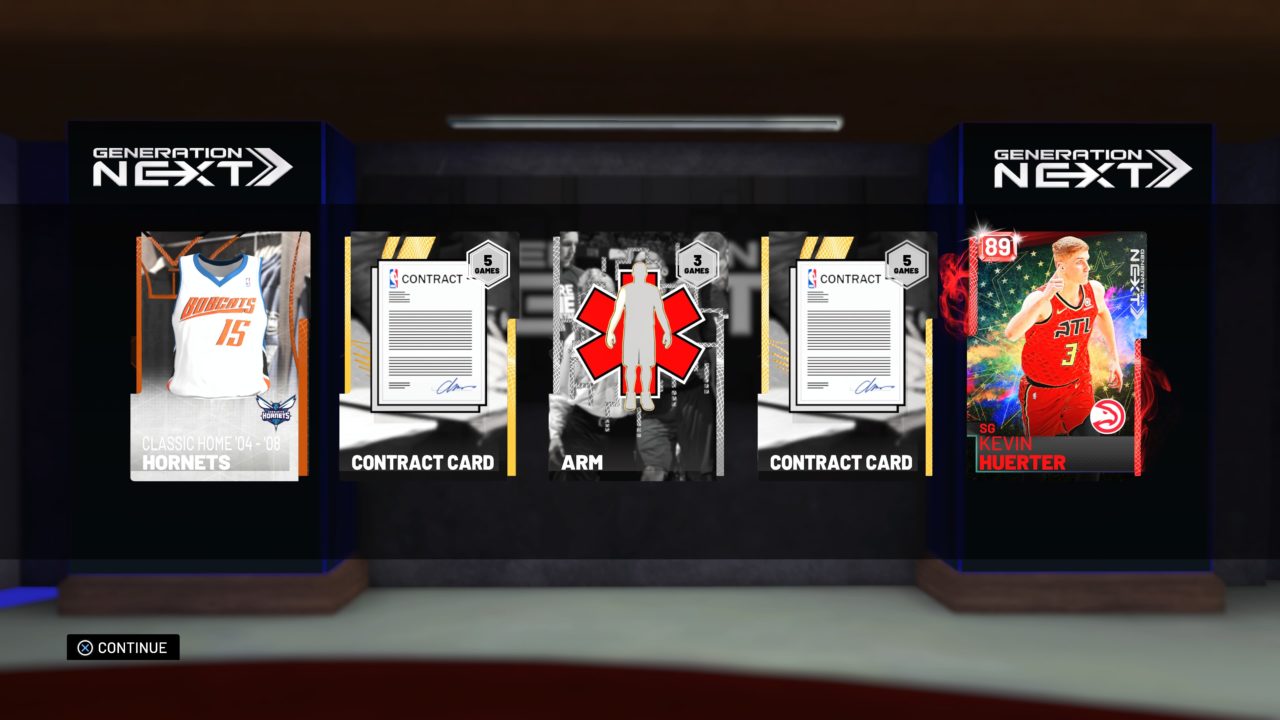 Trae didn’t want to magically join the squad (and he’s still insanely expensive in the auction house), so that was it. I just turned off the game for the last time.

The 2K20 demo is a few short days away, and hopefully by the time you read this there will be some information about what is coming in next year’s MyTeam (yes, I did pre-order the Legend Edition of 2K20), but for now I think I’m going to enjoy the break from card prices and lineups and go play a little Spider-Man.

You remember Spider-Man, don’t you? It came out literally the same weekend as 2K19. I pre-ordered both but ended up only playing Spider-Man about two hours. Total. And Spider-Man is a really good game. But there’s only so much video game time to go around, and it’s a testament to the fine folks that made NBA 2K19 that I kept coming back to this — 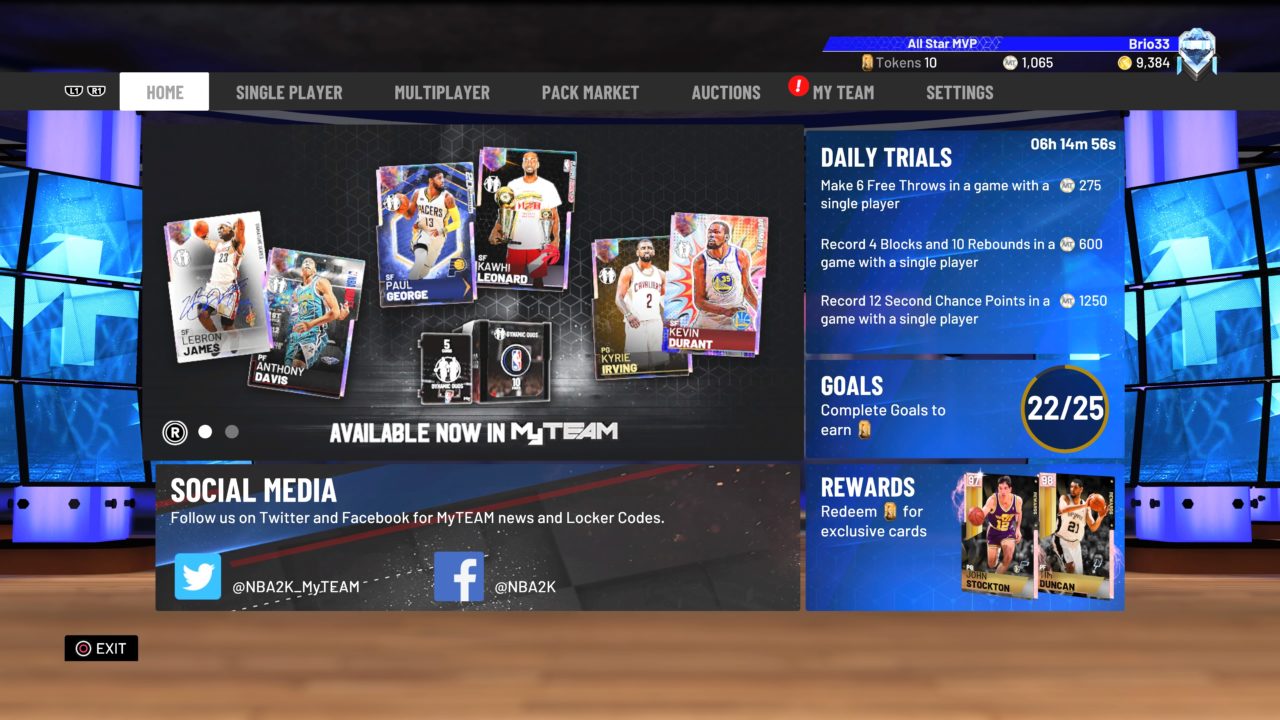 — day after glorious day. Goodbye, 2K19. I know I complain a lot, but overall, it’s been a great year.