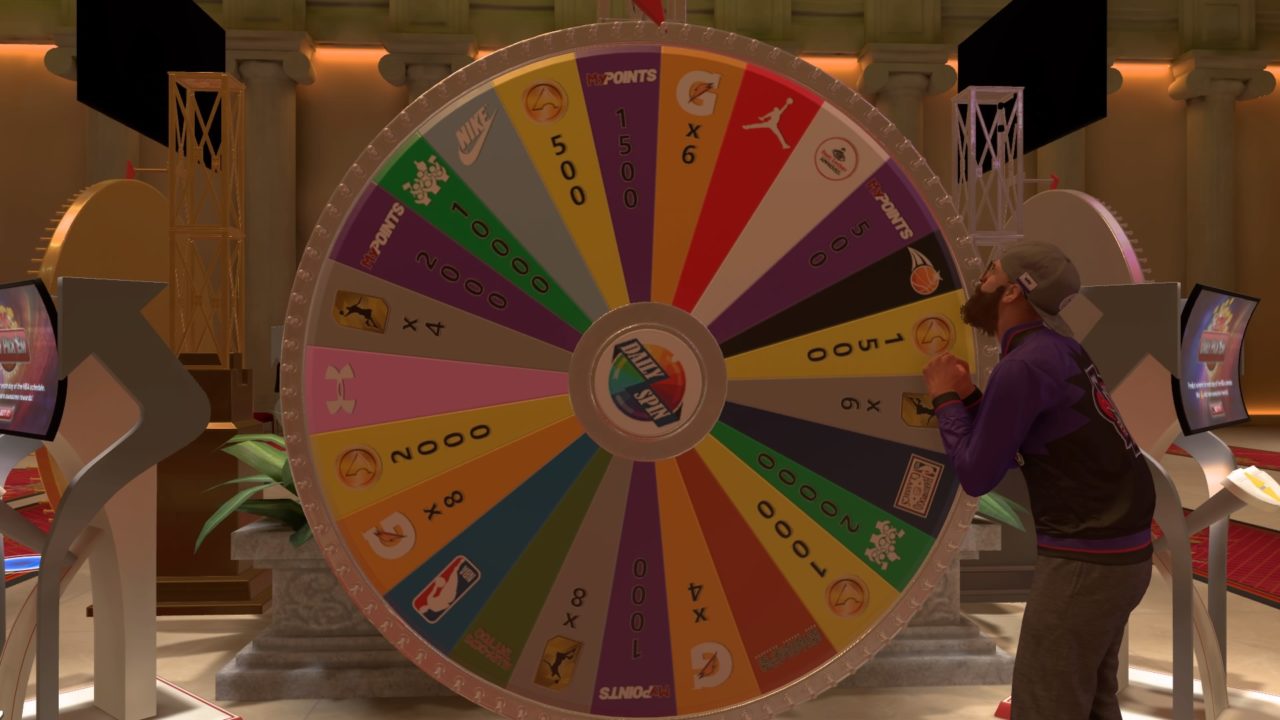 Even with NBA 2K20 right around the corner, a game cycle is never really over until the successor officially hits shelves, and there are still plenty of important issues to discuss when it comes to NBA 2K19. It’s time to take a deeper look at something many NBA 2K19 players do every day like clockwork, and they probably don’t even give it much consideration. That’s right, we’re ranking the prizes you can win in the Neighborhood’s free daily spin. Look, it’s summer, we’re having fun here!

But first, a rant. Why doesn’t the game actually show you what you’ve won when it comes to the different items from various sources? It would be great to know that I’ve won some amazing white tape for my fingers without me having to cycle through my entire inventory and figure out what’s different like some newfangled version of the game Memory.

Important note: I’m a 91 OVR so I don’t have access to any of your VIP wheels. This will be strictly OG wheel rankings only. Also, these are the definitive official rankings and not in the least subjective.

Now, let’s count them all down from worst to best.

I’ve concluded that the worst absolute prize you can win with a daily spin has got to be 500 VC. With the price of VC being what it is, 500 VC has an approximate value of $0.30, and even 2,000 VC has an approximate value of only $1.20. Winning VC doesn’t really make your player any better (unless you’re just starting out or recently reached a new OVR level), nor does it really give you anything tangible for your spin. It’s like finding a quarter in the street, a nice find but it won’t go a long way.

In general, every little bit counts when it comes to improving your player, but in a slightly more specific and accurate way, 500 MyPoints barely counts. It’s not even enough sometimes to get you even 0.1% closer to breaking your cap and improving your overall rating. 2,000 MyPoints will at least see that bar going up ever so slightly, but it’s still just another drop in the large bucket that needs to be filled. The only reason I’d ultimately prefer the MyPoints over the VC is because it feels like it’s getting me closer to the ultimate goal of becoming a better player.

Look, I love my fans. And I appreciate each one who decides to worship at my altar. So when I get 10,000 or 20,000 new fans, it’s not something I take lightly. I’m especially grateful for how every new fan gets me that much closer to a new endorsement deal that I can turn into more VC. Now, I don’t want to brag or anything, but I do have millions of fans at this point, so it’s a little difficult to feel the tangible effects of getting a handful of new fans (relatively speaking), which is why this strange phenomenon of gaining new fans through a spin of a wheel — it begs the question: are they fans of me and my basketball skills or just wheels and spinning? — has to rank this low on the list.

I’ve won this prize enough by now to be, as the kids say, “tatted up.” While I’d like to tell you all my ink is an expression of who I am as a person and there’s a story to every single piece adorning my body, I can’t do that because they are all exclusively large letters that were randomly awarded to me. That’s right, I have a big “P” on my left shoulder, a giant “R” on my right shoulder and an “S” on my left calf. Sometimes I’m not sure if I’m a basketball player or a Wheel of Fortune puzzle waiting to be solved. Regardless, I’d obviously value this prize more if I could actually choose my tattoo.

I know I’ve won Under Armour prizes before, but they’re often such inconsequential pieces of clothing that I either don’t wear them at all or they end up being worn under other clothes so that you don’t even see them. This is how I’ve ended up with some sort of camouflage compression thing for my left leg that might be providing some sort of comfort or support from my player, but I certainly don’t experience any sort of difference on the court, and to be honest, it’s just kind of an eyesore. But hey, it’s still better than a tattoo.

Getting a gift from the NBA Store via your spin can feel a lot like Christmas morning. In your mind, you have high hopes for something extravagant like a jersey or some other similarly cool piece of team-specific attire. But when you go to open your gift (or in this case, when you finally find the item in your inventory), it usually just ends up being another pair of socks. Yes, they might be a pair of Cavaliers socks, but they’re still just socks.

There are a lot of different items you could possibly win from a Swag’s spin prize, but the unfortunate reality is that only means there are plenty of opportunities to win pieces of clothing or items that you would never really want in the first place. For every time that you win a shirt or a pair of pants that you actually like, there will be two or three others where you end up with something silly and frivolous like a pinky ring or a wristband.

To be honest, I almost never make the trip home to MyCourt. Between the loading times required to go up that elevator and the fact that there’s not all that much to do when I get up there anyway, it’s really not a priority for me within the Neighborhood. But what makes these MyCourt items fun to win for someone like me is that if you win them every once in a while, and only occasionally go back to MyCourt much like I do, it becomes pretty fun to find out what sort of stuff you have actually accumulated from those victories when you do finally venture back there. “Whoa, I have some new arcade machine now? Cool!”

Who doesn’t want to have a pair of Air Jordans on when they’re running around the Neighborhood? It’s not like you’ll get to choose the brand of Jordans that you win, and there’s always the possibility it could be just a Jordan T-shirt or something, but it’s always a nice feeling to be able to add something to your collection that’s been endorsed by the GOAT himself.

If you like shoes, then this is the prize for you. This is ranked slightly higher than getting a Jordan item because, no matter how much you might like MJ, there are likely other brands of shoes that are sure to catch your eye as well. This is how you end up with an assortment of shoes repped by the likes of Steph Curry, Chris Paul and Paul George that you can choose from depending on your daily preference.

See above, but slightly better, I guess? To be honest, I’m not really sure what shoes I earned from which spin at this point. If only there were some way the game could actually inform me how I acquired each item.

I’ve won so many of these, and I know they might just be silly cosmetic items and that everyone else probably has the exact same jerseys in their collection, but that doesn’t change the fact that it’s just fun to rock an old-school Lakers Shaq jersey every now and then. These spins have provided me with a whole collection of jerseys I can cycle between based on how I’m feeling on any given day, and I haven’t had to spend a dime of VC on any of them.

Finally we get to some prizes that can actually help you on the court. No matter how many Gatorade boosts you win, these will ensure your player doesn’t get tired quite so easily when you’re playing a game. It’s especially crucial if you’re a point guard who likes to dribble a lot, as your extra stamina will keep you from having to coast on fumes and operate at a clear disadvantage compared to your opponent.

And now we come to the most coveted prize on the wheel, the one that can improve your player’s performance across the board. If you’re lucky enough to consistently win the skill boosts, they’ll keep your player’s abilities so far beyond their potential that they’ll surely make you forget about any shoes or other items that you might not otherwise have in your inventory. Other people can have all the fly cosmetic items they want; I’ll continue to take improved performance over those every single time.