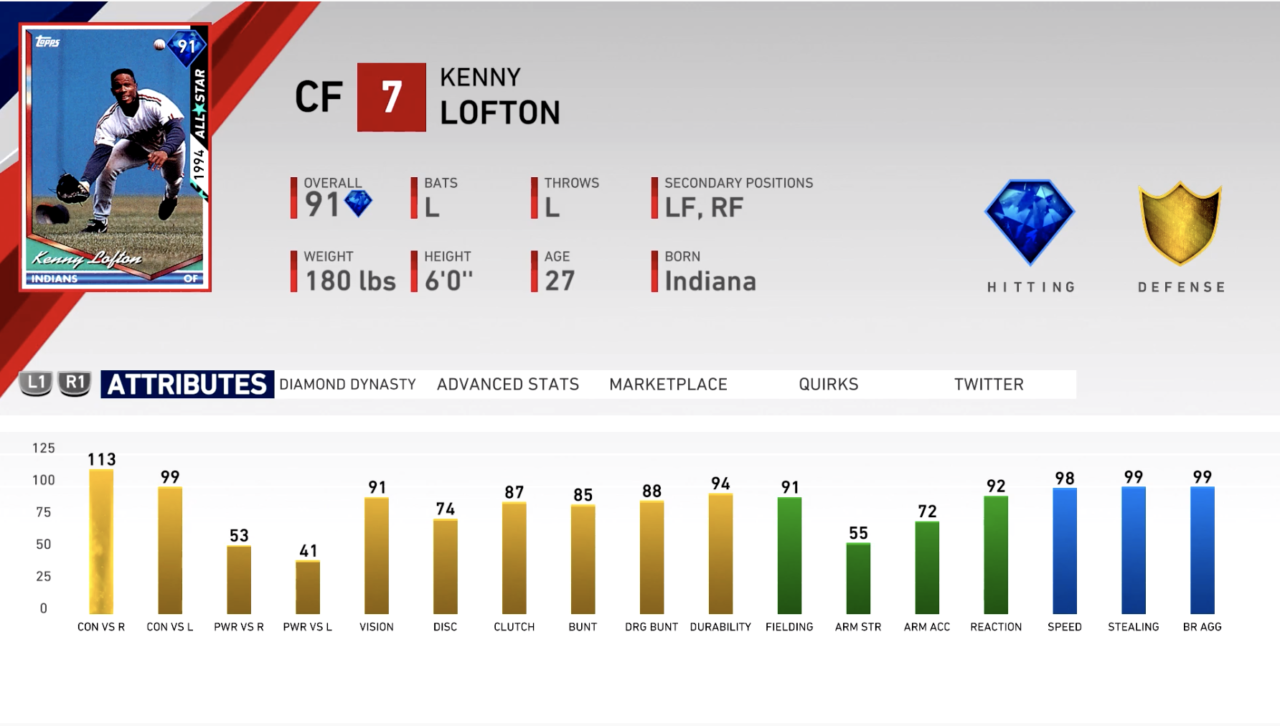 With San Diego Studio turning the page to MLB The Show 20 by announcing their new cover boy, it’s time to start reviewing MLB The Show 19 from a macro level.

But ratings aside, some cards just played way higher than their statistics would suggest. Let’s examine the top 5 “glitch” cards in MLB The Show 19. 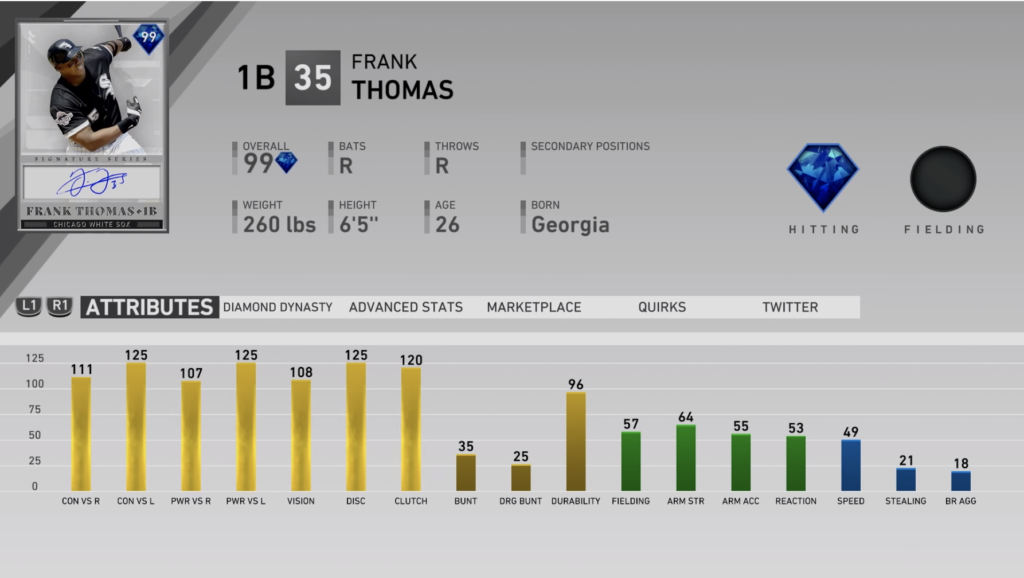 Thomas might as well have been rated 150 overall because there was no card that mashed harder than ‘The Big Hurt’ did in this year’s game. Thomas was pretty simple to acquire, too. Once a user reached XP level 100, Thomas was a free unlock in a prestige choice pack.

Blessed with 125 contact and 125 power against left-handed pitchers, he absolutely destroyed southpaws. His 111 contact and 107 power against righties were nothing to sneeze at either. If that wasn’t enough, the 108 vision he brought to the plate made striking Thomas out almost impossible.

Hitting balls over the fence in Diamond Dynasty was a struggle for most of this season, but it never seemed to be quite an issue for Thomas. He was in lineups shortly after launch, and hasn’t left lineups for this entire cycle.

Developers promised defense was going to matter more than ever in ’19, and it did for most positions. But Thomas and his common fielding never showed any warts as he was one of the more reliable fielders at first base all season.

Much like MLB The Show 18, Gallo once again represented one of the biggest glitch cards in this year’s game. His live series card possessed massive power, but his 14 vision would suggest it’d be difficult to make contact with the ball.

That wasn’t the case.

Gallo mashed. If you were able to put bat on ball, it was almost certainly going to do damage. His 102 and 103 power ratings played bigger than several other cards with substantially higher power marks.

When San Diego Studio released his overpowered All-Star Game card, many feared it would only exacerbate the issue. At 94 overall, Gallo’s midsummer classic card did just that. His boosted 120 and 124 power ratings played even bigger than the live series card. Once again, if a user were able to put wood on the ball, it was generally time to alert NASA.

Furthering his value, Gallo could be employed just about anywhere on the diamond. Capable of playing the entire outfield and any corner infield position, Gallo’s versatility has allowed him to stay in lineups all year.

Switching gears a bit, not every glitch card had the ability to drop bombs at will. Lofton without a doubt represented one of the most difficult outs in this year’s game. To make it worse, once Lofton was on base, the impending stolen base was a forgone conclusion.

Contact hitters were overwhelmingly popular around launch this season and Lofton was a catalyst for that meta. His 113 contact against righties was elite, especially considering he donned 91 vision at the plate. The swing was glitchy and incredibly easy to use. Players could be early and pull just about anything down the line. Worse, if users were late on pitches, little flip jobs into left field were almost always rewarded. Frankly, if swing timing was early or late, Lofton generally had a better chance of getting a base hit, as perfect timing could often result in a line drive missile at the center fielder.

Lofton could be acquired by completing the Cleveland Indians team collection. The only drawback of having Lofton in the lineup was his weak throwing arm, and that certainly did come into play as content continued to drop this season. 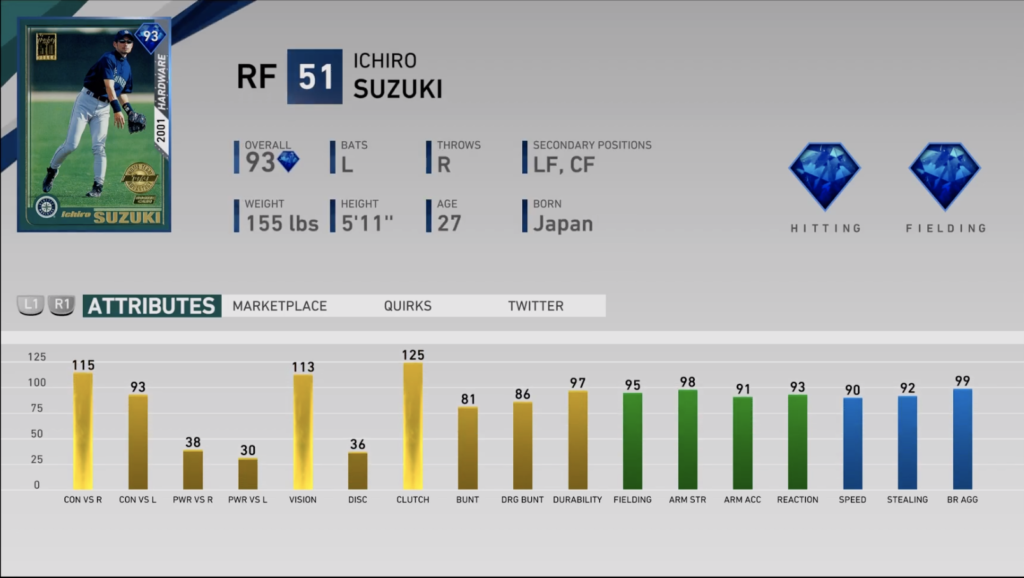 Seeing Ichiro and Lofton back-to-back on this list is probably giving some hints about what was important this year. Ichiro was an incredible headache for opposing pitchers this season. Lofton came with marginally more power, but Ichiro’s throwing arm made him a favorite for Diamond Dynasty teams for a huge chunk of 2019.

Like Lofton, Ichiro had an incredibly forgiving swing. His base hits would constantly bloop in behind the shortstop if they were not roasted into the gap for a stand-up triple instead. Ichiro was another easy acquisition as he could be secured for free from a hoice pack upon reaching level 75.

Bellinger wasn’t always such a powerhouse in this year’s game. In fact, his overall climbed nine points during his meteoric campaign. He began 2019 as an 84 overall gold card. Regardless of where his ranking was, Bellinger mashed the hell out of the virtual baseball all season.

Right out of launch, Bellinger was a mainstay on Diamond Dynasty teams. His power numbers against right-handed pitching made for a true middle-of-the-lineup bat for most of the spring. His ability to play the outfield or first base allowed for lineup flexibility as well.

Seven months later, Bellinger’s live series card sits at 96 power versus righties and 95 power versus lefties. His exceptional defensive statistics make him playable to this day even when compared to supremely rated Signature Series cards.

Like every year, some cards just seem to play bigger than some of their competition. Gallo was a fan favorite over the likes of guys like 99 overall Duke Snider. Ichiro and Lofton were left in lineups, even though there were actually 58 outfielder cards rated higher. Bellinger, though less extreme of an example, kept his place in lineups for a large chunk of 2019 strictly out of feel.

With MLB The Show 20 now in its marketing cycle, it will be interesting to see what changes come in Diamond Dynasty for 2020. Specifically, will next year finally be the year Gallo feels mortal?