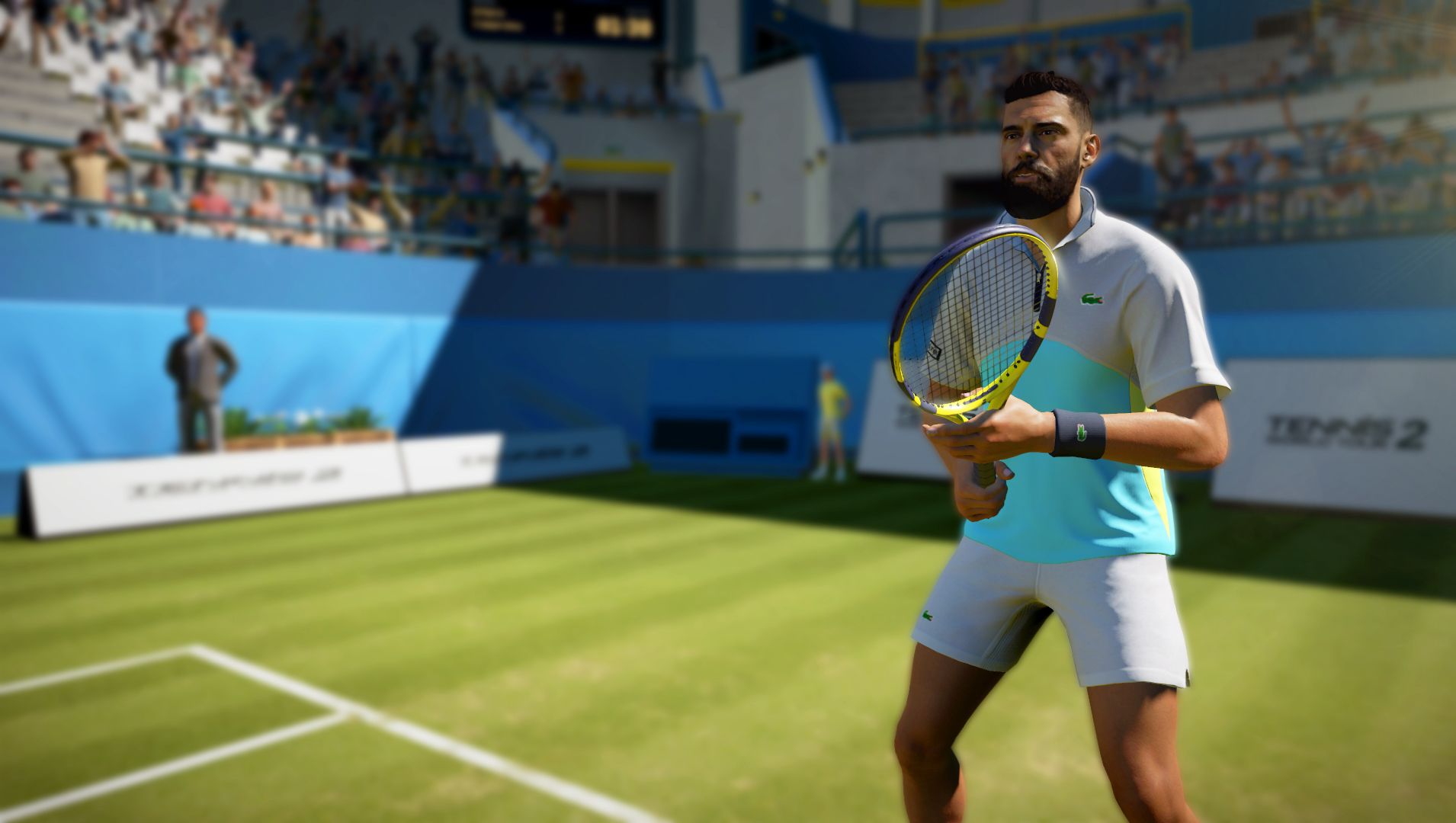 Tennis World Tour 2 is in an interesting spot right now. In a way, it’s that mysterious player you see from afar on the tennis court. It looks great with sweatbands and fresh new athletic gear. It moves gracefully around the court, and it just looks like an athlete. As you get closer, you see it wind up with great form and rip a shot with high velocity — only that shot is nowhere close to being in. You appreciate the guts of what’s here, but this is still clearly a work in progress.

The original game was released in a barely-finished state back in 2018 and, despite some patches to try and save it from its messy origins, it remained barely playable online and was a disappointment for a community desperate for someone to make the next great tennis video game.

Now, over two years later, we will get a sequel to that title in September on PS4, Xbox One and PC, and then a month later on Nintendo Switch. The first thing worth mentioning is that it’s been made by Big Ant Studios, the very same developer that worked on what has to be considered Tennis World Tour 2‘s biggest direct competition, AO Tennis 2.

So how does Tennis World Tour 2 differentiate itself while having that same company working on it? I recently had the chance to attend a brief virtual event with Clement Nicolin from publisher Nacon (formerly BigBen Interactive SA) and spend some time with a PC preview build of the game. Here are some of my thoughts on where the game shows potential and where it could really use some improvement.

Tennis World Tour 2 does have an in-game tutorial, it just wasn’t made available for people like myself to use in this preview build. This made it harder to evaluate the game at times because a lot of time was spent trying to figure out how certain things worked through trial and error.

Suffice to say, I found the game to be difficult and frustrating a times. After getting beat soundly on normal difficulty several times without my opponent so much as breaking a sweat, I decided to turn the difficulty setting all the way down to very easy — the lowest setting — and still found my opponent regularly crushing winners that I had no way to reach. This is the part where I say that I’m by no means the greatest gamer in the world or anything, and consider myself to be in fact almost perfectly average, but I do recall having no problems beating the CPU in Tennis World Tour on the default difficulty.

But even on the lowest difficulty, where you’d expect the new timing mechanic would be at its most forgiving and that the majority of shots would result in either “Good” or “Perfect” feedback no matter what, hitting accurate shots did not feel all that much easier. The same goes for your opponent, who you’d think would be more likely to make unforced errors or have trouble getting to balls on such a low difficulty, but instead they were still able to unleash almost as many of those brilliant returns down the line as they are on harder difficulties.

In fact, at one point I cobbled enough points together to finally win a game and thought I might be ready to try a slightly harder difficulty — only to realize that I was already at normal difficulty unbeknownst to me. So there’s clearly not enough of a delineation between these current difficulties to even so much as tell them apart.

That being said, obviously if the tutorials and such had been accessible this most likely would have been smoothed out, so the end consumer should not have as many growing pains as I did. At the same time, it does seem like some folks will have to train themselves up, which may actually excite some of them. 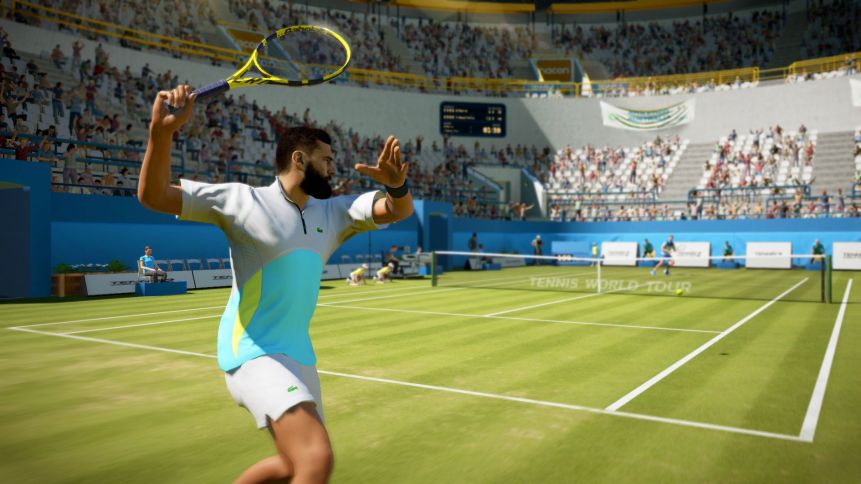 Switching over to a more timing-based mechanism for your ground strokes — with Top Spin 4 (the crown jewel of last generation’s tennis simulations) mentioned by Clement Nicolin as a point of reference for Tennis World Tour 2—the expectation would be that there would be more skill and consistency required to keep your opponent on their heels. However, this system definitely needs some more refinement if it’s going to result in healthy competition and long-term fun.

There seems to be far too much variance and randomness in the results of your shots, and the feedback that’s provided doesn’t really do much to let you know exactly what you’ve done wrong. The feedback employs a scale that runs from “Too Soon” to “Good” to “Perfect” to “Too Late,” which are all easy enough to understand as words but they don’t tell you whether you’ve pushed the button to swing your racket too soon or too late, or whether it’s the release of your shot that’s too soon or too late.

I spent a lot of time trying out different things to see how to get the best results from this feedback, and what I eventually settled on was that there really doesn’t seem to be that much rhyme or reason to any of it. I tried pushing the button very early and would sometimes get “Perfect” feedback, and I tried pushing the button very late and would sometimes get “Perfect” feedback. This was also true of “Too Soon” and “Too Late” feedback. Even after finishing quite a few games, I was just never able to figure out exactly what I was supposed to do to get optimal results on a regular basis.

This lack of consistency or logic also extended to the direction of shots as well, where I could never seem to get the ball to go where I wanted on my opponent’s side of the court. It obviously makes some sense to not be able to control where your ball is headed as much when you’re on the run and scrambling to even get to the ball and put it back over the net, but there doesn’t appear to be enough of a difference between aiming your shot from a full sprint and standing still. I was sometimes able to get a pinpoint cross-court shot while sprinting in the opposite direction, but then also struggled many times to put a point away while I was standing still and had an entire side of the court open — opting instead to annoyingly hit the ball back in the middle so my opponent could easily play it back.

The new service mechanic fares a little better, though it does take a little bit of time to figure out. You decide on the angle of your toss and the direction of your serve in the first part before applying power in the second. If you don’t hit the correct angle on your toss, it will make it more difficult to hit the ball accurately when you add power. Again, at least this is how I think the whole thing works. All I truly know is that it did produce more dynamic results with your serve (I even got a few lets), though it does also seem to have a bit of randomness baked in as well. Even when I was able to execute everything perfectly to the best of my knowledge and hit some nice serves on the lines with maximum power, I was still never able to ace my opponent. 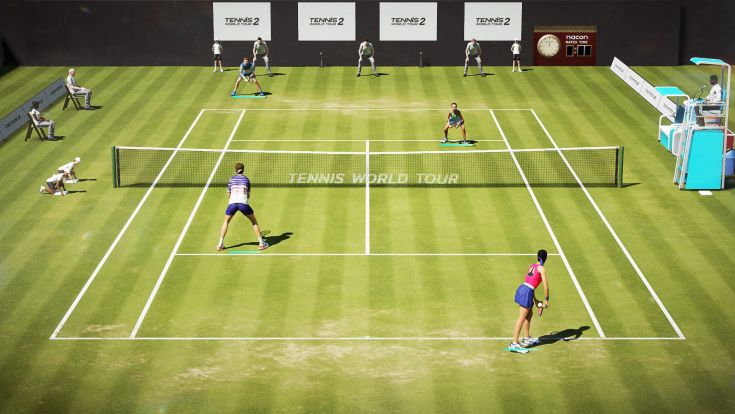 The game has clearly improved quite a bit in the visuals department, both in how the players move and react on the court, and in the way a match is presented.

Claiming to have doubled the number of animations in the game, players do feel more fluid in their movements and transitions for the most part thanks to a new in-house game engine. There are still instances where the game feels like it’s on rails a little bit, especially when your player gallops across the court to lunge for a ball in spite of minimal input on your part, but this is perhaps a direct reaction to how the original’s gameplay was almost “too realistic” according to Nicolin in how hard it was for players to change directions. At the very least, animations should now at least match the types of shots, which Nicolin admitted was an issue in the last game.

The presentation has taken a step forward as well, with a nice selection of close-ups that highlight how much the players resemble their real-life counterparts (though we only had access to four pros from the roster). While getting dominated by Garbine Muguruza over and over again, I became increasingly enraged by the shots of her grinning after I hit the ball way out for the umpteenth time and that’s a testament to how lifelike she felt across the court from me.

The ability to challenge calls is a welcomed addition, with the exciting flyover overhead camera showing you whether a shot managed to catch the line or not. I saw a nice mix of in and out calls from the CPU’s challenges in the matches I played, so it’s clear they aren’t correct every time they issue a challenge.

The sounds of the ball and the crowd are serviceable if not spectacular, and the intonations of the chair umpire’s announcements of the score add some immersion. The opportunity to pull a McEnroe and engage in some spirited arguments with the umpire would have been nice considering how terribly things were going for me on the court, but that’s probably too much to expect from a game.

Though we didn’t get access to the MyPlayer creator or the game’s career mode, we were told that the creation suite has been expanded to even include details like serve routine, which is great news considering the original game was so limited in this area that your player couldn’t help but end up looking the same as others. Once you’ve decided on what you want your player’s appearance to be, you’ll then be able to use them both in career mode and in online play.

As you play and earn in-game currency, you can purchase packs of cards that can be used to either boost your player’s skills or lower your opponent’s abilities during a match. Though Nicolin claimed that this was meant to replicate times in a real match when a player is “feeling better,” it’s hard not to come away thinking that’s a pretty flimsy justification for including a rather arcade element. Nevertheless, there’s at least some strategy to the whole system. Separated into four categories (endurance, speed, precision and agility), selecting when to use these boosts, and which boosts to even include in your hand before any given match, allows you to help play to your strengths or perhaps expose an opponent’s weaknesses.

These cards not only provide boosts for certain attributes, but they also come with a duration and a set number of times that the card can be played. This creates further strategy where you’re forced to decide whether you’d rather have a card in your hand that will provide a slight boost for a full match, or a card that will give you a more substantial boost for just a point but you can play it maybe 10 times during a match.