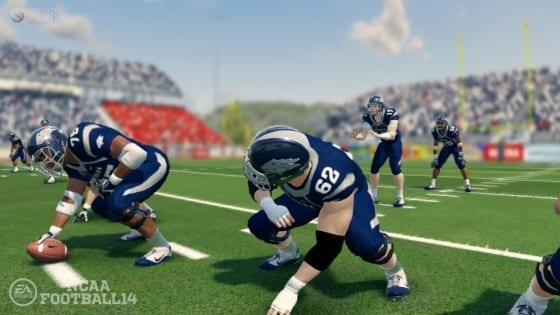 The future of college sports video games is murky at best after the Supreme Court refused to hear the Ed O’Bannon case.

At this point, that means the O’Bannon case as currently decided is how things are. At this time the ruling stands as follows (Per the USA Today article linked above):

While antitrust law requires that schools be allowed to provide these athletes with scholarships that cover all of their costs of attending college, including travel and personal incidentals, “it does not require more,” such as what it termed “cash sums untethered to educational expenses.”

Just over a month after Peter Moore declared that ‘we’ll be back’ when it comes to NCAA Football, the future of college sports video games seems murky and uncertain.

For college video games to return will require a couple of things.

Several schools began to pull out of EA’s next gen college football title at the end, and that was one of several items which led EA to scrap the title. In an era of video games where people obsess over the authenticity of shoes and haircuts, having generic teams (and players) seems like a hard thing to sell.

What would lead to a game being possible is likely a resolution from the NCAA and member schools allowing players to get money for licensing their image — which it seems there isn’t much movement on at this time. While its a good thought to think that people would buy a game with generic teams and players with customization — those types of games have never sold enough in the marketplace to justify high development costs required of AAA sports titles in 2016.

In short, without a way to license players officially (along with schools) its doubtful we see college sports games return to consoles.

NCAA Football 18: A Game So Good, We Truly Wished We Could Play It All Day