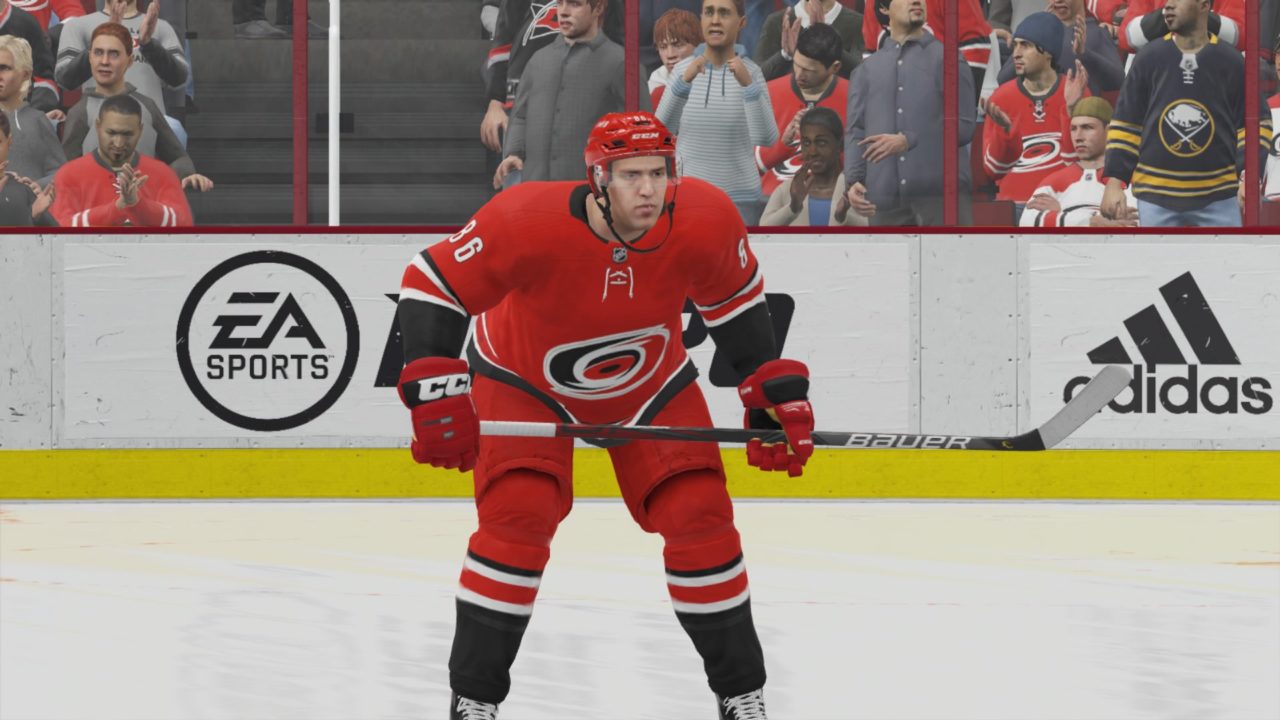 With another year of EASHL well underway in NHL 20, let’s talk about the meta. With each iteration providing marginal differences in the meta, I’ll give you my opinion on what works and what doesn’t for NHL 20‘s EASHL gameplay at this point.

The pace of play in EASHL is frantic, to say the least. Players are forced into making quicker decisions on and off the puck. Twitch skill and play recognition skill gaps are magnified due to the pace. Reading the play and your opponents correctly are equally as important as your technical skills on the sticks.

For years, pass interceptions have been wildly inconsistent. Part of this was (and still is) user error, but this year the pass interceptions can easily be considered overpowered. We’ll go into the “OP” side of things later, but the pass interceptions this year can finally be relied upon. Facing the opposing passer while gliding with a good gap will almost always result in an interception as long as it’s a standard RT/R2 pass. Problem areas around the crease, specifically when gliding forward towards the net in an attempt to cut-off the centering pass from behind the net, have been noticeably improved. No longer can teams truly rely on forcing passes through multiple opponents as their main source of offense. 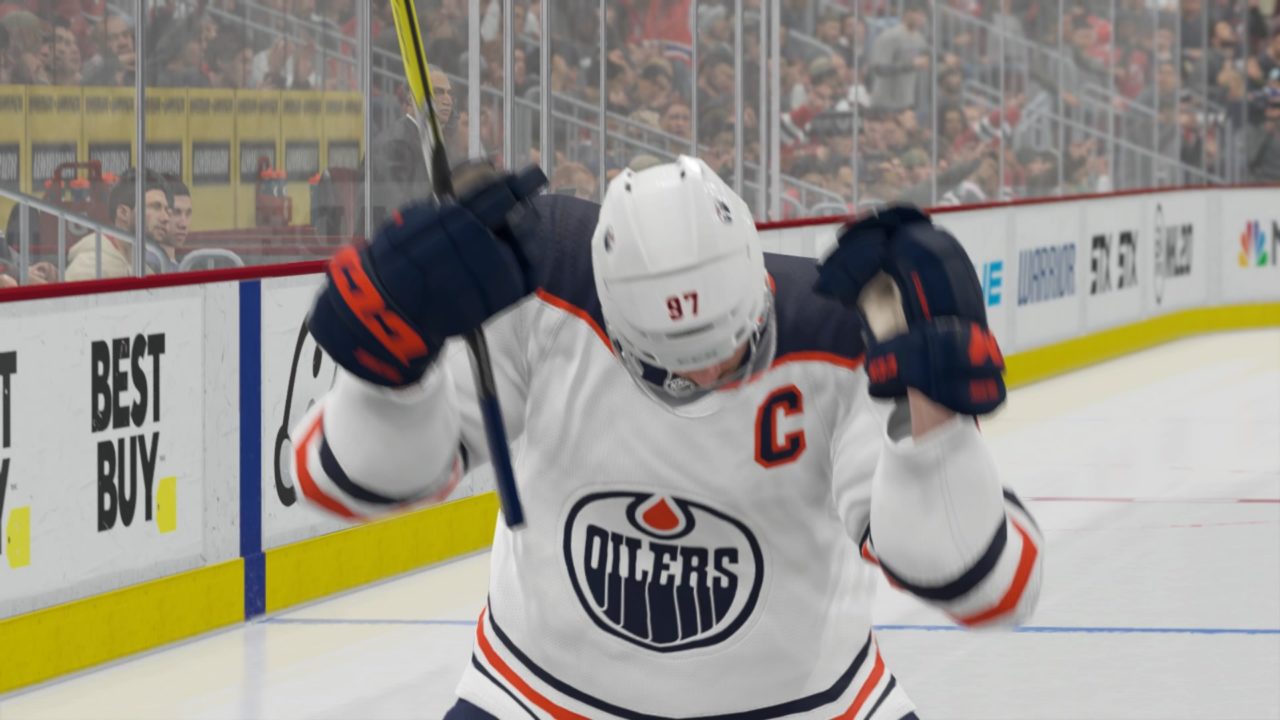 If you’re experiencing trouble scoring, please go equip a sniper class and get back to me after a few games. This class can flat-out shoot, and I’ve seen some absolute top-shelf snipes from above the tops of the circle. For years, I’ve been saying that screens and classes designed to shoot (OFD/Snipers/PWF) need to be considered a threat to shoot on rushes, and it looks like I finally got my wish. This will hopefully result in defensemen playing tighter gaps on rushes that should lead to more room in the offensive zone. It should also naturally make human goalies play out higher to cut down angles. This should lead to either more snipped corners if they refuse to come out of the net, or lead to more goals as a result of lateral passing. Sorry goalies, but this is a great thing for the series. Sitting in the middle of the blue and slightly moving your left stick to make saves is horrible for the meta. 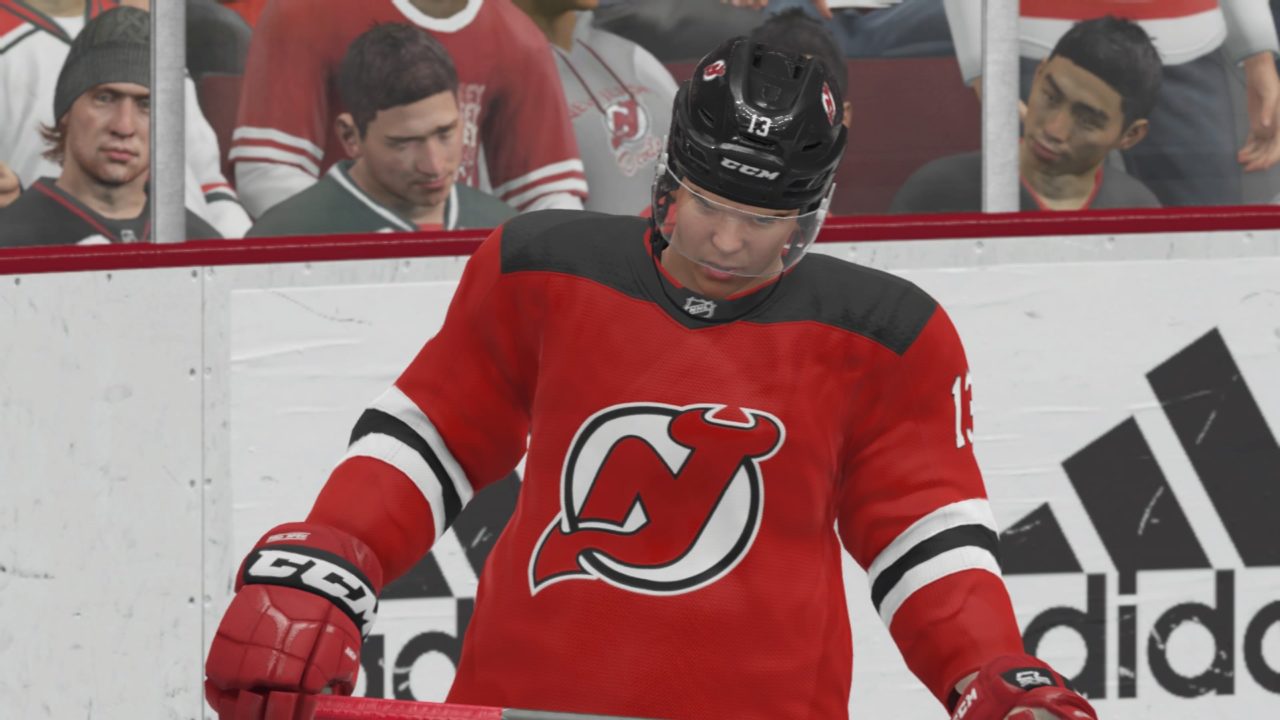 Yes, pass interceptions belong in both categories due to the absolute absurdity that is the consistency of pass interceptions in this game. As a defenseman, I love that I can rely on these when I’m playing a proper gap and facing the puck. I also hate how good these interceptions are, as making breakout passes is one of the hardest things to do now in the game. When elite teams pressure you hard, full-sprint forwards can now intercept fully loaded passes without missing a beat. Clearly, there are some unintended side effects of drastically cranking up the interceptions this year, and to promote a team game where passing is king, these need to be lowered to a middle ground between ’19 and OOTB ’20.

I’ve brought this up numerous times on the official forums, Reddit, Twitter and so on, but the fact of the matter is that stick play is too dangerous to use it consistently in this game. Hockey at the highest level is so much about body positioning and stick work, and the NHL series has still yet to find the right balance when it comes to the risk/reward with tripping. The defensive skill stick (DSS) introduced in NHL 18 was the first step towards truly replicating the stick work we see in the NHL. We can manually aim our pokes and sweep our sticks in the direction we wish. Unfortunately, “spamming” plagued NHL 18 due to the lack of risk when using the tool. This led to NHL 19’s DSS risk/reward meter being skewed too far into the risk category, and NHL 20 hasn’t been able to find a spot in the middle.

Many scenarios, including a rush where your stick would be attacking the front of the attacker or a 50/50 puck battle where both players in real life would attack each other’s respective stick, lead to way too many stick infraction penalties in the series. Instances of tripping when the puck carrier is gliding also need to be either removed — or drastically decreased at a minimum — because it makes little sense for someone to trip while they aren’t moving their legs. Especially when poke checks aren’t guaranteed to cause a loss of possession, it’s not fair that defenders can’t even apply half the stick pressure as their real-life counterparts do in these scenarios.

Simply put, stick work in real hockey isn’t something you only do when the perfect conditions are met. Stick work is a given at any point on the ice, and it needs to be the most active defensive tool we have. With the increase in shot accuracy, stick-play balance is more important than ever before. 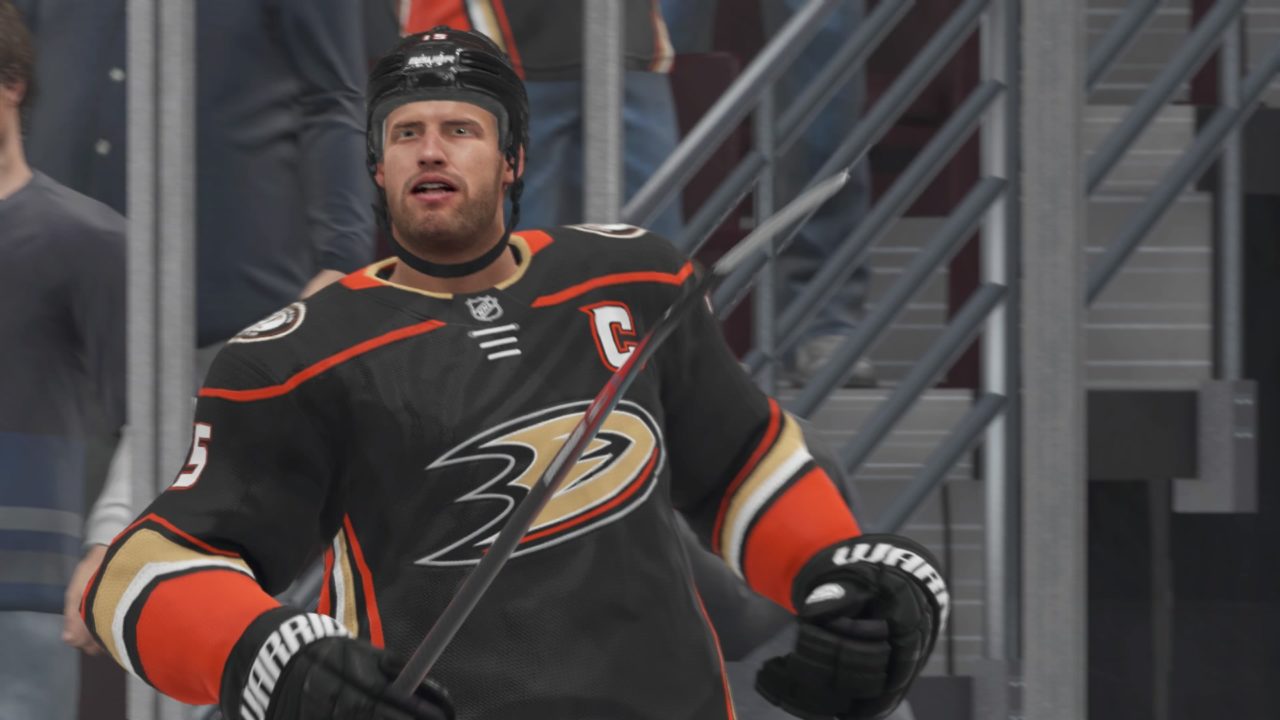 “The bubble is back!” That is the first thing I heard after retail NHL 19 was released coming off the ’19 beta. Unfortunately for the devoted online players, NHL 20 once again misses the mark when it comes to physical play. NHL 19 was definitely manageable as far as low-impact hitting went. I saw more loose-puck results when a puck carrier was receiving a check while curling the puck behind their back and turning away. It seems as if low-impact hitting has been made marginally worse in similar scenarios in NHL 20. Combined with the high-risk use of DSS, EASHL defensemen seem more like human pylons than ever before. Also, low-impact hits from straight-on scenarios like a player trying to deke to the middle have been nerfed. This has resulted in more basketball-type “isolation” plays that plagued the NHL 07-12 era of games.

The left-trigger meta is back, and even though it’s not better than ever, it’s certainly still rearing its ugly head on this series. Look, I’m a big fan of the move in theory. It reminds me of the “spread eagle” skating maneuver we see NHL players constantly use to protect the puck. However, if you’re going to nerf hitting and stick play, you can’t let forwards constantly spin, pivot and draw penalties. There’s no reason that this maneuver should be REQUIRED to compete. It is a skill that should be used in the right scenario, but it should not be used on 95 percent of zone entries. Fortunately for the community, the developers are aware of this meta and are constantly brainstorming how to decrease its effectiveness while limiting the negative side effects it would have on other aspects of the game. 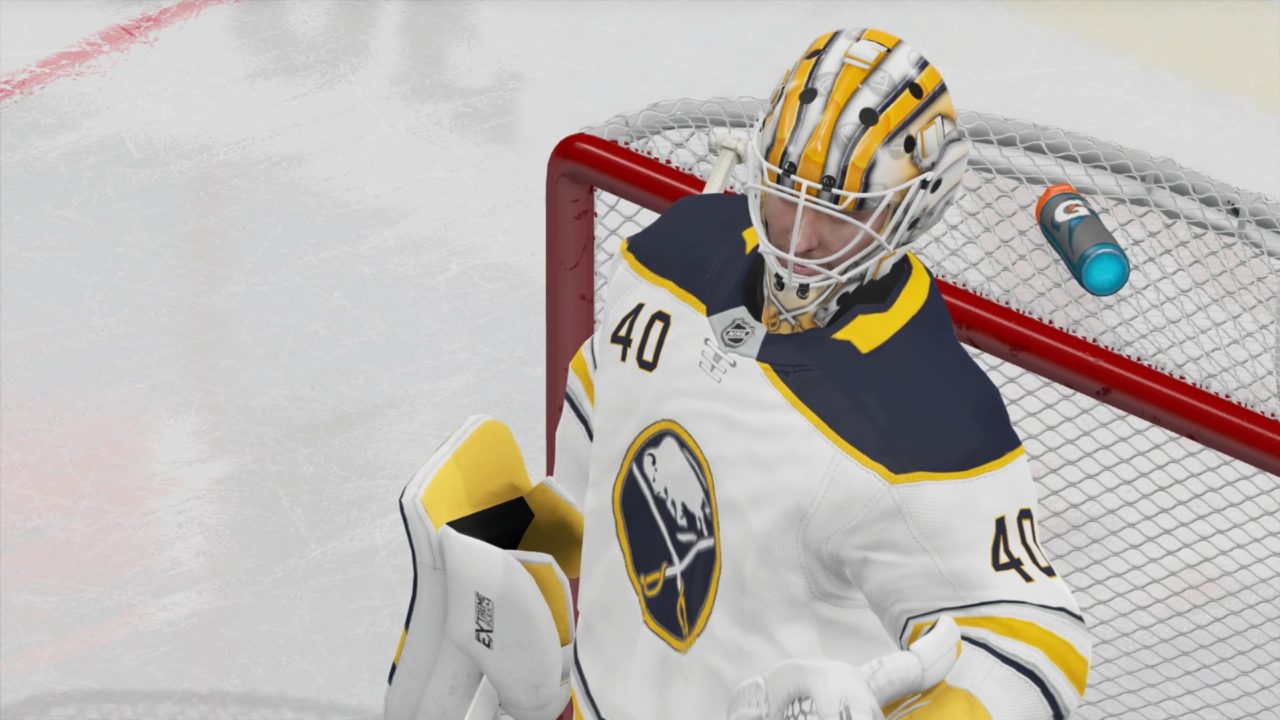 Somebody please save these poor human goalies! Man, this crowd has suffered through this whole generation, and NHL 20 did not help relieve the pain at all. First, why can goalies not move? The little shuffles they make really hinder a human goalie’s ability to effectively move around the crease. In turn, they’ve been given crazy limb-save movement for most of this generation to help mitigate their slowness. Many human goalies find themselves sitting middle-blue in the crease with the occasional LS movement to make a save. If it sounds boring reading that, trust me, you’re not wrong. Sadly in NHL 20, It’s a catch-22 right now for human goalies. If they sluggishly move out to the top of the crease, one short lateral pass will certainly lead to a goal against. Failing to challenge the shot will more than likely result in getting beat from outside the tops of the circles. Now, I don’t mind the risk/reward in theory, but you can’t have goalies getting beat on first shots from the blue line when they aren’t allowed to move! We desperately need a revamped human goalie position. Goaltending is currently not an active nor rewarding position to play in EASHL.

What do you all think of the meta this year? Let me know in the comments!