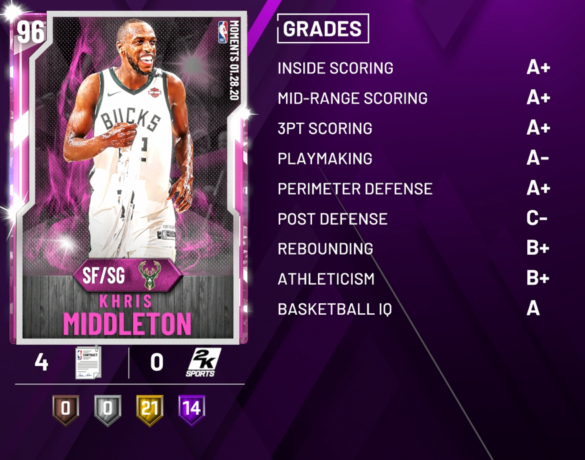 Khris Middleton scored 50 points, so you know what that means in 2K’s universe: you get a pink diamond — them’s the rules. Pink diamond Khris Middleton joins the group of other Moments cards, so we’re now up to seven for this week.

Quick Analysis: I would classify this as just about the ultimate form of a deceptive card. He’s new so he’s overpriced right now, but that’s standard. However, I think he’s probably closer to a low-end diamond or amethyst, but you wouldn’t think that if you give him a cursory glance. For example, he has HOF Clamps, gold Intimidator, HOF Quick First Step and HOF Quick Draw. So it’s like, “wow this looks like a really good card, or at least much better than some of those other fake pink diamonds we got this week.”

But not so fast. He has 43 steal to go with HOF Clamps. he has 67 interior defense to go with gold Intimidator. He has 84 speed with ball and 55 driving dunk to go with HOF Quick First Step. It’s almost like the 2K team is using Middleton as an experiment to really show off how much attributes vs. badges really matter.

Now, his shot release is very good. He’s also 6-foot-8, which is a great height for a shooting guard. The release was probably a concern for some because it’s been another one of those hit-or-miss releases in past 2K games. I have been the Bucks in MLO before, so I know the ups and downs of using Middleton. Two years ago he was okay but you had to get used to him. Last year, he was essentially bad and it made his diamond Moments card a disappointment.

This time around, his release is back to being really good. The release point makes sense, and he gets it off in a hurry. He’s going to knockdown shot after shot if you leave him open. However, he can’t finish and he’s going to get bullied still at times even with his height. He’s a good perimeter defender, but HOF Clamps is more like a necessity than a selling point with these sorts of wings now.

All in all, sell high on this one if you get him. He’s not a bad card, but he’s not worth his selling price, and he’s not really worthy of pink diamond gem status in comparison to some of the other wings out there.