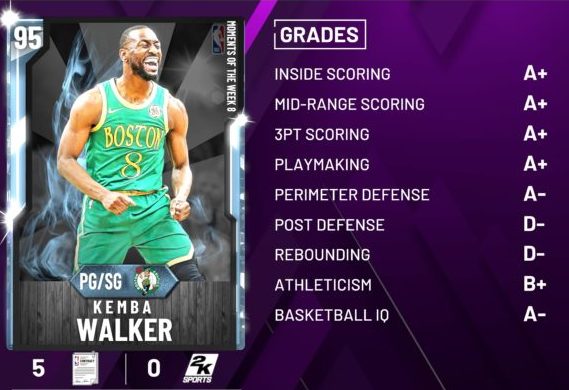 Moments of the Week 8 is not the most enticing week for those looking for sick deals or new surprising players, but there are still some quality options here who will be worth checking out in the various tiers of cost. With that in mind, let’s get to the reviews. Starting things off, we’ll talk about the diamonds in this portion of the review. In the next set, we’ll get to everyone else. 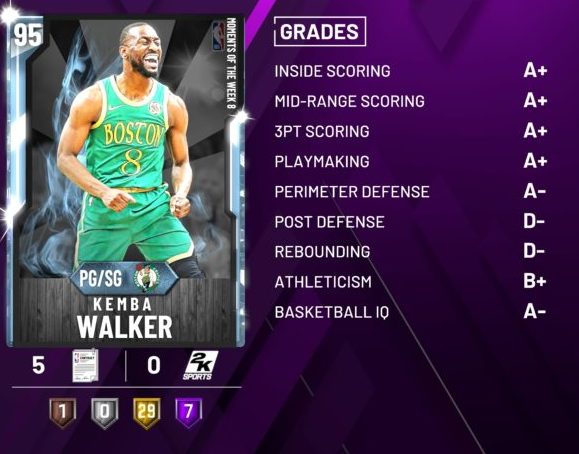 My outlook on Kemba Walker is that he’s a very easy player to use with a really smooth jumper and dribbling animations. However, he’s not the player I use when I want to win in NBA 2K. The lack of defensive badges, mixed with his height and below the rim athleticism, means I don’t take him too seriously as an option on my teams. I love using him in the practice gym, and he’s a perfectly good option for offline challenges, but at best he gets to play on my Triple Threat online squads.

Nevertheless, yes he is easy to get greens with in my experience. 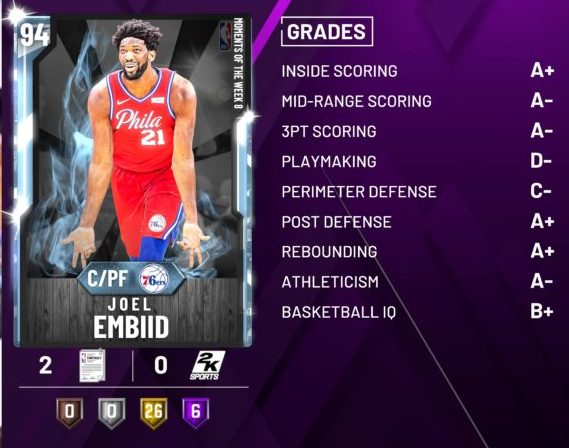 Embiid is a center I always try to use in 2K, but I’m never satisfied. That starts with his jump shot because I just can never get the timing quite right. With 100 percent certainty, I still feel that way when scoping out this card, but I do think this is a good diamond card. He’s the most well rounded player when looking at the three diamond centers this week, and his post game, shooting, defense and passing are all going to be worthwhile.

That being said, I just can’t shoot well enough with the dude. He beats up people in the post and is very good at protecting the paint, but this version did not make me change my mind in terms of having faith in using him as a starter. However, he does get a PF alternate position here, so you can really go with a massive lineup if you want, which some people will do. I do not like playing that way so he stays at center for my teams, but optionality with lineups is never a bad thing.

The additional HOF badges are important in some respects here when looking at this JJJ card and his amethyst Moments card from last week. However, as you will see me say time and time again in this review for players who are getting their second Moments card, I don’t think you need to upgrade yet.

He’s a great center, probably still my favorite one to use this year, but he’s going to be plenty good enough still in the amethyst form. Once he gets a more mobile card, then perhaps he will be worth picking up, but in the interim he still can take most bigs off the bounce, and hit plenty of long jumpers in pick and pop. He retains gold Clamps as well in either form, so he’s a very usable switch defender if that’s more the style of defense you’re rocking. 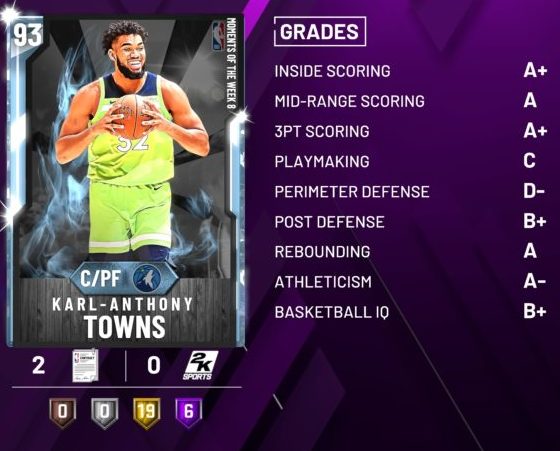 KAT is a monster in 2K games, so I do think there’s a valid reason to always look at his cards, and here you’re getting a card that is one of the best offensive centers in the game. He’s perfect for 2K right now because his shot is smooth, he gets gold Range extender, and he’s fast and big enough to do whatever else he wants on offense. His post-up game is very good, he’s fast off the dribble, and did I mention he has gold Range Extender? Oh, I did, well I’ll keep mentioning it because it helps make him such a weapon on offense.

The other not-so-secret thing about NBA 2K20 is that all you need is height on defense for the most part. He gets bullied a bit in the post, but overall his 7-foot frame helps minimize the fact that his defensive attributes (and lack of badges there) are horrendous for a diamond. The other element that’s nice here, much like with Embiid, is he does get PF eligibility. KAT is more mobile than Embiid, so that means it’s even easier to slide him to PF and take advantage of his skills. Regardless, I still like him more at center because he’s such a chore to defend on the perimeter.