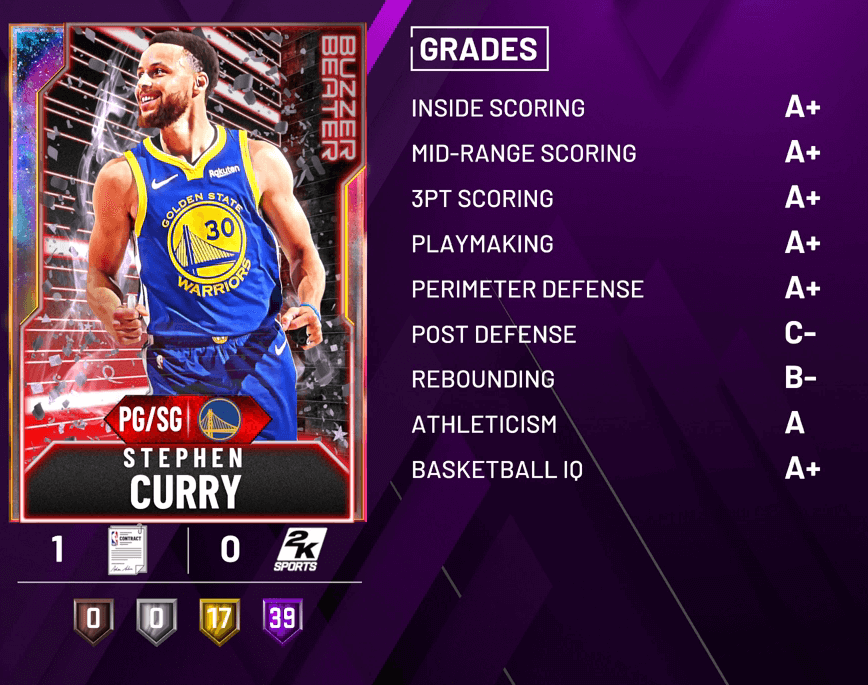 With the Buzzer Beater cards, we’re getting confirmation that chaos will continue to reign in NBA 2K20 MyTeam. A couple of the players are situational in some senses, but all four have insane stats and are generally good to great. Let’s start with reviews for galaxy opal Steph Curry and pink diamond Chris Webber.

Analysis: Well, galaxy opal Steph Curry gets 39 HOF badges so let’s start there. He has HOF Clamps and every other badge you want on a point guard. By the numbers, he’s about as good as it gets at the position. However, he’s incredibly overpriced right now, and I don’t think he’s the best PG in the game either. I still think Westbrook, LeBron and I would say even a couple beyond that can still beat out Steph. He has 75 strength and does not get pushed around at will, but he’s still going to be taken advantage of by giants at the position.

Beyond that, I don’t think his shot is one of the best in the game, and his leaning shot is really only great going to his left in terms of timing and flow. I’m not saying his shot is bad, or that he’s hard to green with or anything like that, but he’s not undisputed. He still has flaws, and I think the price being paid for him is too high. People who want him won’t be disappointed with him, but he’s not the most competitive option right now.

All that being said, his strength and dunking are more than you might expect, and beyond the obvious matchup issues due to his height, he’s going to do a lot of fun stuff out there. I had a blast using him in TTO, but I can’t justify keeping him around at a price that could fund multiple teams without him. 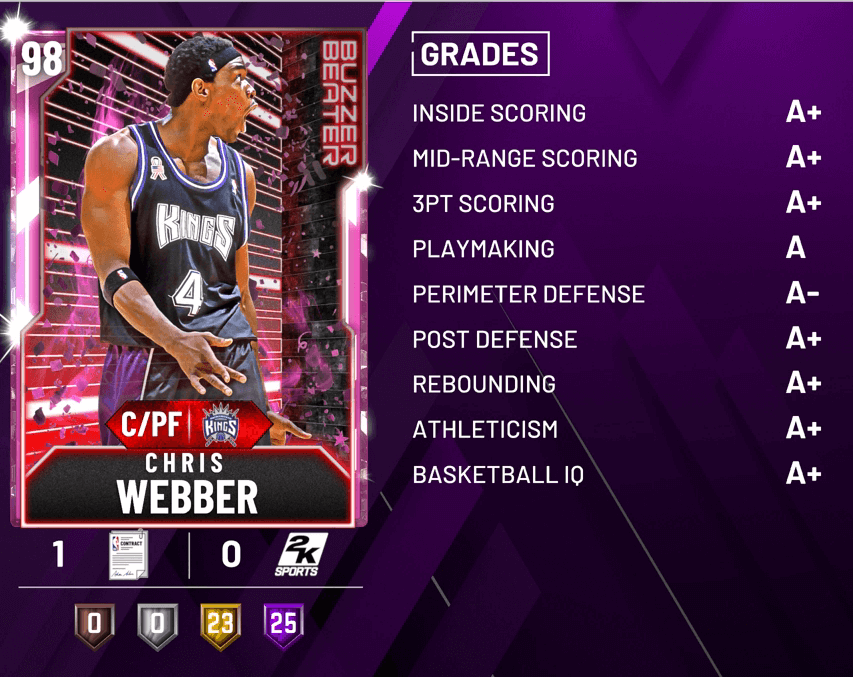 Analysis: Webber gets 25 HOF badges, and if you’ve played with great Webber cards before, you should feel right at home. He’s not a center, he seems small, and so he’s basically your counter to Bam — or your new Bam. He does not have Range Extender because then he would be a whole other level of dangerous, but I don’t think he “needs” it to be good. I don’t think he would be my top-end pick even if he had that badge because I don’t love his post game or height.

He’s a great playmaker from the center position, and if you do go against smaller teams, those positives will really shine at center. As a PF, he’s not amazing off the bounce, and his shots out of the post don’t feel great to me so he does get stuck in a bit of dicey spot at times at PF — considering some of the other more agile options there. His shot from the perimeter also feels much better than the shot out of the post.

So if you use him as a playmaking center, stretch center, or as a grab-and-go center, he’s a great option. If you are looking for a starting PF or C in every game, I would not use Webber as that player. He’s really for TTO or as a platoon option against smaller lineups. Now, if you’re going full-on small ball no matter what, then Webber is a great pick.