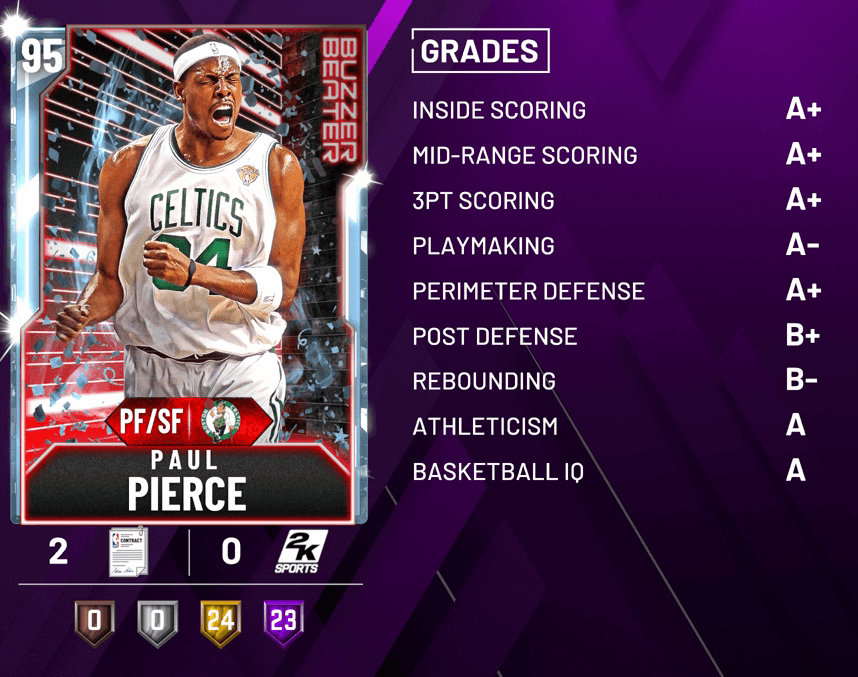 With the Buzzer Beater cards, we’re getting confirmation that chaos will continue to reign in NBA 2K20 MyTeam. A couple of the players are situational in some senses, but all four have insane stats and are generally good to great. With that in mind, here are the reviews for pink diamond Drazen Petrovic and diamond Paul Pierce. 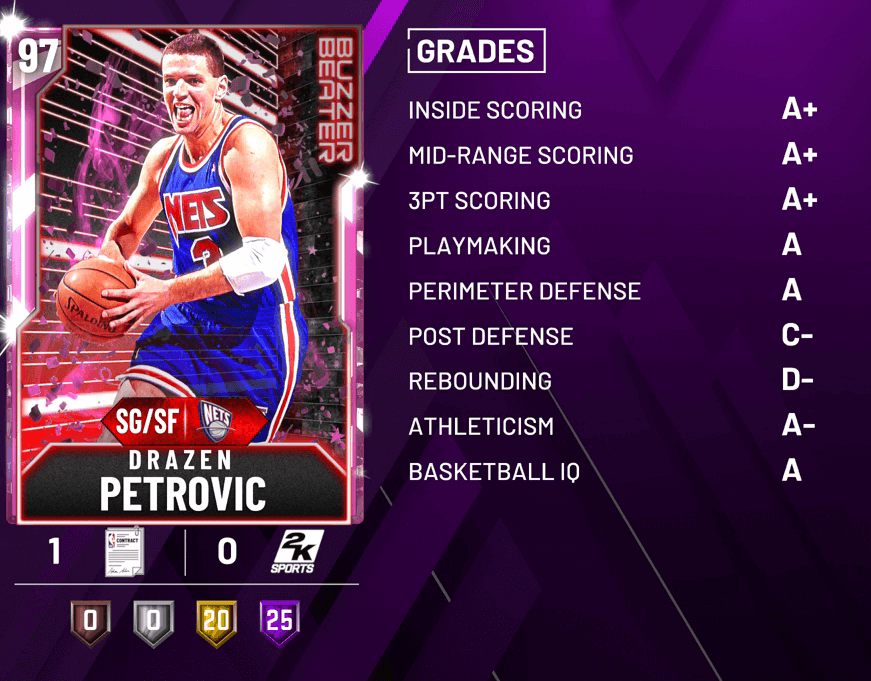 Analysis: Drazen Petrovic is a bit of a legend in MyTeam due to some of his former cards, but I don’t think this one quite reaches legendary status. That being said, he has 25 HOF badges and is absolutely dangerous from outside the paint. I think he’s every bit the shooter Steph is from the wing spot, but I don’t think he stands out above the pack at SG in terms of being new or unique. Guys like Buddy Hield are in this lane as well, so it may come down to who you like shooting with more. Personally, I love Drazen’s shot, but I still think Buddy has a better one.

He’s not a slouch on defense or anything, but his speed isn’t ridiculous, and he’s not huge for the wing position or anything like that. His leaning shots feel good, but you’re not getting a crazy explosive wing to keep defenses that honest. He will still dunk on a drive, but his hop step is slow — since I know a majority of people exploit and overuse that move you should be aware of that — and he will struggle to finish in the lane.

If you’re just looking for a heater who can still dribble into his shots while playing adequate defense, then Petrovic will work just fine for you. If you’re looking for a pure shooter and nothing more, then look for cheaper options.

Analysis: Pierce might be a diamond, but he has 23 HOF badges and is still a pink diamond or better by any normal measure. That being said, he’s still a bit of an “art house” pick like McCollum and Coby White in that he’s not normal for what you may want from a wing. He’s not crazy off the bounce, and you will struggle to break some people down with him. However, he’s great out of the post and in a more controlled half-court game. He’s also great in TTO where there are more options to bully and change tempo if you want.

Pierce’s shot is not my favorite, but it’s certainly usable. That being said, be aware he did get Steady Shooter. I thought this badge was just about extinct, but maybe 2K realized this Pierce card was so good they had to “nerf” it a bit somehow. He’s really good on defense as well. I was able to hold my own with him at PF, and he’s mobile enough to deal with most wings as well. He can body people up and so he’s good both on the perimeter and inside.

So if you enjoy post play or just like doing something other than pressing turbo, Pierce might be a really fun option for you. He’s also only a diamond so his price is not bad at all. You can use him on a budget squad, and I’m confident you can use him on even the best teams. There’s tons of competition at that 3-4 spot, but Pierce can be a great change of pace even on those teams.