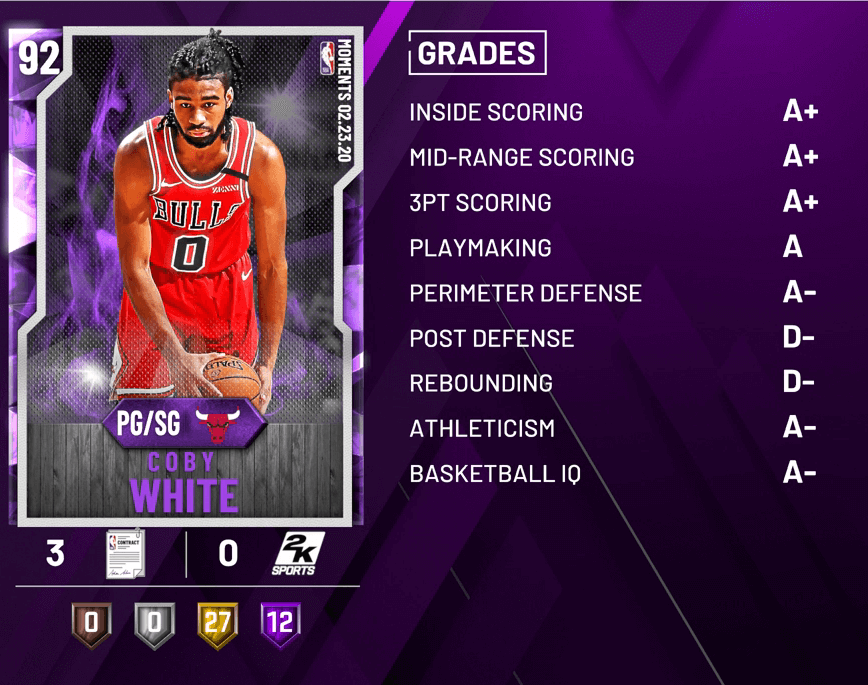 I went over Jayson Tatum and Bradley Beal in an earlier article, so next up with the Moments reviews are pink diamond C.J. McCollum and amethyst Coby White. These are sort of the “art house” picks of MyTeam to me. They’re not for everyone, and you won’t want to pick them over mainstream guys like Russell Westbrook, but they’re high-ceiling players with interesting games. They don’t just have to be used by holding turbo and speeding into the paint or doing snatchback dribbles into pull-up jumpers. There’s some nuance to these cards so let’s chat a bit more about them. 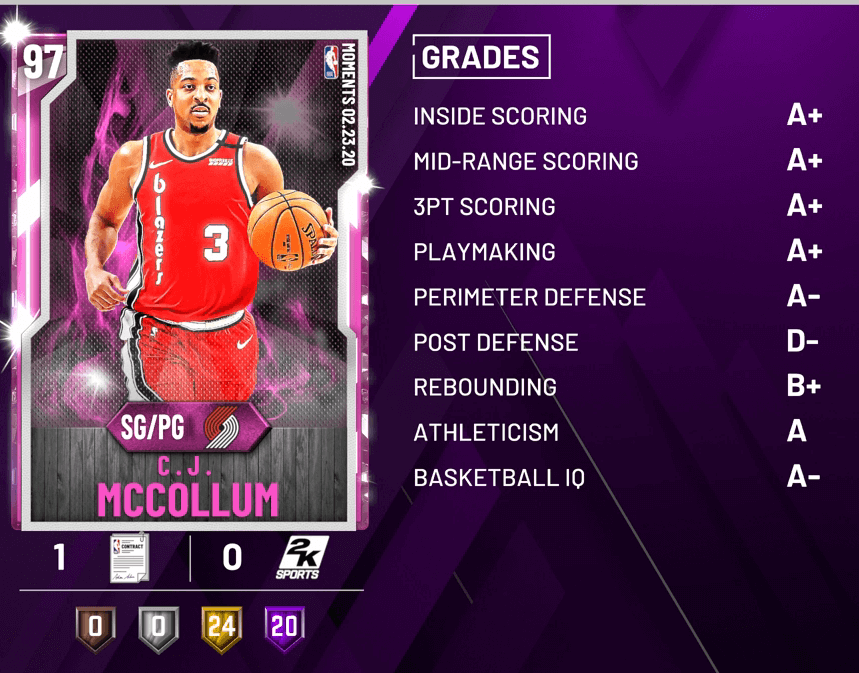 Analysis: The issue with McCollum in MyTeam is usually easy enough to explain. His game in real life does not always easily translate to video games. He’s a player who thrives on making tough shots off the bounce and under the rim, and those guys are hard to get right in a video game. I have not disliked using him as much as some other people because I’ve always enjoyed using “crafty” players when possible, and McCollum’s shot has always been a favorite of mine in 2K.

A lot of those same “negative” characteristics still apply here. Regardless, McCollum has an enjoyable jumper, not because it’s the easiest to green, but because it’s just very smooth. There is something inherently enjoyable about hitting stepbacks and pull-up jumpers from mid-range with McCollum. These are not the most high-percentage shots or easiest shots to make in 2K, but I like trying to make a show out of using him.

C.J. has a lot of perks he does not usually have as well because he gets point guard eligibility and gold Clamps. These are important things that make McCollum easier to squeeze into lineups. He’s 6-foot-3 so point guard is the ideal position for him in MyTeam. He has gold Clamps, so while he’s not great on defense or anything, at least he can provide the bare minimum amount of resistance. Now, he perhaps does not deserve gold Clamps, but 2K does a lot to make players better than they really are in real life for MyTeam, so I’m fine with it.

Beyond those aspects, this isn’t a super meta card or anything like that. I just think he’s very fun to use. He’s not anti-meta or anything so he’s safe to use in competitive play, but you need to use him in a different manner than your standard point guard. He’s not going to dunk on people, and he’s better when you lay off the turbo a bit and try to get a little creative off the bounce. There is absolutely a skill gap here where some people just won’t enjoy using him. However, if you put in the time and diversify your dribble game a bit, he can make some really pretty things happen out there.

Analysis: No Range Extender stinks for those people looking to turbo off screens or do a stepback and shoot from well beyond the 3-point line. I understand why people do it to take advantage of people off-balling on defense, and so if you need that to succeed, then this card will not be for you. However, Coby White has been a dream for me all season. His ruby Moments of the Week card was very good, and I have used him plenty in Play Now Online. He no longer has Steady Shooter like the ruby card, which is nice as well (and yet another example of 2K admitting defeat when it comes to that badge).

He’s got great animations and one of the five best shots in the game this year. The perk of him over McCollum is he has a little more straight-line driving ability and he’s taller at 6-foot-5. On top of that, he can jam a little more. He’s not as well rounded as C.J., but I don’t think lacking Range Extender ends his chances of being intriguing.

Another issue is he doesn’t have a ton of playmaking HOF badges, so he’s more going to be a scorer than a distributor. Lastly, he still feels slow on defense so gold Clamps only hides so much of that issue. I would not want to use him on my top-tier team, but if you’re trying to use a squad with a little lower overall rating, he’s still a great choice. It’s a lot like McCollum though where the ceiling for this card is high, but the floor is low as well. I think the McCollum is a little harder to use than this card, but White still fits in the same category.