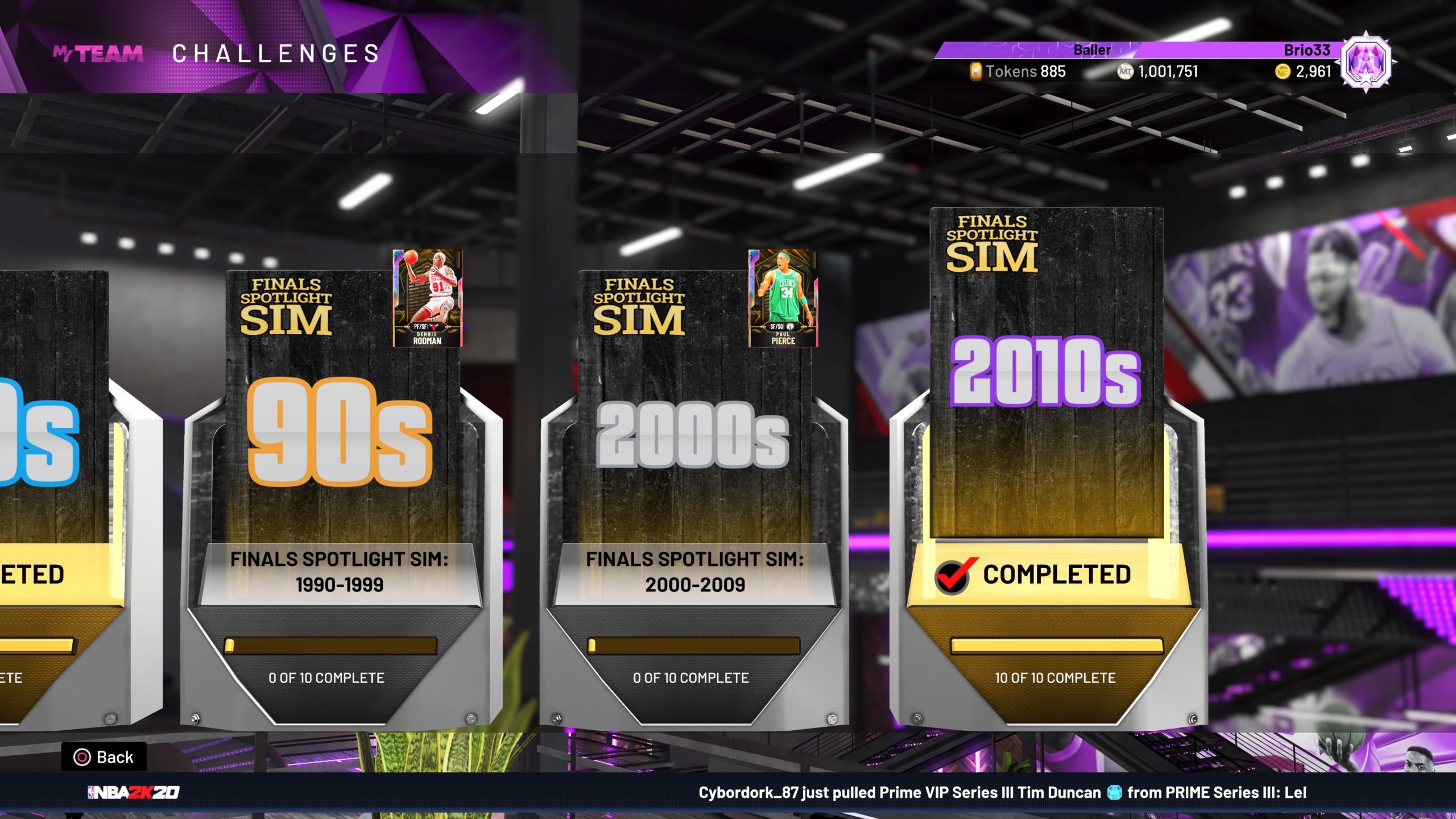 Some cards are just players I personally would like to see, or are players who I think would be worth the grind/fun to use. But most of these cards are simply needed to round out the teams we’d be playing against. 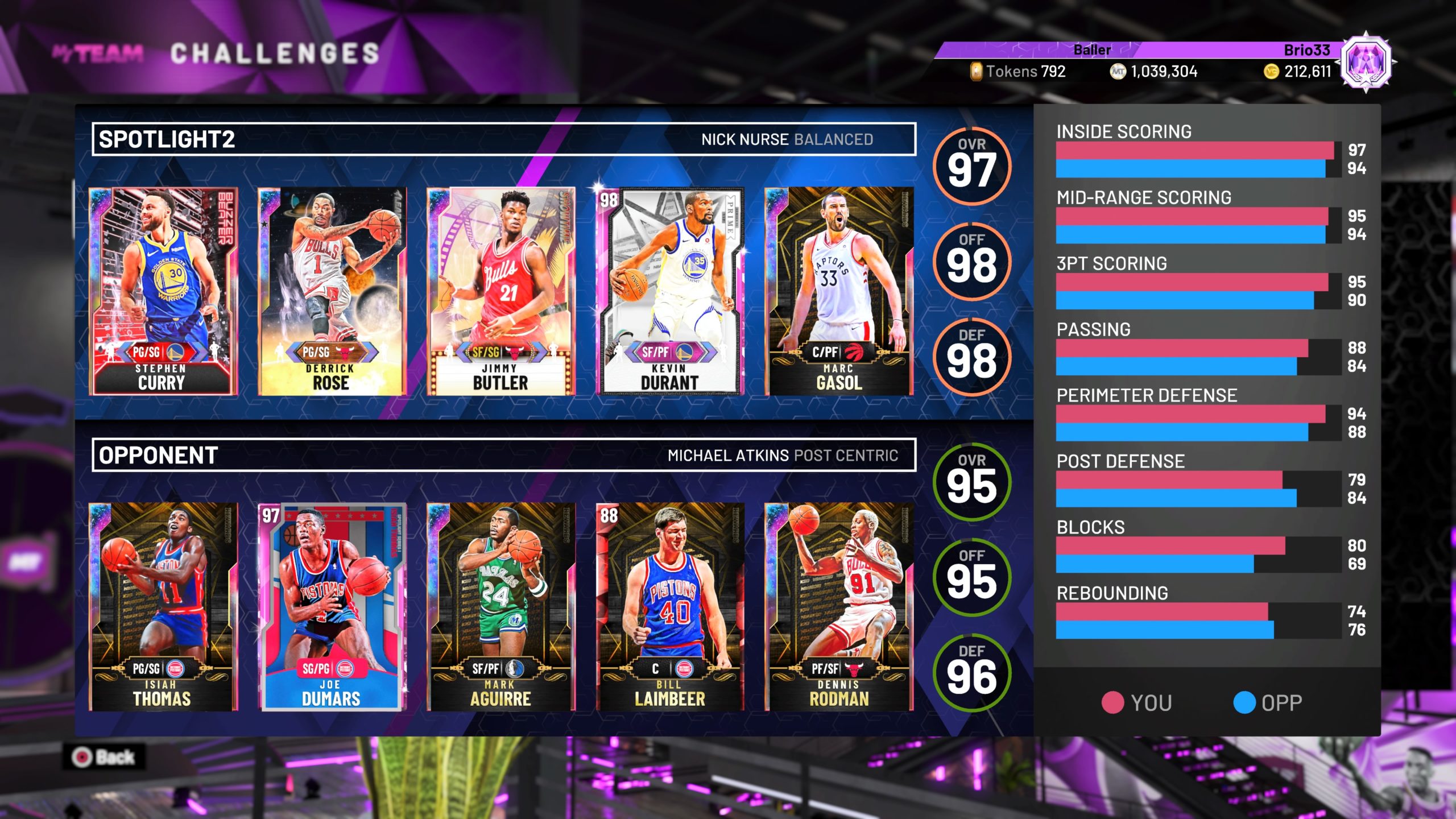 For example, the Pistons team above is stacked — except for ruby Bill Laimbeer. So my Pistons reward recommendation will be (spoiler alert) an opal Laimbeer, which is similar to the Finals Sim game galaxy opal Rodman who was also a reward.

My goal is also to maximize the challenge of the teams we’d be playing against. If/when we get these All-Time Sim games, I bet they’ll come at the very end of the year, at which point we’ll all have supremely stacked teams of our own. Why not throw another 30 awesome galaxy opals into the collection?

76ers: Bobby Jones
One of the best defenders to ever do it, I’d love to see a fantasy version of him with all of the best offensive stats/badges. Plus, he’s the missing galaxy opal in a starting lineup that could feature Iverson, Dr. J, Billy Cunningham (evolved) and Wilt the Stilt.

Bucks: Marques Johnson
Marques hasn’t had a new card since Legacy Series 2, plus he’d fill out a lineup of Kareem, Oscar, Giannis and Sidney Moncrief (who with the Giannis duo becomes a galaxy opal).

Bulls: Bob Love
The Bulls already have an insane lineup, so I’d just like to see a new and improved Bob Love card that could play SF/PF.

Cavs: Zydrunas Ilgauskas
Big Z has a pretty good diamond, but at this point in the game let’s get a version of him who has the athleticism to match up with galaxy opal Kareem and maybe even can play the point. Why not? Plus, he’d round out a starting five that has galaxy opal LeBron, Kyrie and Kevin Love, plus pink diamond Larry Nance who becomes a galaxy opal alongside his duo, Mark Price.

Celtics: Marcus Smart
The Celtics definitely don’t need any help from me to create a galaxy opal starting five (or 10-man rotation), so I’d just like to see Marcus Smart here for the fun of it. His diamond Moments card is just extraordinarily outdated at this point.

Clippers: Montrezl Harrell
The Clippers are also stacked, so it’s time to update Montrezl, who only has a Ruby. A galaxy opal version of him could be crazy fun. Plus, they should make a duo with him and the diamond reward Lou Williams, jumping him up to a galaxy opal too.

Grizzlies: Bonzi Wells
Bonzi doesn’t even have a card in MyTeam, but he’s on the All-Time Grizzlies in the main roster so I don’t think it’s a rights issue. C’mon 2K, let’s show Bonzi some love, he could be great!

Hawks: Lou Hudson
The Hawks need another galaxy opal guard next to Doc Rivers in the starting lineup, and who better than Sweet Lou. His current best card is a diamond from Legacy: Series 1.

Heat: Udonis Haslem
Udonis Haslem IS the Miami Heat, and he hasn’t been given a card since the D-Wade Spotlight packs from Week 1. That was one of the first evolution cards (emerald to ruby) that I put energy into, but it’s time to reward that man with a galaxy opal.

Hornets: Nicolas Batum
This was the card I asked for two months ago, and I’m kind of surprised he hasn’t gotten that galaxy opal upgrade yet. Better late than never, 2K.

Jazz: Darrell Griffith
Gordon Hayward finally got the galaxy opal he deserves, so now it’s time to turn back the clock and reward Dr. Dunkenstein. Darrell was one of the first Prime VIP cards, and he has seemingly been forgotten about since then.

Kings: Kevin Martin
He was one of the best shooters in the game for a couple seasons and had an amethyst that could evo to diamond, but even with all that work he couldn’t get HOF range extender. Give this man a card worthy of a 3-point assassin.

Knicks: Bernard King
Bernard is another classic NBA player who hasn’t gotten much recent MyTeam respect. Plus that All-Time Knicks team needs some galaxy opal help on the wing.

Lakers: George Mikan
The Lakers could already be a full team of galaxy opals, but for some reason Mikan hasn’t had a card since his Legacy: Series 1 diamond. That will surely be rectified soon (long overdue token market update maybe), but if not, he could be a reward card here.

Magic: Mo Freakin’ Bamba
I vote Mo, unless of course 2K wants to give Tracy McGrady more opals. (I’m shocked he didn’t get another duplicate in the Prime: Series 3 finale, but more on that disappointment another time.) But can you imagine going up against an all-galaxy opal starting lineup of Penny, T-Mac, Rashard Lewis, Mo and Shaq? Plus, then they could bring galaxy opal SF/PG Hedo off the bench. Scary!

Mavericks: Jamal Mashburn, Jimmy Jackson and Jason Kidd
I still think this should happen. These could all be pink diamond cards that when played together become a galaxy opal dynamic trio. Jamal currently only has a diamond, Jimmy has been stuck with a sapphire for ages, and J-Kidd has a galaxy opal but no pink diamond.

Nets: Richard Jefferson
His spotlight reward card from earlier in the year was great, so it’s time to give him the elite upgrade. And with it, the Nets galaxy opal starting lineup becomes Kidd, Vince Carter, Dr. J, Jefferson and pink diamond Brook Lopez.

Nuggets: Raef LaFretz
The Nuggets are pretty covered in the galaxy opal category, so I’d personally just love to see a galaxy opal Raef. He is usually one of my favorite cards to use early in a typical 2K cycle, but he never seems to get any late-game love.

Pacers: Jermaine O’Neal
Post game, check. Defense/rebounding, check. Outside shooting, check. I’m honestly surprised he hasn’t gotten a galaxy opal yet because he seems like the perfect kind of player for a modern NBA style.

Pelicans: Tyreke Evans
Tyreke seems like another great juiced card opportunity. He’s a 6-foot-6 SF/PG with playmaking ability who can guard multiple positions. Plus, he isn’t represented in MyTeam at all so far this year.

Pistons: Bill Laimbeer
Like I said at the very beginning, the Pistons need a galaxy opal center. With Bill, their lineup becomes Isiah, Stackhouse, Grant Hill, Ben Wallace and then Bill. Then they can still bring Rodman off the bench with pink diamond Joe Dumars, though Joe is also deserving of an upgrade.

Raptors: Morris Peterson
The Raptors have tons of galaxy opals to choose from already, but Peterson always gets stuck in the ruby/amethyst tier and is a fan favorite card in need of an upgrade.

Rockets: Chandler Parsons
Last time I called for a Moses Malone, but let’s be real, the Rockets are set at center. But in an alternate reality, Parsons could have been an elite 6-foot-10 playmaking wing who happened to be a sniper. Let’s explore that.

Spurs: LaMarcus Aldridge
The Spurs are stacked, so this is a personal pick. Yes, I know he has a 98 rated pink diamond already, but let’s go crazy and give him a speed-boosting, sharpshooting and rim running card. Think Kareem, but with LA’s awesome jump shot.

Suns: Shawn Marion
The Matrix was one of the most versatile players in the NBA, and in a modern league he would fit right in on the wing or as a forward. Oh yeah, and for some reason his current best card (the pink diamond) doesn’t even have clamps.

Thunder/Sonics: Xavier McDaniel
I loved his amethyst card, but never could justify putting in the time to evo it all the way to pink diamond. Here, he could finally be unleashed at his full potential.

Timberwolves: Stephon Marbury
The All-Time Wolves need a galaxy opal point guard, and Marbury would be great alongside Garnett, Love, Towns and Jimmy Butler. (I guess in this scenario, maybe KG could play the 3?)

Trail Blazers: Damian Lillard
Somehow Dame doesn’t have a galaxy opal yet. He was just announced as the cover athlete for 2K21 on the same day that Buzzer Beater packs came out, but we got Baron Davis instead. Come on 2K, it’s waaaaay past Dame time.

Warriors: Kevin Durant
The Warriors are covered when it comes to galaxy opals, so just for fun I’d vote that Durant gets another galaxy opal where he can play SF/C, kind of like how that pink diamond Giannis gets a SG/C card. I mean it’s July, why not.

Wizards: Wes Unseld
The pink diamond where he can play PG/SG is great, but give this man a galaxy opal at his actual position of center. Another fun option here could be to give MJ a Wizards galaxy opal.

West Collection Reward: 750 Tokens
To get a token reward galaxy opal of your choice.

East Collection Reward: 750 Tokens
To get a token reward galaxy opal of your choice.

Final Collection Reward: 1 Million MT
To go on an end-game galaxy opal shopping spree. Hopefully, by then Rashard Lewis will be a little cheaper. 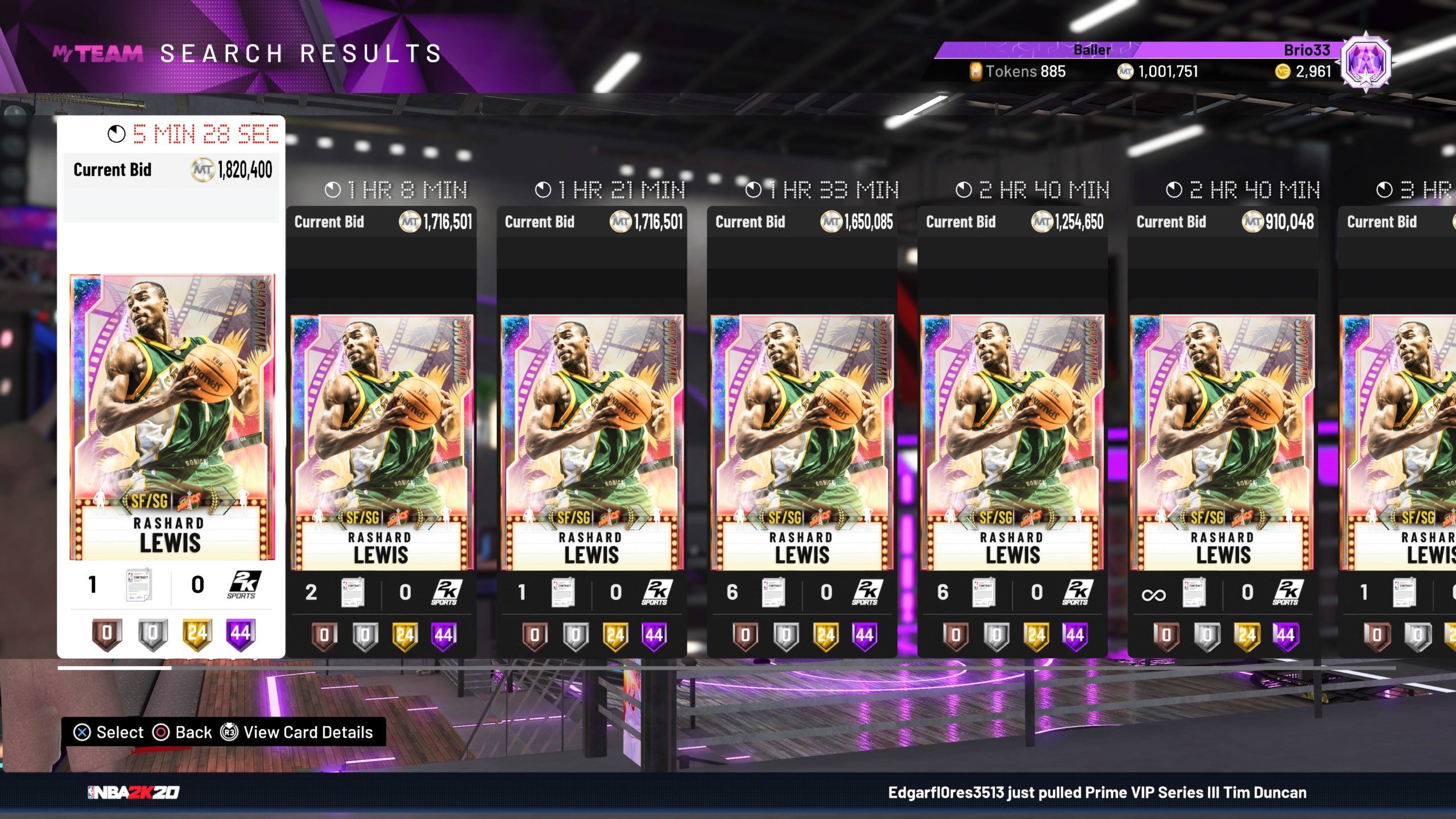 By all means, leave your own wishlist in the comments below. If 2K is looking for inspiration on reward cards to create, perhaps they’ll borrow some of our ideas. Thanks everyone!