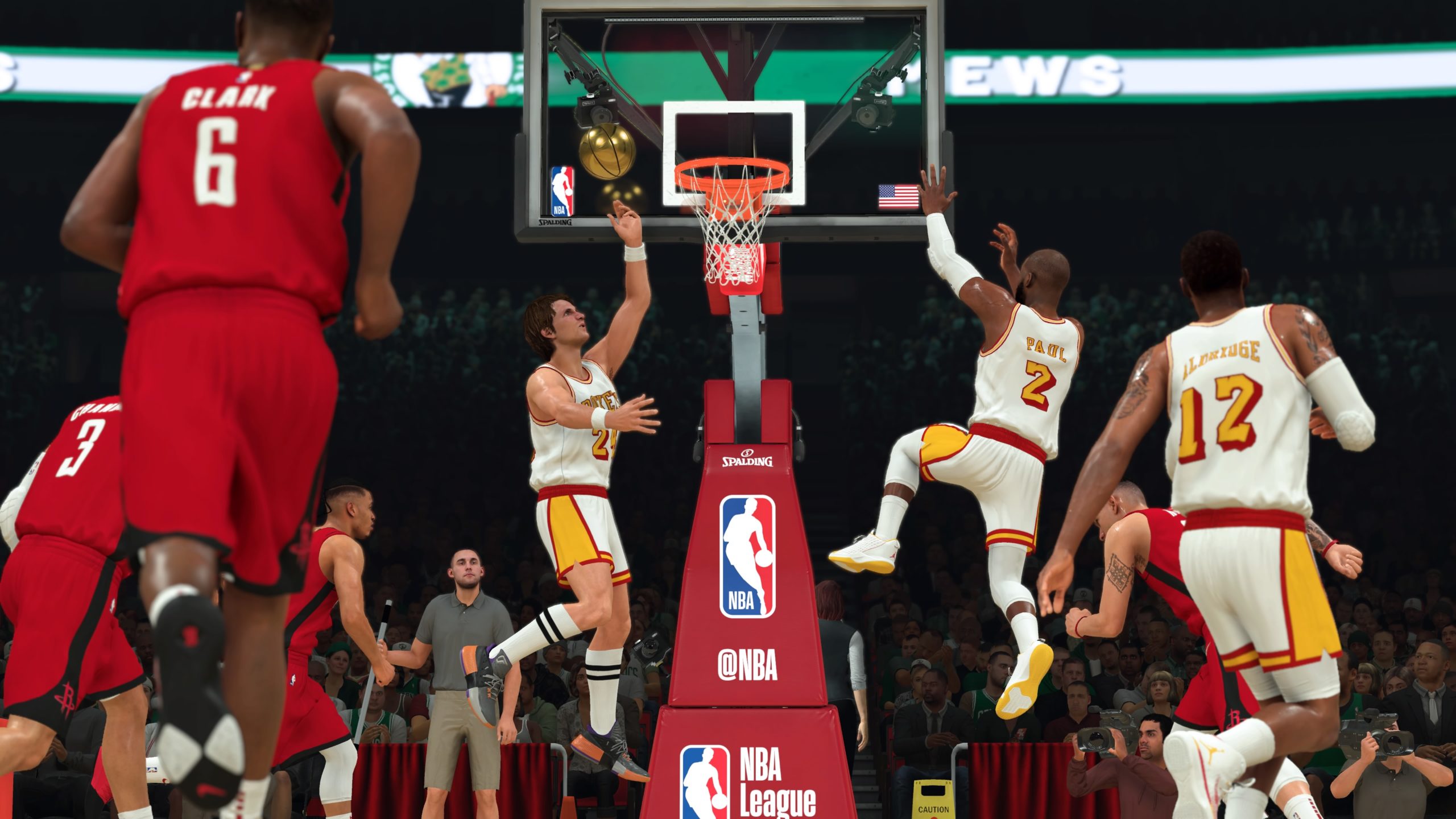 Attention MyTeam Players: DO NOT Open “Super Packs” I beg of you. 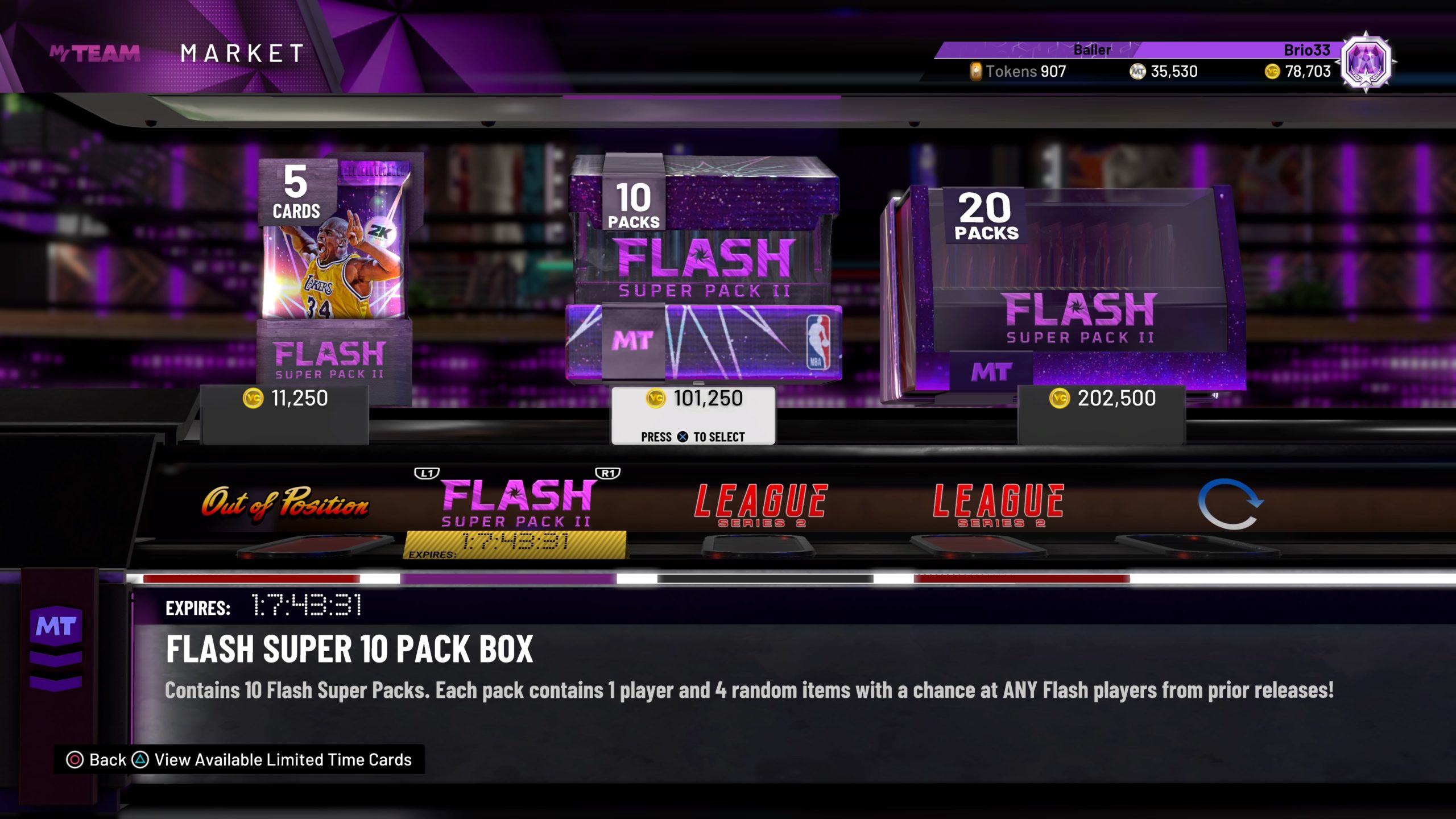 I got suckered in with a “bonus VC” offer on the home screen of MyTeam, and went for it to open a 10-pack box. Two Nicolas Batum cards (and eight other pieces of garbage) later, I literally thought to myself, “Wow that sucked, now I have to open another 10 pack box to try and make this worth it.”

Because of course I would get the good stuff then, right? Like by suffering through the agony of a bad box, I’d somehow earned to right to get opals and pink diamonds…

There were zero “Flash” cards in that second box. Nothing of value at all, actually. What a joke. So yeah, this is probably common sense to most everyone else but me, but don’t be tricked by seeing that long list of “possible” opals you can pull. It’s a waste of money.

Though I did snag a pink diamond Larry Bird for 40K on the auction house (last week he was in the 75-90K range), so that’s cool. I guess the moral of the story is that all of you should open these packs, then I’ll reap the rewards in the auction house.

Seriously though, I really just wanted to see that opal glow, and I figured this would be my best chance. It wasn’t, but it got me thinking about opals on a broader scale, and cards I’d like to see at some point.

This led to me to daydreaming about potential All-Time Spotlight Sim Challenges, which hopefully are coming at some point if the pattern (mirroring Domination) continues: 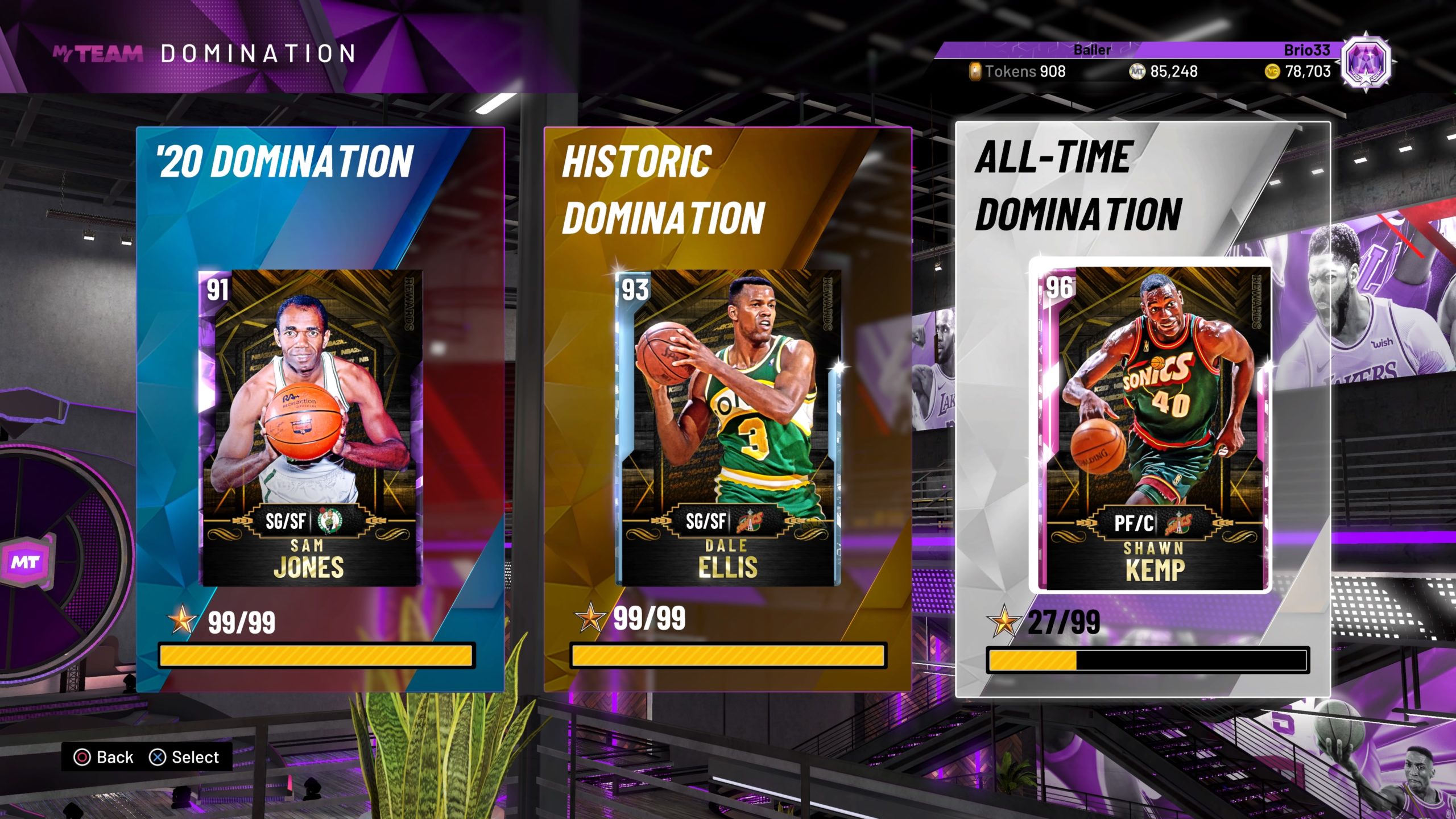 For all we know, 2K could be working on these challenges now and are brainstorming rewards for beating each team. And what if those rewards are opals? Alllllllll opals?!? How amazing would that be!?!?!?

The correct answer is “pretty darn amazing.” As it should be.

If we’re going to go up against all-time teams with the current best card for each player, some of those teams will be insanely difficult on Hall of Fame difficulty. Here are a few starting lineups from All-Time Domination, but imagine that these are all opals you’d be matching up with. 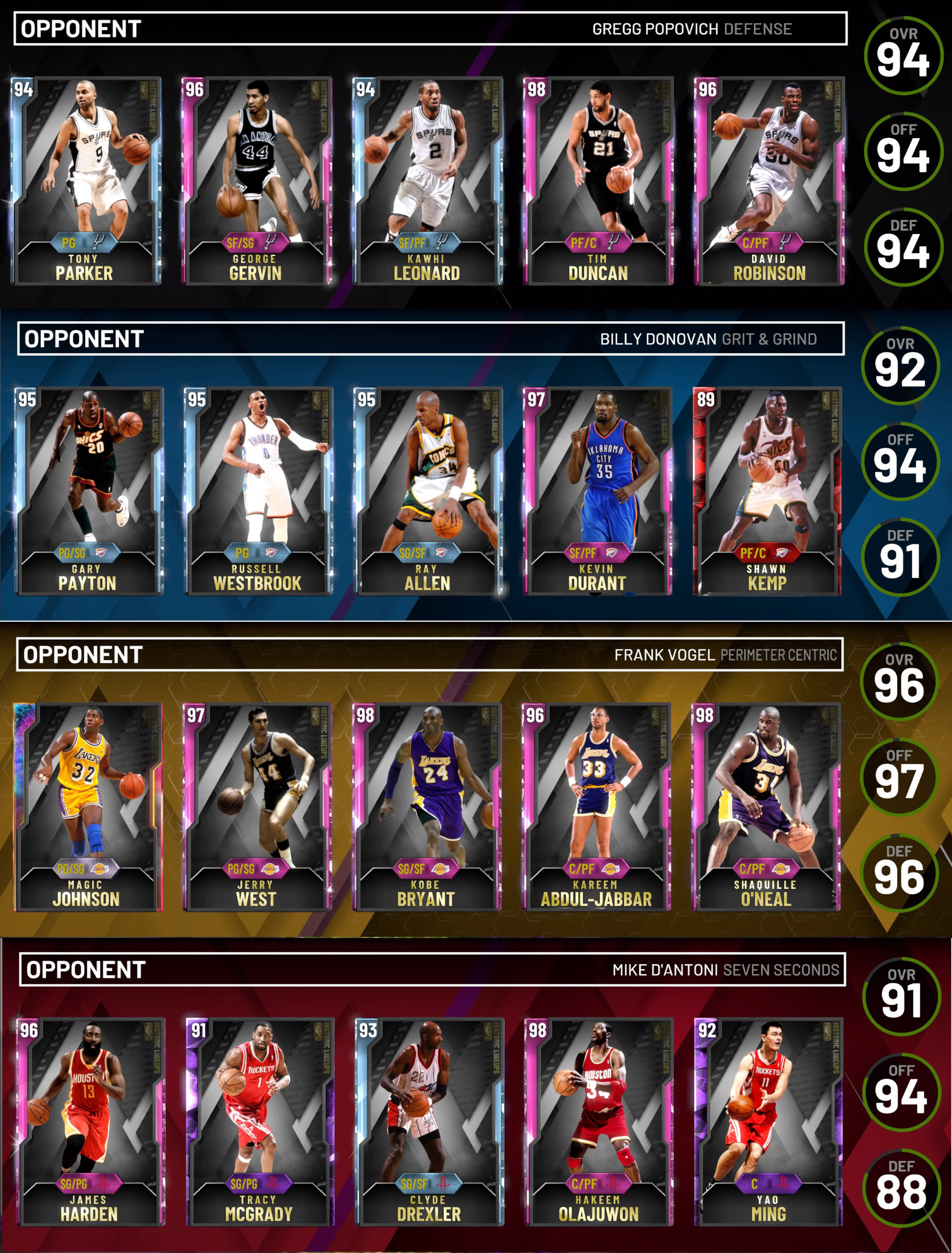 76ers: Bobby Jones
One of the best defenders to ever do it, I’d love to see a fantasy version of him with all of the best offensive stats/badges.

Bucks: Khris Middleton
I really love his pink diamond and feel like he’s got a lot of potential. So let’s see what a fantasy version of Khris would look like if he eclipsed Giannis as the Bucks’ best player.

Bulls: Scottie Pippen
Give those of us who don’t want to collect 2,300 cards (plus spend the time to evolve him) a chance at an elite Pippen.

Cavs: LeBron James (SF/SG)
Now according to basketball-reference.com, LeBron was a SG in his rookie year. Then he moved up to SF during the subsequent Cleveland years. I’m sure LeBron will get a SF/PF opal with Miami in packs that will cost an insane amount of MT, so why not give us another opal option for the King?

Celtics: Kevin McHale
Arguably the best post player in history, but this opal could have the athleticism of Anthony Davis and the playmaking stats/badges of Jokic.

Clippers: Darius Miles + Quinten Richardson
Yup you get both, but as pink diamonds. Then of course they’re a dynamic duo that turn into opals when played together.

Grizzlies: Justice Winslow
The pink diamond moments card he got has been a high-value card for weeks now. I’ve actually bought and flipped it numerous times because even after a market crash he always jumps back up — probably because of his ability to play the point.

Hawks: Cliff Hagan
I cringe when I see his diamond come up on the weekly wheel spin or TTO boards, so it’s only fair he gets an upgrade. He’s been holding down the fort since the very beginning of the year.

Heat: Eddie Jones
He hasn’t gotten much love since super early in the season. An opal version of Eddie could be one of the best all-around wing players in the game.

Hornets: Nicolas Batum
Sorry Eddie, an opal upgrade for the amazing diamond Batum could actually be the best all-around wing in the game.

Jazz: Gordon Hayward
Gordon needs a card that’s better than a diamond. He hasn’t had one in years. And the guy loves video games, so he should be better represented in this one.

Kings: Kevin Martin
He’s one of the best shooters in the game, and had an amethyst that could evo to diamond, but even with all that work he couldn’t get HOF range extender. C’mon now 2K, give this man a card worthy of an assassin.

Knicks: Jeremy Lin
Linsanity needs an opal. The past few years he’s gotten a pink diamond at best, and usually he’s not treated even with that amount of respect.

Lakers: Mark Madsen
This could be the Lakers version of always giving Brian Scalabrine an insane 2K card. Besides, every other Lakers playe will probably already have an opal by then.

Magic: Rashard Lewis
Back when his pink diamond came out, 8 HOF badges was considered amazing. What if he had an opal with 38? (Who am I kidding, by the time any of these cards come out, 50-plus HOF badges will probably be the norm.)

Mavericks: Jamal Mashburn, Jimmy Jackson and Jason Kidd
Similar to the Clippers pair up above, these could all be pink diamond cards that when played together, become opals.

Nets: Keith Van Horn
If done right, he could be the second coming of glitched Hedo.

Nuggets: Michael Porter Jr.
I was going to suggest Kiki Vandeweghe here, but he just recently got an opal. I’m going to take a peek into the future and predict that I never even saw him come up on any of my boards. But anyways, an opal MPJ could be similar (or superior) to KD, which is awesome. Though I’ll make another prediction and say that 2K wouldn’t miss an opportunity to make money off him in packs somewhere down the road, probably in some sort of Future Stars set. (Which is why I left other obvious names off of this list, like Cam Reddish or Zion, for example)

Pacers: Victor Oladipo
His comeback this year didn’t go quite as planned (especially if the season is truly over), but why not give him a place to shine on the virtual hardwood.

Pelicans: Jrue Holiday
An opal Jrue could be an unstoppable defensive gem.

Pistons: Grant Hill
Yes he’s in the token market, but that card is insanely out of date. Grant needs a true end-game card.

Raptors: Morris Peterson
This guy always gets stuck in the ruby/amethyst tier, so let’s see what happens when he’s fully unleashed.

Rockets: Moses Malone
Make Moses a cross between opal Shaq and Draymond Green, and I think a lot of people would be very happy.

Spurs: George Gervin
The Iceman needs a much better card than the pink diamond that’s been in the token market since day 1.

Suns: Shawn Marion
The Matrix is always fun to use in MyTeam (despite his weird shot), but as an opal he could switch all five positions on defense, which is extremely valuable next to the Kobes and LeBrons of the world.

Trail Blazers: LaMarcus Aldridge
His cards are always great with a nice shot release, but to my knowledge he’s never gotten an opal. His pink diamond last year was one of my favorite cards, even with only 3 HOF badges. Time for an upgrade.

Warriors: Rick Barry
His pink diamond is so very out-of-date, and he’s not really a card that people buy packs for, so this would be the perfect place for him — Especially if he were a SF/SG instead of a SF/PF.

Wizards: Wes Unseld
His pink diamond is also out-of-date, and his Domination reward card from a couple years ago was awesome. Kind of what I’d imagine an opal Zion could be like. Another fun option here could be to give MJ a Wizards opal…

Final Collection Reward: All-99 rated Giannis who can play all five positions.
Mic-drop.

Please, by all means, leave your own wishlist in the comments below. If 2K is looking for inspiration on reward cards to create, perhaps if enough people comment, they’ll borrow some of these ideas. Thanks everyone.