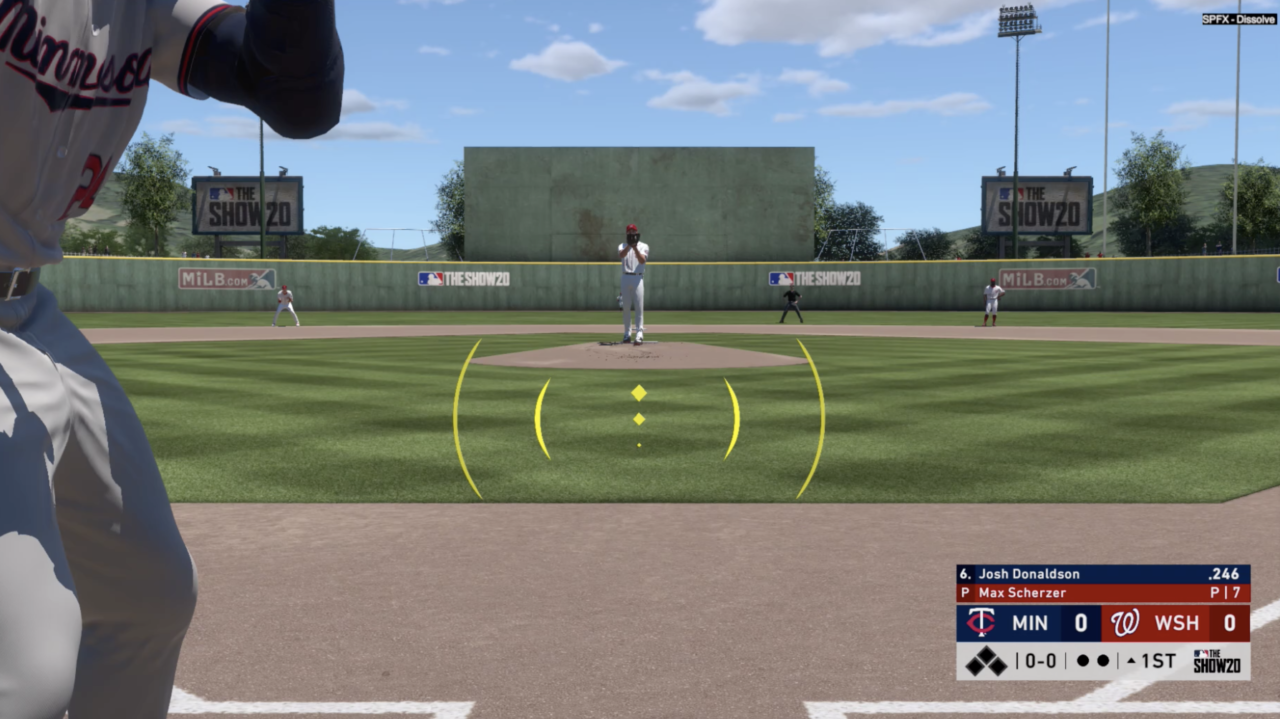 After watching the second stream of the day, this one dedicated to hitting, one thing became very clear: the developers want to make sure appropriate outcomes take place at the plate. The hitting engine in MLB The Show 20 will try to mimic that of true Major League Baseball. Developers have built a new outcome mechanism that should allow the game to play more like real life.

The new Perfect-Perfect swing system will not guarantee a hit or a home run, but if the beta is any indication, it might as well. Data collected during the beta on over 5 million swings showed great promise on perfect swings. Over the course of four days, users that generated a Perfect-Perfect swing ended up with a base hit 86 percent of the time. Better still, users that generated a Good-Good swing or Good-Squared Up swing hit .632 or better, depending on the quality of the swing. 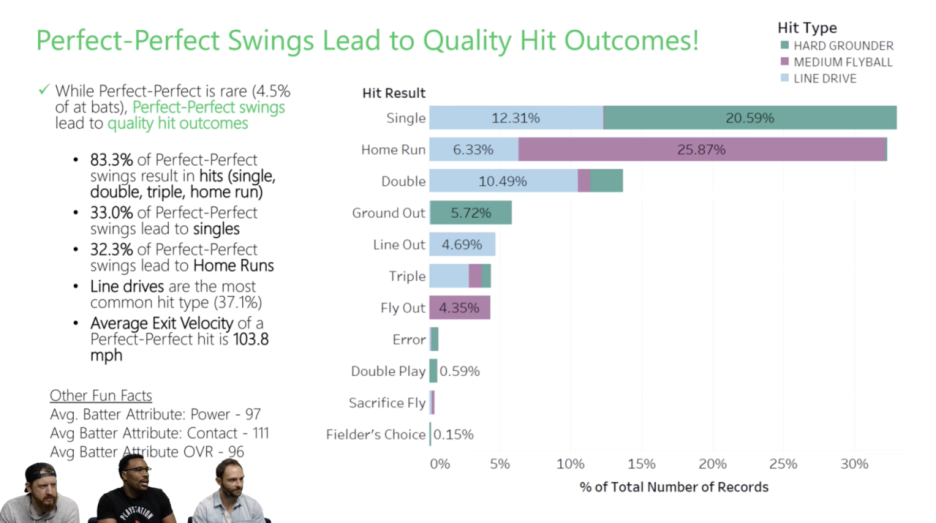 This is going to be a welcome addition to MLB The Show 20 as ’19 famously struggled with line outs into the outfield on perfect swings. The beta showed that less than 5 perfect of Perfect-Perfect swings resulted in line outs.

Better still, the new hitting engine will provide accurate exit velocities comparable to that on Major League Baseball. Most balls hit off the bat will fall in the 85 mph to 100 mph range. The average ball hit on a Perfect-Perfect swing was almost 104 mph — a definitive step in the right direction. 10 percent of all hits in the beta were hit over 100 mph. Just over 6 percent were hit over 105 mph. Finally, less than 1 percent of all hits in the beta exceeded 110 mph. All of these figures compare favorably to that of Major League Baseball. 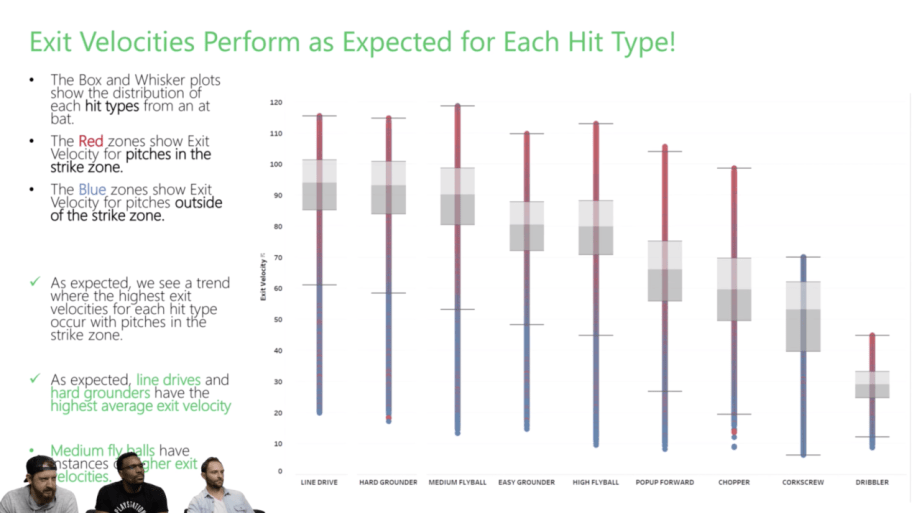 So what drives these outcomes? What power does a user have over how hard he hits the ball? San Diego Studio made sure to address this is a big way with a completely overhauled PCI system.

The PCI will now have three clearly-defined regions that dictate the outcome of swinging at a pitch. The biggest frame, a frame we’re all already accustomed to, will be the vision cone. The vision cone will help show what region a player has the ability to produce poor hit outcomes and foul balls.

Inside the vision cone, a second cone described as the “contact zone” will be a zone that produces good contact — line drives and hard ground balls.

Better yet, inside the contact zone will be the perfect-perfect zone — a tiny zone highlighted by three stacked dots used to describe what kind of hitter you have at the plate. The vertical dot pattern will vary based on a hitter’s strengths. In the developer’s example, Josh Donaldson was a hitter with a big dot at the top of his perfect-perfect zone, with two smaller dots below it. This is to signify a power hitter who succeeds when hitting fly balls. By comparison, Kurt Suzuki was highlighted with a big perfect-perfect dot at the bottom of his stack. Suzuki succeeds best when hitting hard line drives and ground balls.

These additions should certainly help, at bare minimum, provide an accurate feedback system to hitters wondering why they didn’t get a base hit. All the information one could need to describe their swing will be there it seems. How accurately this system is employed in-game remains to be seen, but the examples provided during today’s stream were certainly encouraging.

As if a new hitting feedback system wasn’t enough, San Diego Studio will be introducing a fully customizable PCI system this year, complete with thousands upon thousands of options to make your experience at the plate the most aesthetically pleasing as possible. All three zone cones will be fully customizable into different symbols, much like a crosshair system employed in a lot of first-person shooters. These symbols will come with an opacity slider, as well as a wide color-gamut to change the PCI hue to your liking. The amount of personalization in this appears off the charts and will help users develop a unique identity at the plate. Get ready for a lot of “THE BEST PCI SETUP IN MLB THE SHOW 20!” tutorials on YouTube.

On the pitching side, a new quirk should allow some pitchers to really surge in online usability. The quirk, yet to be named, will allow secondary offerings to reach speeds outside of the traditional pitch-speed spectrum. Guys like Aroldis Chapman, Jordan Hicks, Noah Syndergaard and Jose Alvarado all possess secondary offerings that could never hit triple digits in MLB The Show 19. That will be an issue no longer. Two-seam fastballs and sinkers will now have the ability to reach supersonic speeds.

In their example, developers showed off a 97 mph Syndergaard sinker, as well as a 101 mph two-seamer from Jose Alvarado. Both pitches were disgusting and will be a huge pain to hit in online play this season. Good luck.

Well, we were sort of right! Not only will Tom Glavine be joining the cast of legends in Diamond Dynasty, Greg Maddux and John Smoltz will join the game as well. Buckle up.

MLB The Show 20 Livestream - "Perfect-Perfect" Hitting (Archive Included)
MLB The Show 20: Looking to the Past and Present to Predict Franchise Mode Rebranding