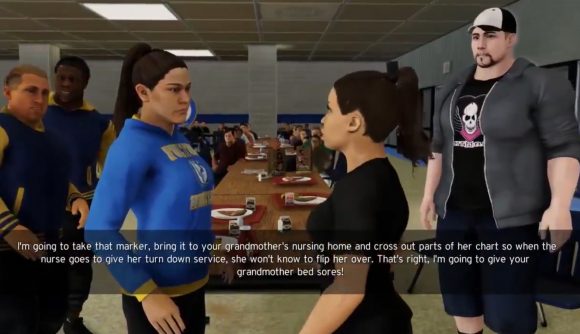 WWE 2K20 essentially became an internet meme on the day of its release. This is not a good look for Visual Concepts considering the studio is now the sole developer of the game after the split with Yuke’s.

But all is not lost, WWE fans. Of course I’ve seen all the crazy glitches videos out there, and some of them are just bonkers. But playing the game myself for about six to seven hours so far, I’ve found the glitches to be minimal, only really running into a minor one here and there. And by me saying that, I am in no way making excuses for the game or marginalizing what others have experienced. It could also be that the patch released today (Tuesday) has fixed some issues, although at the time of this writing no details have been given on that patch. (We’ll post the patch notes on OS when we have them.)

The Graphics Have Been Downgraded

The biggest thing I noticed right off the bat is that there is an obvious graphical downgrade in pretty much every aspect of the game. It’s especially noticeable with hair. It’s just terrible. Last year was a big step up in the hair department, but this year is just plain bad. I am pretty baffled by this. I don’t know if it has something to do with the coding of the game being changed once Yuke’s left, or maybe new code they had to write made it so they had to lower the quality for the frame rate to stay steady. But any way you slice it, it’s a disappointment.

The Gameplay Remains In A Rest Hold

As far as gameplay goes, take away the glitches for a moment and think of just a one-on-one match. In this situation, the gameplay isn’t bad. I would say it’s almost exactly like 2K19, which isn’t necessarily a bad thing from my perspective. The gameplay was pretty well received for the most part last year, and I was someone who was part of that crowd. However, one bad thing that is pretty much immediately noticeable is the collision detection seems to be worse than last year. Using strikes are hit or miss, and miss a little more than they should. We’ll see if this can be improved via patches. 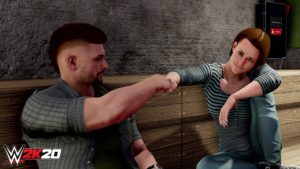 Outside The Ring, There’s More Hope

Playing a bit of career mode, let’s just say it looks terrible, but the story is actually good so far — there are some genuinely humorous moments. I obviously have not been able to get too deep into it since it was just released, but what I did play was very enjoyable. Well, aside from the horrible graphics of the main character, and the even worse graphics for the NPC characters. I will delve much deeper into this mode in the full review.

As far as I can tell, not much has changed mode-wise. There really isn’t a new mode in the game. You could make an argument that the horror-centric arenas and special zombie characters make up a new mode, but we can’t even play it yet so there’s not much I can really say about it.

The creation suite is still excellent. There is just so much great artwork done by the people who upload characters and arenas. It’s simple and streamlined.

As for Universe mode, I will dig deeper into that in my full review as well. That being said, the interface is less confusing this year — at least for me. I’m getting ready to tackle some 2K Towers and start the Showcase mode, and will definitely write about those later as well.

All the bugs and glitches not withstanding, the game is still fun. If you’re not a WWE or wrestling fan in general, this game isn’t going to pull you into that universe. But if you are a huge wrestling fan like me, then I would say perhaps try to embrace the game and its faults — and there are some funny faults to enjoy — or maybe wait to see how serious VC is about patching gameplay and other issues. I’m very much hoping Visual Concepts will take this game seriously and spend a lot of time getting this to be a better overall game.

WWE 2K20 Controls Guide Revealed (Xbox One, PlayStation 4)
WWE 2K20 Review: You Might Want To Sit This One Out