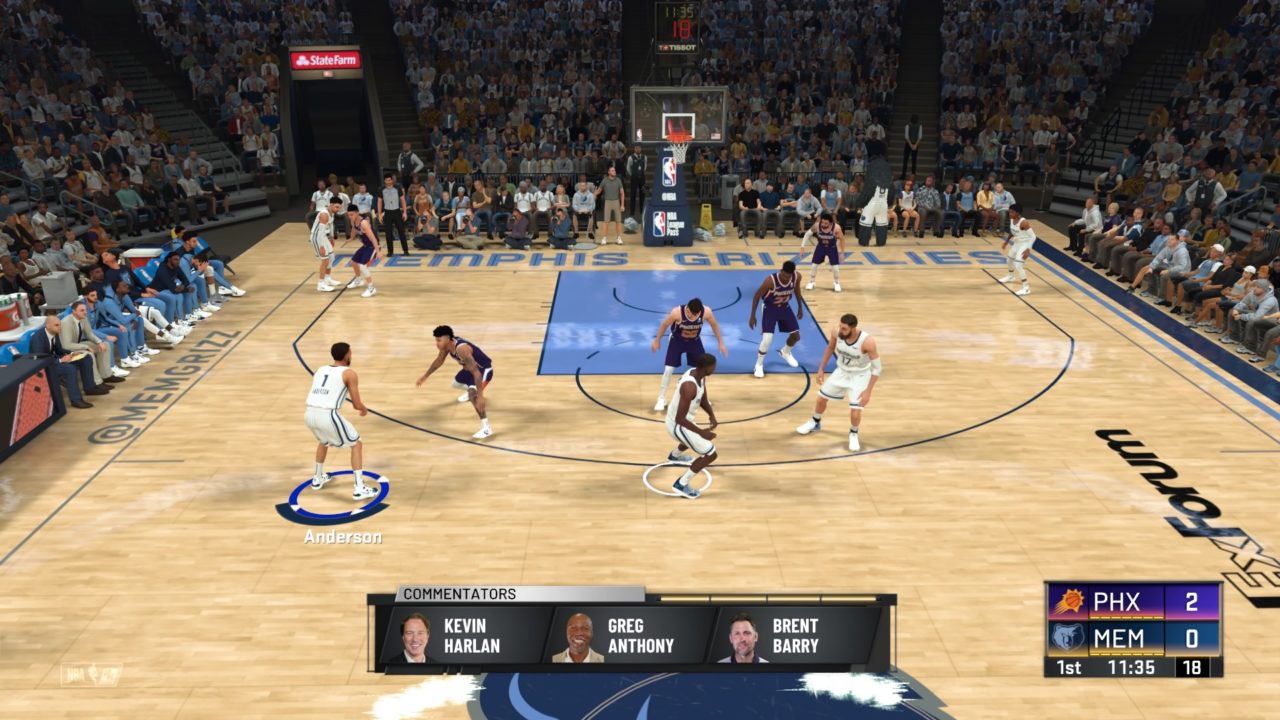 With more than a quarter of the NFL season behind us, it means the hot takes around the NBA are almost fully pre-heated. And while there aren’t a lot of similarities between the two most popular American sport leagues, there is a common thread woven between both sports, something that each and every team feels no matter what is publicly stated: the weight of preseason expectations.

If you’re a talented team, such as the Patriots or the Chiefs, or the Clippers or the Lakers, this is a weight you do not mind carrying. But what if you are as bad as everyone predicted? What if you’re historically awful?

What if you are the Miami Dolphins?

Woo boy, that is a burden that nobody wants to bear. The Dolphins are without any sort of star power whatsoever on the roster. They are as unattractive on the virtual gridiron as they are on the actual gridiron.

That leads us to today’s topic: Is there an NBA version of the Dolphins on deck for this NBA season? While it’s hard to imagine any team starting out 0-20, there are a handful of teams that look awful on paper. And awful teams are usually not fun to use in video games. Unless, of course, you and a buddy are choosing terrible teams on purpose as some sort of mutual punishment. But even then, if you’re just trying to avoid the elite, just take it down a few notches to the Mavericks or Magic. Why subject yourself to the New York Knicks if you aren’t being forced?

That said, let’s review four teams that are most likely to be Dolphins-level bad this season. (Spoiler alert: the Knicks did not make the cut. Or in this case, would that mean they did make the cut? Regardless, they are not one of the four teams listed below.)

They almost didn’t make this list for Devin Booker and Devin Booker alone. NBA analysts are split on him in real life, but on the virtual court, Booker is incredibly fun to use. Not only can he shoot, but he can get to the basket for an easy bucket almost anytime he wants. That typically makes for a great NBA player, but it always makes for a great 2K player. He’s one of the best to use in game.

Once you get past Booker, there isn’t a lot to get excited about with respect to the Suns. Rubio is a nice addition and backcourt mate for Booker, but he doesn’t rise to the level of a deciding factor when picking teams in 2K. Deandre Ayton is an exciting young prospect, but he gets lost in the shuffle among other more talented young players. Plus, his bread and butter is back to the basket, which isn’t as endearing to most of the 2K world as slashing guards and forwards.

The rest of the starting lineup is a yawn and their bench is suspect at best. The Suns haven’t won more than 24 games in the past four seasons, and while they should be at least somewhat better this season, expect another year of mediocrity from Phoenix. Until they prove otherwise through — gulp — sustained success, they will always be a candidate to be one of the worst teams in the league.

This is a difficult team to slot, because if you’re like me and you play with injuries off, you get John Wall. Wall with Bradley Beal form one of the best backcourts in the league, and one of the most fun to run with in 2K. But even in fantasy world where injuries can be healed with a simple toggle, I mean, just look at the Wizards depth chart. Their big man rotation is one of the worst in the entire league. And their wing rotation is, well, also one of the worst in the entire league.

As an irrational Pistons fan, you can talk me into getting excited to run with Ish Smith, but that’s exciting only for a few minutes, tops. The other 45 minutes of game action are going to be brutal. And just look at the rest of the roster.

Isaiah Thomas hasn’t been good in years. After that, what’s there? Justin Anderson? Hard yawn. Rui Hachimura adds the tiniest sliver of intrigue, if only because he’s new and it’s hard to predict rookie output.

It’s a shame because back when they were a playoff team, the Wizards were a sneaky fun team to use in the days of, say, NBA 2K15. A healthy Wall and Beal would still make for one of the best backcourts to use in the entire game, but there is almost literally nothing else to offer after that.

And if you play with injuries on? Stay safe, my friend.

Oh, how the mighty have fallen. As recently as NBA 2K18, this was one of the top teams to use in the game. And now they’re one of the worst. The lone bright spot is Kevin Love. Now that he’s stuck with a directionless franchise, people tend to forget how talented he is. He’s still one of the best shooting big men in the game today, and given how much time he spent in the shadows of LeBron and Kyrie, people forget how good he is at the high post. 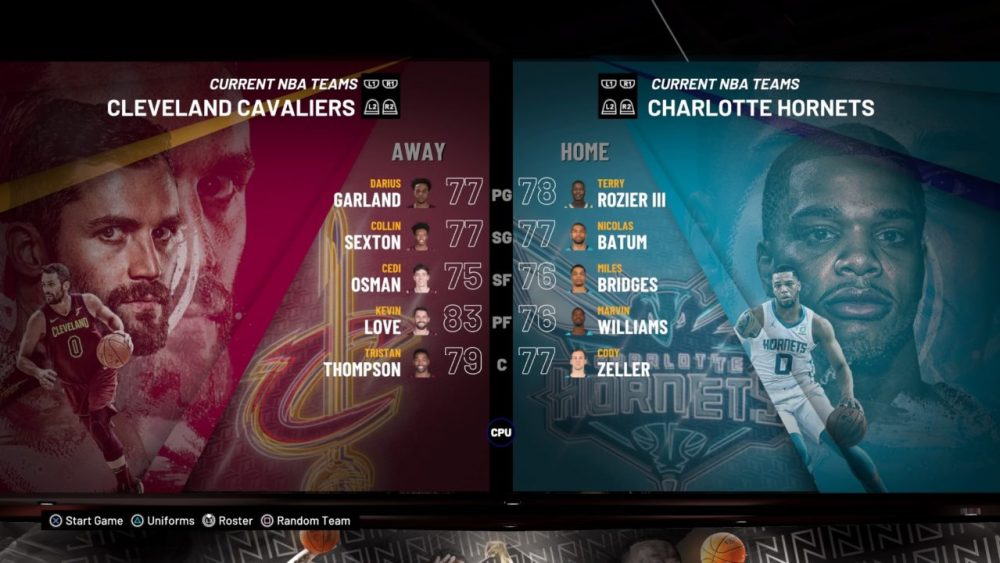 The problem is, who is he passing to? Collin Sexton? Cedi Osman? Brandon Knight? Tristan Thompson? Silent Bob? (Sorry, just making sure you’re still paying attention.) Young gun Kevin Porter Jr. adds some intrigue, Darius Garland is mysterious, and Larry Nance Jr. is always good for a few dunks a game that make you jump off the couch, but we’re really scraping the barrel here on reasons to play with the Cavs. That’s probably because there really isn’t a good reason to do so.

The Hornets are the last team on this list for a reason. I wouldn’t personally choose any team on this list when playing NBA 2K (except for maybe the Suns as Booker is that dude), but with the other three teams, you can at least point to a player or two who provides some marginal intrigue. Go ahead and try to find that with the Hornets. No, seriously. I’ll wait.

Their starting lineup is worse than a lot of second units on other teams. Think about that for a second. I can’t think of a single reason or player who would ever make me choose the Hornets. They would no doubt provide a fun challenge in MyLeague, but on the court as currently constructed? The hardest of hard passes.

Their best player (at least in 2K) is maybe Nicolas Batum? Now, I like Nicolas Batum. He was fantastic on Portland and has been fine for Charlotte some seasons, even if they drastically overestimated the market for his services back when they gave him what now feels like a $500 million extension. But as the best player on a team? You’re begging for last place.

For the purpose of this paragraph only, let’s assume that OS mandates I have to find something positive to say about the Hornets. Here’s what I came up with: Terry Rozier is fun. The 2K18 version of Terry Rozier was clutch for the Celtics in the playoffs with Kyrie hurt. 2K19 Rozier was, less so. He didn’t play well at all last year. So if you’re looking for a challenge, pick the Hornets and see if you can recapture some of that Scary Terry magic.

Okay, the positive paragraph is over so let’s snap back to a reality where they’re probably never making an NBA Jam T-shirt featuring Rozier and Batum, and nobody is going to willingly pick the Hornets in 2K.