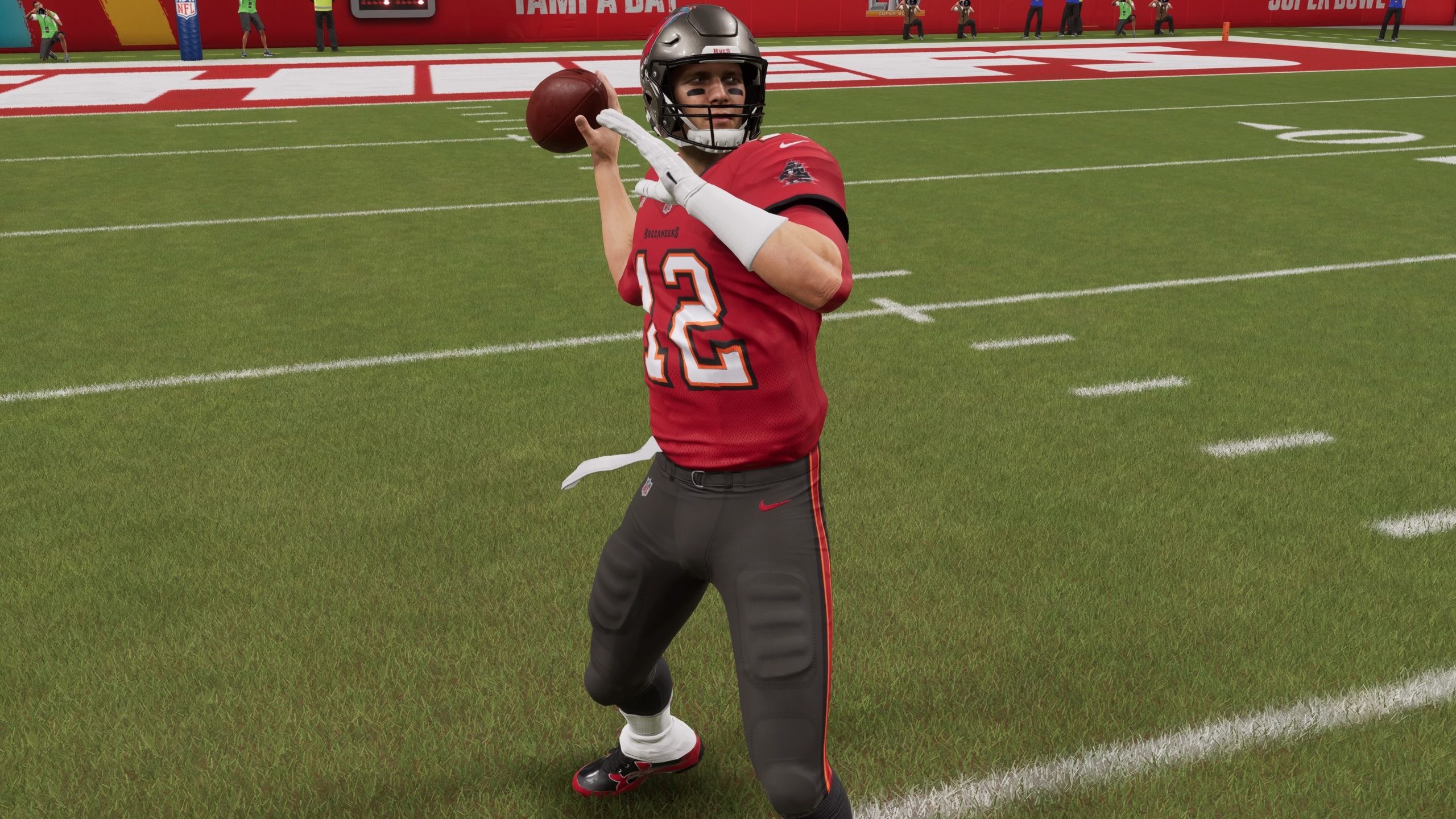 When will Tom Brady retire is just one of those questions that seemingly does not have a definitive answer. There are some gigantic questions that have been grappled with for ages now by experts and philosophers, and yet even the wisest sages are still unable to come up with any perfect answer to these great mysteries.

Who created the universe?

What is the meaning of life?

When will Tom Brady retire?

Yes, for anyone who may have been too bored by the inevitability of it all, Tom Brady won his seventh(!) Super Bowl ring last month when he led the Tampa Bay Buccaneers to a decisive victory in Tampa over the Kansas City Chiefs at the tender age of 43. The fact that the man (we’re sure he’s just a human still, right?) was able to accomplish the feat in just his first season with his new team after leaving New England only serves to underline the legendary quarterback’s greatness. While he may not be putting up quite the gaudy numbers that he was able to compile in his prime Randy Moss-Wes Welker years, it’s hard to argue with the fact that he’s still playing his position at an elite level despite being old enough to at least theoretically be a grandfather.

But that has to end sometime, right?

Well, maybe not as soon as we originally thought because he re-structured his deal and it seems like his age 44 season next year may only be his second to last one now.

So for the answer as to when exactly the GOAT will finally be put out to pasture, we decided to turn to a prognosticator: John Madden. After all, we have used some Madden simulation experiments many times in the past to determine the winners of Super Bowls and, while those results proved to be largely inconclusive (and pretty silly, we’re willing to admit), we thought we’d see if Madden fares a little better in predicting the end of Tom Brady’s career.

For this experiment, we will be using Madden 21 on PS5 and, considering there have been a series of upgrades to the game’s franchise mode, the expectation is that our results should be more realistic than ever. To get a fairly large sample size, we decided to simulate five separate franchises right up until to the end of the road for Brady to analyze the trends.

Let’s dissect some of the results we received from these highly scientific efforts:

When Will Tom Brady Retire? 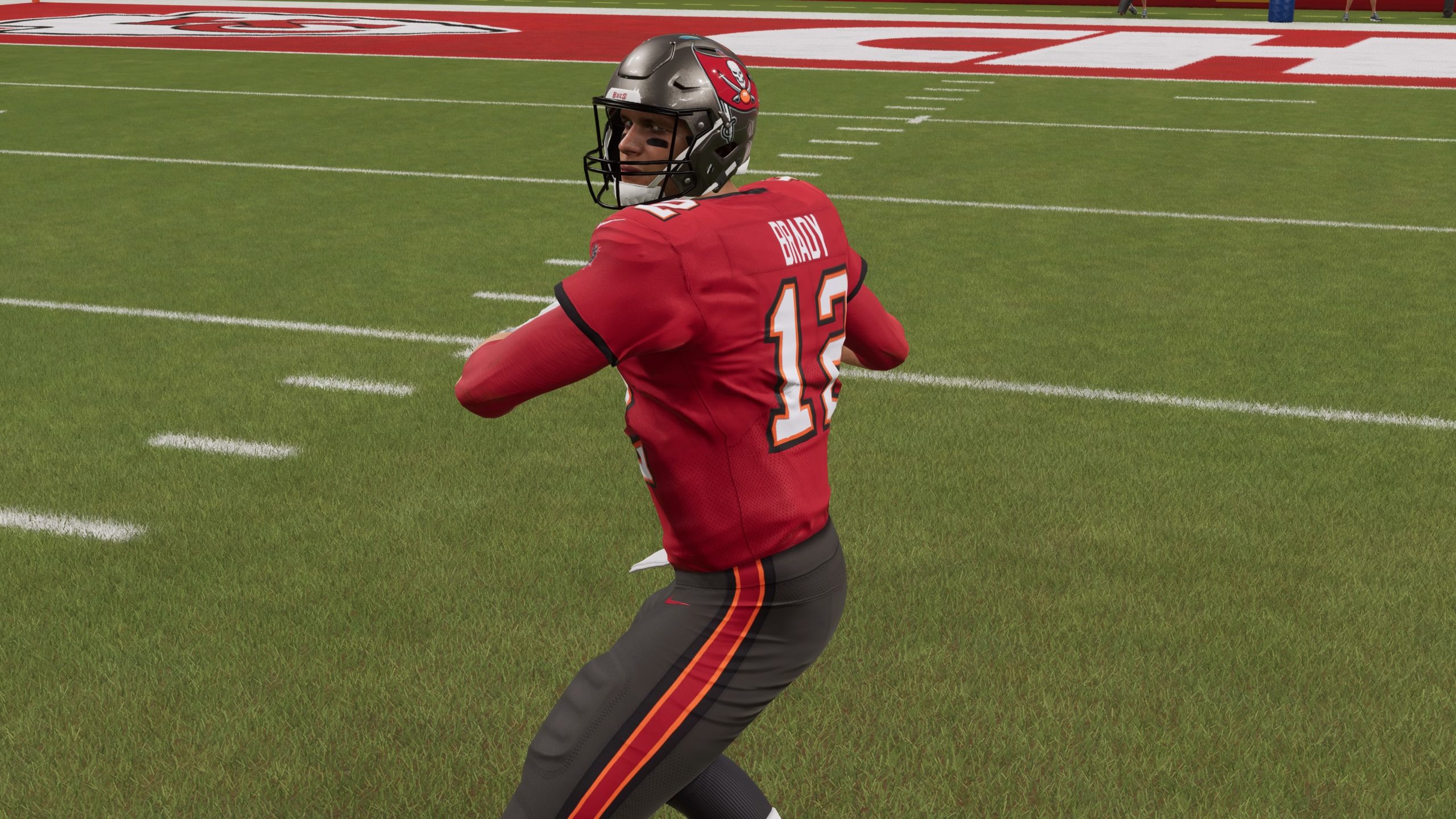 Tom Brady made it clear pretty much immediately after he won his most recent Super Bowl that he would be running it back for another season in Tampa. And who can blame the guy for wanting to do that given his immediate success there? It would be easy to think that Brady might be able to replicate his success after becoming better acquainted with the offense and the tendencies of his supporting cast.

Madden thinks differently. Over the five simulations, the Bucs averaged just 6.4 wins in the 2021 NFL season with Brady at the helm. In only one of the simulations did the Bucs even manage to make the playoffs following a 10-6 season, though that did not end in another Super Bowl celebration as the Bucs were horribly blown out by the Panthers 38-10 on Wild Card weekend. Things may have had a fairytale ending for Brady and his team in his first season with the Bucs, but Madden thinks there’s reason to believe his carriage might be about due to turn into a pumpkin. Could this be a similar situation to Brett Favre’s brief post-Packer rebirth in Minnesota where his first season nearly ended in glory but the following one was an absolute mess?

For his part, Brady’s numbers aren’t expected to dip all that much according to Madden. Even his overall rating doesn’t dip from the 89 it starts at. In some simulations, he even got better by the end of the campaign.

Here are Brady’s real stats from the 2020 season:

And here are the average numbers Madden sees Brady putting up in 2021:

As you can see, Brady looks like he might be throwing a little less than he was in 2020, but that probably makes some sense from a game-plan perspective when your quarterback is 44 years old. But there’s also an argument to be made that the slight decline in his numbers could at least be somewhat responsible for the projected lack of success in repeating as Super Bowl champions. Either way, it’s certainly enough to make Tampa think twice about wanting to bring back Brady at the age of 45 in 2022. 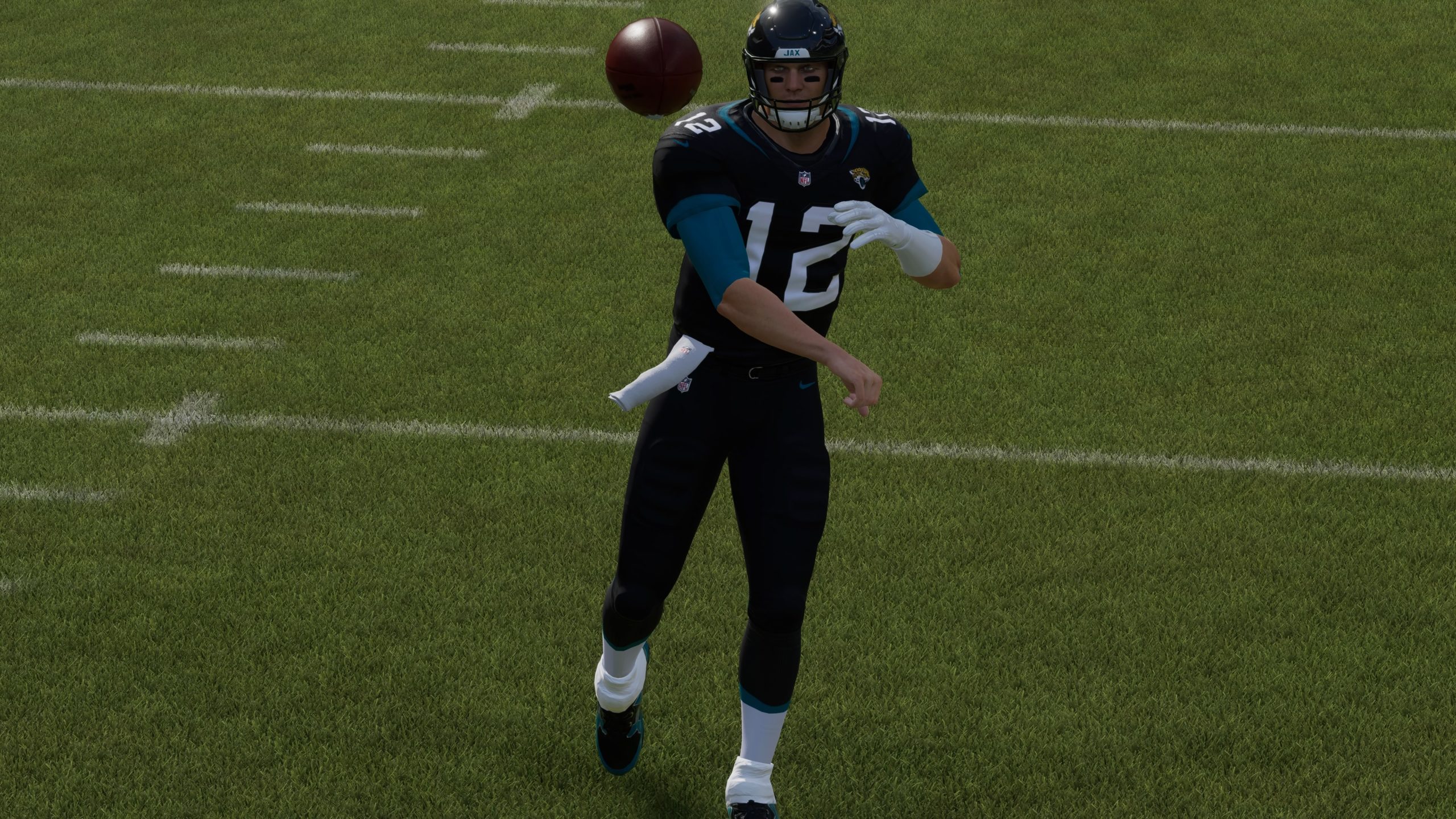 In all five of the simulations that were run, Tampa Bay decided to move on from Brady following the 2021 season (it should be noted that these simulations obviously can’t take into account the extension the Bucs/Brady worked out at the start of the off-season). In general, the Bucs decided to look to the future with a young gun under center who had recently been drafted (although in one simulation they decided to roll with the dice with Josh Rosen — it did not go well).

The writing’s on the wall, according to Madden. Brady’s overall rating dips to an average of 83 to start the 2022 season. Some might think that all of this would cause Brady to finally consider retirement, that maybe he had accomplished plenty in his long and illustrious career and that age 45 was a good time to dip out.

In all five of the simulations, Brady decided to ante up with another team and, perhaps even more surprisingly, these teams were actually interested in having a 45-year-old QB, albeit a highly decorated one, leading the offense. Regardless of where he ends up, Brady’s numbers continue to sag just a tad more in 2022. Here’s a look:

To make matters worse, Brady doesn’t win another Super Bowl no matter where he goes in 2022. But there are some interesting scenarios Madden sees potentially playing out at the end of his career.

By far, the saddest ending envisioned through Madden‘s crystal ball sees Brady hanging it all up after a mediocre 7-9 season in Jacksonville in which Brady only throws 25 touchdowns and misses the playoffs. Let’s hope that’s not the way it goes for him though and one of these more interesting final chapters happens instead. 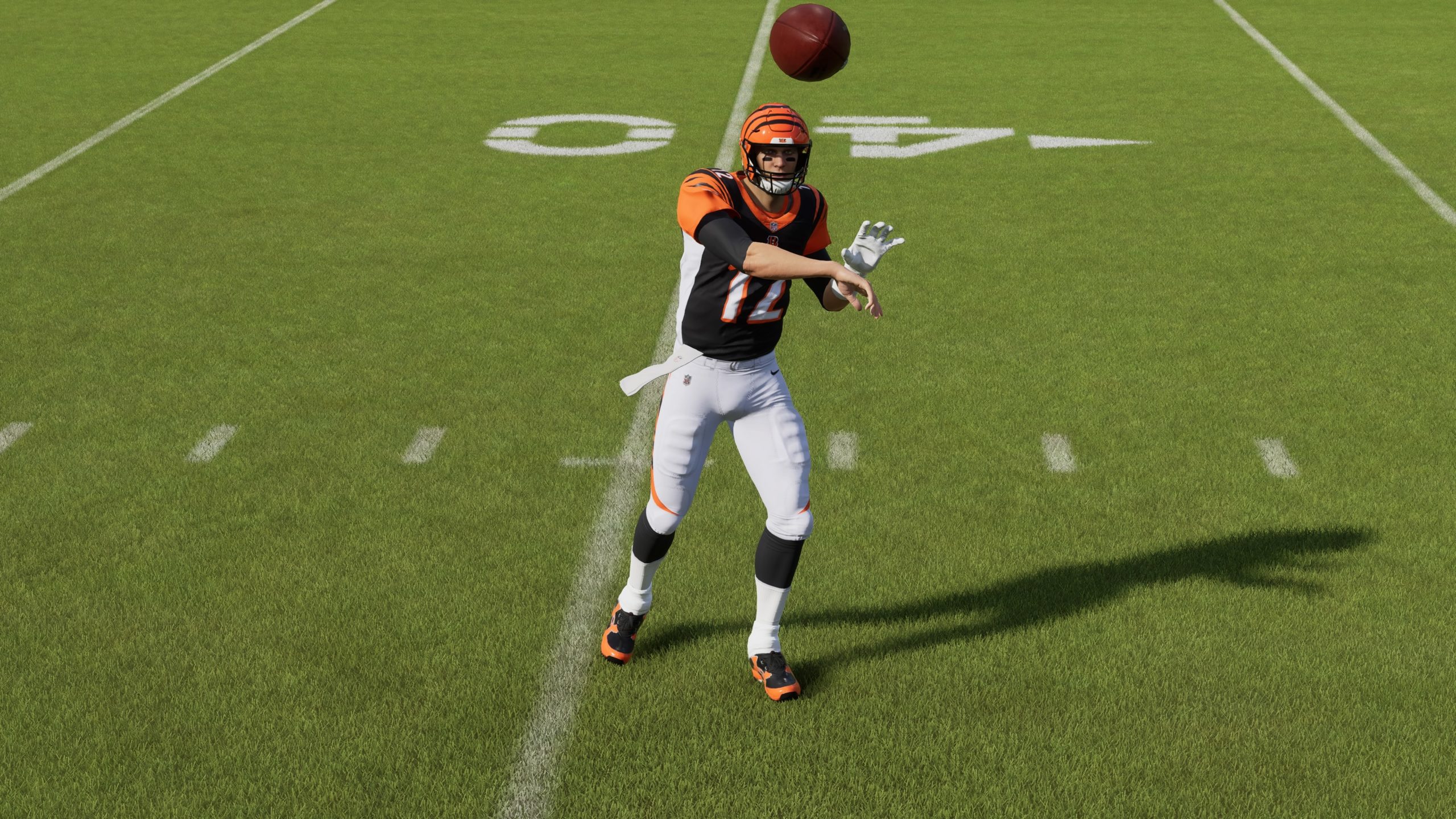 In three(!) of the five simulations, Brady plays the 2022 season in Cincinnati, with management apparently making the difficult and rather perplexing decision to bench Joe Burrow for the greatest quarterback of all time. This gamble doesn’t really seem to pay off in any of those three scenarios though, with the best-case scenario being a 9-7 season that ends in the divisional round of the playoffs with a 37-30 shootout loss to the Chiefs. To see Brady duel Mahomes one last time in a playoff game but come up just a little short would be a dignified way for Brady to ride off into the sunset. 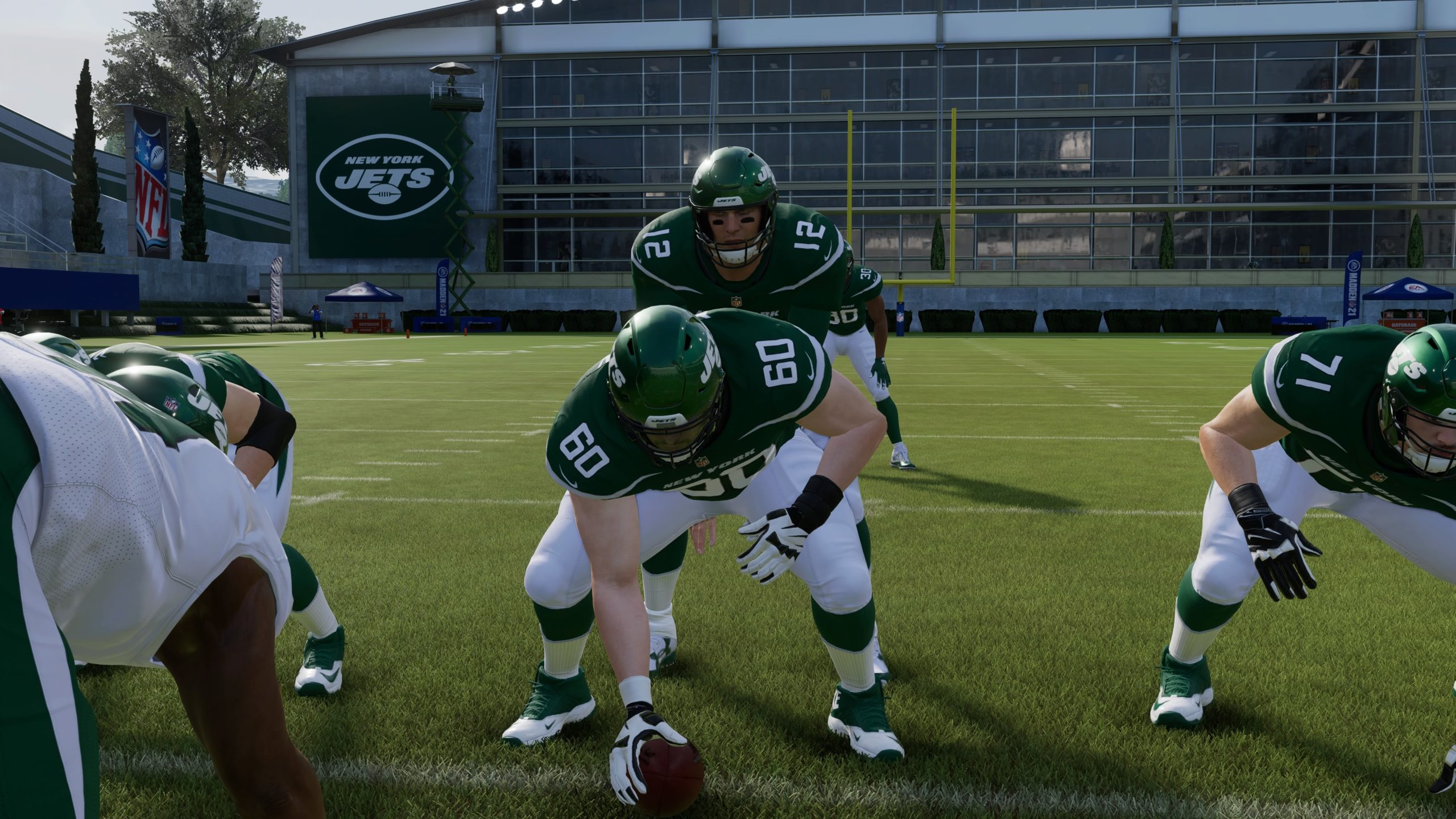 In what has to be unlikeliest of all the simulations, Brady signs on with his old division rival Jets for the 2022 season, and what’s even more of a shocker is that it actually doesn’t go too badly. Okay, so the team doesn’t exactly light the world on fire in the regular season, stumbling to an 8-8 record, but it proves to be enough to earn a Wild Card spot. Playoff Brady kicks in and he gets them past Wild Card Weekend and into the divisional round against the Raiders, but they fall just short here and lose 24-21. This would be another respectable way for Brady to go out, narrowly losing a playoff game that no one even expected him and the lowly Jets to even get to. 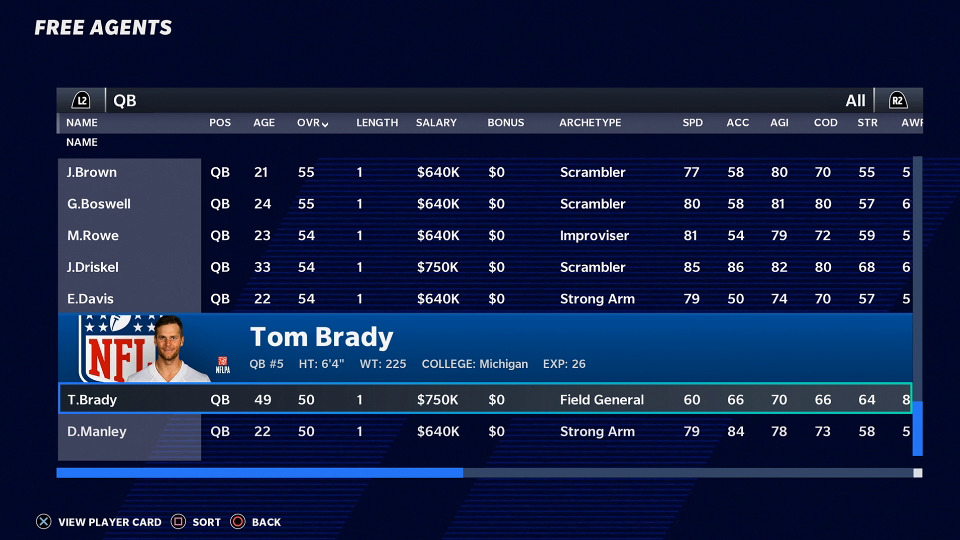 In four of the five simulations, Brady makes the difficult decision to retire following the 2022 season at the age of 45. The logic of this is pretty sound and Madden developers deserve some credit considering that Brady has said in the past that the age of 45 seems like a good number when he thinks of his retirement.

But in one simulation, Brady simply refused to retire.

Following the 2022 season, he was a 77 OVR and sat out the season as a free agent, fielding no offers from teams throughout 2023 and yet staying available — perhaps in case of injuries to quarterbacks around the league. However, the opportunity never comes for him.

At the age of 47 now and just a middling 68 OVR, Brady remained a free agent again throughout the 2024 season. No teams came calling again.

Now 48 and a putrid 59 OVR, Brady remains an available free agent. People are beginning to wonder if he’s okay, if everything is all right at home.

Even as a 50 OVR, with his age finally nearly mirroring his rating, Brady stays loose, tells media he’s “ready to go.” But there are no takers.

There was no announcement, no press conference. Brady’s name may have disappeared from the list of free agents, but that’s simply because his OVR rating was surely so low now that he didn’t even merit consideration from teams.

But he’s still out there somewhere, practicing, throwing, staying limber, waiting for his opportunity. And, you know, that might really be the most fitting non-ending for a warrior and ultimate competitor like Brady when all is said and done.

The guy may just never retire.

Madden 21 Free Agent Roster for Xbox, Courtesy Sazzy41
'Is Madden Share Down?' Question Cropping Up Far Too Much as of Late