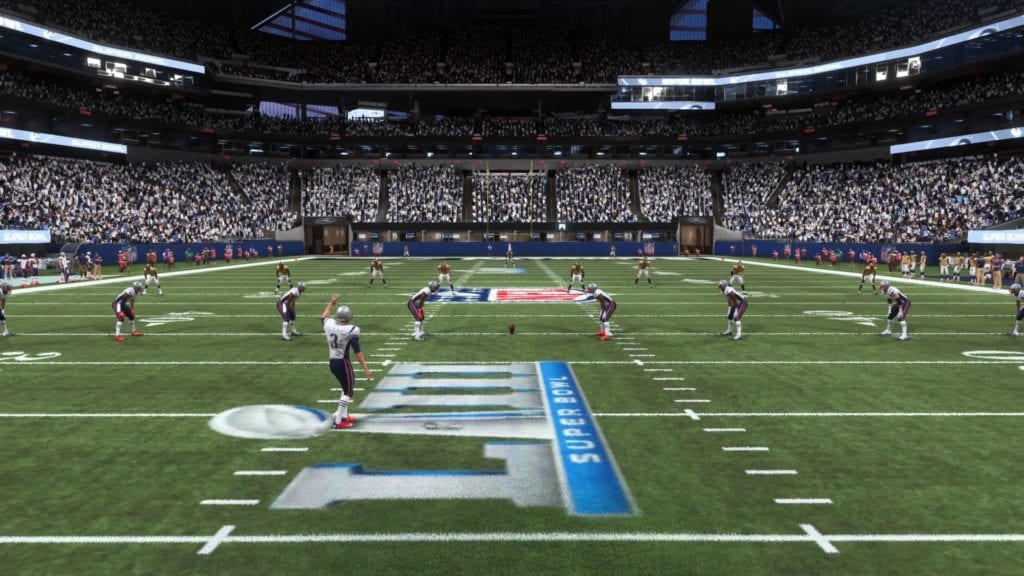 In the two weeks leading up to the Super Bowl every year, there’s plenty of time for the prognosticators to prognosticate and for every minute detail of the game to be analyzed to death by the so-called “experts.” Last year, we decided to jump into the fray ourselves by simulating Super Bowl LII ten times and learned that if they played the game that many times, each team would come out victorious in five of those. Were we able to predict the exact score in any of those ten games? Nope. In fact, exactly zero of our ten simulated Super Bowls saw the Eagles scoring more than 38 points. The closest we came was probably the 34-27 Eagles victory that at least had the margin of victory nearly correct.

So what about this year? Madden’s official Super Bowl prediction has the Patriots narrowly beating the Rams by a score of 38-31, but we thought we would channel the great football psychic Tony Romo and try once again to see if we can predict how this game might go by playing it out nine more times. So without further delay, let’s jump in and take a look at the outcomes.

Apparently, this is another Super Bowl like last year where the teams are so evenly matched that they would split the 10 games if they were to play each other that many times. In the interest of having a definitive answer, let’s go ahead then and do what we didn’t do last year: simulate the Super Bowl one more time to break that tie.

There we have it. The Patriots break the stalemate with a one-point win and would appear to have the slightest of edges going into the game Sunday. Let’s dig in now and have a closer look at some of these games. 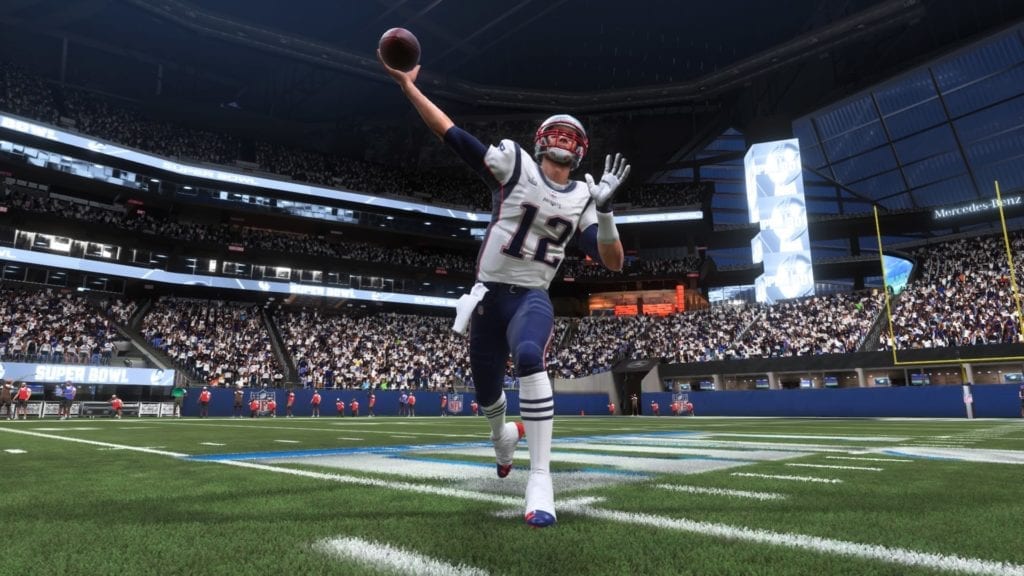 In a game with obvious echoes of Super Bowl L1 when Brady finished off the greatest comeback in playoff history against the Falcons by leading an overtime TD drive, the GOAT does it again by erasing a 17-3 halftime deficit and not allowing the Rams to touch the ball in OT. After the Patriots score 17 straight points in the fourth quarter, Jared Goff marches down the field and ties it with a 14-yard TD pass to Brandin Cooks. But Brady is undeterred; he takes the reins after winning the coin toss (team captain Matthew Slater calls heads yet again, obviously) and eventually finds Julian Edelman from seven yards out for the winner.

McVay Blows It By Getting Conservative

These two games finished with eerily similar endings that could foretell how things will play out in the final minutes on Sunday. In both, the Rams are forced to settle for a late field goal rather than punching the ball in for the TD, and Brady has just enough time to lead his offense down the field for a TD to win it. Will Sean McVay come under fire after the game for choosing to take the points from inside the five-yard line rather than trying to punch it in to cement the Super Bowl victory? Considering that’s exactly what happened in these two separate simulations (including one where the Rams had a fourth and goal at the one-yard line), it must now be considered a strong possibility if not an inevitability.

Rams Blow Out The Pats

The Rams may have only won five of the 11 simulations, but three of those five wins were by more than one score, and two of those wins were by 28-plus points. Judging by these results, it does seem like the Rams are more likely to win going away than the Pats, who have probably grown accustomed by now to playing in close Super Bowls. Though Rams fans may be hoping for one of these outcomes, impartial viewers just hoping for a good game are sure to be the ones most disappointed by any of these scenarios.

Greg The Leg For The Win

In a tight back-and-forth affair that seems destined to come down to the final possession, Jared Goff moves the ball down the field on a late drive just enough to get into marginal field goal position; Greg Zuerlein does the rest. He flips the script and conjures memories of Adam Vinatieri for Patriots fans everywhere when he nails a 53-yard field goal as time expires to give the Rams the championship. Zuerlein is named Super Bowl MVP, subsequently appears on every talk show imaginable and then sees his career flame out in a maelstrom of ego and hubris stemming from nailing the biggest kick of his life. 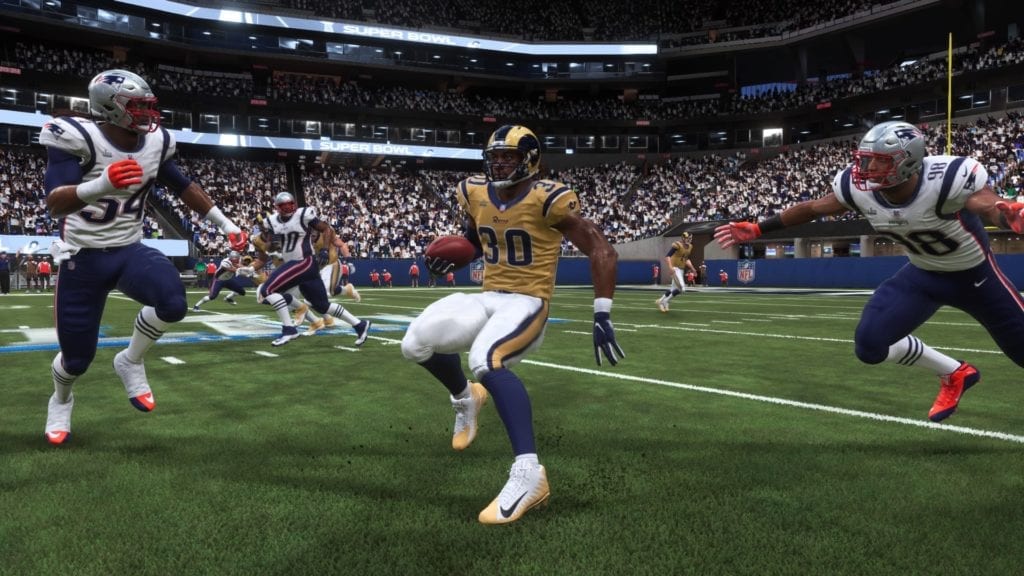 Let’s have a look at the average performances we can expect from some of the notable players talking the field Sunday.

There doesn’t seem to be too much of an expected discrepancy in the performances of the quarterbacks in this game despite all of the hoopla surrounding their difference in age. Goff is more likely to turn the ball over (probably due to his lack of experience in games of this magnitude) and Brady is more likely to carry his team on his back in terms of yardage, but the advantage either way is pretty negligible.

This might be the single biggest revelation from parsing through the stats of these simulations. Quite simply, Todd Gurley and the Rams offensive line seem poised to control this game on the ground, averaging five yards a clip and 120 yards a game. On the other hand, Sony Michel looks to be in for a rather long and frustrating day against this smothering Rams defense, which is probably why the simulations see Brady being forced to throw for more yards to compensate for the lack of a ground game. Other than these two backs, no one else is expected to be much of a factor, even a resurgent C.J. Anderson.

Not surprisingly, it appears the Patriots passing game will rely heavily on Julian Edelman, with the receiver setting a standard of over 100 yards receiving on average in these simulations. Other than Edelman and Chris Hogan, we can expect most Patriots receivers to be rather pedestrian, with Rob Gronkowski likely continuing to be a bigger factor in the run game than through the air, and reliable check-down option James White slated to only catch a couple balls out of the backfield.

It looks to be a little harder to know who will step up when it comes to the Rams receivers. Of course, Brandin Cooks might be the best bet for a breakout game against his old team but don’t sleep on tight end Gerald Everett. Sure, he only caught 33 passes this season for 330 yards, but these simulations would indicate he might be able to exploit some of the Patriots’ vulnerabilities over the middle. Rams fans would probably hope for a little more production from Todd Gurley than the three catches for 39 yards Gurley averaged over these simulations. 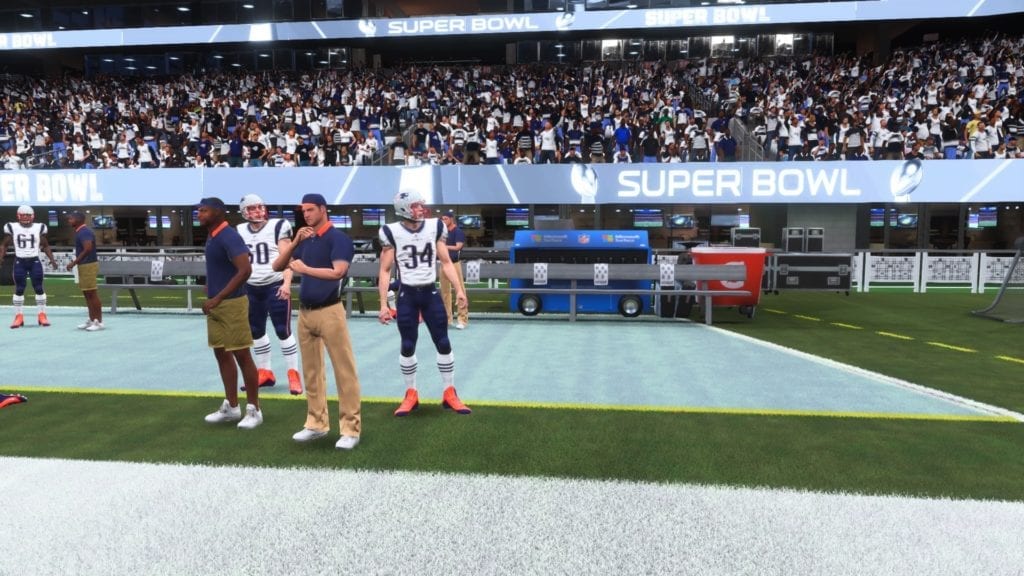 Here are some bets that are the most likely to be winners based on these Madden simulations:

The total score went under 56.5 points in seven of the 11 simulations, making it a clear favorite when it comes to this bet.

Rex Burkhead Under 14.5 Receiving Yards And Under 19.5 Rushing Yards

This should be easy money, considering not only did Rex Burkhead go under these rushing and receiving totals in every single one of these simulations, he didn’t even appear on the scoresheet in any of them. Madden simulation glitch or savvy premonition? You be the judge and render a verdict with your money.

In seven of the 11 simulations, Rams linebacker Littleton led all players in tackles, and in every single one of those games he had over 8.5 tackles.

As with last year, these simulations indicate that Super Bowl LIII is truly anyone’s game. Yes, the Patriots would win six of 11 games between these two teams, but the Rams hold a 319-286 advantage when it comes to total points scored over the 11 simulations, including a few blowout wins. So are these concrete predictions based on comprehensive scientific data or intensive studies of these teams’ strengths and weaknesses? Of course not. It’s just a silly attempt to make some sense out of this game, just as everyone else is trying to do leading up to the big moment. Perhaps this is the year one of these simulations ends up being accurate.