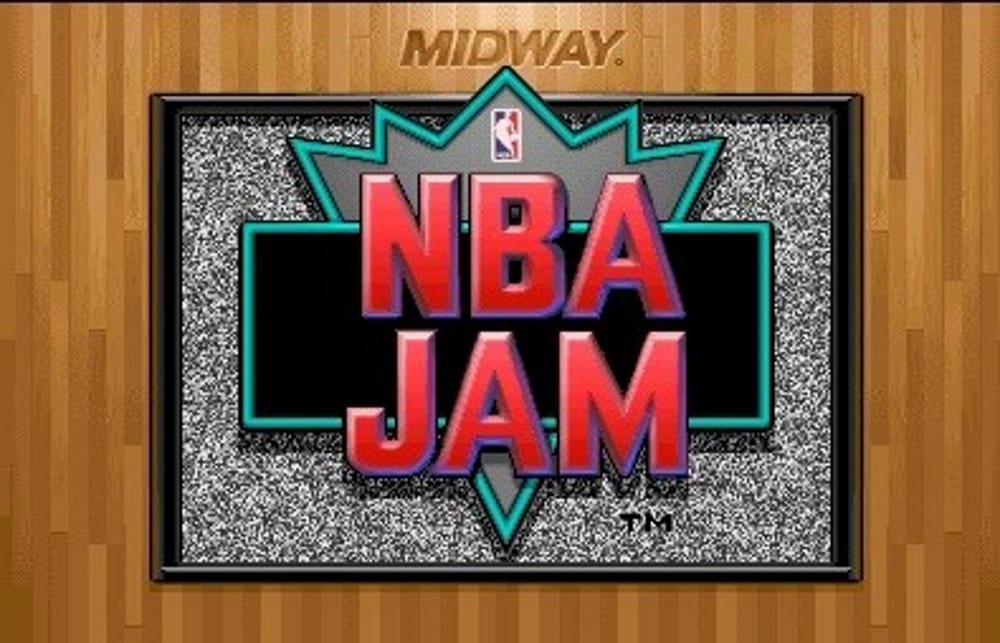 This week’s Throwback Thursday is heating up… MONSTER JAM! HE’S ON FIRE!

Midway is the unabashed hero of the Throwback Thursday crew. We are eternally grateful for their often understated impact on sports video games and pop culture altogether. NBA Jam gets its roots from Arch Rivals, a 1989 release that is one of Midway’s earliest forays into action sports. Arch Rivals put players in punch-filled, 2-on-2 basketball matches with no rules and unrealistic characteristics, a well-received concept that was just missing that extra little something.

In the early 1990s, Midway rekindled its desire to create another over-the-top basketball game. This time, however, it would be with the NBA license. Lead designer Mark Turmell noted that NBA Jam almost did not happen due to the NBA’s disinterest in its logo appearing in video game arcades. But after careful persistence, the NBA’s green light gave birth to 1993’s NBA Jam, a physics-defying arcade game that wolfed down quarters and became one of the most popular video games ever made.

Where do we even begin? NBA Jam’s 2-on-2 hectic gameplay is in a class all its own. Dunks were absurdly thrilling, threes were gorgeous and alley-oops put in-person contests into a different stratosphere. Steals were maddening, blocks were practically indistinguishable from goal tending and shoves that knocked opponents to the floor were strategic mechanisms instead of fouls.

NBA Jam was programmed to have close games. 15-point leads meant nothing and could evaporate before players could even comprehend what was happening. Making three shots in a row with the same player led to a seemingly can’t-miss “on fire” status that has burned itself into modern lexicon.

Licensing issues prevented certain players, most notably Michael Jordan, Shaquille O’Neal and Charles Barkley, from appearing in most versions of the game. Otherwise, rosters were limited but consisted of real players and teams. Players were given individual stats based on their abilities. Playing as Shawn Kemp felt demonstrably different than playing as John Starks.

A thumping soundtrack was the perfect match for Tim Kitzrow’s soon-to-be-iconic commentary. All of the classic catchphrases are in the original NBA Jam cabinet and became synonymous with in-your-face basketball action. As if we needed more, NBA Jam was littered with secret characters and cheats. There was simply something spectacular playing as the Fresh Prince himself and dunking on Scorpion from Mortal Kombat. The practically endless secrets, ease to pick up and play, and thrilling close games drew players back for more.

As with other arcade sports titles, the primary selling point and triumph of NBA Jam is its gameplay. Simulations are burdened with the essential responsibility to re-create real-life experience as accurately as hardware allows, and NBA Jam is a master class in teaching the art of fun over frills. The NBA 2K series has created a world-class digital replication of NBA basketball, but as with other sports, there is a glaring void left by the absence of extravagant arcade titles.

NBA Jam finally got the HD remaster that we all hoped for in 2010, but it was not until 2011’s On Fire Edition that the series really entered the 21st century. HD graphics, the same classic Jam gameplay, new in-game challenges, tons of unlockables and online play — as a $20 digital title no less. But after recapturing sports gamers’ hearts all over again, few were incentivized to continue to engage with the game, especially with a new console generation, the end of roster updates and the unparalleled depth of the NBA 2K series.

A formidable mobile version was released, but eventual lack of roster updates soured its freshness — the end of roster updates would be fine if another iteration of the game was released. However, at least Xbox One owners can play the 360 version via backwards compatibility. The On Fire Edition still makes for excellent couch co-op, especially teaming up in World Tour mode to unlock the game’s hordes of secret characters and cheats. But if there is no future NBA Jam in sight, what would it hurt to swap a few players around and get the game prepped for the fresh NBA season?

Which brings us to the question we find ourselves asking seemingly every week: what is preventing this from being released as-is for the current console generation?

Thankfully, one of the greatest basketball games of all-time came at one of the most exciting eras in NBA history. Practically every team has a legend on it, and there is plenty for both casual NBA fans and casual sports gamers to get excited about.

All Operation Sports readers almost certainly own or have owned a port of NBA Jam somewhere down the line. However, there is something to be said for the thrill of playing it on an original arcade machine with a crowd around you. While the various home ports were excellent, none were direct replicas of the arcade’s graphics, sound and experience. Luckily, for those of legal age, it is a staple of just about any barcade in the United States.