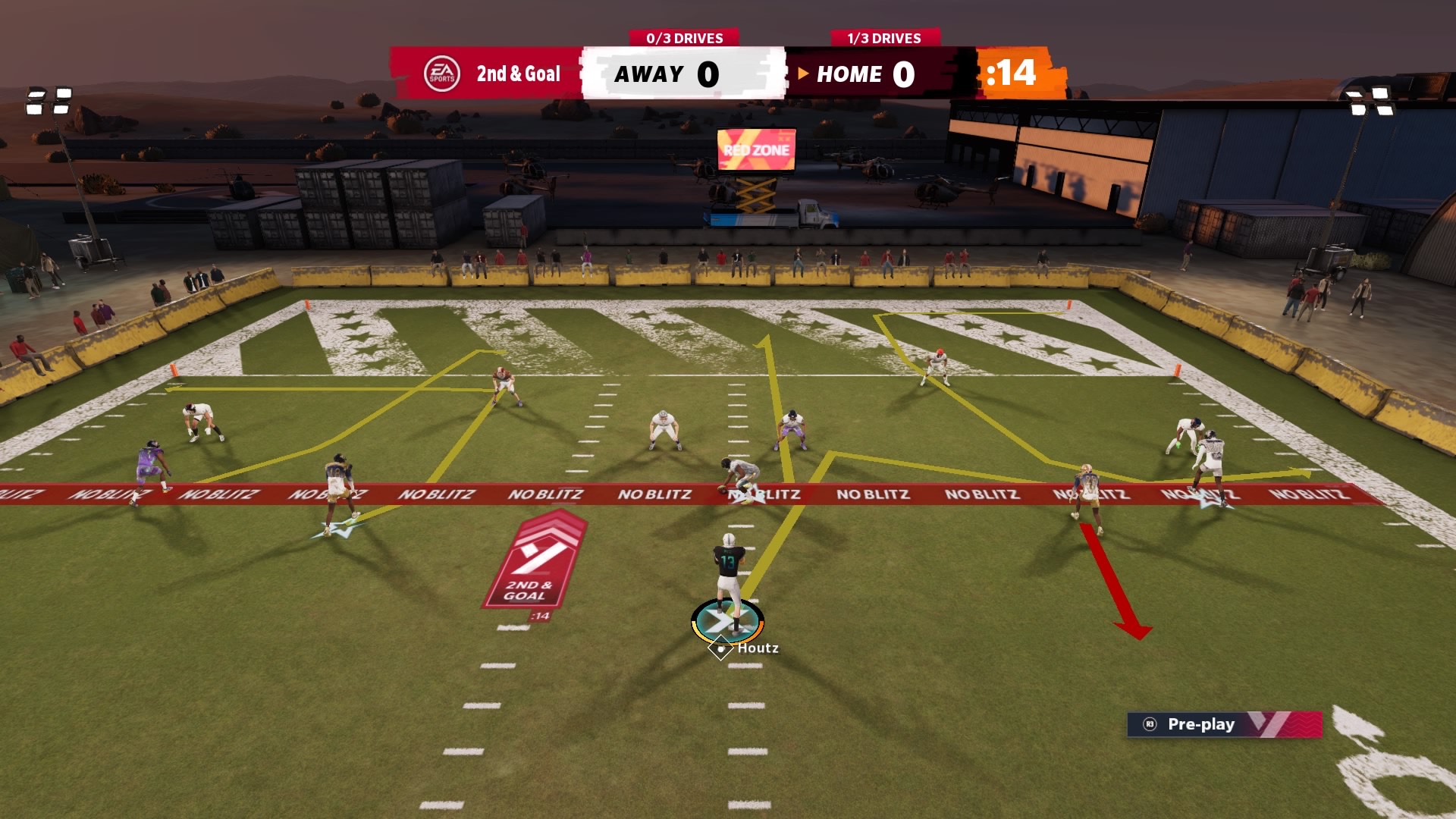 Shortly after EA took heat for not addressing critical issues with Classic Franchise mode, the Madden development team announced a new game mode, The Yard. This raised eyebrows for the plethora of people pleading for updates to franchise mode, but The Yard does not deserve to be cast aside simply due to general anger about the state of another mode. It still deserves its own fair shake, and that’s why I decided to just focus on The Yard in Madden 21.

Oh, and for those familiar with FIFA’s Volta game mode, you may have an idea of where this is headed.

The Yard features 6-on-6 football and plays more like a modern-day NFL Street reboot, which is not a bad thing.

Here are my early impressions of Madden 21’s newest game mode, The Yard.

Why Have We Not Been Graced With More Stuff Like This?

A lot of us read the Gridiron Notes and probably watched a few YouTube personalities break down the latest game mode. But when you look at the concept behind EA’s new addition to the Madden series, there’s nothing on the surface that makes it an over-the-top idea. However, this also makes me wonder why we’ve seen very few things like it over the last three decades of sports gaming.

After all, all that matters is if the game is fun and entertaining. Otherwise, there’s no reason to continue. That is where I must tip my hat to the developers because The Yard is fun.

Now, I readily admit I might still be in the the honeymoon phase with the mode, but what if I’m not?

Maybe I’m a bit biased because I’ve always held a special place in my heart for NFL Street, but that also means The Yard is having the intended effect, which seems good. A modern-day version of one of the best arcade NFL games ever created seems like a good lane to be in for a sports game. And after playing countless hours with this new game mode so far, on the surface it appears to be a suitable replacement for EA’s deceased arcade franchise.

There’s not a whole lot that sports video video games can do nowadays to redefine what we’ve become used to, so while The Yard isn’t a groundbreaking new game mode, it is something new to the Madden franchise. This is a good thing. 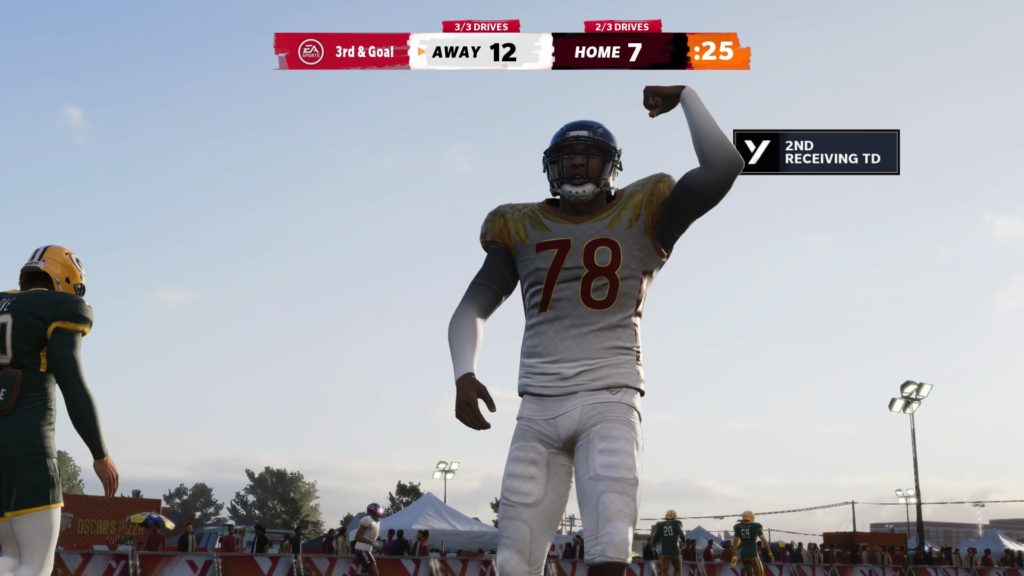 I know EA will release a patch shortly after the game is released (and now EA has done just that). And as we’ve seen in previous Maddens, sometimes that’s not always for the better. I can remember a handful of times that I enjoyed the gameplay, speed, etc of Madden — right before the development team made changes that affected the overall game.

So, for now, I’m enjoying Madden 21’s gameplay. How that pertains to The Yard is simple: the gameplay is fantastic here as well. As I mentioned above, it’s a modern-day version of NFL Street. It’s 6 vs. 6 and allows gamers to do something a lot different than they do during an exhibition game of Madden.

The possibilities with the gameplay also feel much more limitless. It’s only a matter of time before more arenas and challenges are added, but that would not matter if The Yard did not feel unique and interesting snap to snap. Players can do things like throw the ball as often as they’d like behind the line of scrimmage, and rack up extra points in doing so.

Fortunately, it also does not seem like there will be some overpowered play that instantly shifts the game. Instead, players earn points for doubles passes, interceptions, fumbles and several other factors.

I’ll also end this section by saying nothing, and I do mean nothing, has been more rewarding in any recent Madden game for me than winning a game on a last-second touchdown pass to my center, Laremy Tunsil.

I’ve played a ton of EA games throughout my lifetime, and I very rarely have had connection issues when competing online — unless you consider the early days at my parent’s house using their dial-up internet, then maybe there was an issue. That has not changed here as EA’s servers are responsive, and I was connected with my opponent quickly during the “early access” window.

My biggest gripe with online play early on was just the initial matchmaking. I was paired up against a guy that must’ve been playing this game for months in early development. Why do I think this you might ask? He was rocking the sexy Stealthbite jerseys, and he was doing things I had only seen in the trailers.

But so what, I lost 17-8. I could have played better, but for my first game online versus a veteran of The Yard, I wasn’t upset. I played a host of other games after that were fun and competitive, so the matchmaking irregularity in my first game was probably just due to the early access player pool being smaller. All in all, the single-user component of this works well for me.

However, part of what intrigued me most about The Yard was the ability to team up with five of my friends and play head-to-head vs. another squad of six.

This year’s game unfortunately does not have 6-on-6 multiplayer. Instead, you can play 3 vs. 3, and players can change into any of the other three characters on a given play.

Overall, I wanted more from my multi-user experience here. Games were often smooth, but the gameplay could get choppy at times and players would drop like flies. While it’s not a unique problem for The Yard, it feels like playing with randoms will be a bit of a mess, so you’ll want to try and find a group to play with if you play in multi-user games.

In general, online play is a work in progress, but in the longer term it will be the heart and soul of The Yard. This is part of the reason why I wish it felt easier to bond with and believe in randoms you connect with for games. 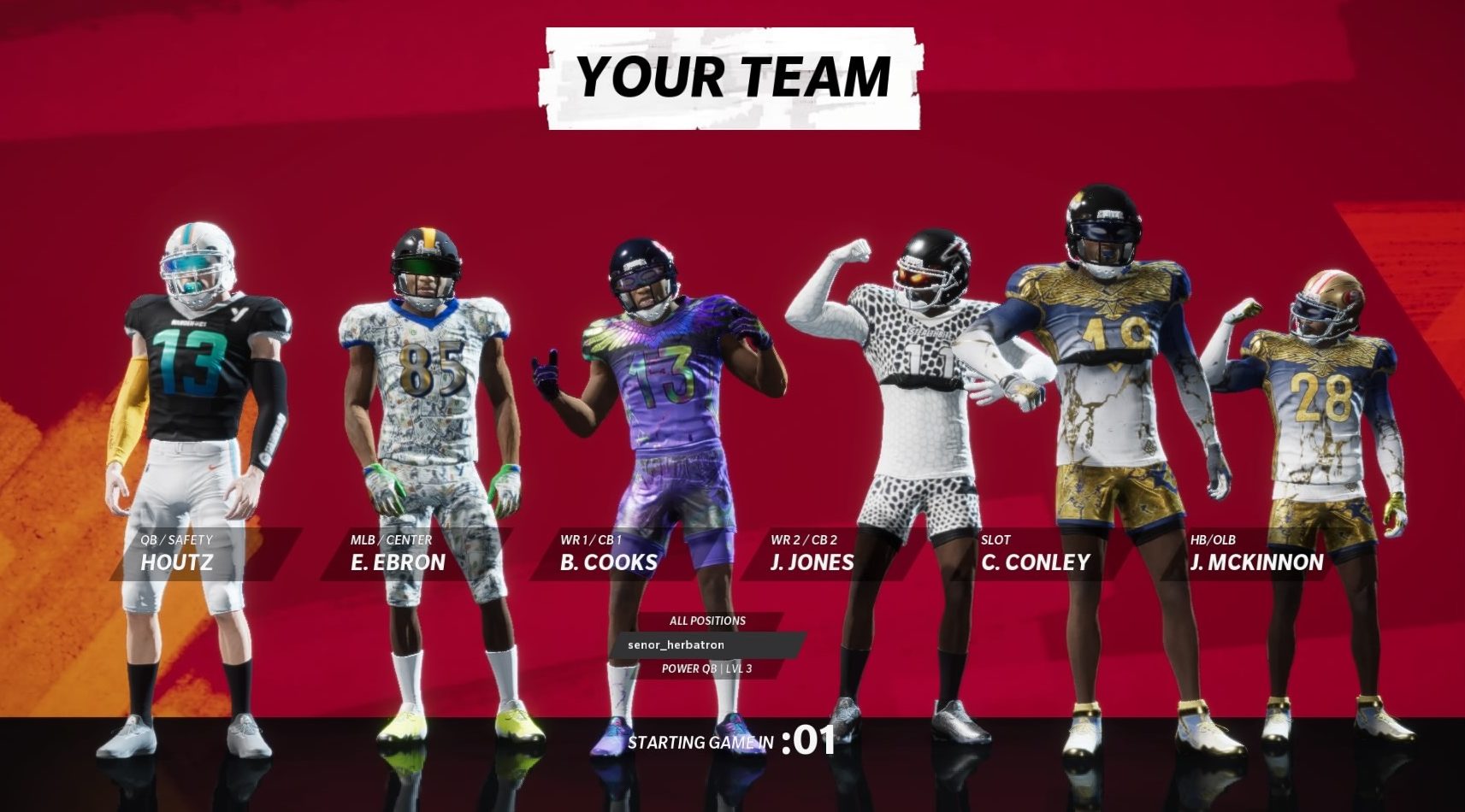 Where Are My Replays?

As I mentioned above, the gameplay is one of my favorite things about The Yard. And when you pull off some razzle-dazzle touchdown, the first thing you’d hope to do is pause the game and check out the replay.

Unless there’s some Da Vinci Code puzzle I must crack before unlocking this secret feature, there is no option for this right now. Yes, I can manually capture the latest video clip on both PS4 and Xbox One, but sometimes you like to watch the replay over and over from a variety of different angles.

One of the most noticeable flaws I’ve personally experienced pertains to the screen you see after completing or failing a challenge. Each time I would complete a solo challenge, a “failed challenge” menu would appear. The game would progress appropriately, but it took me by surprise. If you receive a failed challenge screen when completing a task, that must mean a “completed challenge” screen appears when you fail. Yes, this is true.

And then there’s the invisible player bug that we’ve seen scattered throughout some various videos. Although this has only happened to me once, it’s still an issue you would hope to avoid at all costs. A lot of these bugs are going to be patched out day one or most likely be fixed soon after, but it just seems like a lot of these small issues should have been caught during the beta stage of things. 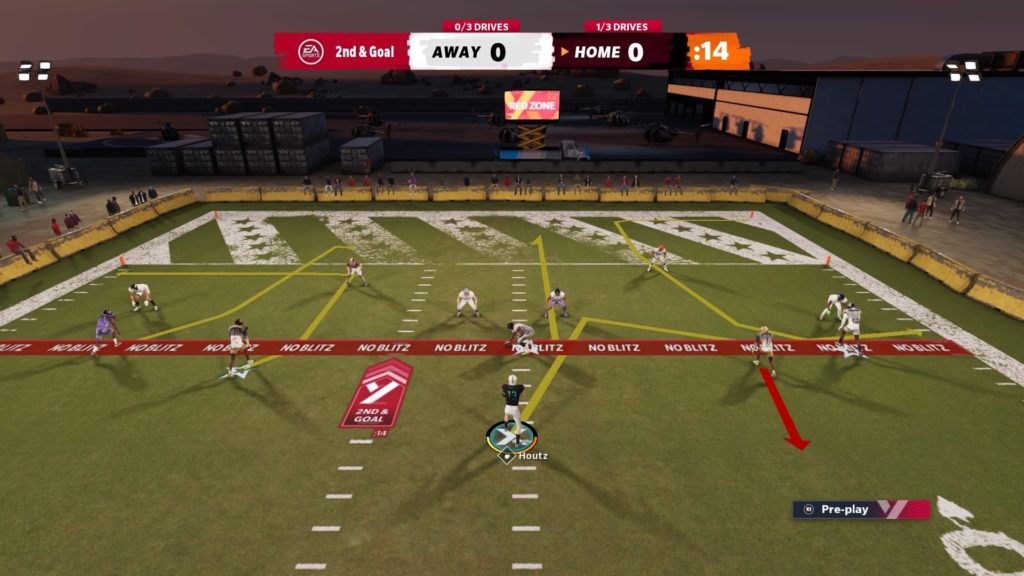 This is only the first year of EA’s vision for its newest game mode. I’ve only played it now for a couple days, but I truly believe The Yard could become EA’s most successful game mode since Madden Ultimate Team.

It’s not perfect and will benefit from the addition of more customization options, the inevitable face scan, and a user 6-on-6 option in the future. But for now, it’s the perfect way for Madden to show off glimpses of what the future might look like.

Madden Ultimate Team isn’t for everyone, and we know the gripes currently with franchise mode. On top of that, Face of the Franchise still does not quite hit the mark this year, so The Yard is perhaps the mode right now that has the most momentum behind it as we head into next-gen and next year.

In short, The Yard might only be the rookie QB hoping to get a chance in 2020 right now. But if my early impressions are any indication — and EA can build upon The Yard’s core gameplay — I don’t see any reason why it can’t be a long-term starting QB for the foreseeable future.

Madden 21 Review: Execution Not Power Is The Problem Here
EA Targeting Madden NFL 21 Title Update #3 To Arrive on September 10 - Here Are The Details