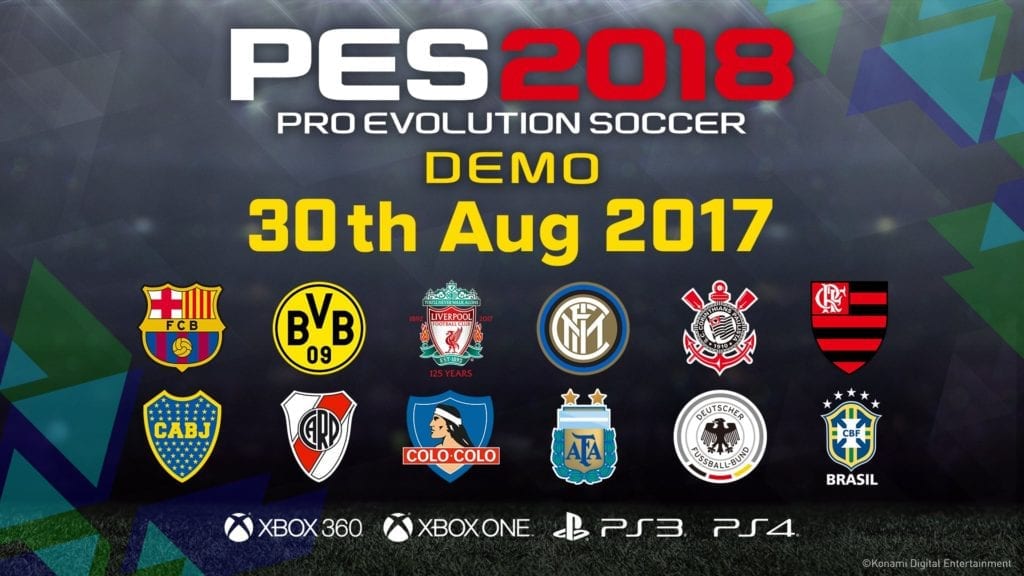 Fresh off a successful beta and positive hype from Gamescom 2017, the folks over at Konami have released an updated build of PES 2018 for our gaming enjoyment. With no further delay, let’s dive right in. Dribbling – Dribbling is finally fun again. Yes, it might be a tad overpowered at times, but the responsiveness you feel when you have the ball at your feet with guys like Neymar is a revelation compared to prior versions of PES. Reliance on skills or tricks isn’t even required this year as quick flicks of the left stick coupled with a few acute taps of the sprint button can leave defenders flat footed. In a sport where 1-on-1 matchups out wide often make or break matches, it’s nice to not only put your defender on the back foot but to feel the anxiousness of trying to defend in these situations. In general, it feels as if Konami spent the majority of this development cycle enhancing the “on-the-ball” aspect of PES 2018.

Free Kick Controls – In the rare instances that you are fouled (more on this later) in the opposition’s half, it’s great to see that the corner kick instructions (dash, near post, etc.) have carried over to free kicks. For too long free kicks were stagnant resulting in instances where only one attacker would make a run. Not only is this cleaned up in attack, but defensively it puts you under the gun as you now have to decide whether to man up or keep a high line in an attempt to draw the opposition offside.

AI Is Dangerous On The Ball – For years, players such as Messi and Neymar were “just another guy” when controlled by the CPU. Far too easy to dispossess, these megastars were easily taken out of the game and a mere shell of themselves. In the demo (mainly on Superstar level though), these players are finally as lethal as they are in real life. Equipped with more freedom on the ball and an arsenal of tricks whose animations play out quicker, you are forced to defend them as you would in real life. No more diving in with reckless abandon with expectations of winning the ball 99 percent of the time.

The Pace Of The Game – Trying to condense a 90-minute match into 10 minutes (the maximum time allowed for the demo) is always tough and often fosters a frantic style of play. Thankfully Konami has done a fairly decent job at replicating the highs and lulls of a match. Some of this can be attributed to the new walk/jog/run animations while other areas such as CPU AI intelligence in cutting off passing lanes helps to force human players to rethink their passing options.

New Stat Overlays – A nice new addition, the new stat overlays which pop up during play stoppages are a nice addition and speak to Konami’s commitment to overhauling what’s been a historically lackluster presentation. Passing stats, distance traveled and possession stats are just a few of the on-screen stats that I have seen pop up during my matches. I am excited to see if this carries over to Master League with perhaps an interactive league table and/or goal leaders.

Animations – The game animates better than ever. While FIFA still might have more animations in its arsenal, PES 2018 does a great job at having the correct animation play out at the right time. This isn’t limited to outfield players either, keepers react much quicker and in a more natural way, albeit there are still some instances where they dive backwards to stop a shot. Animations also feel better when it comes to replicating the physicality of a match. Perhaps the beta included more “back-to-goal” players, but the new shielding animation, when triggered, is still a beautiful sight to behold. Shooting and passing, especially the new outside-of-the-boot passes, look more realistic and have greater variety.

Default Pass Assistance (PA1) – To be frank, it’s still too assisted. Now at the highest level in the sport professionals should be able to pass the ball well, but with the abundance of space (more on this later) the reward far outweighs the risk. Coupled with a zoomed out default camera where you can see more of the pitch, it’s far too easy to pick out the perfect option every time. As a result of pass assistance being too high, it’s too easy to bypass the midfield and quickly advance the ball up the pitch. Defenses don’t get a chance to setup before they’re ripped apart by quick 1-2’s and killer through balls. First touches are also too precise as a result of perfectly weighted and executed passes.

Space – Space is ever-present in the PES 2018 demo. Some of this can attributed to the locked tactics (formations and certain instructions), a strange move by Konami that backfired, but there’s simply too much of it. Perhaps the larger field size doesn’t help when coupled with the odd tactical setup, but one thing’s for certain, too much space results in an up-and-down contest bypassing those midfield battles we crave as sim enthusiasts. Whether or not this can be remedied by tactical acumen is yet to be seen, but it’s a little disheartening to see one of PES 2017’s biggest issues still prevalent in 2018.

Tactics – Mentioned briefly earlier, formations and instructions are locked in an attempt by Konami to force you to play with these clubs/national sides according to their suggestion. This odd choice really limits one of the best attributes of PES, tactics that actually affect the outcome of a match. In the demo, if you’re losing and you want to pull a midfielder or defender for an extra forward, you cannot manually place that forward where you want. What results is teams like Argentina playing wide-open matches due to their four attackers and two midfielders. For the past few years, PES has been tactically rigid with an “all or nothing” reliance on a style as opposed to letting the match play out and adjusting accordingly, and with this demo it’s more of the same. Dortmund will strictly rely on long balls to its attackers instead of a more patient attempt at building the play if the long ball passing lanes are cut off.

CPU AI Awareness – Even on the highest difficulty levels, the CPU has a tendency to act bipolar when it comes to closing down. Whether this can be attributed to an overall lack of aggressiveness by the AI (lack of fouls is a result of this) or shoddy programming, there are too many instances where you can waltz through the defense as they back off, allowing you to advance close to their 18-yard box. It’s as if your defenders go full Gary Cahill at times (as a Chelsea fan I can attest that you NEVER go full Gary Cahill) and forget to step up. There are also strange moments when your AI teammates will run away from a ball that is closer to them than the intended passing recipient. This happens more frequently on no-assistance passing (think manual in FIFA) but nonetheless is annoying and can lead to a quick turnover.

Positioning – Overall positioning is slightly improved on goal kicks and high-attacking levels, but the demo still struggles with some of the same issues that plagued PES 2017. In this era of wingback and high defensive lines, it’s a little annoying to see your center backs still behind the halfway line despite you increasing your attacking level (pressing up on the D-pad). Conversely, wingbacks — all the rage now — are constantly pushed far up-field resulting in one of your midfielders dropping back and offering support to your center backs even when it’s not needed. What results (and some of this can be attributed to poor tactical implementation, aka “Attacking Wingbacks” in “Advanced Instructions”) is often a case of three defenders (both center backs and a midfielder) marking one attacker (ST/CF). This rarely happens in real life as most managers will instruct their center backs to split the field and keep the opposing striker in between them as a way of marking them.

Fouls – Non-existent in PES 2015 and 16, fouls were somewhat fixed last year in the full release. Master League, especially rivalry matches, saw an acceptable amount of fouls from box-to-box. So far in my demo travels, they’ve been hit or miss. Fouls for the most part are called when they occur, but with CPU aggressiveness nerfed they are the rarity. I can count on one hand the number of free kicks near the box I’ve taken in PES 2018.

Tactics – Konami has introduced a lot of new tactics over the years. Advanced Instructions and Fluid Formations are just two of them, but at times it feels like they are at odds with each other. Fix one thing and a new can of worms opens up. Unfortunately due to the demo locking certain tactics, we’re unable to tinker with them as we try to solve some of the game’s issues with spacing and positioning.

Post-Support Release – Konami is no stranger to gameplay patches. As often is the case these days with sports games, a day one patch is most likely in the works attempting to fix issues, implement modes and/or update rosters. The last few PES editions have repeated this process only to see Konami list their vague one-liner “and other gameplay tweaks that will enhance the user experience…” This nondescript line usually leads to players having to “feel” the differences instead of being told what was precisely tweaked/changed/updated (think patch notes). Hopefully Konami is taking all the feedback they’ve received thus far and making the necessary tweaks to the fundamentals of the game (passing, fouls, etc.) while leaving the more complicated areas (tactics) to a larger development off-cycle.

Overall, this demo is a mixed bag. While the improvements can be felt instantaneously, it’s a little disheartening to see some of the same issues that plagued PES 2017 rear their ugly head again. Perhaps the excitement over the beta releasing early combined with the largely player vs. player experience covered up some of these AI flaws. When it’s all said and done though, PES 2018 still has the makings of a good game, and with the right tweak(s) here and there this could be the footy game we all want and desire.

How’s your experience with the demo going?

PES 2018 Demo Available Now, Post Your Impressions Here
Start PES 2018 Off In Style With an Option File from PES Universe