As the clocks in the United States have sprung forward, it’s time to take a look at our once-favorite niche soccer game PES and start the conversation around what areas could use some improvement.

It’s no secret that PES has lost some of its luster over the years, but there’s still hope for the once-great franchise. With that said, I’m going to look at three areas PES could improve.

Many of us, including myself, are living in the past when it comes to PES. Nostalgia is a powerful emotion and one that is hard to shake when it comes to the PES franchise, but at times it’s necessary to reflect on past successes when trying to move forward. Tactics, editing capabilities and player attributes are three examples of areas that could improve by taking a look at the past.

Underneath the surface, tactics have become increasingly complex. In PES 2018 configuring a team’s tactical setup is often an exercise in frustration. In order to get your players to act in your desired manner, it takes a combination of tweaks and possibly player attributes to offset deeply programmed behaviors.

Stripping back the layers by focusing on the basics would help to create a better tactical setup, one in which you could get your club to play in your preferred manner.

Player attributes have conversely been minimized by combining stats that used to generate the kind of player individuality that once set the PES franchise apart from all others. Stats such as “Teamwork” and “Trust” used to help your individual players adjust to new teammates/formations and have now been replaced by Team Chemistry.

On the surface, it seems like a small change but in reality it means no longer searching for players with high teamwork stats that can assimilate into your squad as quickly as possible.

Another strange omission over the last few years has been the “Technique” stat. It’s no surprise that once this stat was removed, combined shot accuracy immediately suffered. With shot accuracy nerfed, the feeling of elation that PES goals once delivered has quickly faded, resulting in a feeling that most PES goals these days are cheap.

Ever since the switch to the Fox Engine in PES 2014, gameplay has suffered. Whether it’s a result of less stats, the overly complicated and often conflicted tactical system, or strange AI coding, PES has lost its soul. Sometimes it’s necessary to tear down the foundation and start fresh. Perhaps it’s time for PES to adopt this approach.

PES is a niche community with a very loyal following. Many of us have pumped hours into the game editing it to create a more realistic experience. Fighting an uphill battle when it comes to licenses puts PES in a precarious situation, but it’s time to lean on the community that has helped to make your game great in the past.

In order to do this though, you need to give the community the tools necessary to improve the game.

More editing slots, global editors, and an online in-game upload feature would immediately take the game to the next level. Take the UEFA Champions League license for example. From an implementation standpoint, it’s done relatively well. All matches are played at night, the anthem is blasted before matches, and the draws for the groups/stages are present.

However, one thing that’s not present is a way to make all teams that are represented in at least the group stage — that’s unacceptable.

Even if that means negotiating one-year deal with some of the minnows that fill out the group stages so we have more slots available to make the other teams, it should not be up to editors to spend hours creating the authenticity required to replicate the full Champions League experience — only to not have the space to finish the job.

From a gameplay perspective, Konami could improve greatly in this area. Currently the company is fairly active on Twitter and do send out surveys from time-to-time, but it’s anyone’s guess what actually is addressed in the sporadic gameplay patches. Look, we understand that feedback is tough to comb through and apply, but what you’re getting in this day and age of social media is free market research.

YouTube, forums and Twitter all provide varying degrees of feedback aimed at improving the game and/or pointing out bugs.

Konami seems determined to push the game out as it sees fit, ignoring a large portion of community feedback in favor of an original vision. What’s resulted has been a stale Master League, few tangible gameplay improvements, and a second-rate attempt at mimicking FIFA’s Ultimate Team and Pro Clubs. 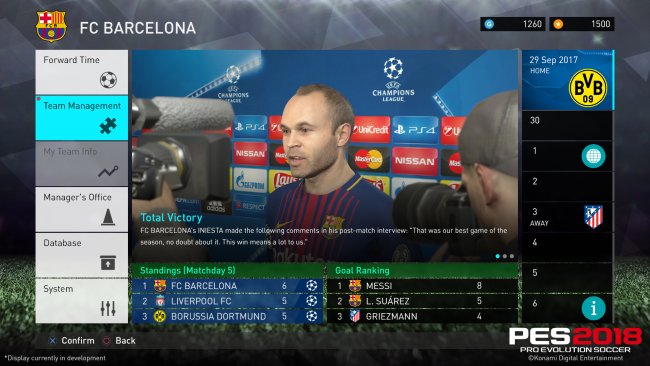 Fire up PES 2018 and you’ll see there are no shortage of game modes. There’s Exhibition, MyClub and Master League to name a few. Most, if not all of these modes can be found in their competitor’s game, FIFA, of course with a few differences here and there. Beating EA at what they currently do well (FIFA Ultimate Team) isn’t realistic.

Between the large amount of players who partake in the mode or the revenue it generates, there is no real chance of PES’ MyClub stealing gamers away from FIFA. One mode that doesn’t exist in either is an online Master League. Look, we all know that Master League has its issues, and before taking it online it would behoove Konami to address those issues, but the potential for a groundbreaking mode is there.

Actually competing against your buddies for a player in the transfer window, knocking them down a league through relegation, or just beating them head to head would provide endless hours of excitement. Logistically, it would be difficult to figure out certain areas such as schedules and using option files online, but with some thought I believe these issues could be solved.

If EA Sports was able to accomplish this back in 2009 with their Online Dynasty, there is no reason to think that it couldn’t be duplicated in 2018 by Konami.

The list of ideas Konami could use to improve the PES series is probably as long as a Harry Potter book. With that being said, what are your top three ways PES could improve?