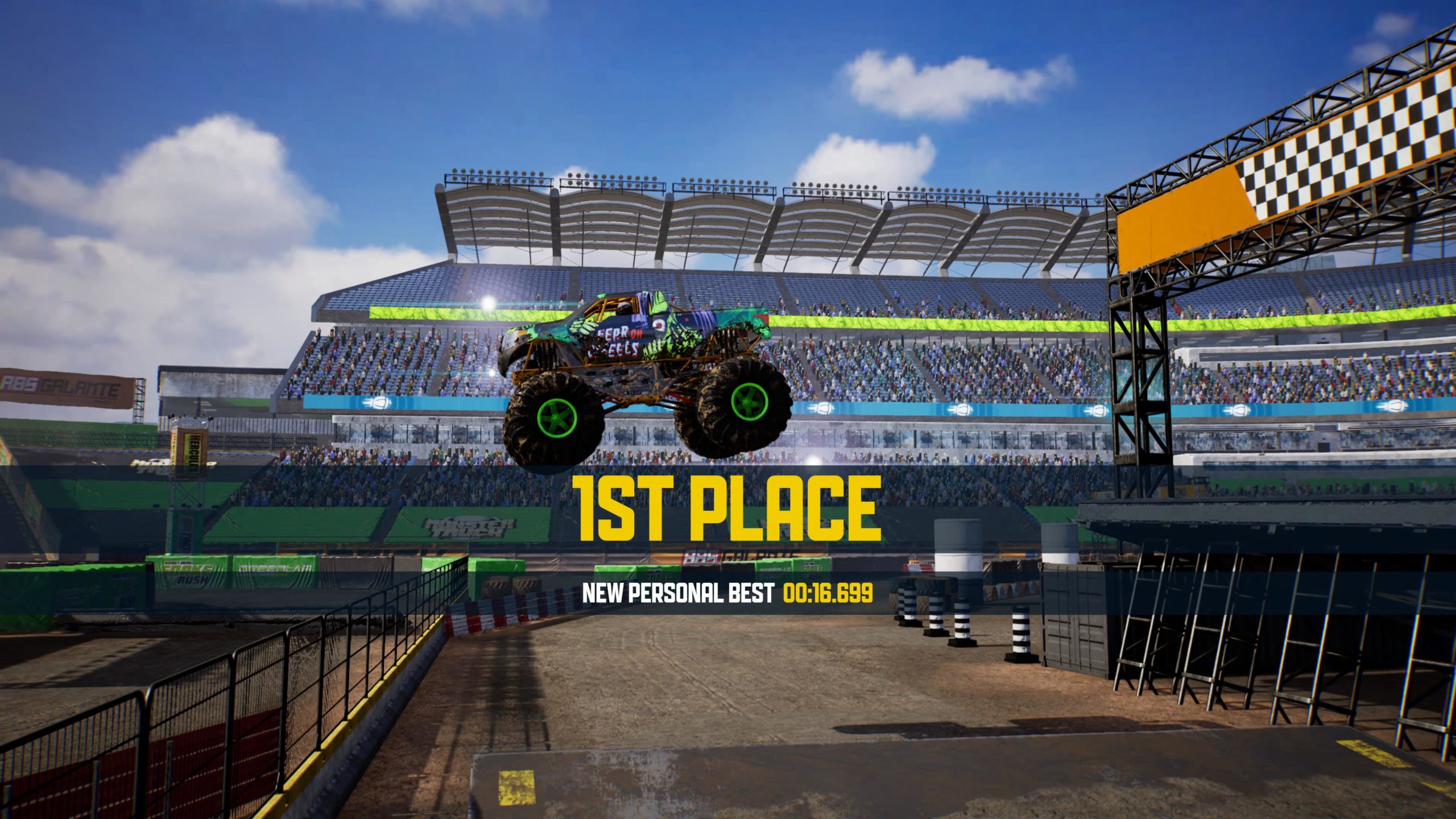 Teyon and Nacon initially released Monster Truck Championship on the PS4, PC, and the Xbox One in October and are now releasing the upgraded edition for the next-gen consoles here in North America on March 16. I initially did the review back in October, so for this next-gen Monster Truck Championship review, I hoped some of my issues with the first release would either be eradicated or corrected.

That being said, instead of comparing this version to the initial one, I wanted to take a fresh look at what Monster Truck Championship offers to the community on the PS5 and Xbox Series X, and how it stands on its own four wheels. 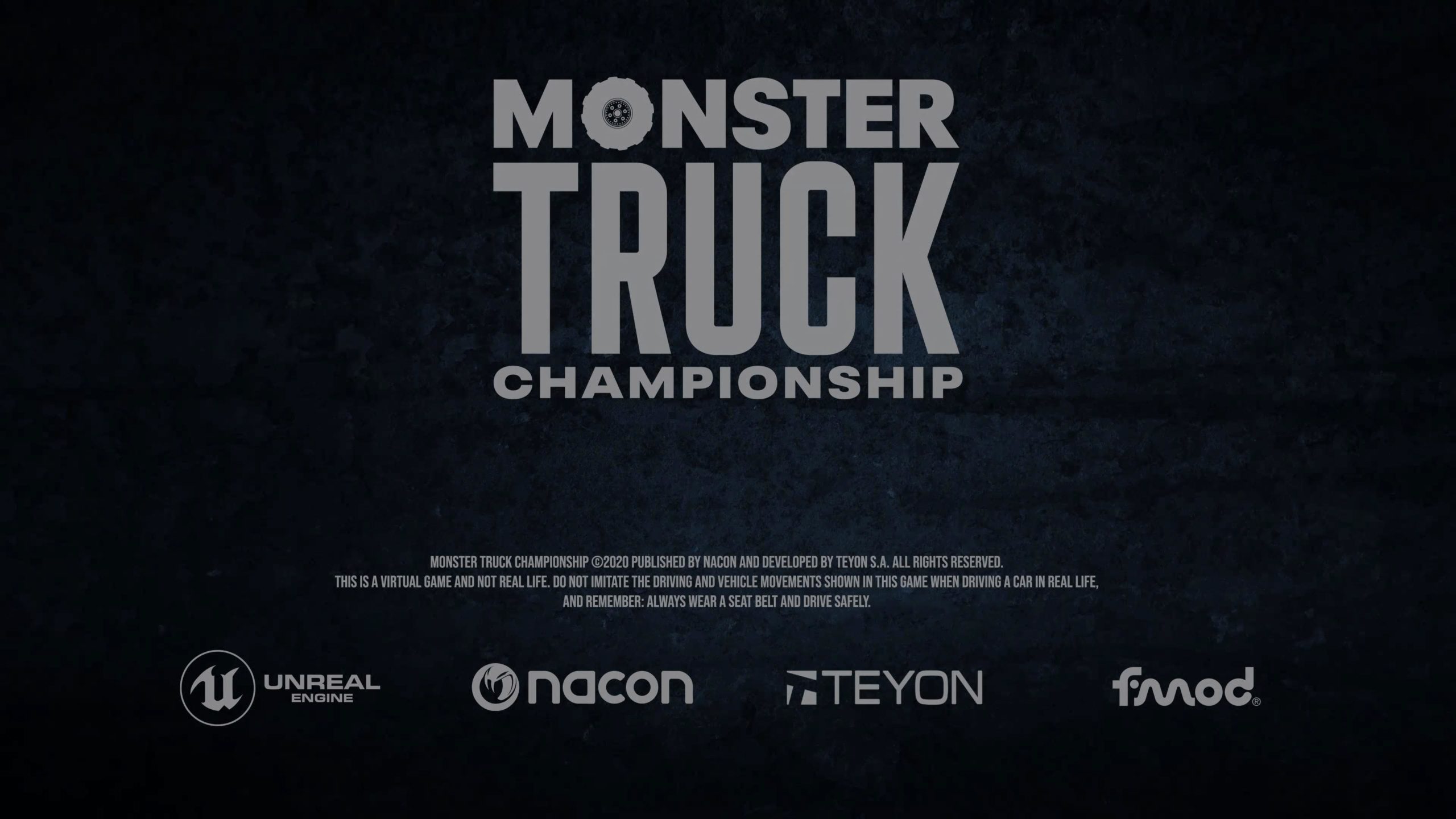 For many, the career mode that is offered within Monster Truck Championship is where much of your time will be spent, and rightfully so. I started as a newcomer and worked my way through two junior circuits, which consisted of the National League and Professional League. If I displayed enough skill and garnered enough championship points, it would lead to me reaching the ultimate goal in the game, which was taking foot in the Major Leagues of the Monster Truck Championship Division.

What I found to be quite authentic was that the truck that was provided at the start of my career was, well, garbage. Its performance was underwhelming, and the trucks I received as my career progressed were much better. That is the way the community as a whole would probably prefer to see it play out for the most part, but it’s not necessarily the way it always goes in these types of games.

Once I started attending events and securing a consistent place on the podium, which was not always easy, the funds and experience allowed me to upgrade that equipment.

As your career progresses, there’s a depth to the career mode in the form of research and development and logistics. The game allows you to create a branch of employment where employees have specific tasks assigned to them. Some employees will take residency in the shop to help deliver a better product on the track while others are out working on contracts, sponsorships, and different forms of recognition.

One of the aspects I love about the career mode is that it creates an atmosphere of true ownership, and in doing this, it creates a real sense of urgency while physically at the track. If I chose to beat up my truck during a race or an event, that had a true impact on my bottom line back at the office. This, in turn, prohibited me from upgrading my truck in ways that I needed to truly compete week in and week out on a consistent basis. 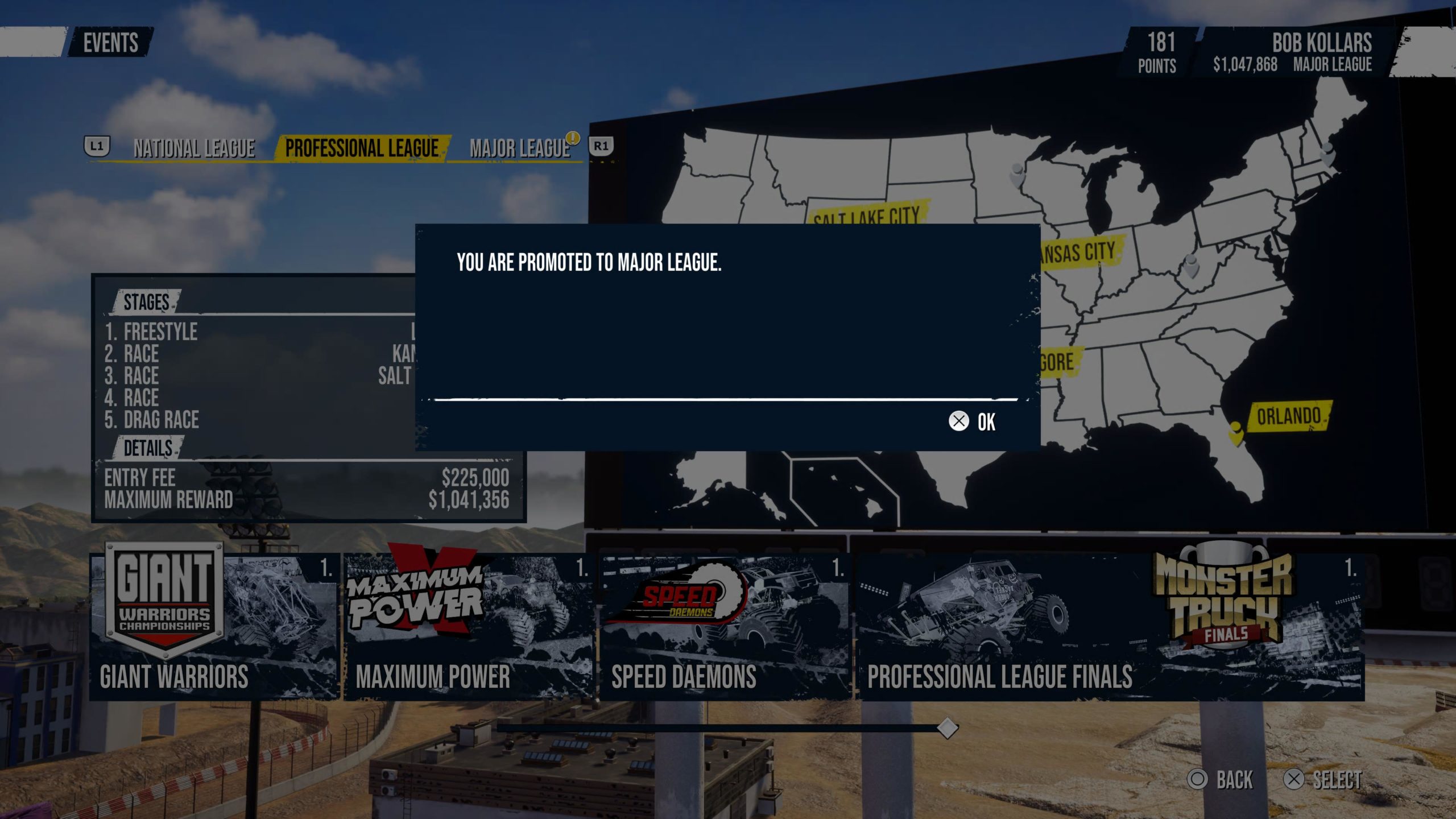 Now, not all is perfect in career mode, as there is a bit of repetitiveness and some of the inclusions, like research and development, aren’t as deep as they could have been. I did feel a bit cheated when I thought about what the developers could have created if this were a fully financed AAA title.

That said, the career mode in Monster Truck Championship is fun, addictive, and had me coming back often throughout my time with the game.

I spoke of this earlier, but the upgrade system that the developers have created and implemented with Monster Truck Championship is extremely addictive and enjoyable. While some items can be unlocked monetarily, most are locked behind barrier walls. This means they must be unlocked by securing and obtaining certain goals throughout career mode.

What I found most exciting about the upgrade system is that each item that you upgraded created a tangible feeling of improvement while on the track at the event. When starting out in career mode, I was given the essentials and my performance and truck displayed that during each event, and while understandable, it did get frustrating at certain points. 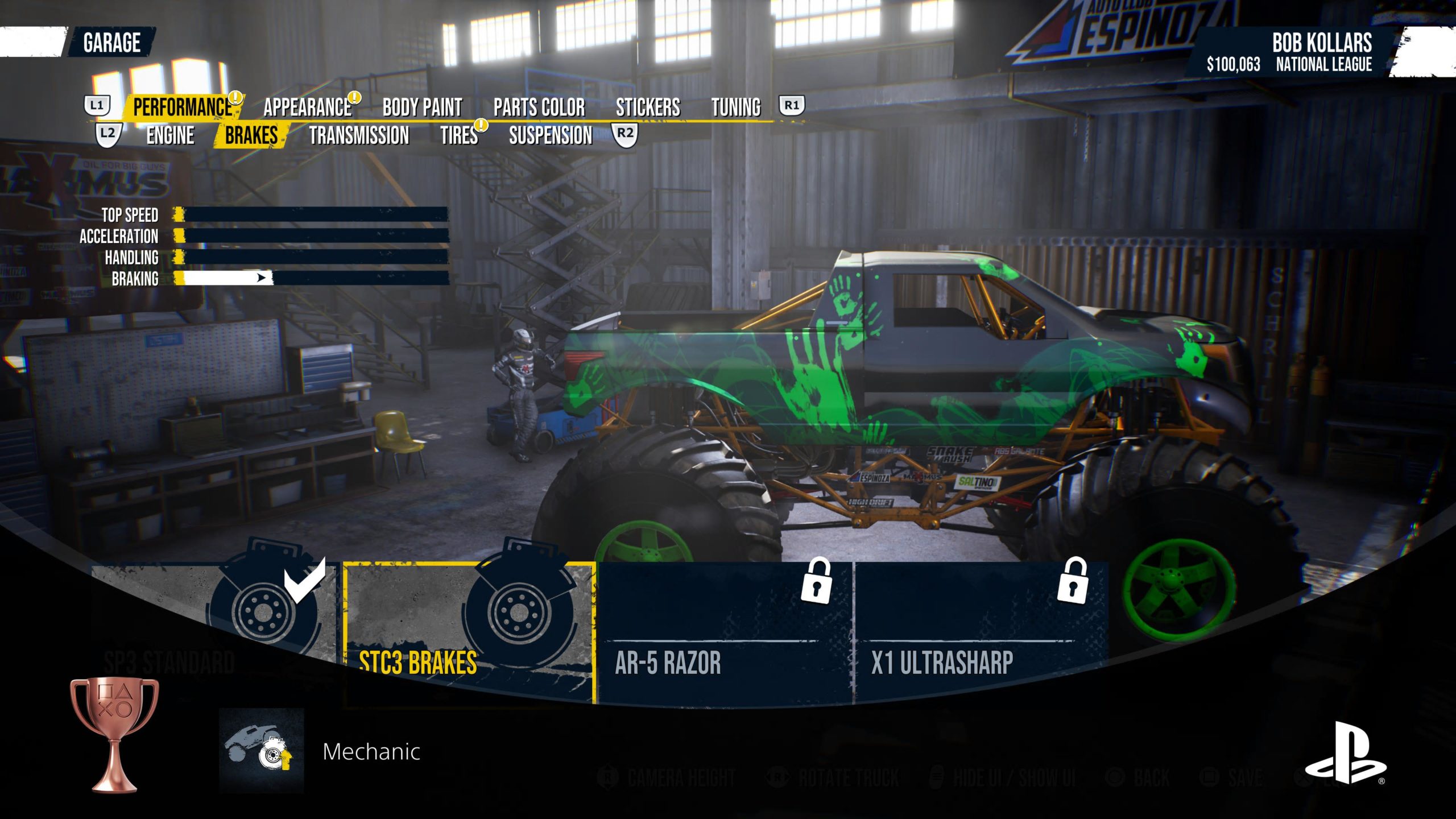 The way the upgrading system works plays well in creating a bit more depth to career mode and the game in general. I found the different body styles, shapes, and truck kits that were most exciting and enticing for me were the hardest to unlock and took me well into the third level of my career to do so, which is the highest. Lastly, the way the system works allows you to create certain setups that work better at certain tracks and within certain types of events. So, if you’re involved in a long race and need more speed, you can apply a setup that will allow that. If you find yourself in an event full of mayhem and destruction, you can apply a setup, if unlocked, that will give the truck more durability and stability.

As you will see throughout this review, a lot of what I like and don’t like are interchangeable within each mode. I’ve spoken about the career mode and the upgrade system, and that plays heavily into the control system of the trucks throughout the entire game.

Early in career mode, I found each truck to be twitchy, somewhat hard to control, and hard to manage, which is never a good thing when trying to maneuver a 12,000-pound vehicle around a track. As I upgraded my truck, the controls and the ability to maneuver the vehicle felt more like a race car and less like a concrete truck. 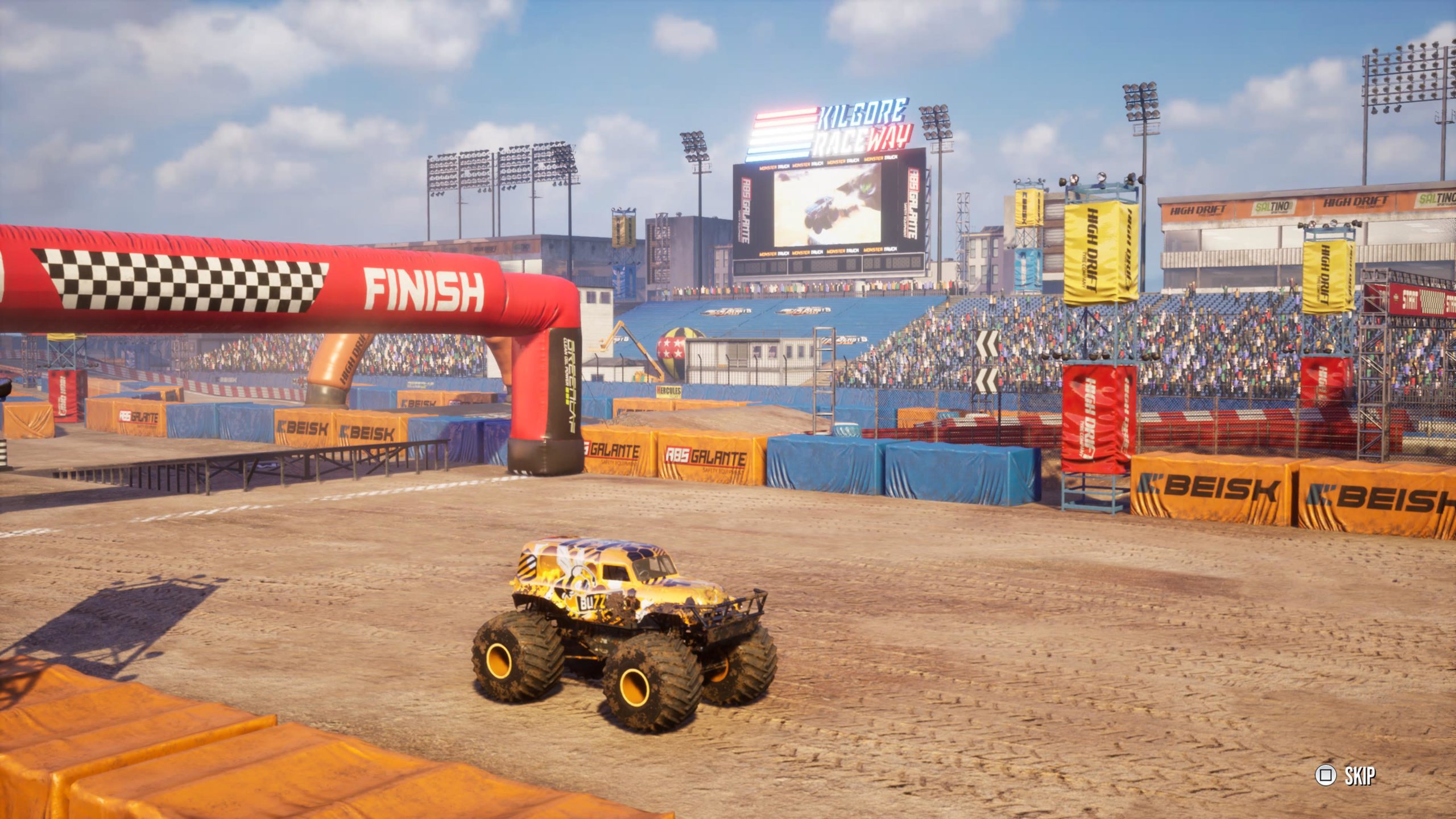 The more familiar you get with each venue — and how each truck performs at those venues — the more comfortable you become with how to approach each event. There are certain events that allowed me to open the truck up to its max speed, but in doing so I had to be fully aware of each turn and nuance.

If your approach to each event in Monster Truck Championship doesn’t change, you will be penalized. It’s that simple. There is no way to cheat the system other than taking time to gain experience at each venue. That is the way the developers wanted it, the way they implemented it, and the way I needed to approach it.

The best part of the control system is how you manage your approach and treat your truck during each event has an impact on how your truck reacts and performs from the beginning to the end of that event. 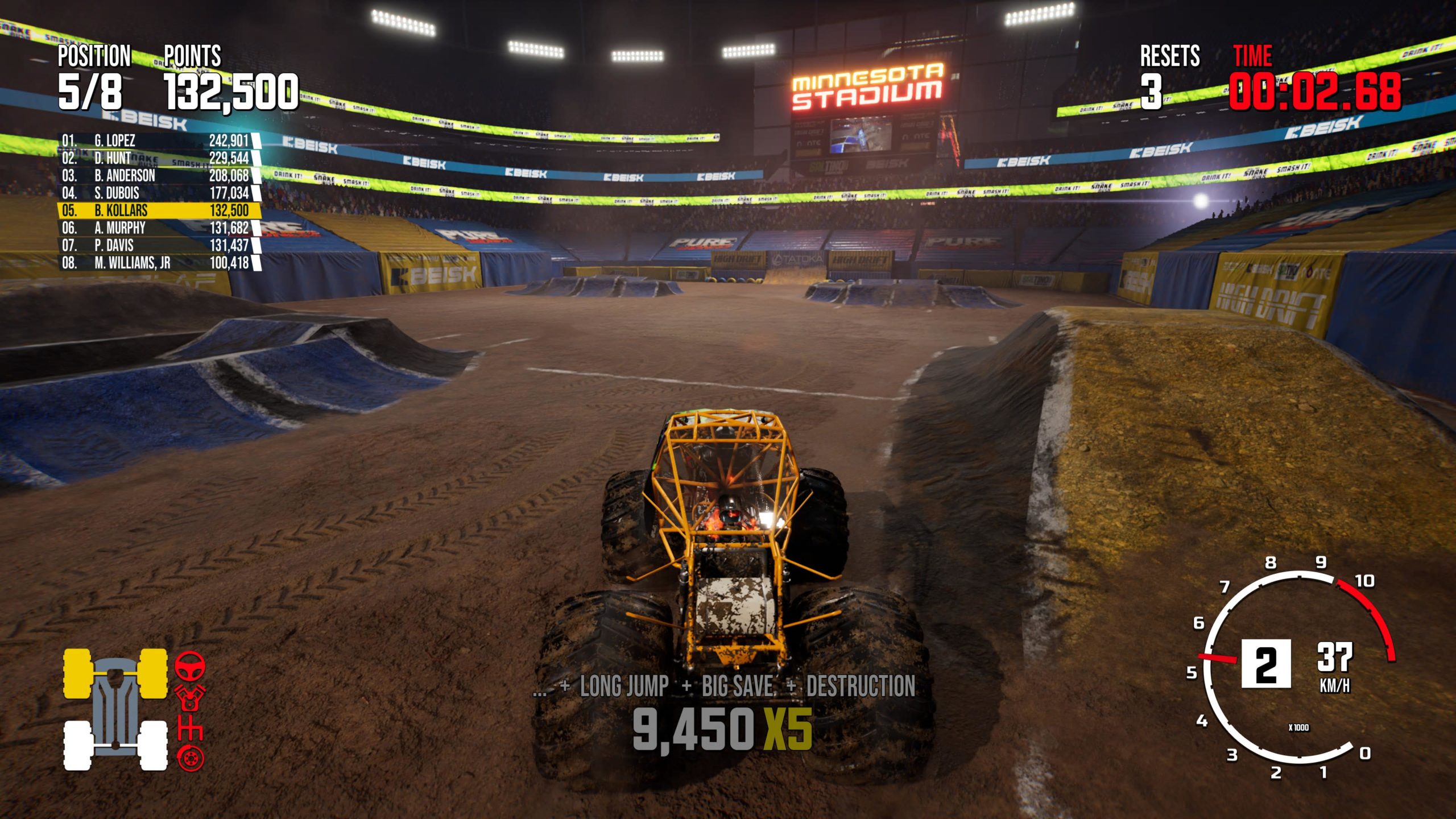 If your approach is to “drive it like you stole it,” you’re going to pay the price over the long haul. Before I fully embraced this type of mindset, I found the more aggressive I was at each track the more damage I did, and it made the events very difficult at times.

The one caveat to all of this is that I wish the developers would have included a DNF (did not finish) system. If you choose to race erratically and dangerously, it will limit what your truck can do on the track, but you will always find a way to finish that event.

The AI opponents that you will face offer a different type of challenge depending on the difficulty level. That level of difficulty will also vary depending on your career mode level. What I found with the opponents in Monster Truck Championship is that they approached the race with an understanding that you are part of that race, as well as the other computer-controlled AI. 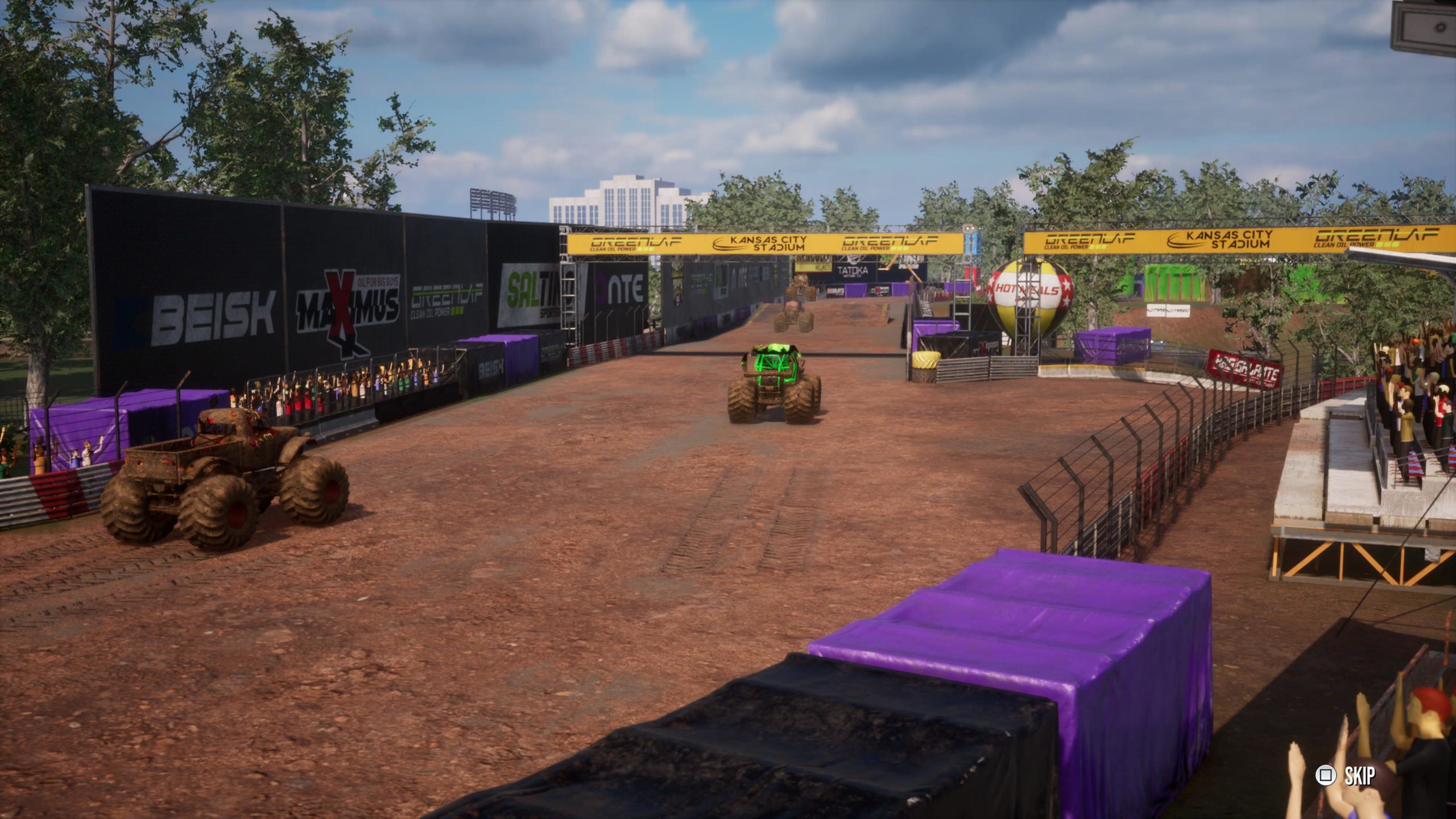 I occasionally found myself frustrated with the AI, but not for reasons that I typically do in games like this. Overall, the AI’s approach is very fair, consistently smart, and at times very aggressive. The AI drivers do not easily give up a position or spot because you are approaching them. They perform and act as if they are also fighting for career championship points and have a physical stake in the outcome of that event.

However, the AI in Monster Truck Championship is not perfect. There are times where the AI drivers will be a bit too aggressive. Regardless, the computer opponents offered a serious and fair challenge on the higher difficulty levels on a relatively consistent basis.

The overall look of Monster Truck Championship on the past-gen systems was decent to good, but that has changed with the introduction of the PS5 and Xbox Series X — and for the better. When I first fired up the game up on the PlayStation 5, I was quite impressed by the improvement from past gen to current gen.

Not only did Monster Truck Championship look better overall, which is to be expected, but it surpassed my overall expectations. The trucks themselves look fantastic. From the body to the tires to the underlying frame, the amount of detail that is included here and is visible during a race is quite impressive. 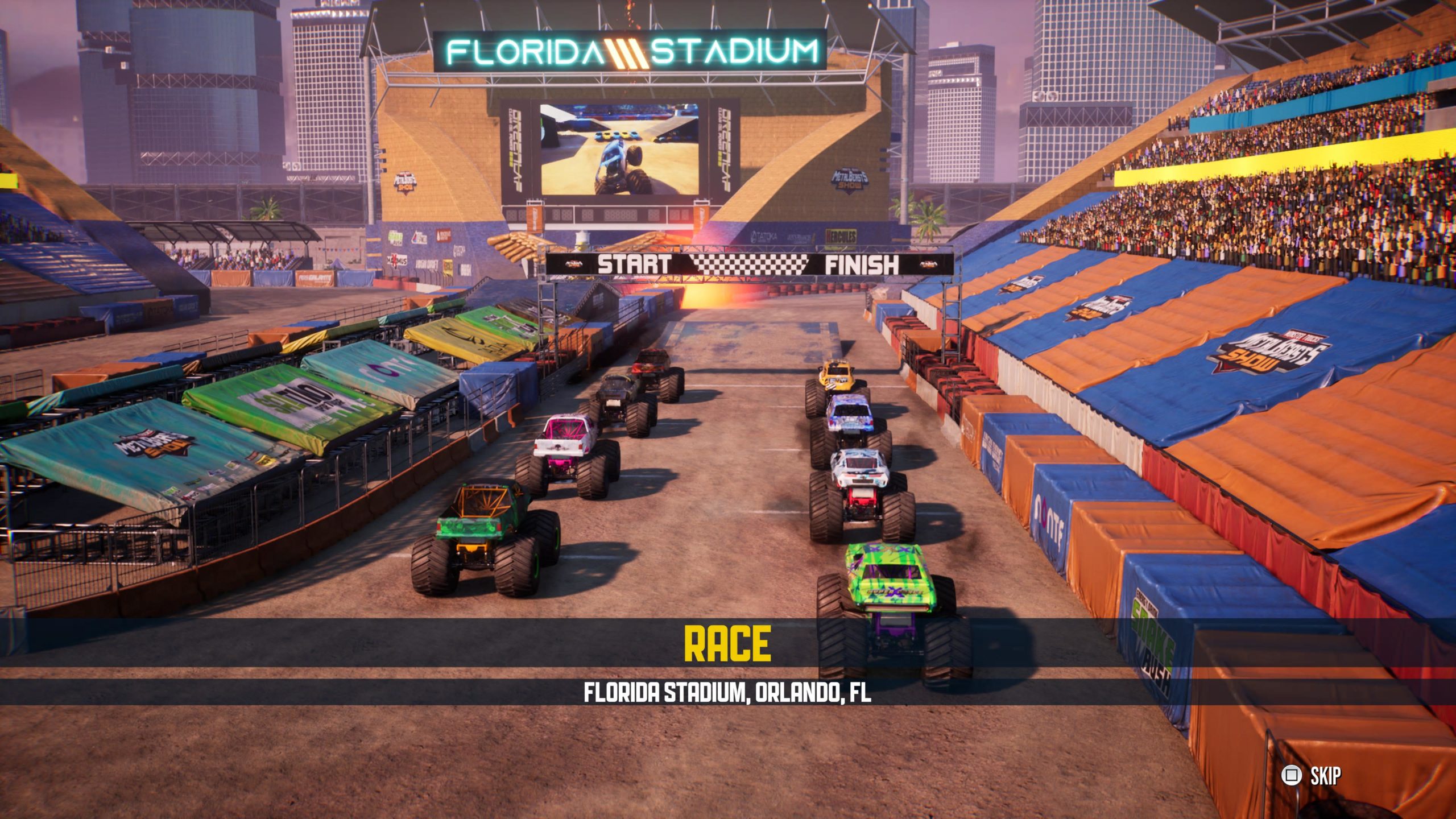 This also goes for the damage model that is implemented here as a damaged rotor, engine, or body frame is extremely noticeable from both a performance and visual standpoint. My single major graphical issue here relates to the venues. While the tracks themselves, and even the objects that are found during certain events look wonderful, the fans and the stands look very last gen, if not worse.

There is very little about Monster Truck Championship that I did not enjoy. That being said, I did come away with some concerns about the overall depth found here. Although I would consider career mode to be deep and provide longevity, it only took me 10-12 hours to reach the top division. 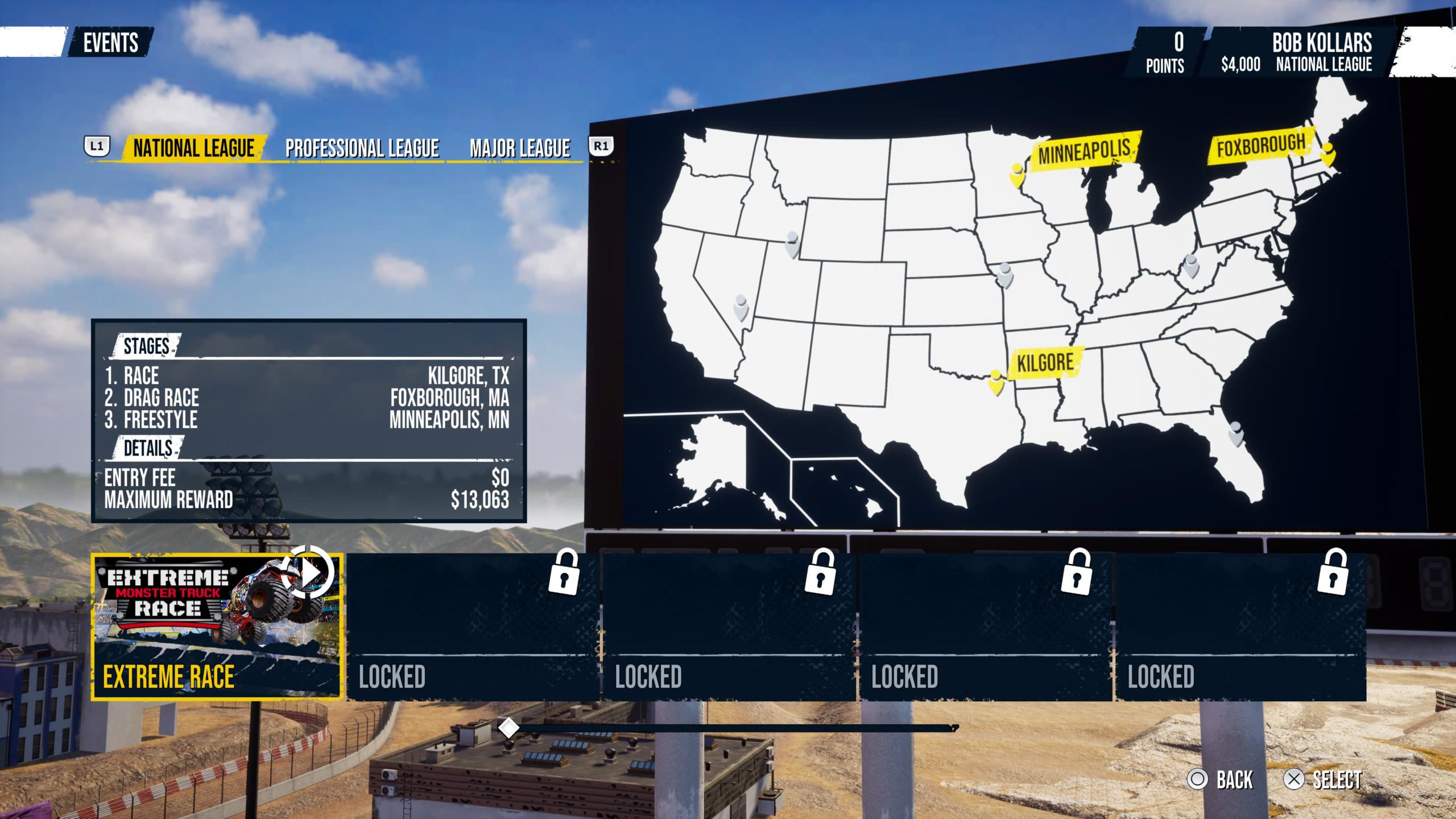 On top of career depth maybe being an issue for some, there’s not a lot that is offered up in terms of modes once you step outside of career mode. There is a quick play experience that allows you to jump in and play any of the events that are offered in career mode, and there is a multiplayer experience that allows you to create a private room or join a public server and play against random opponents.

That very well may be enough for most in general, but for those who are looking for something that provides an addictive nature for months to come, the limited depth here may be an issue for you.

The presentation for Monster Truck Championship is well done when it comes to the visual experience during an event. If you attempt and accomplish a big maneuver within one of the events, there are fireworks and pyrotechnics that coincide with your attempt and it’s visually beautiful.

The problem with the presentation is that it ends abruptly once you leave the venue and event. Even if you win an overall event, you wouldn’t know it by the splash screen that is presented post-race. 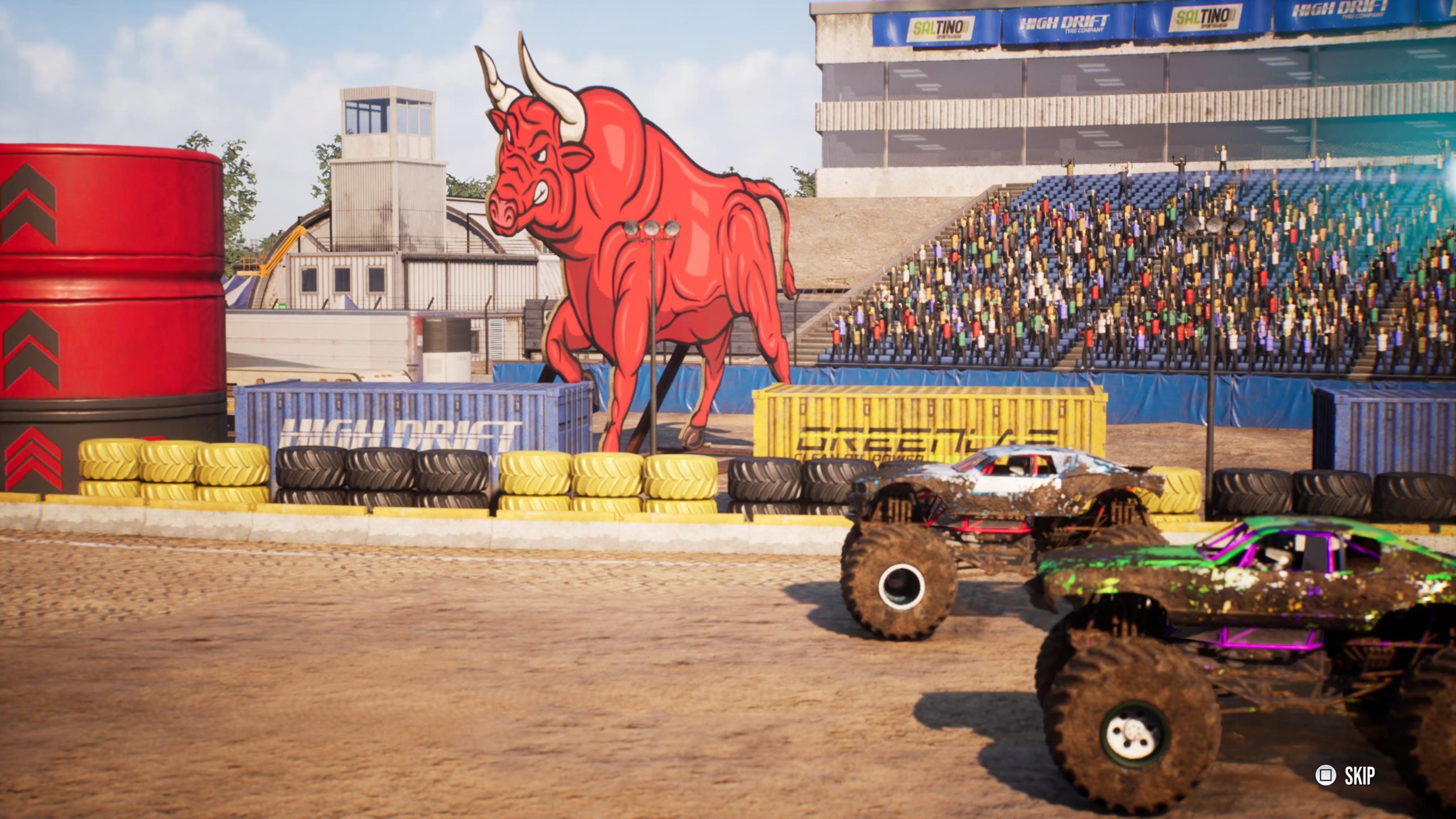 The developers also don’t own the licensing rights to be able to provide truck schemes and designs that many fans know and love. It would be nice to be able to see fan favorites like Grave Digger, Monster Mutt, or Megalodon, but that simply is not the case here. Still, while I was initially put off by this, the strong designs and concepts that are provided by the developers here made it less of an issue as time went by.

It does not include fan favorites in terms of licensed and recognizable monster trucks, but it makes up for that with some great in-house schemes and execution on the track. Monster Truck Championship delivers a lot of fun and addictive gameplay that feels real, and does so while offering up a lot of ways to make it accessible to all levels of skill and ability.

Monster Truck Championship may not have enough depth to be a mainstay in your rotation for months on end, but it makes up for that in other ways and should be viewed as a solid addition to your collection.