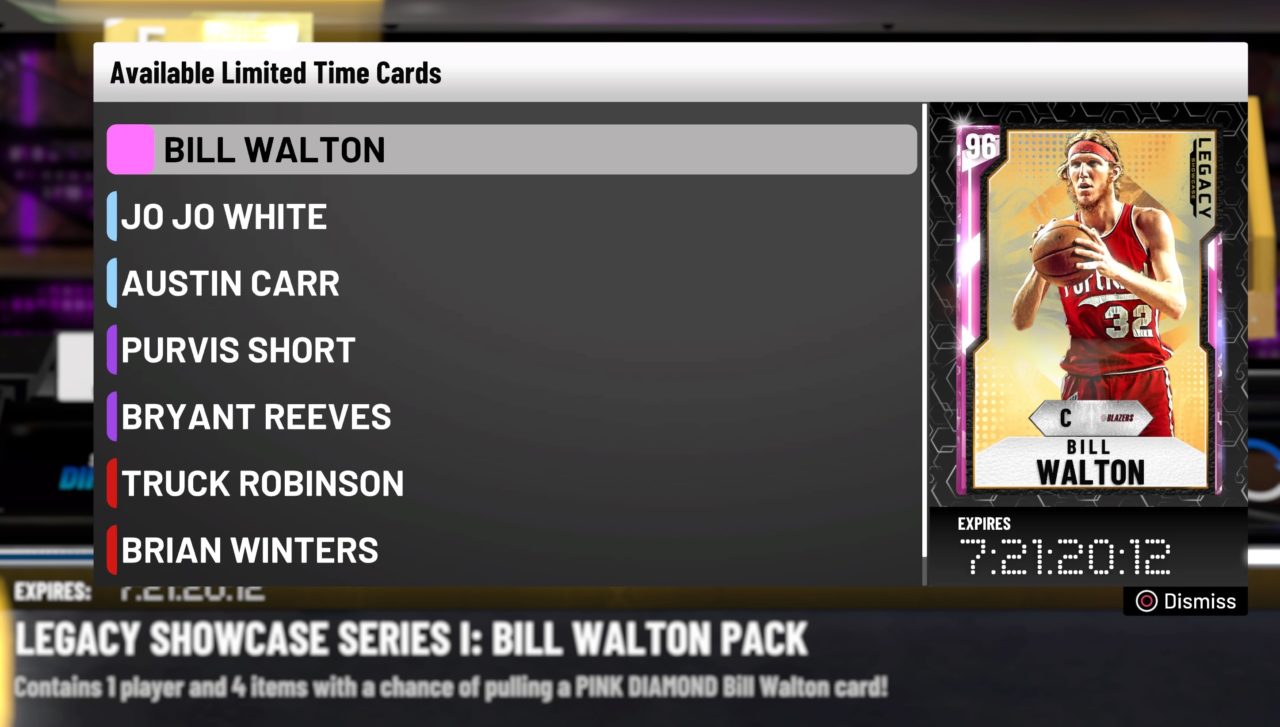 It’s Monday and that means we get some new Legacy Series players in NBA 2K20 MyTeam. The point of the Monday updates is generally to give users more “under the radar” players, with later in the week being when the bigger update comes out. This week is a bit different because the release of the Pink Diamond Bill Walton ends the first batch of Legacy 1 Series players. This means if you can collect all five (Earl Monroe, George Mikan, Sidney Moncrief, Bernard King, Bill Walton), you get 200 tokens. It’s not cheap to finish this collection, but 200 tokens is a lot at this point in the life cycle of the game.

🚨 Last Legacy Showcase Series I packs. Get that Pink Diamond Bill Walton card to collect all Legacy Showcase players from Series I and earn 200 tokens 🤯 A huge opportunity at this stage in the game. Other cards:

In addition to Walton, there are six other cards in the Legacy Series 1 packs this week. They are a diamond Jo Jo White, a diamond Austin Carr, an amethyst Purvis Short, an amethyst Bryant Reeves, a ruby Truck Robinson and a ruby Brian Winters. The Bryant Reeves evolves to a diamond, but it doesn’t really look like the card is worth evolving according to the 2KMT Central website — the evolution really only adds to Reeves’ already solid rebounding.

One other note about the Bill Walton card is that by Pink Diamond standards I don’t think it will make it into a ton of lineups, but it does have a gold Dimer badge, which makes it the highest-rated center with that badge that most people can acquire right now. The Galaxy Opal Aryvdas Sabonis has the hall of fame Dimer badge but I suspect just about no one has that card yet. In addition, the Pink Diamond Wes Unseld reward card also has the gold Dimer badge, but he’s of course only 6-foot-7 and does not have PF flexibility like Bill Walton. So if you can force double teams with Walton and kick it out to your shooters, you may have better luck hitting those jumpers.

Lastly, I think that Jo Jo White card may be worth checking out. He was one of my favorite players to use in prior NBA 2Ks, and his athleticism for a diamond point guard is elite at this juncture. He does not have a Clamps badge, which hurts at the PG position and may invalidate him for some, but he does have flexibility to play point guard and shooting guard.