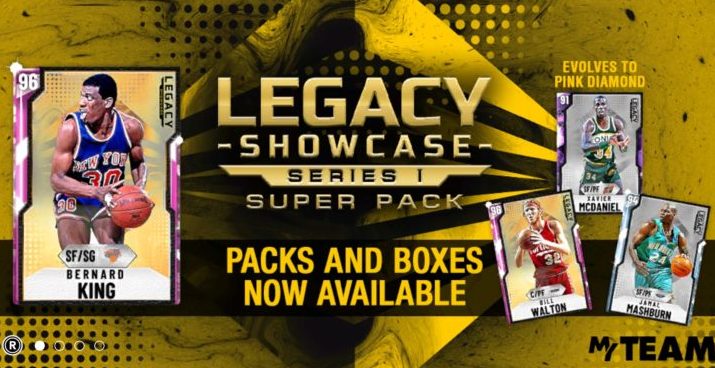 Starting with the duos, you can see now when they’re activated by a pulsing set of blue arrows on either side of the position aspect of the card. You can also tell because Rudy Gobert and Donovan Mitchell are both emeralds unless they’re in a duo. But as you can see above, both are activated and have turned to ruby players. The same thing happens with Jimmy Butler and Moments of the Week 4 Bam Adebayo when they’re teamed up.

2K has the full list here, and again I’ll look more at some of these duos tomorrow, but just know this will probably be an ongoing element now in MyTeam — as it was in the past. One thing I will point out now just to be clear is not every Jimmy Butler and Bam Adebayo are a Dynamic Duo, rather it’s very specific versions of these players for every single duo.

Elsewhere, 2K appears to be starting their own form of Black Friday promos by combining a bunch of players from the first Legacy Series into one pack for a limited time:

🚨 Legacy Showcase Series I: Super Pack 🚨 Live until 8am PT tomorrow 11/27, here's another chance to complete your Series I collection and earn 200 tokens! pic.twitter.com/CL918izKAB

So you have until tomorrow morning to try your hand at these if you want to gamble. You can only buy these packs with VC (real cash) and to be clear, it does not mean the only cards in these packs are the really good diamonds and pink diamonds. You can pull any card from these Legacy Showcase packs, so be wary and aware of that fact.

Lastly, there are two promo codes that are active right now that have not been mentioned on Operation Sports as of yet, so here they are:

💡 Spotlight Locker Code. Use this code for a guaranteed Isiah Thomas, Dirk Nowitzki, or Kevin Garnett Spotlight Pack. Which one you hoping for? Available for one week pic.twitter.com/mlzDEao2BB

The second promo code guaranteeing you an amethyst Duncan/Pierce or ruby Iverson is nice value, but it’s a bummer if you have those cards already and were hoping to sell them for profit. Bummer for those people, joy for everyone else.