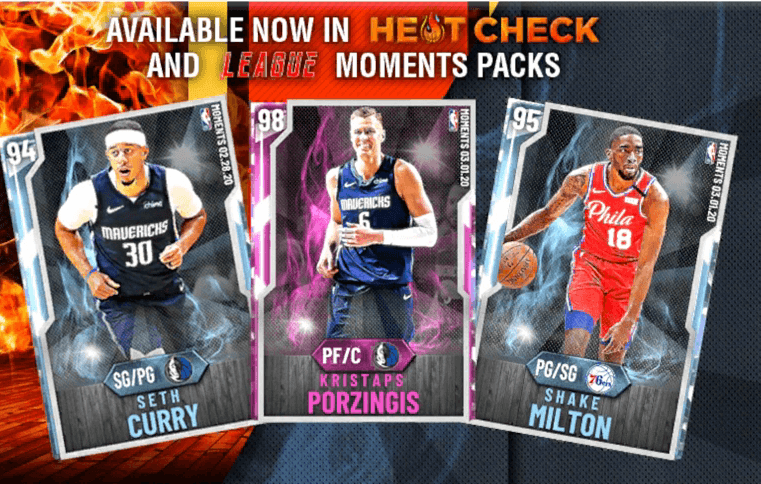 Moments Kristaps Porzingis highlights the four-pack of players released in the latest Moments release for NBA 2K20 MyTeam. We seem to be getting fewer Moments players since 2K stopped doing Moments of the Week, which is a bummer. Still, this four-pack is somewhat interesting. I don’t think any of the players will be amazing considering what’s out there, but I’ve had some time to mess around with them to give some brief thoughts.

Let’s get to them. 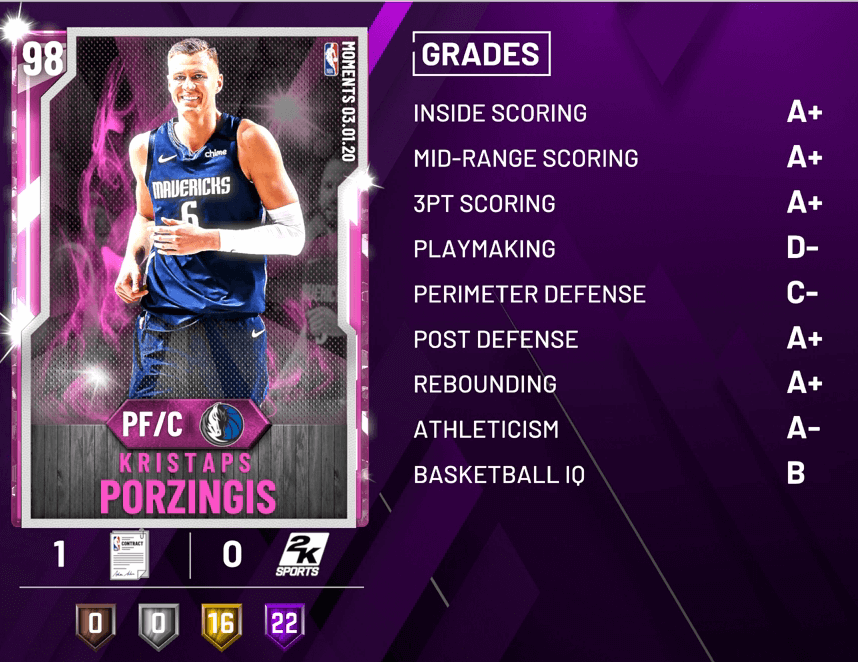 Quick Analysis: I’m not here to question Porzingis’ credentials in 2K because everyone should know at this point how good he is in the game. He’s a great 2K player and that’s the reason he was one of the few cards from the first Live series to even see play while new cards were coming out. That being said, this version is not some epic upgrade from his other pink diamond or Moments diamond. It’s a good card, but there’s no need to pay some massive premium for him right now.

This version could end up cheaper than the Prime series pink diamond just due to what that card ties into, so that’s the only way this pink diamond ends up making sense to me. I’m perfectly fine just using his diamond card still if you really need a Porzingis in a pinch. Kristaps is a 2K staple where you can assume we’re going to keep getting better versions of his cards, so there’s no need to jump on this one as the must-have card. 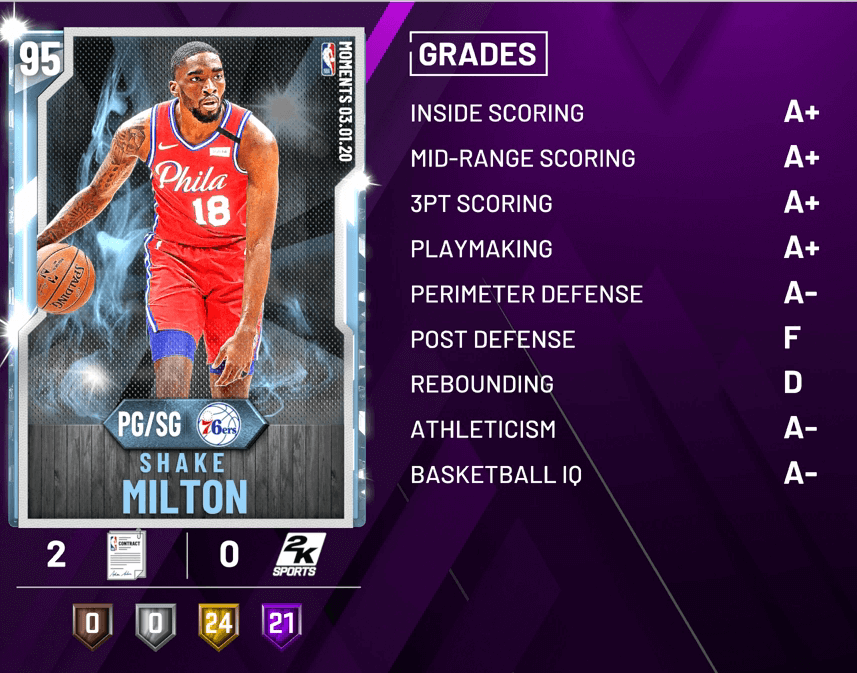 Quick Analysis: This is my favorite card of the four. Milton’s a sweet-shooting point guard with some size. It’s something we have plenty of already, but it’s fun to get a player we won’t normally see. His shot release is a little slow, but it’s very repeatable. He has a little pause at the top, and so syncing up the timing is very easy in my book. He’s also got just enough right now to survive in the athleticism and defense departments.

He’s not lockdown, and he’s not going to jam on everyone, but he still has most of the “usual” things people need like the hop step and gold Clamps. This also means he has HOF Fancy Footork, plus he has HOF Range Extender and Quick First Step. He’s been a blast to use, and I’m sure that’s maybe because he feels “new” instead of using my fourth Porzingis card, but hey, it matters here. 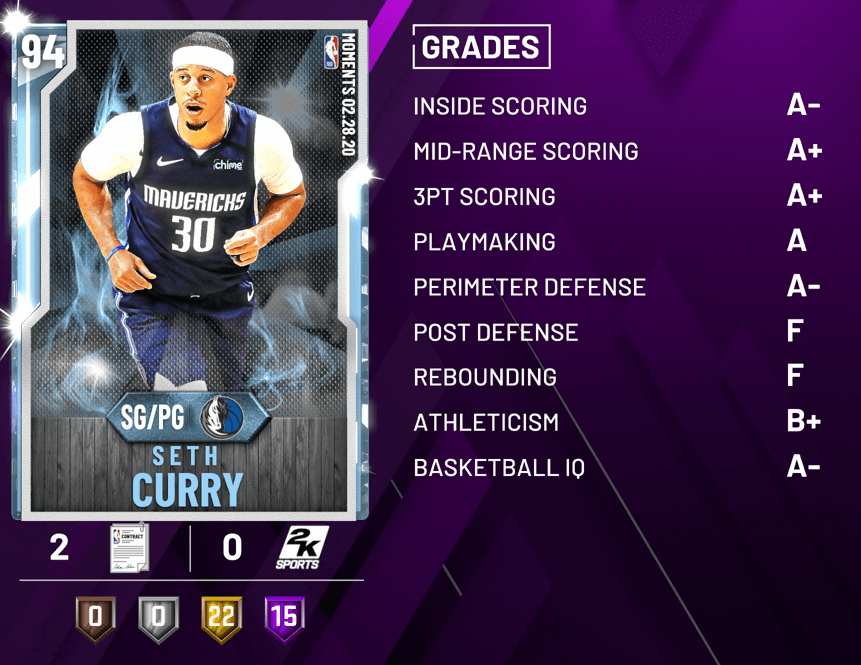 Quick Analysis: This is the weakest of the cards, but it’s not Curry’s fault. He’s actually still really good, but I don’t know if he has a real place right now on teams. He’s a not an amazing “budget” option — though he’s very good still — and he can’t be used in quite the same way to game the team overall rating. On top of that, he’s undersized so even though his shot is pure, the other qualities are not quite there.

But it doesn’t mean he’s not a good combo guard. I still think he’s like a third or fourth tier option and will look better in a week or two, but for now he’s more of a pass. To put it another way, he reaches all the bare minimums like Shake (except for HOF Fancy Footwork) but doesn’t have the size — and I’ve used Curry in the past. 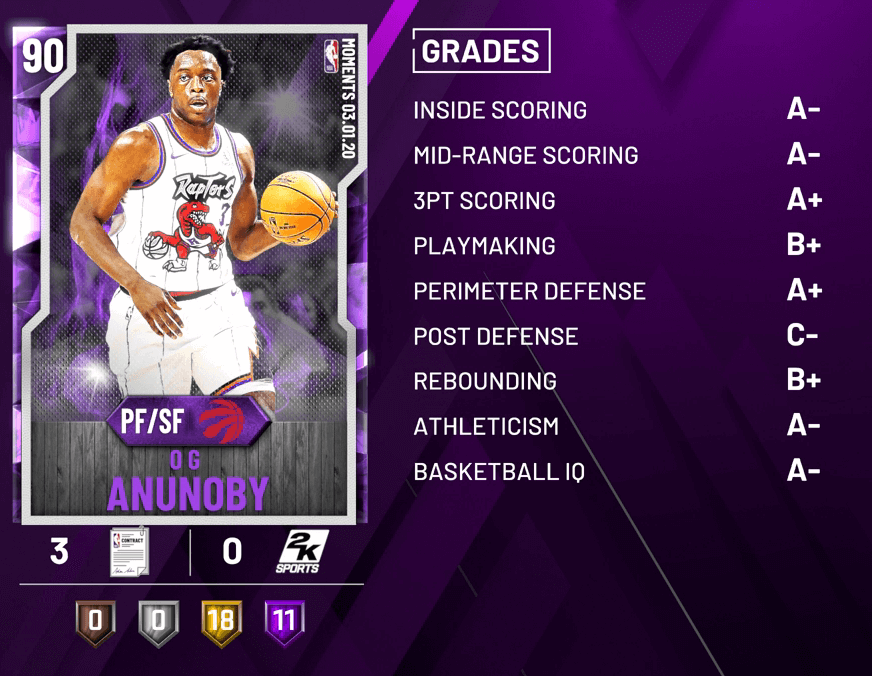 Quick Analysis: This card is the funniest one to me because it does so little to change my opinion about Anunoby. OG was part of the enjoyable group of sapphire and ruby Moments cards from months back that included Jonathan Isaac and De’Andre Hunter. Basically, he was a “normal” 3-and-D player, and so this version has just been souped up a bit to keep up. He remains an interesting option on budget teams, but he’s still a 3-and-D player first and foremost.

He’s not some sneaky good dribbler or finisher now, he’s just out there with an average shot release who will body people. His problem is sort of like Webber’s on defense in that he just feels smaller than he really is in terms of height and wingspan. The strength is there, but I ended up liking Hunter and Isaac more than Anunoby the first time around for similar reasons, and I don’t think a ton has changed here. Still, I put him above Curry because he has more of a lane than Curry to playing time on more types of squads.