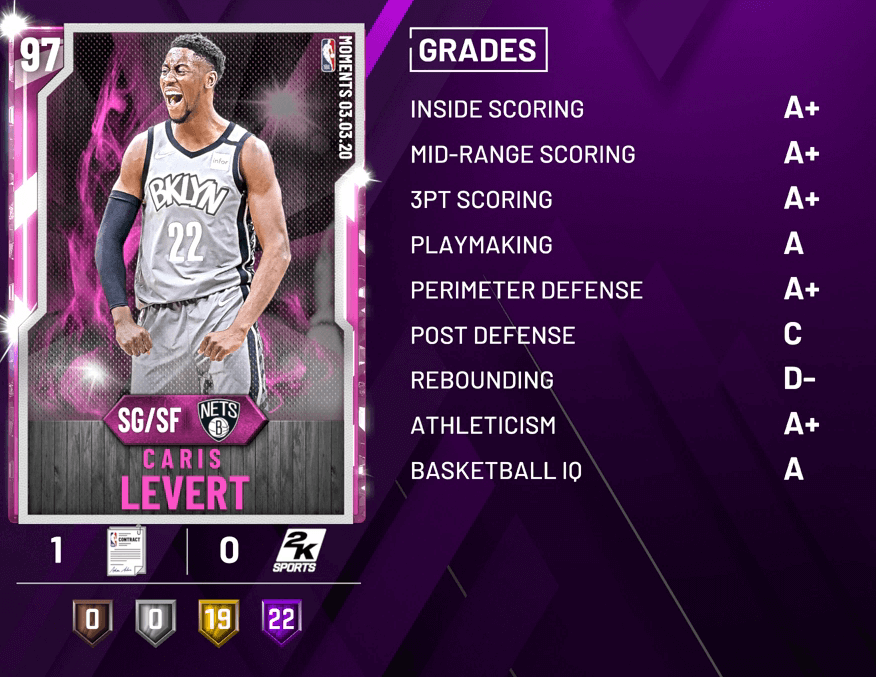 The newest Moments card is a pink diamond Caris LeVert. Going back to his amethyst Moments card, I was not the biggest fan of it at the time. However, I have a better appreciation for this version of LeVert, so let’s get to it.

Analysis: The original appeal for LeVert still comes from being a 6-foot-7 guard. He can move up to SF, but he has the right size to be able to switch on defense even from the guard spot. Stuff like basic physical attributes are taking on more importance because, in all honesty, a lot of these cards are starting to be very much the same thing in different uniforms. So you have to really start looking at height, shooting motion, dribble packages and stuff like that beyond the badges and attributes.

And I don’t mean to say attributes and badges don’t matter, but most of these players are getting all the “key” badges in one form or another, so you need to look more at the intangible or inherent qualities of the card to make some buying decisions. With LeVert, he’s not “glitchy” or anything like that in terms of his dribbles or shot form, but he’s just a very good guard. He’s capable in pick and roll, and he’s got a shot that is a little hard to get a handle on at first, but it’s not hard to green once you come to grips with the moving parts of it.

I have no problems running my offense through him, the issue is that so many players have HOF Clamps now that it’s hard for any one player to dominate without screens at this juncture. It’s very easy to get those contact animations, so you’ll want to run a lot of pick and roll and off-ball screens when using him. He has no post game, and his rebounding is nothing special, so his grab-and-go capabilities are not quite there. He’s in a lot of ways useful for players who don’t really want to stick with one style. He does not need to dominate your offense, but he’s not just some corner specialist. He’s someone you want to use when you want to have a whole bunch of playmakers on the floor at once to attack presses and zones.

I would put him somewhere in the second tier of combo guards now. He’s not MJ or even probably Buddy Hield (depending on how you feel about Buddy’s shot), but he’s good enough to battle against those players and still contribute.