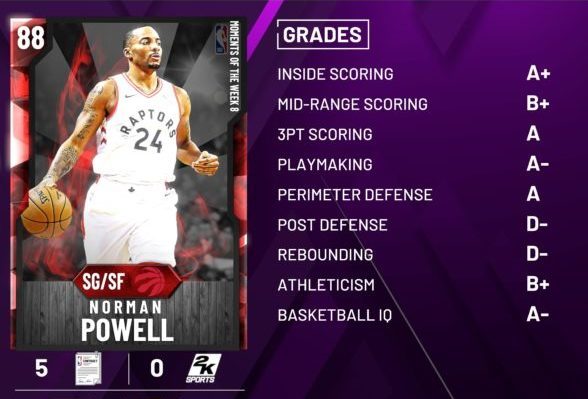 Continuing on with the Moments of the Week 8 reviews, let’s look at the amethyst and ruby cards.

Devonte’ Graham goes on the list of “budget beasts” for a ton of members of the 2K community, and his ruby card is actually a little more expensive than most, so this amethyst card could be worth getting purely because the cost could end up about the same for both cards by mid-week (or sooner).

Be that as it may, in a vacuum I don’t think a lot has changed between the cards to make it worth your time to upgrade if you already own the ruby. The new HOF badges he got will make him an even better shooter, but he’s got an easy shot and you should already have no problems sticking jumpers with him. For me, his defense remains shoddy, and so that’s why he remains a player I bring in to provide shooting off the bench.

Adebayo is a lot like Kemba to me, but on an even worse level. I respect Bam’s game, he’s a better pro than I ever expected him to be, but he’s trash in 2K. His style of player just has no place in a game with a very defined meta. He’s too small to play center, he’s not good enough as a shooter, and his playmaking just does not translate in a way that matters. He’s a man without a country in 2K, and with an amethyst you’re not getting any advantages in terms of cheapness.

Beyond that, his sapphire card has a duo with sapphire Jimmy Butler, which this one does not. Pogo Stick is a useful enough HOF badge to get, but otherwise even with a ton more gold badges, I don’t see a real need to change out his emerald Moments card if you really want to use Bam. If Bam gets a card that’s super fast, maybe he will work from time to time at center. But unless 2K gimmicks his shooting and makes it better than it really is from deep, you won’t get a Draymond Green-like card out of Bam.

Much like with his Philly teammate Joel Embiid, I struggle to shoot with Tobias Harris. The HOF badges he got makes it a little bit easier to shoot with him this time around, but this is another one of those minor updates from his old ruby Moments card. Harris does not get the respect he deserves yet with is post-up abilities and ability to beat up smaller players so that hurts his value as well.

If he gets a card that better utilizes his 6-foot-9 frame at SF, then I will be more eager to use him for an extended period of time. As it stands, the base defense is decent but lacks badges, and he does not have overwhelming athleticism to go dunk on heads. 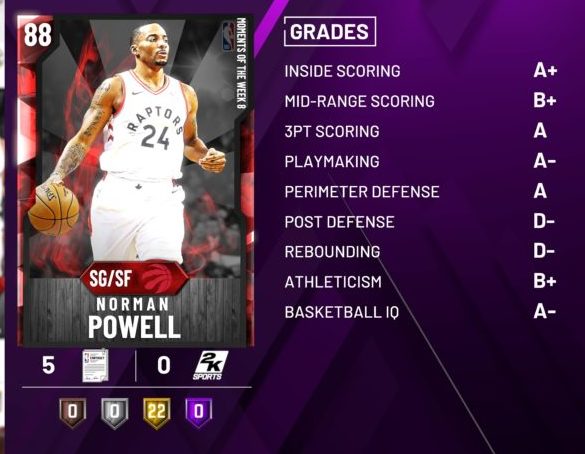 Norman Powell is going to be the popular pick for a budget beast this week because he checks all the boxes in terms of being a complete player. That being said, I think his shooting form stinks. He has gold Quick Draw (seems like 2K is just giving that out to almost everyone now after all the complaints from the community) so it’s a usable shot, it just does not mix well with me. I also think an 88 overall ruby is only so “sneaky” if you’re trying to create a team with a low overall rating.

He’s good, don’t get me wrong, but I think his usefulness is being overstated a bit so far in terms of being some budget monster. He’s a solid defender, but he’s only 6-foot-4, and the ball handling is decent but he’s not a point guard. You’re left with a relatively undersized player who can make some shots and play decent defense, but we have plenty of those already — even in the budget tier. 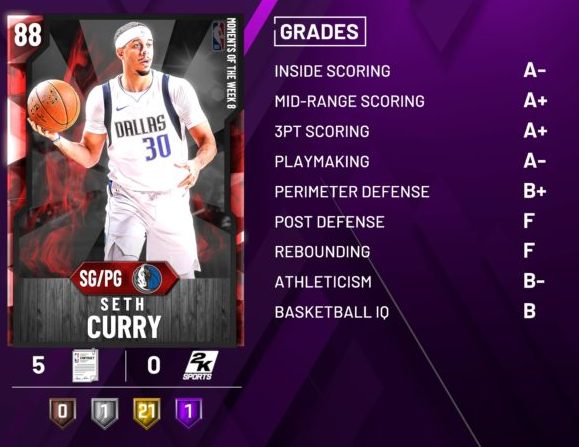 There is not much to say about Seth Curry. He’s just not a good enough point guard in 2K. So even though the shooting is good, as an 88 overall ruby I don’t think you’re getting enough value to give him minutes on your sneaky budget team. Curry is the reason why a player like Devonte’ Graham becomes popular — Graham provides the speed and playmaking that Curry does not at this tier. 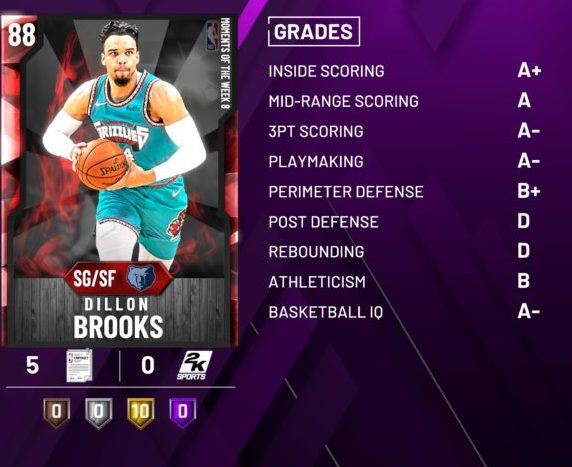 Dillon Brooks is a little like Norman Powell, but he did not get the defensive badges to go with the solid defensive ratings. In general, he just did not get enough badges overall. I think he’s still a better option than Seth Curry, but I don’t think you want to put either guy on your lower-end team when there are still better cards with much lower overalls to discover and try out.