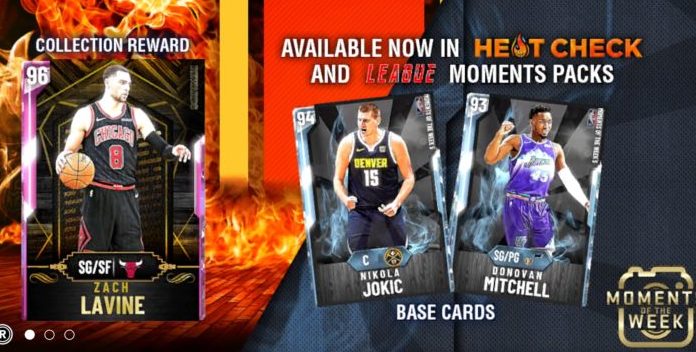 Zach LaVine has parlayed his 49-point performance into a Moments of the Week collection reward that appears to be one of the best cards in the game. 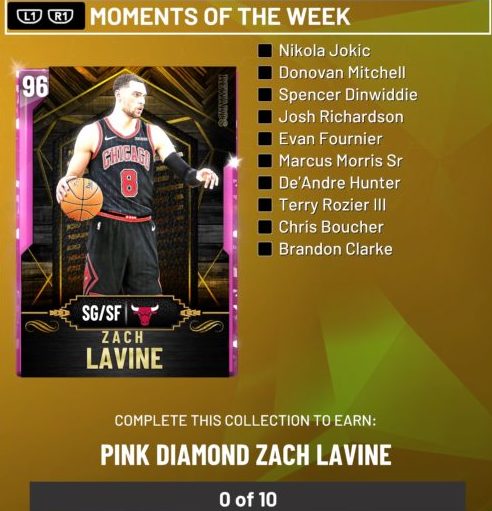 I want to look first at this LaVine collection reward because obviously locking in any Moments of the Week collection comes with considerable cost. Is it worth it? Well, I haven’t played with the card, but the badges and attributes certainly make it seem like it is worth it.

Yes, 2K gave Zach LaVine a Clamps badge, wild stuff. As absurd as that may be, having that badge, and some other decent defensive badges and attributes, is why this card gets my attention and has me thinking it’s one of the best cards in the game. He’s still a little small at 6-foot-5 and I think you’ll get plenty of people who still prefer the Paul Georges of the world, but this card is an offensive juggernaut who will not be a complete mess with his perimeter defense. It also makes his Moments of the Week 4 amethyst immediately obsolete — this is the life of MyTeam though. 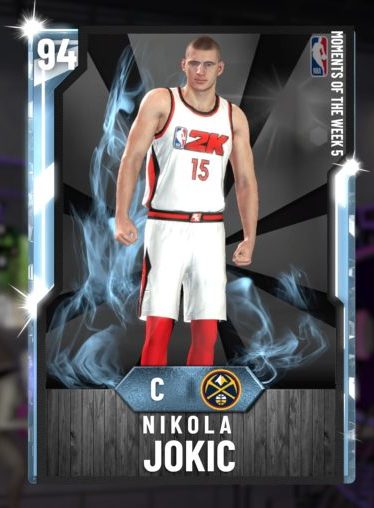 Another thing you need with any of these collections is a desire to get the other cards and lock them in with the belief that they will remain valuable on your team for an extended period. I think Moments of the Week 5 has that trait as well.

So he’s bad on defense, as you would expect, and his rebound badges are good but not elite. I could also argue his passing is not quite top tier, but he does get gold Dimer so it’s a bit moot. Overall, a solid card. 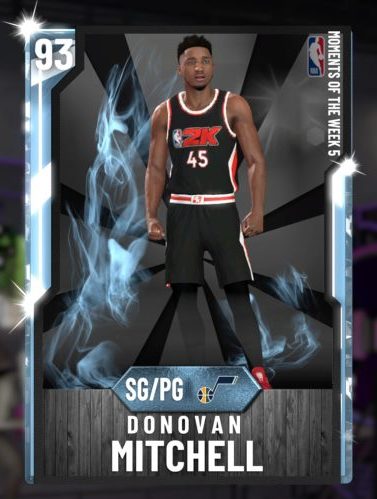 Mitchell gets point guard eligibility with this card, which should not be overlooked. He has 86 3-point shot, 90 speed, 95 offensive consistency, 95 driving dunk, 86 speed with ball, 86 ball handling, 86 lateral quickness, 85 steal and 79 perimeter defense. He gets HOF Consistent Finisher, Difficult Shots and Space Creator. He also gets gold Quick Draw, but no Range Extender or Clamps. This is basically a worse LaVine but one who can play PG. His defense gives me pause, but at least at PG he has decent size at 6-foot-3. 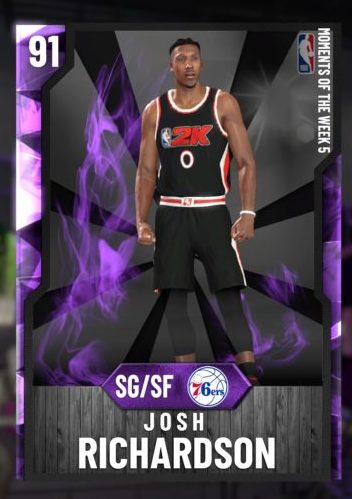 Josh Richardson looks like he could be quite a steal as an amethyst. He gets 90 3-point shot, 85 speed, 85 driving layup, 85 driving dunk, 84 speed with ball, 89 perimeter defense, 90 lateral quickness, 89 steal, but just 53 reaction time — so you might not be able to do spam steal garbage as much with him. With badges, he gets HOF Corner Specialist, Off-Ball Pest and Pick Dodger. In addition, he gets gold Clamps and Quick Draw. All in all, he’s a 6-foot-6 combo guard/forward who will be a 3-and-D player on your squad. He will fit his role quite well. 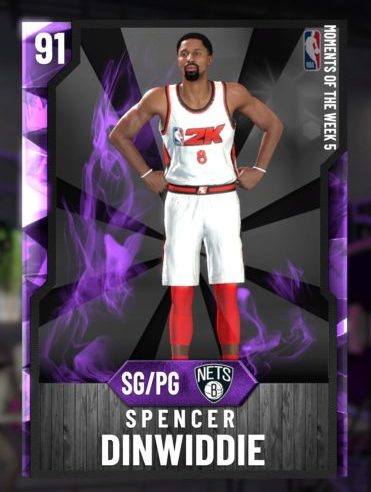 Dinwiddie is tough to judge because there are just so many good point guards, and his shot is very hit or miss for people. He’s 6-foot-6 which is great, but it really comes down to getting used to his jumper. He gets 85 3-point shot, 95 offensive consistency, 89 driving layup, 86 ball handling and 79 speed with ball. He has HOF Difficult Shots to go with gold Range Extender. All in all, I am not impressed by this card, and his speed with the ball mixed with the weaknesses on defense make me look elsewhere. 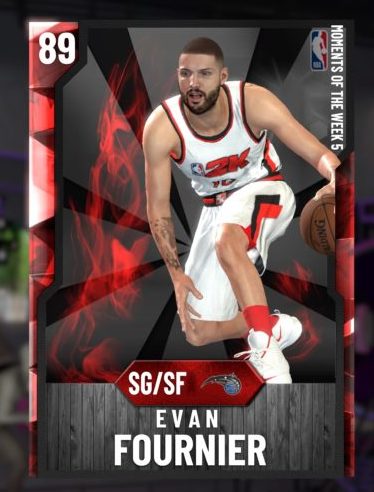 Fournier gets 93 3-point shot and 86 ball handling, which is really all that stands out. He should have some playmaking abilities to go with an easy shot release and good 3-point ratings. For badges, he has HOF Slippery Off-Ball and gold Quick Draw, Range Extender and Deadeye. It’s a solid ruby card. 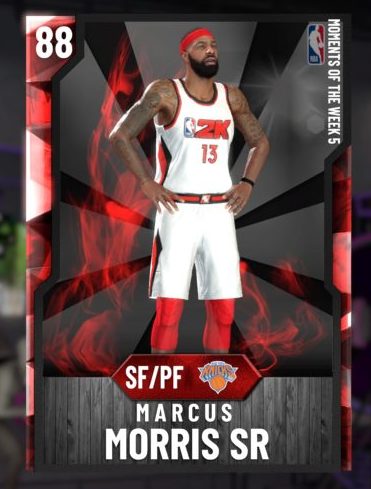 Marcus Morris Sr. has 93 3-point shot, 76 speed and 82 lateral quickness. For badges, he has HOF Catch & Shoot, plus gold Quick Draw and Corner Shooter. He does not get any pick and pop badges so he maybe isn’t a total pick and pop PF, but he should be better on defense than some of the other shooting-oriented PFs. 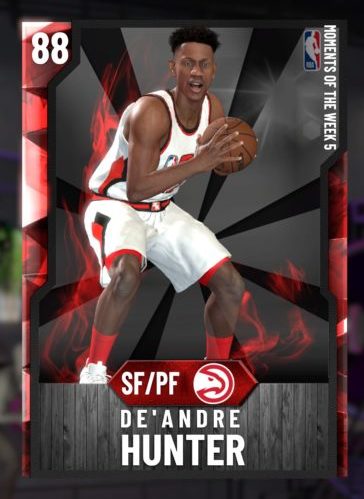 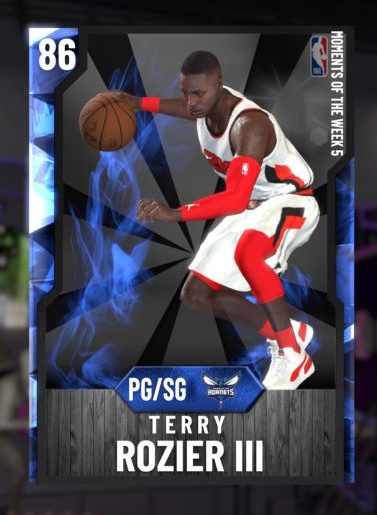 Rozier faces the same problems as Dinwiddie where there’s just so many point guards to choose from, even at the budget level, that it’s hard to stand out. He has 84 3-point shooting, 85 speed, 85 speed with the ball, 86 ball handling and 82 lateral quickness. He gets gold Quick Draw, Tight Handles and Quick First Step. Again, not bad, but I won’t be using him. 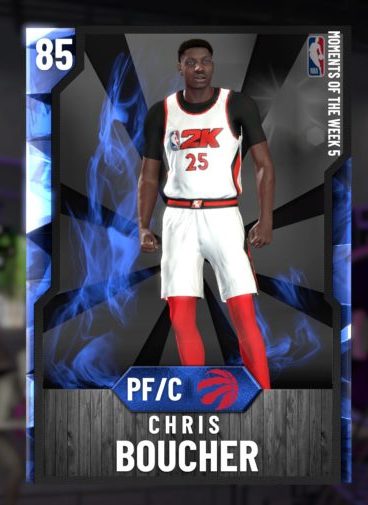 Boucher is 6-foot-10 so playing center maybe won’t work out, but he does get 80 3-point shooting to go with 84 help defense IQ, 90 offensive rebounding and 92 defensive rebounding. His speed is 66 and his athleticism is subpar, which hurts his stock a bit as well. He gets gold Pogo Stick and Rim Protector to try and make him a bit more viable on defense. 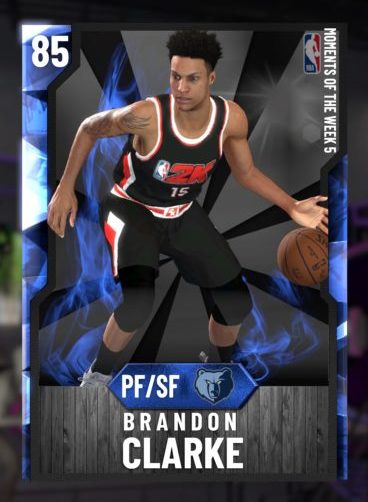 Brandon Clarke rounds out the Moments with 82 speed, 80 driving dunk, 80 standing dunk, 82 steal and 92 blocking. He gets HOF Pogo Stick. He also gets gold Quick Draw (but bad overall shooting), Lightning Reflexes, Pick Pocket, Trapper, Intimidator and Off-Ball Pest. In short, this card is a rim-running defender. He might bring some good stuff off the bench and should create some chaos on defense at 6-foot-8. Overall, I like this card more than the Boucher.

Moments of the Week 5 looks really good. Josh Richardson and De’Andre Hunter look like 3-and-D terrors, and Mitchell and Jokic should both be playable. Locking these cards in for an incredibly dangerous Zach LaVine appears to be relatively fair value, even knowing there’s going to be a whole lot of better cards coming soon.