The Legacy Series remains the ugly duckling of the MyTeam pack release schedule. Even if it’s by design meant to highlight some of the players from NBA history who are overlooked, it does leave some feeling unsatisfied. But hey, for other history buffs out there, maybe they love this stuff. Plus, using some lesser known players in MyTeam can sometimes give you a key advantage early in games when your opponent has not seen your players on other squads.

Let’s get to the cards. 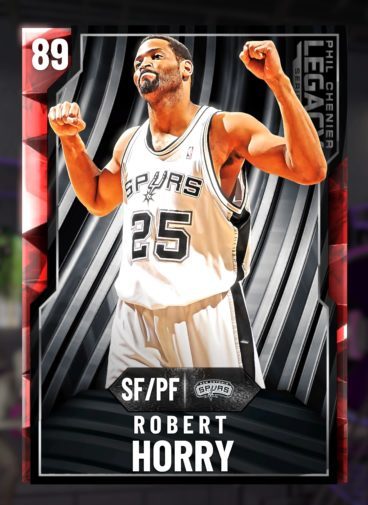 Starting with Robert Horry, we get the ruby Spurs version this go around. He has 92 mid-range, 94 3-point shooting, 85 standing dunk, 80 help defense and 81 lateral quickness. For badges, he has HOF Clutch Shooter (obviously). For gold badges, it’s Flexible Release, Catch and Shoot, Corner Specialist, Green Machine, Pick and Popper and Quick Draw.

This is about what you would expect from a late-stage Horry card. In a perfect world, you bring him in off the bench, he hits some big threes, and you get to scream out “BIG SHOT BOB!” once or twice. If all that happens, it will have been well worth the low price tag needed to acquire him in the marketplace. 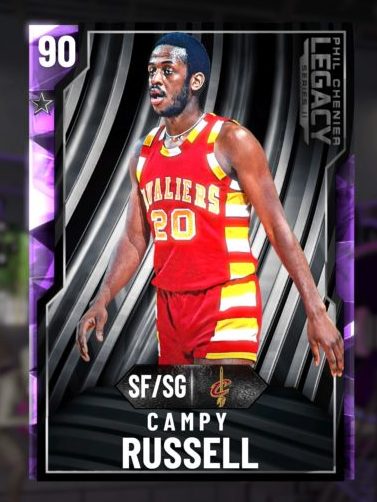 Campy Russell is the one evolution player from this set, so here is how that breaks down:

If you do these, you will take him from amethyst to diamond. For badge upgrades:

With the base version, you have 87 3-point shooting, 79 speed, 90 driving layup and 84 lateral quickness. He has gold Quick Draw, Flexible Release, Corner Specialist, Green Machine and Tireless Shooter.

As a 6-foot-8 player who can slide to SG, this is not a bad card if you evolve it. He becomes a steady defender with good size at that point. I have personally used Campy Russell in prior MyTeam modes to great success, so I may be biased here, but this seems like a really smart evolution candidate. 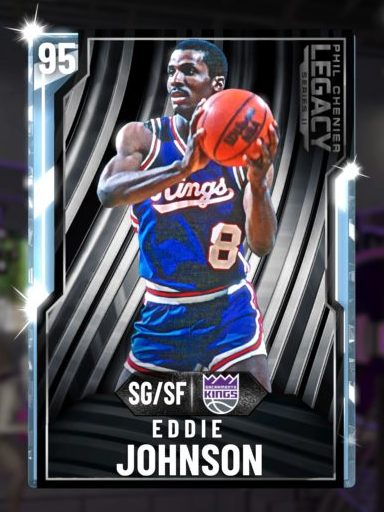 This looks like a very good card. They gave EJ better defense than I would have expected, and the offensive gifts were already a given. He will be able to straight-line drive, and also stick jumpers quite easily. However, the defense is why the card should really stand out. He’s a potential two-player who is 6-foot-7, so he has very good size for SG at the very least. 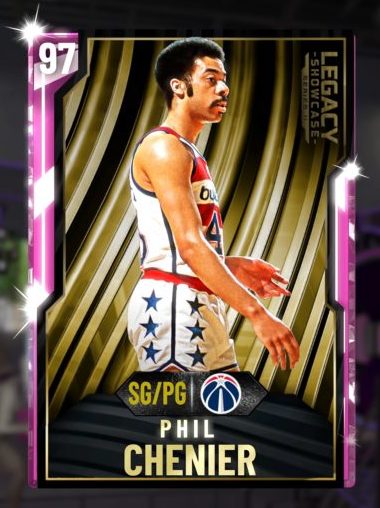 And lastly, the reward for this pack is pink diamond Phil Chenier. It’s understandable why Chenier goes overlooked, but he has received solid 2K cards in the past. Here he has 89 mid-range, 89 3-point shooting, 93 speed, 93 acceleration, 90 driving layup, 93 speed with ball, 91 ball handling, 86 perimeter defense, 85 help defense, 87 lateral quickness and 84 steal.

So here you’re getting an offense-oriented 6-foot-3 combo guard. I would try to only play him at PG, and I don’t really love any pink diamond that isn’t better as a two-way threat, but I have seen worse pink diamonds this year. (Hell, I just talked about Drexler in the last post, and he is certainly worse than this card.) Be that as it may, I don’t think this card will excite too many with the stats being offered.

The other aspect of this pack release is that it wraps up the big-time players for Legacy Series 2. I don’t think it’s really wise to lock in this sort of collection, but if you want to do it, you will secure 200 tokens, which should put some of you well on the way to galaxy opal land in the reward market. But, again, probably don’t lock in this collection since it’s still better to have an option for extra MT than tokens until we start getting new token rewards.