Let’s take a look at the cards, starting with the golds:

Redick when fully evolved will have 96 3-point shooting and 79 speed to try and offset his lackluster defense. I can’t find the information on all the badges he gains yet since the packs are so new, but he will have gold Quick Draw and at least gold Range Extender.

The biggest thing about this Asik card is apparently it was not available when 2K started the pack promotion today. It has since been fixed, but during this time some people also opened packs and got players from the Isiah Thomas Spotlight Series rather than the Howard Spotlight Series. 2K has started to hand out refunds to those who were impacted, so contact 2K Support if you were part of this group.

As for the Asik card itself, it’s bad. Let’s move on.

Steve Blake gets 84 3-point shooting and isn’t helpless on defense, but this card is only notable for not being the worst one in the set.

Courtney Lee gets gold Quick Draw, 84 3-point, 85 mid-range, 88 speed and 82 perimeter defense. Depending on how you like shooting with him, this is not a bad budget emerald.

The man, the myth, the legend has returned. After being a constant fixture in NBA 2K19, Hedo Turkoglu is back and can be evolved to an amethyst. To evolve him from ruby to amethyst, you will need to make 50 3-pointers, score 1,000 points and get 200 assists. Those are very reachable numbers. He also has gold Quick Draw so he should be as usable as ever. At the amethyst level, he gets 89 3-point shooting, 86 ball handle, 79 speed and so he can be your point-forward once again if you want. His defense and rebounding will of course be slacking, but I expect this card to be a fan favorite once again.

Jameer Nelson is the next evolution card, and he also looks like he will be very good when fully evolved. At his final evolution, he gets 93 3-point shooting, 92 speed, 92 acceleration, 84 strength, 92 speed with ball, 92 ball handling, 85 perimeter defense and 87 lateral quickness. He comes equipped with gold Quick Draw, but I can’t find info on his other badges when he’s evolved as of now.

Sapphire Marcin Gortat is up next. At 6-foot-11 he sort of loses just by default in this game because he also can’t shoot from deep and is not especially quick. So, yeah, not much to say about this card.

Ruby Chandler Parsons catches my eye as a small-ball four because I always like shooting with him. He has gold Quick Draw and Corner Specialist. In terms of attributes, he gets 88 3-point shooting, 89 mid-range and 82 ball handling. His athleticism ratings hold him back, but he should be a decent rebounder at least.

Ruby Antawn Jamison checks in with a creepy card art image and not much else. He does not have gold Quick Draw or elite outside shooting, so this card is more if you want to maybe put him at SF and post him up. I don’t think this card has much use though, and of course there’s a better Jamison card you can earn via rewards.

Amethyst Vince Carter starts off the next tier of cards. It does not have Quick Draw, and the HOF badges (Fastbreak Finisher, Lob City Finisher and Showtime) are not ideal. However, he does have mid-to-high 80 shooting stats across the board, 90 speed, 95 vertical, 92 driving layup, 94 driving dunk and 86 ball handling. The 84 lateral quickness is good enough, and so he should be a good time if you did not pick up a Vince Carter as your starter evolution player.

Harden is going to get better cards than this diamond, but this one is notable because his height was altered to 6-foot-4 either by mistake or because this card has PG eligibility. His regular SG card has Harden’s official 6-foot-5 height, and Harden was not one of the players who was “lying” about his height when the NBA had everyone re-measured, so I don’t get the discrepancy. Either way, this card is marginally better than his diamond Moments card. It has 90s across the board for outside shooting, 86 speed, 86 speed with the ball, 91 ball handling, 98 offensive consistency, and the expected defending and rebounding woes.

I repeat, you do not need this card to complete the Dwight Howard Spotlight Series challenges. That being said, Rashard Lewis is another 2K favorite. He gets HOF Catch & Shoot, Deadeye, Difficult Shots, Flexible Release, Green Machine, Tireless Shooter and Volume Shooter. He also gets gold Corner Specialist, Hot Zone Hunter, Quick Draw and Range Extender. I have not used him yet, but if his release is still like last year’s, this card will be a fan favorite once again like Hedo.

With the challenges, I don’t have information on all of them yet, but just going by the titles, I know there is a 7 block challenge, a 20 rebound challenge and a 30-30 challenge, so those could all be tricky to pull off. 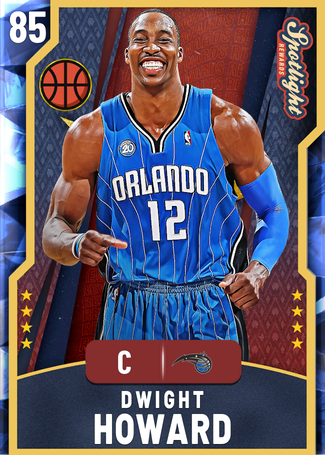 The Dwight Howard card looks good if you can evolve him all the way to pink diamond. In fact, it would be one of the best pink diamonds in the game right now. The problem is of course that it will take some time, and by the time you complete the evolution requirements, there may be better pink diamonds available. That being said, fully evolved he gets 11 HOF badges, including HOF Box, Rim Protector, Defensive Leader, Moving Truck, Backdown Punisher, Showtime, Rebound Chaser, Pogo Stick, Pick & Roller, Lob City Finisher and Post Move Lockdown. 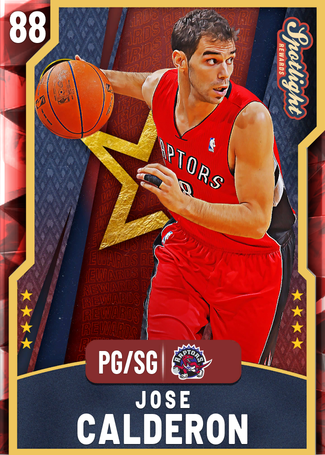 As for the reward cards, Calderon is another one of my favorites to shoot with, and he does have 92 3-point shooting and 86 ball handling. The issue is he is very slow and has putrid defense. 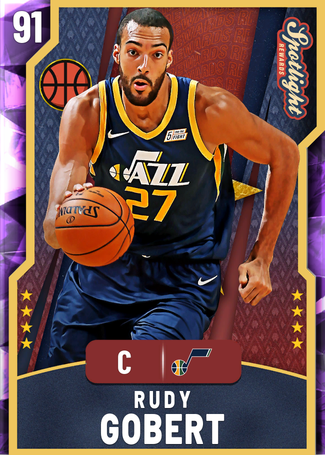 The 7-foot-1 amethyst Rudy Gobert may look promising at first glance, but he’s probably not an ideal version of Gobert. This card has 45 speed and only gets gold Rim Protector and Rebound Chaser. He has 90 interior defense, 95 pick and roll defense, 90 blocking, and 89 offensive/defensive rebounding, but he’s not quite dominant enough to slide in as a defense-only starting center.

All in all, this should be one of the cheaper Spotlight Series to complete, and if you can complete the challenges you will get pink diamond Blake Griffin: 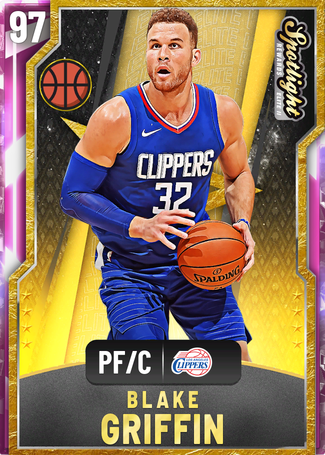 He gets 85 3-point shooting, 85 speed, 98 standing dunk, 98 driving dunk, 92 post moves, 85 interior defense, 88 blocking, 94 offensive rebounding and 95 defensive rebounding. He gets HOF Contact Finisher, Fastbreak Finisher, Lob City Finisher, Pick & Roller, Showtime, Pick & Popper, Brick Wall, Pogo Stick and Rebound Chaser. He also has gold Quick Draw, Deep Fades, Green Machine, and then silver Quick First Step. He probably does not have the defense or size to be a small-ball center, but in full-court press lineups perhaps it could work out if you want to not play him at PF.

Beyond this Dwight Howard pack, just a couple miscellaneous items to mention. There are two promo codes currently active that I have not yet mentioned in prior updates:

Time for a locker code 🔥 Use this code for guaranteed MT, up to 5000. Available for one week pic.twitter.com/OOoMEN0jYD

🚨 Locker Code. Use this code for guaranteed tokens, up to 20. Available for one week pic.twitter.com/JLUbD5Xib3

Lastly, the newest Weekly Challenges are live. This has a little more relevance for today and tonight because:

That’s all for now, thanks for reading. Also, as always, tip of the cap to 2KMTCentral and 2KGamer for info about the evolution requirements and cards themselves.