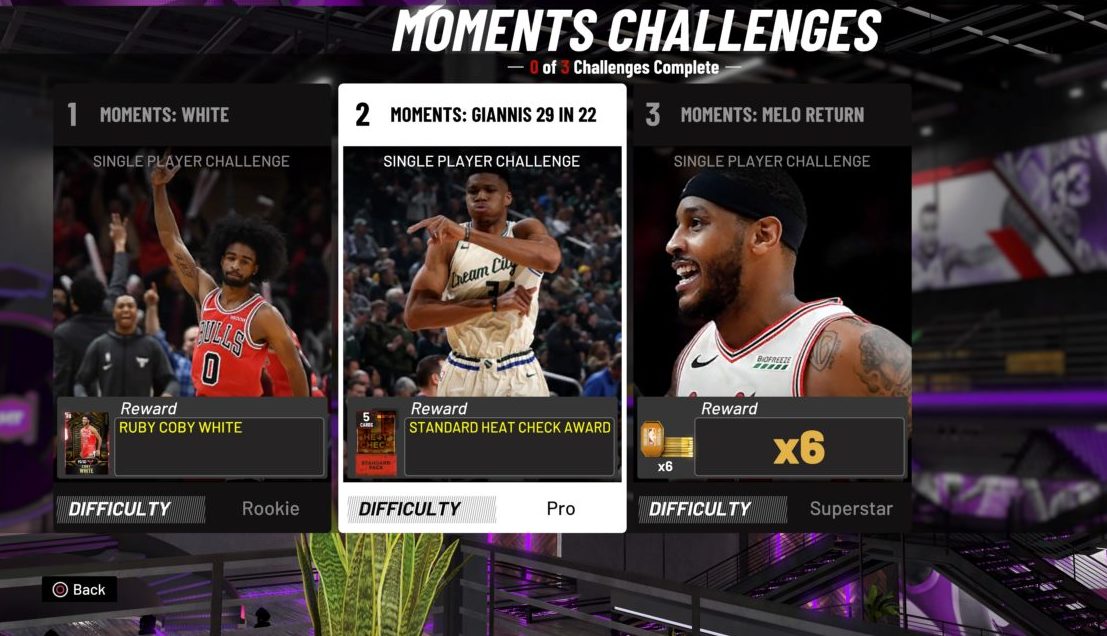 There are some new moments and challenges to go through in NBA 2K20 MyTeam. Some are offline, some are online, and some involve some old friends coming home once more.

Starting with the new 12-0 reward in MyTeam online, pink diamond Clyde Drexler is what awaits you if you can pull off that feat. It’s not the most tantalizing reward, and it seems especially odd to offer a pink diamond Drexler after having people grind out the evolution Clyde from the spotlight challenges. If you do fully evolve that version of Clyde, it’s still probably better than this one.

This is an especially weird card because the defense looks very good, but he does not get Clamps of any sort. Without that badge, he’s only so good as a perimeter defender. That trend carries out throughout the card as well. He has 8 HOF badges, but I really only care about Pogo Stick, and even that is only so helpful on a wing. This card could be great if it was tweaked a bit to have the badges line up with the ratings, but since that’s not the case, it’s not a great pink diamond overall.

Two new single-player moments are also live. The first involves mimicking our old friend Melo by scoring 30 points with any player. It is on superstar difficulty with four-minute quarters, but this should still be manageable. The 2K team has also steered away from using Moments of the Week players for these as of late, perhaps due to backlash of needing a relatively expensive card for a relatively weak reward. Here you get six tokens, which seems fair for the challenge.

The other challenge should be really straightforward as you just need to score 29 points in 16 minutes or less. Again, you can use any player, and with it being on pro difficulty, four-minute quarters is plenty enough time to knock this out with whatever cheesy player you choose. Or, just use an evolution player and knock out some stats.

Elsewhere in the online sphere, don’t forget to check that online multiplayer challenges tab every so often. Right now, there’s something I wish we would see more of for online, and that’s a specific tier of team you have to use. In this case it’s a sapphire-only squad. The win conditions for the online challenges are usually relatively generous, and this is no different with a win netting you 2.5K MT the first time you pull it off.

Do more of these 2K, please.

The other online challenge is more by the book, and it’s something the developers do a little too often with these challenges, which basically boils down to “do whatever you want and win” to get the reward. They change the level and the minutes for these challenges, but that’s about it. It’s nice that it’s six tokens as a reward — after all that’s what you get for knocking out five weekly challenge games so the reward here is solid by comparison — but these weekly online challenges should be filled with all sorts of weird stuff. I imagine they are meant to be just a nice side thing to mess around with, so really have some fun with these online challenges in the future.