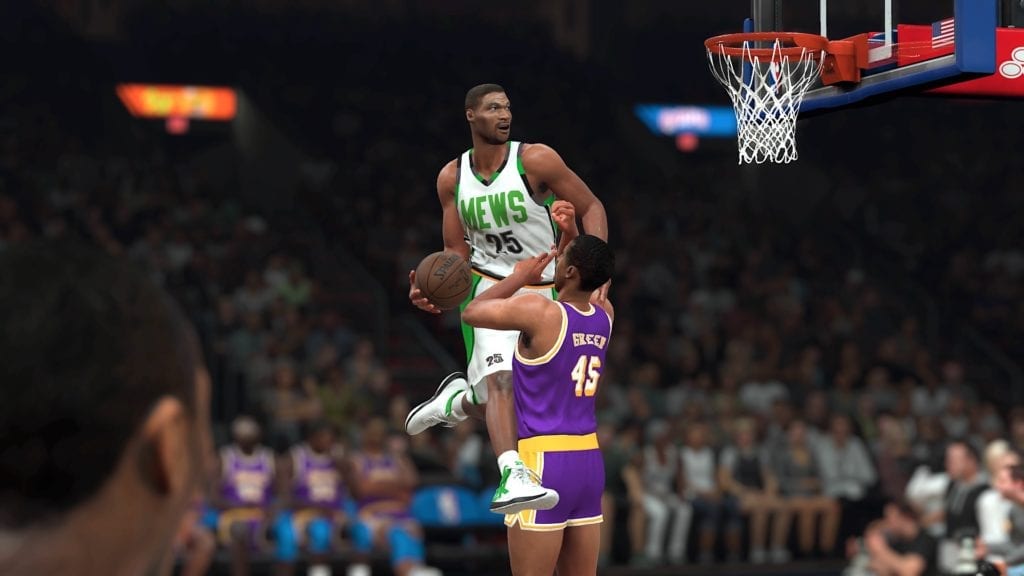 Last week I discussed being patient with collections and waiting until prices dropped for certain cards…but then I locked eyes across a crowded room with Dwight Howard. 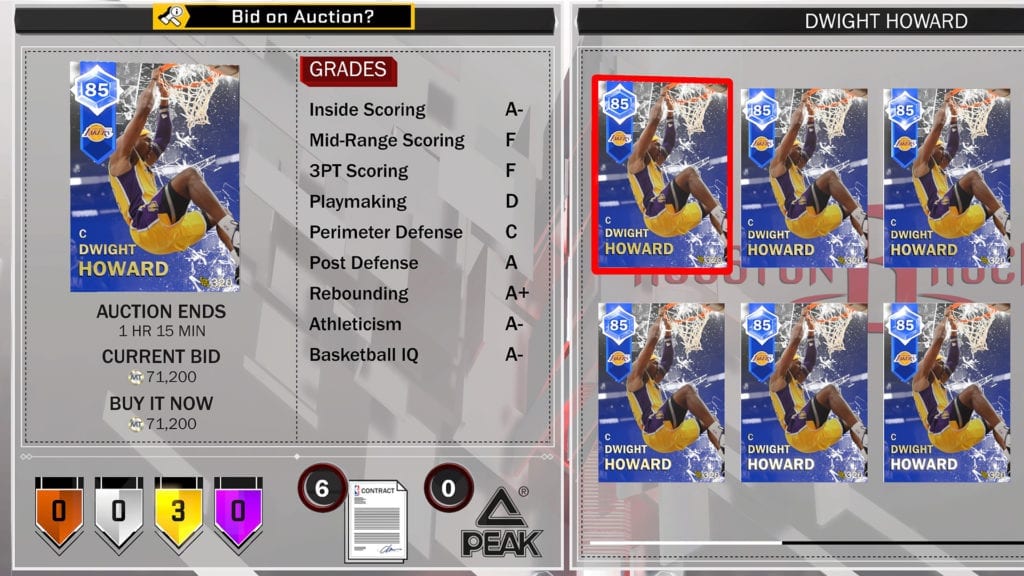 [email protected]%n. That’s a sexy card, even with the silly gold headband.

I’ve been using gold Dwight for my Seven Seconds lineup all year, and he’s been a beast on the glass and on D, especially with his dynamic duo partner, Kemba Walker. But Dwight’s Rim Rocker card is an upgrade across the board, and upon closer inspection, it has a 99 rating for the Seven Seconds system. So I decided I had to have it. Of course, I didn’t have the MT to buy it outright (or else I’m sure I would have, even though it’s going for insane amounts), so I used the rest of my VC to take a chance on a Rim Rockers box instead.

The best two cards I got were the worst two cards in the Rim Rockers collection — Jeremy Evans and Derrick Jones Jr. I put Derrick in the auction house and saw that (literally) a million other people had him too, so my return on investment: 1,000 MT.

After seeing a similar situation with Jeremy Evans, I just decided to keep him. Maybe one day I’ll try and complete the collection to get that ruby Kobe, but mainly I think having Jeremy around is important to remind me of my shame. 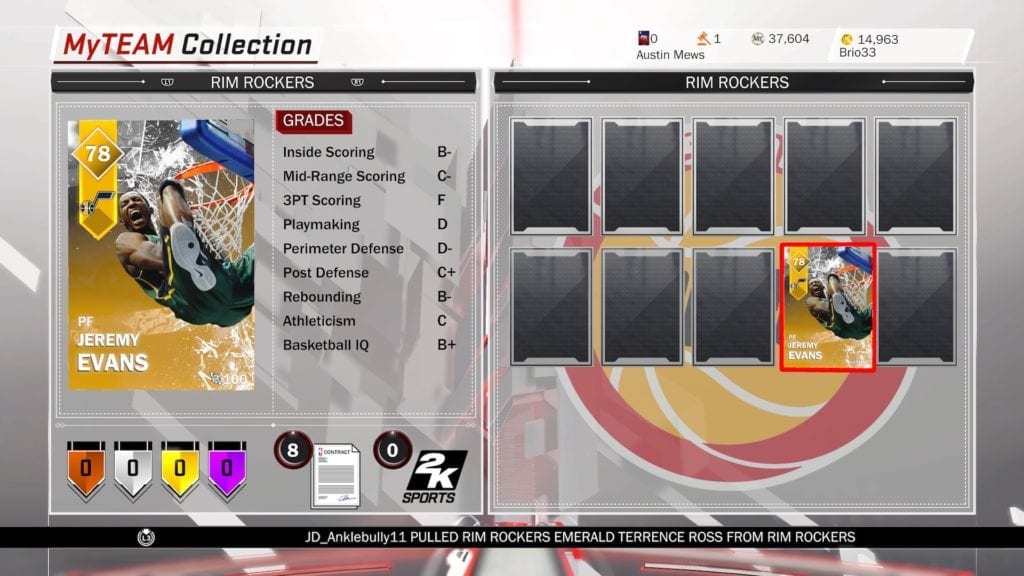 Moving on, let’s get to some new cards.

First of all, last week’s Throwback Thursday added two famous high-flying cousins — Vince Carter and Tracy McGrady. Unfortunately, Vince’s card is from his Magic days (I honestly don’t remember him ever being on the Magic), and Tracy’s is from the Raptors. With the prices they’re going for, however, one would think these cards were the peak versions of both.

The new card I’m actually most intrigued by is Alonzo Mourning: 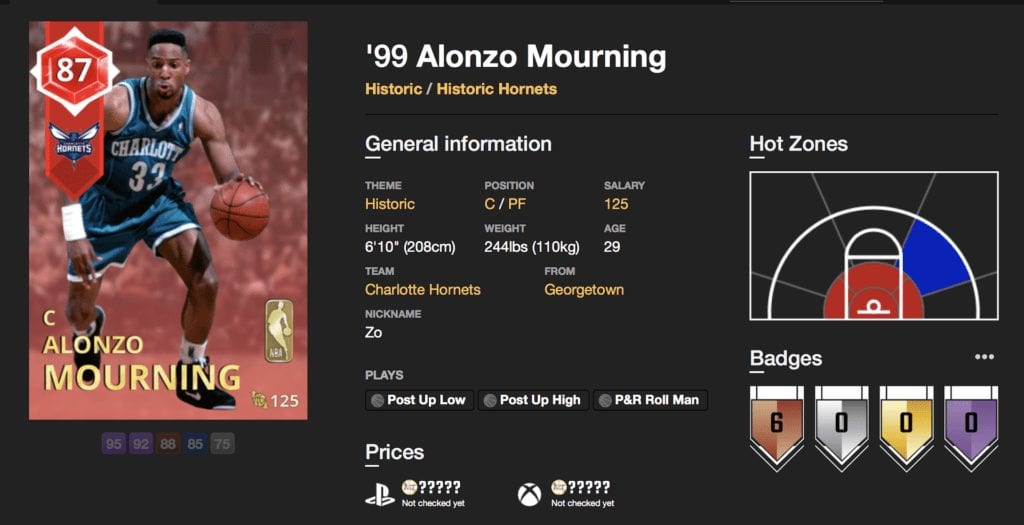 I’m still shopping for an awesome center to tide me over until amethyst Mark Eaton or Al Jefferson, and Zo looks pretty stacked for a ruby. Plus, he’s part of the Hornets historic collection, so he’s going to end up on my team one way or another. Might as well be now if I can find a reasonable deal. There’s also a new ruby Pete Maravich, so grab him if you’re a fan (and have the MT to spend). Pete has always been a fun player to control in years past.

Then we have the Opening Night pack. We’re basically getting rookie cards of some fan-favorite players who had particularly memorable opening night performances. Personally, I’m always a sucker for Sonics Kevin Durant, so even after my Rim Rocker debacle, I’ll probably still buy a couple of packs just to see if I can get lucky.

Another new card for me (and probably for a lot of you) is the sapphire Dee Brown peddled by 2K for the low, low price of five challenge tokens. After you dee-molish this week’s challenges (assuming you did the warm-up challenges too), he shall be dee-livered to your rewards queue. He is a dee-lightful dunker and can shoot the three, but I dee-oubt (I’m out of control now) he will crack my rotation in any games that count. Sorry, Dee. (Cool name, though.)

The card we’ll earn for another five challenge tokens, however, is a doozy: 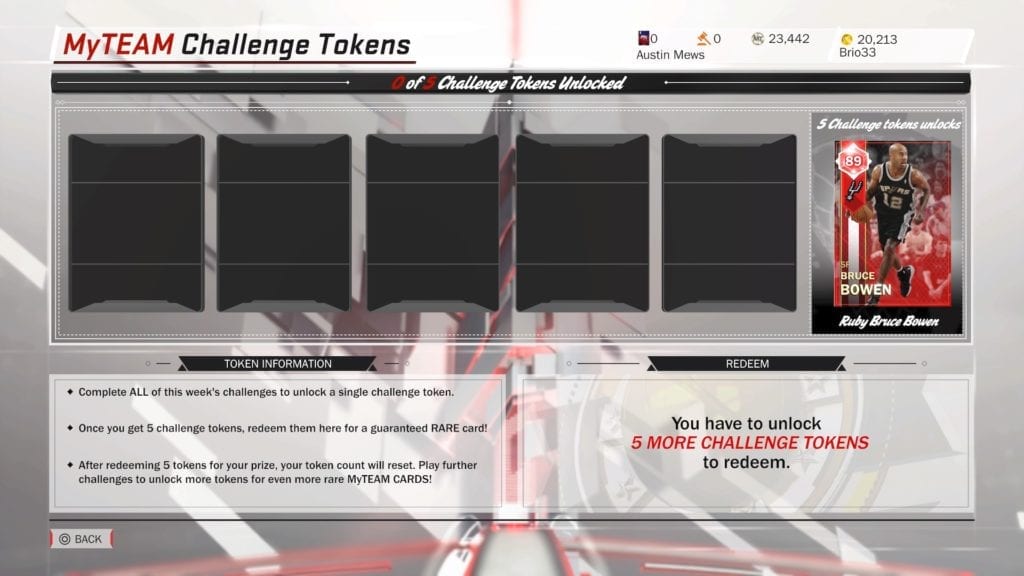 Bruce is probably the prototype 3 and D (did you just picture Dee Brown in your head? Uh huh, you’re welcome) player, and this card looks to be the perfect representation of that. I can’t wait to get it, because Bruce and Ron Artest will be an amazing small forward combo for my team going forward.

I actually just completed the Trail Blazers collection and picked up Jerome Kersey (see the cover image for evidence of his dunking prowess) because I wanted another athletic, defensive-minded backup for Ron, but alas. Enjoy the next five weeks, Jerome, because Bruce is coming to take your spot.

And finally, the most important new item of the week is: 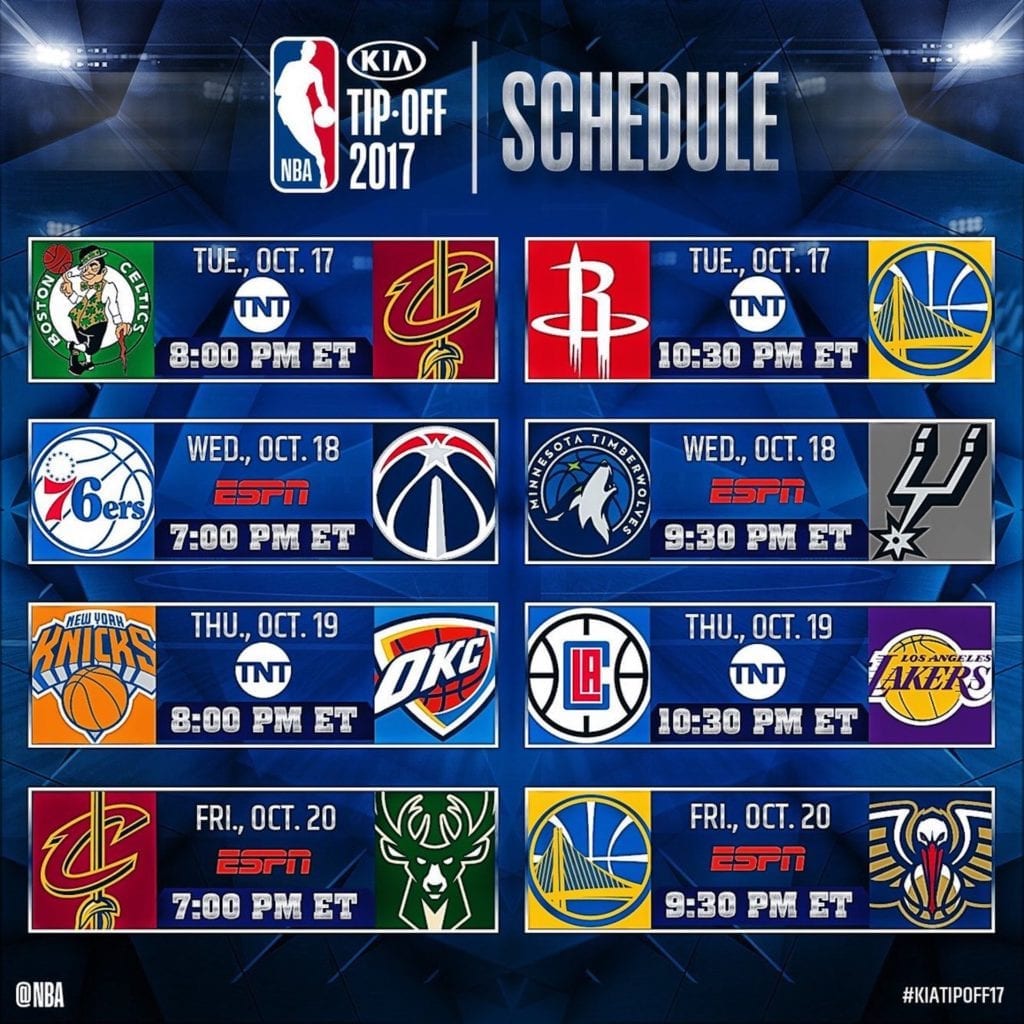 The return of NBA basketball.

It’s been a long summer, but the time has come to obsess over the actual game that this video game obsesses over re-creating in such awesome detail.